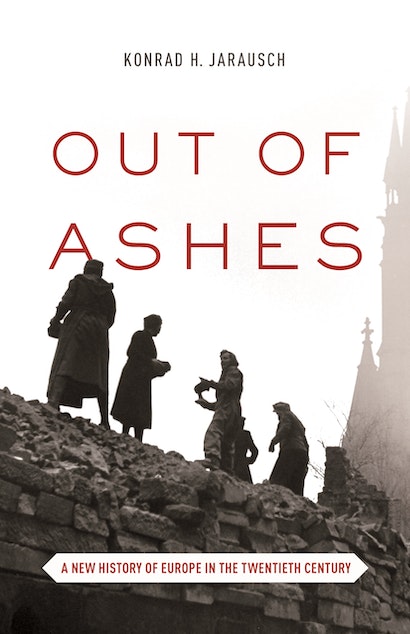 A sweeping history of twentieth-century Europe, Out of Ashes tells the story of an era of unparalleled violence and barbarity yet also of humanity, prosperity, and promise.

Konrad Jarausch describes how the European nations emerged from the nineteenth century with high hopes for continued material progress and proud of their imperial command over the globe, only to become embroiled in the bloodshed of World War I, which brought an end to their optimism and gave rise to competing democratic, communist, and fascist ideologies. He shows how the 1920s witnessed renewed hope and a flourishing of modernist art and literature, but how the decade ended in economic collapse and gave rise to a second, more devastating world war and genocide on an unprecedented scale. Jarausch further explores how Western Europe surprisingly recovered due to American help and political integration. Finally, he examines how the Cold War pushed the divided continent to the brink of nuclear annihilation, and how the unforeseen triumph of liberal capitalism came to be threatened by Islamic fundamentalism, global economic crisis, and an uncertain future.

A gripping narrative, Out of Ashes explores the paradox of the European encounter with modernity in the twentieth century, shedding new light on why it led to cataclysm, inhumanity, and self-destruction, but also social justice, democracy, and peace.

Konrad H. Jarausch is the Lurcy Professor of European Civilization at the University of North Carolina, Chapel Hill.

"[Out of Ashes] should be on the shelf of everyone seeking a panoramic, narrative guide to history's most violent century. This comprehensive history of 20th-century Europe is bound to become the standard work on its subject: a bold, major achievement."—Publishers Weekly

"All told, this magnum opus is the outstanding achievement of a scholar who is himself in his early seventies—a good age for historians. Jarausch is one of the very few who have dared to write a history of Europe covering the entire long 20th century. Strictly speaking only Mark Mazower has run this risk in the Anglophone world. Konrad Jarausch presents an original work with a consistent conception, a completely convincing narrative of its own, a high analytical grasp of the grand lines as well as of the details as well as enormous knowledge and incredible command of the literature. Based on considerable skepticism and realism [it sends] a fairly positive message for Americans and Europeans about the recent European past."—Hartmut Kaelble, H-Solz-Kult

"Jarausch has written a groundbreaking study of 20th-century European history."—Choice

"Konrad Jarausch's ambitious and sprawling new book, Out of Ashes, seems like a text for our times. . . . Jarausch examines Europe's recent past, pursuing a fundamental question—namely, what is modernization?—that connects the continent's violently ideological ‘dark times' to its postwar renewal and ambiguous future."—Commonweal

"Jarausch's book really comes into its own when dealing with the second half of the century. Here, he wonderfully pulls together various strands of the story of European integration and decolonisation, Cold War and the creation of the welfare state, deindustrialisation and globalisation."—Srinath Raghavan, Open Magazine

"Out of Ashes is the magnum opus of an outstanding scholar. Konrad Jarausch narrates the rise, fall, and rebirth of Europe in the twentieth century as an unparalleled drama full of dark sides and catastrophes, but also of progress and hope. He makes the study of European history an intellectual adventure again."—Jürgen Kocka, Free University of Berlin

"Europe's Faustian bargain is the subject of Konrad Jarausch's authoritative new history of Europe. This is a history of the groundswell of material progress—from science and technology to production and consumption—and the inability to master it. The failure to meet these challenges spiraled into a devastating politics of destruction in the First and Second World Wars that was stopped only at the cost of a Cold War. Would the collapse of 1989 jump-start a new and more modest European order in a global world? Out of Ashes points to the lessons learned as well as to the current predicaments Europe faces."—Michael Geyer, University of Chicago

"This is a well-written, well-organized, and detailed study of a notoriously difficult subject: Europe in the twentieth century. Jarausch deftly guides readers through the important developments that led through two wars to our unstable present."—John Connelly, author of From Enemy to Brother: The Revolution in Catholic Teaching on the Jews, 1933-1965

"Out of Ashes is an extremely well-conceived and highly ambitious book. What Jarausch has pulled off is a fully balanced, elegantly integrated history of a long twentieth century in which the pre-1914 era and the post-1989 years are vital parts of the interpretation."—Peter Fritzsche, author of Life and Death in the Third Reich

"This book is a sweeping study of twentieth-century European history, read through the lens of multiple modernities. Written by one of the leading lights of modern German and European history, Out of Ashes has the power to stake its place as a volume of truly lasting value."—Belinda J. Davis, author of Home Fires Burning: Food, Politics, and Everyday Life in World War I Berlin