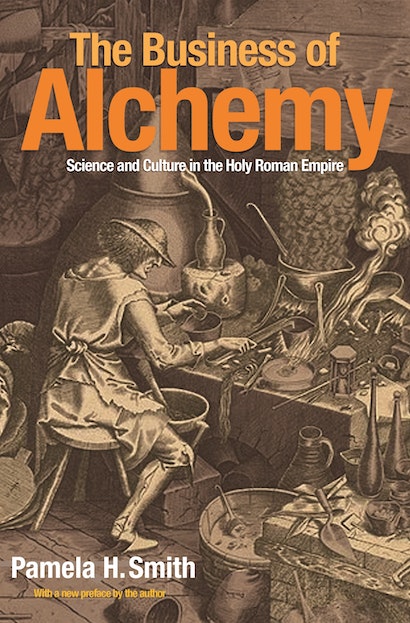 In The Business of Alchemy, Pamela Smith explores the relationships among alchemy, the court, and commerce in order to illuminate the cultural history of the Holy Roman Empire in the sixteenth and seventeenth centuries. In showing how an overriding concern with religious salvation was transformed into a concentration on material increase and economic policies, Smith depicts the rise of modern science and early capitalism. In pursuing this narrative, she focuses on that ideal prey of the cultural historian, an intellectual of the second rank whose career and ideas typify those of a generation. Smith follows the career of Johann Joachim Becher (1635-1682) from university to court, his projects from New World colonies to an old-world Pansophic Panopticon, and his ideas from alchemy to economics. Teasing out the many meanings of alchemy for Becher and his contemporaries, she argues that it provided Becher with not only a direct key to power over nature but also a language by which he could convince his princely patrons that their power too must rest on liquid wealth.


Agrarian society regarded merchants with suspicion as the nonproductive exploiters of others’ labor; however, territorial princes turned to commerce for revenue as the cost of maintaining the state increased. Placing Becher’s career in its social and intellectual context, Smith shows how he attempted to help his patrons assimilate commercial values into noble court culture and to understand the production of surplus capital as natural and legitimate. With emphasis on the practices of natural philosophy and extensive use of archival materials, Smith brings alive the moment of cultural transformation in which science and the modern state emerged.

Pamela H. Smith is the Seth Low Professor of History and Director of the Center for Science and Society at Columbia University.

"Smith has written an incisive and intelligent study which, together with affording a wealth of fascinating archival material, provides an original and well researched overview of the rise of early capitalism and modern science. Most importantly, she has given us an insight into one of the roles of alchemy in the workings of the Holy Roman Empire in the seventeenth century."—Lyndy Abraham, Parergon

"A fine study of the relation between alchemy and commerce in the German-speaking lands of the later seventeenth century. . . ."—Simon Schaffer, London Review of Books

"Spirited and fascinating. . . . This blending of the modern with the traditional, this seamless knitting of commerce with princely extravagance, alchemy with science, commerce, and industry, stands as the major achievement of Smith's portrait of intellectual life in the late-seventeenth-century Hapsburg territories."—Margaret C. Jacob, American Historical Review

"No one has described with such authority and with the career of one of those projectors who haunted the courts of late Renaissance and Baroque Europe like so many Pied Pipers, offering philosophers' stones and irresistible weapons to any monarch who would offer them an open ear trumpet. Pamela Smith's book, in short, is fascinating, elegant, and incisive."—Anthony Grafton, Princeton University