A compelling intellectual and literary history of midcentury America 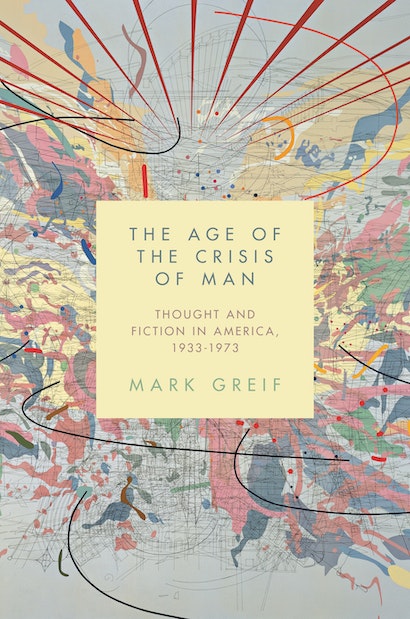 In a midcentury American cultural episode forgotten today, intellectuals of all schools shared a belief that human nature was under threat. The immediate result was a glut of dense, abstract books on the “nature of man.” But the dawning “age of the crisis of man,” as Mark Greif calls it, was far more than a historical curiosity. In this ambitious intellectual and literary history, Greif recovers this lost line of thought to show how it influenced society, politics, and culture before, during, and long after World War II.

During the 1930s and 1940s, fears of the barbarization of humanity energized New York intellectuals, Chicago protoconservatives, European Jewish émigrés, and native-born bohemians to seek “re-enlightenment,” a new philosophical account of human nature and history. After the war this effort diffused, leading to a rebirth of modern human rights and a new power for the literary arts.

By the 1960s, the idea of “universal man” gave way to moral antihumanism, as new sensibilities and social movements transformed what had come before. Greif’s reframing of a foundational debate takes us beyond old antagonisms into a new future, and gives a prehistory to the fractures of our own era.

Mark Greif is associate professor of literary studies at the New School. He is a founder and editor of the journal n+1.

"An important book, a brilliant book, an exasperating book. . . . In The Age of the Crisis of Man: Thought and Fiction in America, 1933-1973, the gifted essayist Mark Greif, who reveals himself to be also a skillful historian of ideas, charts the history of the 20th-century reckonings with the definition of 'man.'"—Leon Wieseltier, New York Times Book Review

"In careful, thoughtful, and elegant prose reminiscent of Lionel Trilling and Edmund Wilson, Greif gives a brilliant exploration of the philosophical field that developed in the middle decades of the 20th century and echoes even up to our own time. . . . Greif's dazzling, must read analysis offers luminous insights into midcentury American understandings of humanity and its relevance to the present."—Publishers Weekly

"Bracingly ambitious. . . . [He is] a stimulating literary critic."—Pankaj Mishra, London Review of Books

"I will not insult [Mark] Greif by calling him a public intellectual. He is an intellectual, full-stop. . . . An intellectual is not an academic who can write plain or a journalist who can write smart, but something else altogether. . . . Greif's history turns out to be a prehistory—our prehistory."—William Deresiewicz, Harper's

"[The Age of the Crisis of Man is] a brilliant contribution to the history of ideas, one of the rare books that reshapes the present by reinterpreting the past."—Adam Kirsch, Tablet

"[E]xhilarating. . . .By 'the discourse of man' Greif means the vast midcentury literature on human dignity, from Being and Nothingness, to the 'Family of Man' photo exhibition, to the Universal Declaration of Human Rights—a discourse that Greif interrogates with verve, erudition, sympathy, and suspicion, and that he follows into the fiction of our time."—Lorin Stein, Paris Review

"It is encouraging to come across the work of a young scholar that offers clear-eyed insight into the origins of the current malaise, while also exemplifying what a fresh contribution to humanistic study might look like today. . . . [A]mbitious and deeply researched."—Christopher Benfey, New York Review of Books

"[W]ith this brilliant book Greif is restarting the project of 're-enlightenment,' pointing us toward . . . the spiritual daylight of the present—where literary purposes and political agendas are moments on an intellectual continuum, not the terms of an either/or choice."—James Livingston, Bookforum

"A striking construction, bringing together an array of thinkers and intellectual traditions whose synchronicity has gone largely unremarked."—David Simspon, New Left Review

"Sometimes a work of cultural history surprises and enlightens simply by naming what we had not thought required a name. [Such is] Mark Greif's revelatory study of mid-20th -century humanism."—Brian Dillon, Guardian

"A stunning intellectual history of the 20th century. . . . [W]hat this book really offers is a new way of thinking about thinking, and the particular thinking that fiction can do."—Adam Thirlwell, Wall Street Journal

"[O]ne of the most accessibly intelligent and provocative looks at a fascinating period in American intellectual life. Read it, if only for Greif's exploration of white Americans' appropriation of the phrase 'The Man.' But also read it for so much more; it will stay with you for a long time."—Kristin Iversen, Brooklyn Magazine

"[G]reat detail, buttressed with deep research, presented with great analytic and synthetic skill. . . . Unlike many scholars, he has a heart and isn't afraid to show it."—Alan Jacobs, Books & Culture (Christianity Today)

"The Age of the Crisis of Man is an unusual book. It stands out in part fo the grandiosity o f its ambitions: Greif tries to provide an expansive new framework for the midcentury trajectory of American ideas. . . . A founding editor of n+1, he aims to mine the texts of an earlier generation for social philosophies that can serve the political needs of the present day."—Angus Burgin, Dissent

"[I]lluminating of the intellectual situation Greif and all of us inhabit. . . . Greif's conclusion: . . . know your past, for sure; know that people have tried things that didn't pan out; know your way about contemporary theory, but wear that knowledge lightly; and, most of all, remain playful."—Kevin Mattson, Boston Review

"The mastery on display here—the sheer diversity of thinkers explored—is staggering. Some of them will no doubt be familiar to you: Adorno, Jaspers, Foucault, Arendt. Others might prove a little fuzzier: Mortimer Adler, Shulamith Firestone, Sidney Hook. All are deftly woven into the fabric of crisis discourse—both the juicy rivalries and strange bedfellows—often with dazzling results. . . . A tour de force."—Dustin Illingworth, Brooklyn Rail

"Mark Greif's probing new book, The Age of the Crisis of Man, . . . allows us to see intellectual culture repeating what are easy to identify, looking back, as hopelessly circular or reductive debates. Greif does a fine job, and a gentle one, describing this."—Christopher Nealon, Public Books

"[A] learned exploration of an important debate, which still reverberates in many forms."—Francesca Wade, Prospect

"[The Age of the Crisis of Man] works to uncover a major discourse in American letters, a largely postwar dialogue about the human (or posthuman) condition. It's a formidable project on Greif's part, one that could change the story we tell about intellectual politics in the 20th century."—Jonathan Sturgeon, Flavorwire

"[A]n ambitious look at political thought in the 20th century, and how that thought was reflected in the work of several notable American writers. . . . [W]hat emerges is a complex portrait of a literary culture, and the theories that informed it."—Tobias Carroll, Vol. 1 Brooklyn

"[F]ascinating and rich. . . . The strength of the book is that although I disagree with much of what he says about the general position his readings of the novelists are engaging, lucid, attractively fresh and critically astute. So if you disagree with my views you should still read the book, and if you agree with me you should too."—Richard Marshall, 3AM Magazine

"After reading Greif, one begins to wonder how we could have overlooked what was hiding in plain sight. . . . Greif's book shows just how engaging it can be to glimpse philosophy in its human setting and view fiction as an agent of thought."—Patrick Redding, Society for U.S. Intellectual History Blog

"A welcome work that belongs on the bookshelf of anyone who is serious about understanding twentieth-century thought and culture."—Daniel Wickberg, Society for U.S. Intellectual History Blog

"Essayistic in style, brimming with wit and erudition, the book is sui generis in its take on Anglo-American analytical philosophy and human science, demonstrating that ours is by no means a ‘unique' nor a ‘uniquely bad time.'"—Adriana Neagu, ABC Journal

"Greif is undoubtedly right to suggest that ‘crisis' was a key theme, and his deft analysis of that theme offers an important correction to the persistent notion that the mid-century was the golden age of technocracy. . . . [O]ne finds in Greif's book spirited, smart, and often surprising explorations of the thought of the period."—Daniel Immerwahr, Modern Intellectual History

"Mark Greif's hugely impressive The Age of the Crisis of Man . . . is dense, original and authoritative."—Robert Macfarlane, New Statesman

"Greif approaches what could be a dry historical subject with a fiction writer's flair for character and narrative pacing, and his inventiveness and sense of wonder never subside. It's a great work of criticism about the idea of greatness, and where we get such ideas."—Evan Kindley, Slate

"Mark Greif's ambitious study offers a compellingly nuanced and nonetheless comprehensive historical narrative of the inception and ensuing evolution of a crisis discourse which has proven to be instrumental in shaping the intellectual landscape of the United States through several decades."—Péter Csató, Hungarian Journal of English and American Studies

"Mark Greif's original and compelling history of the 'crisis of man' shows how important this debate was not just to American intellectual life in the middle of the twentieth century, but to the postmodernity that was to follow, and to theoretical questions that still engage us. Through a series of dazzling readings, Greif shows that literature, not theory or philosophy, provided by far the best analyses of the problem of the nature and future of 'man.' Anyone interested in theories of human rights and the posthuman, in the constant tug of war between universalism and difference, or in the relationship between literature and philosophy should read this book."—Toril Moi, Duke University

"This book offers more than a fine history of midcentury intellectual life. A set of ideas that have long seemed deader than the paper they are printed on are given, not credence, but a thrilling sense of energy and urgency. The strength of the conceptual framework lets one see how the restless ghosts of the 'age of the crisis of man' have been keeping us company all along. Against the odds, Greif's account provides us with new tools for understanding our present, when the category of the human has never seemed a less reliable beacon to the making of a better world."—Mark McGurl, author of The Program Era: Postwar Fiction and the Rise of Creative Writing

"Mark Greif is one of my favorite contemporary essayists, and it's a pleasure to read his analysis of a time of change so fundamental to our culture and artworks today. This is a brilliant history of midcentury American (and European) thought. His writing is witty, profound, and able to change the inner landscape of anyone who encounters it."—Sheila Heti, author of How Should a Person Be?

"An utterly surprising prehistory of our present, and one of the best imaginable roadmaps to the intellectual and literary geography of the last seventy years."—Elaine Scarry, Harvard University

"This is a substantial, even brilliant, contribution to the literary history of midcentury America. Mark Greif is a bold, idea-intensive critic."—David A. Hollinger, author of After Cloven Tongues of Fire: Protestant Liberalism in Modern American History

"One shouldn't use the word ‘masterpiece' promiscuously, but this is a truly valuable excavation and explanation of a puzzling phase of twentieth-century culture that has been not only buried but largely forgotten. Mark Greif's writing is utterly straightforward, and the book is limpidly researched, smartly argued, and, in case after case, stunningly right, as it sheds new light on the crucial middle decades of the century. I was riveted from start to finish."—Morris Dickstein, author of Dancing in the Dark: A Cultural History of the Great Depression

"This excellent book offers an original view of midcentury U.S. intellectual and literary history, making a compelling case for a forgotten but pivotal episode: the debate about the 'crisis of man.' Mark Greif elegantly shows how this debate came to shape postwar politics and fiction. His discussions of Hemingway, Faulkner, Bellow, Ellison, O'Connor, and Pynchon are brilliantly illuminating."—Sean McCann, Wesleyan University