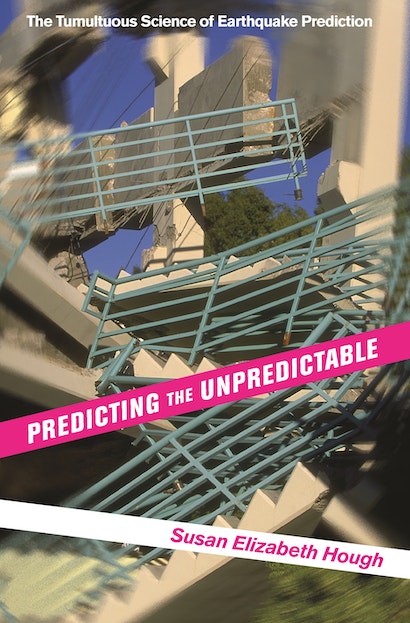 An earthquake can strike without warning and wreak horrific destruction and death, whether it’s the catastrophic 2010 quake that took a devastating toll on the island nation of Haiti or a future great earthquake on the San Andreas Fault in California, which scientists know is inevitable. Yet despite rapid advances in earthquake science, seismologists still can’t predict when the Big One will hit. Predicting the Unpredictable explains why, exploring the fact and fiction behind the science—and pseudoscience—of earthquake prediction.

Susan Hough traces the continuing quest by seismologists to forecast the time, location, and magnitude of future quakes. She brings readers into the laboratory and out into the field—describing attempts that have raised hopes only to collapse under scrutiny, as well as approaches that seem to hold future promise. She also ventures to the fringes of pseudoscience to consider ideas outside the scientific mainstream. An entertaining and accessible foray into the world of earthquake prediction, Predicting the Unpredictable illuminates the unique challenges of predicting earthquakes.

Susan Elizabeth Hough is a seismologist with the Southern California Earthquake Center and a fellow of the American Geophysical Union. Her books include Richter's Scale and Earthshaking Science (both Princeton).

"Susan Hough's book about earthquake prediction reminds us that many respectable scientists and numerous nutcases have tried—and failed. Predicting the Unpredictable tells us what has been tested and abandoned and why. It follows the winding path taken by this potentially useful discipline in the past four decades, from the shadows to centre stage and back again. . . . Famous moments in earthquake prediction are dissected for the reader through Hough's diligent research in obscure archives; history will thank her for these abandoned threads."—Roger Bilham, Nature

"Hough's book, however, is not frustrating at all; it offers an enlightening, fair and insightful look at how one science has dealt with the intersection of an extremely hard problem with legitimate public demands for results. Those of us in other fields who read it may find ourselves profiting from the example someday."—Cosma Shalizi, American Scientist

"Susan Hough is all about solid science, and her examples of accepted research that turned out to be dead wrong will resonate with readers suspicious of anybody who predicts the future."—Stephen Matchett, Australian

"Earthquake prediction is on everybody's mind when reports of the horrific event make headlines. Why the failure to predict it, especially in this age of scientific and technological achievements? Hough tells readers why in this deeply interesting, enlightening, and entertaining book. . . . The book skillfully weaves the influence of politics, economics, and psychology into this authentic, delightfully perceptive account of earthquake prediction science."—Choice

"[T]his book can be enjoyed by anyone, but it will be enjoyed most by seismologists because it is a treasure of seismological lore, as well as a useful guide and moral support for those participating in what Susan calls the 'combat sport' of seismic prediction research."—F. A. Nava, Pure and Applied Geophysics

"This book is sparkling, entertaining, and a good read and . . . it is a rocking piece of literature. It keeps a delicate balance between the genuine scientific efforts and the difficulties, which scientists face in prediction science."—Afroz A. Shah, Geosciences Journal

"Very well-written. . . . I would recommend this volume to anyone interested in the search for the elusive scheme for predicting earthquakes."—Patrick Taylor, The Leading Edge

"Sue Hough, in fine style, has written a fascinating history of one of the most vexing problems in science. Anyone who has ever wondered why geophysicists can't predict earthquakes should read this book."—Thomas H. Jordan, director of the Southern California Earthquake Center

"Irresistible optimism, exciting drama, scientific puzzles, risky investments, outright fraud, wise and wacky characters. Why does earthquake prediction attract them like no other science? And what about triumphant success? Susan Hough tells the story in this balanced, well-crafted, readable, and compelling book. I recommend it for anyone, especially those bold enough to enter the field."—David D. Jackson, University of California, Los Angeles

"A new book on earthquake prediction written by an accomplished seismologist is long overdue. There is something in Hough's book for everyone—from the nonspecialist with a general interest in the topic to the earthquake scientist looking for new perspectives and a bit of insider history. This is a book that is, quite literally, hard to put down."—Greg Beroza, Stanford University

"In this well-written account, Hough examines the elusive and controversial question of short-term earthquake prediction. Those living in quake-prone areas simply want to know when scientists will be able to predict the next (big) one. Hough's excellent account provides context and insight into why this seemingly straightforward question has both fascinated and frustrated researchers for so many decades."—Mark Zoback, Stanford University

"A highly entertaining and accurate book. As Predicting the Unpredictable makes clear, cutting-edge science is often untestable in the short term because the data have been pushed as far as possible and beyond, and because the research is often conducted by scientists guided by intuition."—John Vidale, University of Washington

"This book is significant and new. Hough's research into the history of earthquake prediction—its difficulties, efforts made, and errors committed—is well done. I don't think there are any competing books on the market."—Max Wyss, director of the World Agency of Planetary Monitoring and Earthquake Risk Reduction