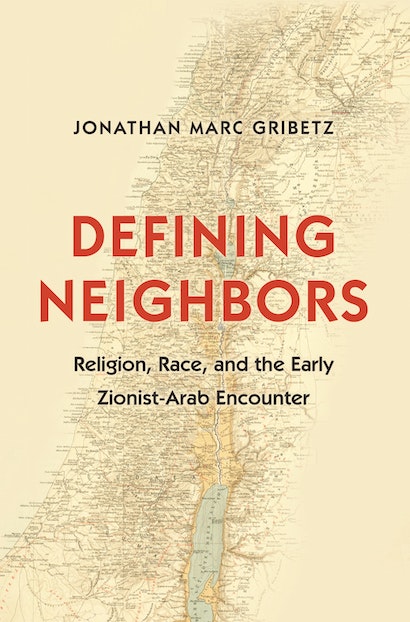 As the Israeli-Palestinian conflict persists, aspiring peacemakers continue to search for the precise territorial dividing line that will satisfy both Israeli and Palestinian nationalist demands. The prevailing view assumes that this struggle is nothing more than a dispute over real estate. Defining Neighbors boldly challenges this view, shedding new light on how Zionists and Arabs understood each other in the earliest years of Zionist settlement in Palestine and suggesting that the current singular focus on boundaries misses key elements of the conflict.

Drawing on archival documents as well as newspapers and other print media from the final decades of Ottoman rule, Jonathan Gribetz argues that Zionists and Arabs in pre–World War I Palestine and the broader Middle East did not think of one another or interpret each other’s actions primarily in terms of territory or nationalism. Rather, they tended to view their neighbors in religious terms—as Jews, Christians, or Muslims—or as members of “scientifically” defined races—Jewish, Arab, Semitic, or otherwise. Gribetz shows how these communities perceived one another, not as strangers vying for possession of a land that each regarded as exclusively their own, but rather as deeply familiar, if at times mythologized or distorted, others. Overturning conventional wisdom about the origins of the Israeli-Palestinian conflict, Gribetz demonstrates how the seemingly intractable nationalist contest in Israel and Palestine was, at its start, conceived of in very different terms.

Courageous and deeply compelling, Defining Neighbors is a landmark book that fundamentally recasts our understanding of the modern Jewish-Arab encounter and of the Middle East conflict today.

Jonathan Marc Gribetz is assistant professor of Near Eastern studies and Judaic studies at Princeton University.

"[F]ortuitously for readers, Gribertz's work contextualize(s) a present-day shift toward religious rhetoric, symbols, and organizations in the conflict. He shows that religion was once central for Jews and Arabs seeking to understand each other, and that nationality is in fact a latecomer to that encounter. But more importantly, he shows that a religious encounter need not mean a holy war."—Raphael Magarik, Haaretz

"An essential contribution to the growing conversation."—Noah Haiduc-Dale, H-Net Reviews

"In the ever-growing and highly saturated field of Arab-Israeli conflict studies, it is rare for a book to break new ground and challenge long-held and well-entrenched perceptions. This is one of those rare exceptions."—Choice

"[A] field-changing new book. . . . Indeed, such a sensitive treatment of historical texts, in light of multiple political contexts, geographic frames, and religious and cultural discourses should serve as a model for many historians working to interpret, categorize, and contextualize the texts they encounter—and for all those who study how changing circumstances change the terms of discourse and lead to mutual understanding or misunderstanding."—Jewish History

"Gribetz's fascinating book makes a major contribution to the literature on early Zionist-Arab encounters, in particular, and to the intellectual history of late Ottoman Palestine and the Levant, more generally."—AJS Review

"This book is a truly extraordinary scholarly accomplishment. From this point forward, anybody who wants to understand the origins of the Arab-Israeli conflict will not be able to do so without consulting Gribetz's work."—Israel Gershoni, coeditor of Rethinking Nationalism in the Arab Middle East

"Drawing on prodigious research in a range of sources in Arabic, Hebrew, and other languages, Gribetz examines two groups—Jews and Arabs—whose national identities were developing simultaneously in Palestine around the turn of the twentieth century. He provides a broad and sympathetic portrait of the multiple ways both groups understood and fashioned these identities, which are rarely studied in tandem."—Rashid Khalidi, author of Brokers of Deceit: How the U.S. Has Undermined Peace in the Middle East

"In this meticulously researched book, Gribetz offers a fresh look at early relations between Zionists and Arabs in Palestine. Examining what he terms their 'textual conversation,' he highlights the role of religion and race in the development of mutual perceptions. The British used religion to separate the communities; race could have served to break down barriers of identity. Gribetz reminds us that the way people understand each other is not fixed or immutable."—Ambassador (Ret.) Daniel Kurtzer, Princeton University

"In this erudite and engaging work, Jonathan Gribetz shows how racial and religious categories could unite as well as divide Jews and Arabs in early-twentieth-century Palestine. Gribetz offers close, insightful readings of Jewish and Arab intellectuals who imagined themselves as neighbors as well as adversaries, and who, while producing apologetic depictions of their own cultures, communicated in a shared cultural language. This book is a fascinating recovery of neglected voices that are strikingly relevant for our own time."—Derek J. Penslar, author of Jews and the Military: A History

"Gribetz has written a compelling narrative that will undoubtedly become the authoritative account of Zionist-Arab interactions during the final decades of the Ottoman Empire. He offers not only original interpretations but also a deep engagement with an era essential for understanding the reasons why the Israeli-Palestinian conflict has long endured. What Gribetz accomplishes as a historian is quite remarkable."—Donna Robinson Divine, author of Exiled in the Homeland: Zionism and the Return to Mandate Palestine

"The encounter between Jewish and Arab thinkers in Ottoman Palestine was subtler than we know. Jonathan Gribetz cannot redo the past, but his brilliant study of their mutual understanding gives us new language to use in this conversation going forward. An indispensable work."—Ruth R. Wisse, Harvard University