How the New Deal was a unique historical moment and what this reveals about U.S. politics, economics, and culture 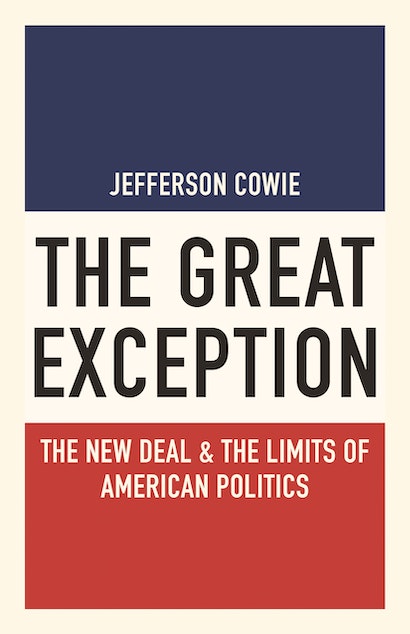 Where does the New Deal fit in the big picture of American history? What does it mean for us today? What happened to the economic equality it once engendered? In The Great Exception, Jefferson Cowie provides new answers to these important questions. In the period between the Great Depression and the 1970s, he argues, the United States government achieved a unique level of equality, using its considerable resources on behalf of working Americans in ways that it had not before and has not since. If there is to be a comparable battle for collective economic rights today, Cowie argues, it needs to build on an understanding of the unique political foundation for the New Deal. Anyone who wants to come to terms with the politics of inequality in the United States will need to read The Great Exception.

Jefferson Cowie is the James G. Stahlman Professor of History at Vanderbilt University. He is the author of Stayin' Alive: The 1970s and the Last Days of the Working Class. His work has also appeared in such publications as the New York Times, the New Republic, and the Chronicle of Higher Education.

"One of the year's most important political books."—E.J. Dione Jr., Washington Post

"Cowie—like the best work of the mid-century historian Richard Hofstadter, whom he frequently cites—has written not so much a work of American history as a brilliant meditation about a central dilemma of American history."—In These Times

"Jefferson Cowie offers a grand interpretation of the road blocks to change. . . . A rich survey, studded with insights culled from a generation of scholarship."—Michael Kazin, , Bookforum

"Cowie sings the achievements of the New Deal in a tragic register, emphasizing its transformative power while lingering on its compromises. . . . Cowie's vision is coherent and arresting, and helps to make sense of recurring puzzles in American political experience. As a literary-intellectual posture, moreover, his fatalism is downright infectious."—Democracy

"A fresh, original look at a perennial historical conundrum."—Roger Biles, Annals of Iowa

"It is bound to become a staple for teaching and understanding modern political, and especially working-class, history."—Oscar Winber, History

"Jefferson Cowie's The Great Exception is a brilliant contribution to the understanding of American politics. Cowie makes the case that the halcyon era of liberalism, from Roosevelt to Kennedy, was an outlier—and that the victories of Reagan and Gingrich were not revolutions but restorations. A must-read."—Thomas B. Edsall, New York Times political columnist

"The Great Exception is exceptionally brilliant in casting light on our contemporary struggle with plutocracy. Jefferson Cowie explains why a New Deal type of labor law reform is no longer in the cards. If a labor movement is to come back, it will have to find another way. Let us be grateful for so deft an elucidation of our post-New Deal gridlock."—Thomas Geoghegan, author of Only One Thing Can Save Us: Why America Needs a New Kind of Labor Movement

"With impressive brevity, clarity, and eloquence, Jefferson Cowie offers up a challenge to almost all previous New Deal scholarship that cannot be ignored or wished away. His insights will be disconcerting to many. But this seminal work of historical analysis should inspire historians, journalists, and political activists to rethink America's recent past and, even more so, its present and future."—Eric Alterman, columnist for The Nation and author of The Cause: The Fight for American Liberalism from Franklin Roosevelt to Barack Obama

"Linking the past and present in an arresting way, Cowie urges us to see the New Deal and the postwar liberal era not as the rule but as the exception. This book will cause both academics and the interested public to sit up and take notice. I predict that it will become a key book in modern American history."—Edward D. Berkowitz, George Washington University