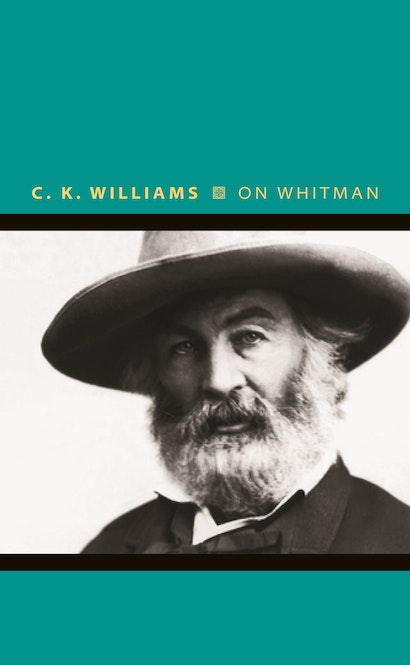 In this book, Pulitzer Prize–winning poet C. K. Williams sets aside the mass of biography and literary criticism that has accumulated around Walt Whitman and attempts to go back to Leaves of Grass as he first encountered it—to explore why Whitman’s epic “continues to inspire and sometimes daunt” him. The result is a personal reassessment and appreciation of one master poet by another, as well as an unconventional and brilliant introduction to Whitman. Beautifully written and rich with insight, this is a book that refreshes our ability to see Whitman in all his power.

"Whitman, the great New York poet, cries out for evangelization, not explication. Accordingly, in this sweet slip of a book, Williams, himself an eminent poet, lets Walt speak freely, filling many pages with favorite passages, most frequently from the original ‘Leaves of Grass,' of 1855. Williams's own prose is chatty and loose, dipping into big categories like ‘Nature' and ‘America' with the casualness of a Sunday social call."—Leo Carey, New Yorker

"One can see why C.K. Williams, a poet of wide-ranging curiosity and distinctive verbal 'music,' might have been drawn to write an introduction to Whitman. In his use of long, flowing lines—sometimes so long that his publishers have adopted unusually wide pages to accommodate them—Williams can seem to be an heir to Whitman's own poetic practice. There are times in his book on Whitman when Williams confides something that he knows as a poet."—Christopher Benfey, New York Review of Books

"On Whitmanis an admirable homage to a poet without whom C. K. Williams himself would not write as he does."—Stephen Burt, , New Republic

"On Whitman is revelatory when it comes to explaining Whitman's poetic gifts. With generous quotations from Leaves of Grass, Williams returns us to Whitman's music, his remarkable fusion of language and song. . . . On Whitman is not simply a personal tribute to Williams' great forerunner. The book rethinks the ways the 'good gray poet' established a language and an identity for future poets."—David Haven Blake, Philadelphia Inquirer

"Now, C. K. Williams has written a book on Whitman, and it arrives not a moment too soon. . . . In On Whitman, Williams takes an approach that's more innovative than it sounds: he keeps his focus on the poems. He wants to strip away the heavy theorizing and layers of biography that have accrued around his fellow poet. Williams's aim is to restore the strangeness and power he encountered when, at age 16, he made a Whitman anthology his first poetry purchase. 'For a young poet, reading Whitman is sheer revelation, sheer wonder, a delight bordering on then plunging into disbelief. How could all this come to pass?' His slender book offers a convincing answer."—Jeremy McCarter, Newsweek

"On Whitman is a small, excellent look at the greatest poet that the United States has produced to date. . . . If you really don't know Whitman's poetry, except for a poem or two you encountered in high school or college, Williams is a gracious, welcoming guide. Even if you are already an avid reader, he is still apt to renew your wonder about the work. Williams knows he isn't able to explain how Whitman became the poet he did, any more than his biographers. But he is able to describe what makes his poetry great, and so readable, as well as anyone."—Robert Pincus, San Diego Union-Tribune

"This little book is almost a book of devotion, so moved is the author, himself a poet, as he reads and re-reads Whitman. He writes that Whitman 'was the most spiritually perfect human being who ever lived.' His almost intimate reflections make this book a delight to read. Readers who think they know Whitman will learn much from C.K. Williams."—Charles Stephen, Lincoln Journal Star

"An estimable poet in his own right, C.K. Williams has written an accessible, short study of Walt Whitman's poetry. Part of a writers-on-writers series recently launched by Princeton University Press, On Whitman is a slight book, an appreciative meditation rather than a critical study. Williams helps readers see Whitman's genius, especially his intuitive grasp of the existential and metaphysical demands of a radically democratic culture."—R.R. Reno, First Things

"The acclaimed poet C. K. Williams celebrates the energy, legacy, and artistry of Walt Whitman with astute and exuberantly abundant recourse to the bard's free and formidable verse."—Barnes and Noble Review

"Williams invites us to hop on as he takes us on an exhilarating ride through Whitman's poetry."—Ed Folsom, Walt Whitman Quarterly Review

"C.K. Williams, a contemporary poet, writes succinctly yet compendiously of his predecessor and model's sprawling verse, and conveys a refreshing candid enthusiasm so different from the current criticism that reproves poets for failing to match their critics' acuity."—John E. Alvis, Claremont Review of Books

"This is the exuberant, true book of a poet, of two poets: a personal, illuminating, and beautiful demonstration of the truest reading."—Robert Pinsky

"C. K. Williams captures Whitman with the impassioned erudition and discernment that only a master poet can deploy. Yet what's perhaps most remarkable is how it feels as if Williams has somehow captured our 'private' Whitman as well, the Whitman who has vivified every American writer and reader after him. Through Williams's electric, intimate encounter with the work and life of the 'lovely old man,' we feel that we are poetically partaking of Whitman's genius and soul in this inspiring, enlivening, and unexpectedly moving volume."—Chang-rae Lee, author of Native Speaker

"Respondez! Respondez! is what Walt Whitman demands of his readers, and C. K. Williams has responded indeed. With a poet's own astonishment and delight, imagining what it must have been like for Whitman to experience out of the blue the 'stupendous, relentless surge of poetic music' that made Leaves of Grass possible, Williams deals happily with Whitman's hugeness and his intimacy, his sexuality and his metaphysics, his equal celebrations of life and death, and his gigantic role in our literary history—but above all with 'the sheer, ever amazing power of the poems themselves.' On Whitman is a book written with infectious joy, and will bring joy to its readers."—Alicia Ostriker, author of Dancing at the Devil's Party: Essays on Poetry, Politics, and the Erotic

"C. K. Williams is widely regarded as one of our most Whitmanesque poets. Now he offers his reflections on a lifetime of reading his great predecessor. On Whitman is elegant, witty, and unfailingly illuminating. It seems certain to become one of the handful of essential books about Whitman."—Michael Robertson, author of Worshipping Walt: The Whitman Disciples