The power and properties of numbers, from basic addition and sums of squares to cutting-edge theory 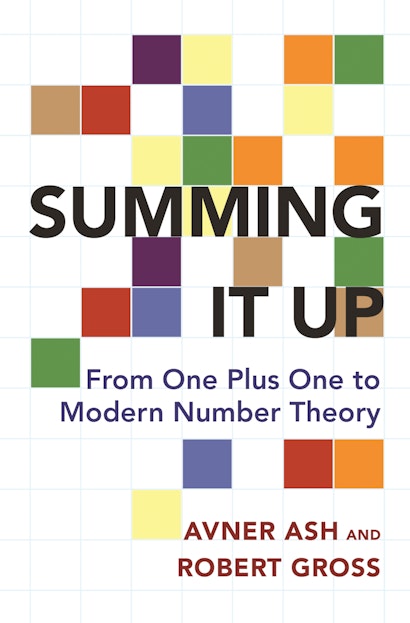 We use addition on a daily basis—yet how many of us stop to truly consider the enormous and remarkable ramifications of this mathematical activity? Summing It Up uses addition as a springboard to present a fascinating and accessible look at numbers and number theory, and how we apply beautiful numerical properties to answer math problems. Mathematicians Avner Ash and Robert Gross explore addition’s most basic characteristics as well as the addition of squares and other powers before moving onward to infinite series, modular forms, and issues at the forefront of current mathematical research.

Ash and Gross tailor their succinct and engaging investigations for math enthusiasts of all backgrounds. Employing college algebra, the first part of the book examines such questions as, can all positive numbers be written as a sum of four perfect squares? The second section of the book incorporates calculus and examines infinite series—long sums that can only be defined by the concept of limit, as in the example of 1+1/2+1/4+…=? With the help of some group theory and geometry, the third section ties together the first two parts of the book through a discussion of modular forms—the analytic functions on the upper half-plane of the complex numbers that have growth and transformation properties. Ash and Gross show how modular forms are indispensable in modern number theory, for example in the proof of Fermat’s Last Theorem.

Appropriate for numbers novices as well as college math majors, Summing It Up delves into mathematics that will enlighten anyone fascinated by numbers.

"Offers a clear and beautiful progression from addition to modern number theory."—Math-Blog

"The authors did a remarkable job in making some aspects of modern number theory very accessible to readers with only a minimal knowledge of mathematics, say a student who had a first calculus course. However, also mathematicians who do not have number theory as their main focus will enjoy this book."—Adhemar Bultheel, European Mathematical Society

"Ash and Gross do a masterful job of leading students from finite sums to modular forms and to the forefront of modern number theory. . . . This is an excellent piece of mathematical writing."—Choice

"[A]n accessible and fun introduction to modular forms. . . . [Summing It Up] is engaging and conversational, without losing accuracy or essential rigor."—Dominic Lanphier, American Mathematical Monthly

"Summing It Up uses addition as a springboard to present a fascinating and accessible look at numbers and number theory, and how we apply beautiful numerical properties to answer math problems. . . . Ash and Gross tailor their succinct and engaging investigations for math enthusiasts of all backgrounds."—L'Enseignement Mathematique

"Readers of the books [Fearless Symmetry and Elliptic Tales] will not need this review to be talked into buying 'Summing it Up by the same authors, Avner Ash and Robert Gross. . . . Like the other volumes it takes the readers on a guided tour through parts of modern number theory by starting with very elementary notions."—Franz Lemmermeyer, Zentralblatt MATH

"With their customary charm and characteristic panache, the authors manage mostly to be clear and precise without being pedantic. . . . There is no doubt that a conscientious [reader] will gain real understanding of the many topics being discussed."—Peter Shiu, Mathematical Gazette

"In Summing It Up, Ash and Gross, with their customary charm and clarity, build an impressive tower from the most basic mathematical story imaginable. They start by adding up finite sequences and whole numbers before journeying to the upper reaches of contemporary developments in number theory."—Jordan Ellenberg, author of How Not to Be Wrong: The Power of Mathematical Thinking

"With joy and reflection,Summing It Up encourages readers to work alongside the authors to engage in simple computations with profound implications. It progresses elegantly to an insightful discussion of the ideas behind the classical theory of modular forms. A wonderful book."—Barry Mazur, Harvard University

"This book takes general readers on a journey from simple addition to the modern theory of modular forms. Plentiful and accurate references are available for interested readers who want to look up further information."—Xiaoheng Wang, Princeton University

"In Summing It Up, Ash and Gross are erudite and meticulous—they write with care and precision. Their book adopts the voice of a wise elder telling math stories to precocious children. It will interest readers of all ages who seek a window into current mathematics."—Kenneth Ribet, University of California, Berkeley

"Summing It Up ambitiously presents concepts of number theory, from the elementary to the advanced, for readers with only a knowledge of high school math and some calculus. With a crisp yet conversational style and excellent examples, Ash and Gross explain a great amount of interesting and important math."—James Pommersheim, coauthor of Number Theory: A Lively Introduction with Proofs, Applications, and Stories

"A well-motivated and fun introduction to some very deep topics in mathematics, Summing It Up takes readers on a mathematics tour starting with very classical material and building towards some amazing recent work, with many highlights along the way. It can be read by those with many different levels of mathematical background. I thoroughly enjoyed it."—Nathan Kaplan, University of California, Irvine