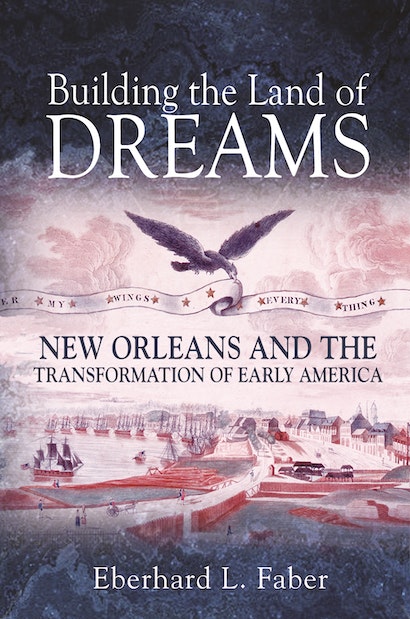 In 1795, New Orleans was a sleepy outpost at the edge of Spain’s American empire. By the 1820s, it was teeming with life, its levees packed with cotton and sugar. New Orleans had become the unquestioned urban capital of the antebellum South. Looking at this remarkable period filled with ideological struggle, class politics, and powerful personalities, Building the Land of Dreams is the narrative biography of a fascinating city at the most crucial turning point in its history.

Eberhard Faber tells the vivid story of how American rule forced New Orleans through a vast transition: from the ordered colonial world of hierarchy and subordination to the fluid, unpredictable chaos of democratic capitalism. The change in authority, from imperial Spain to Jeffersonian America, transformed everything. As the city’s diverse people struggled over the terms of the transition, they built the foundations of a dynamic, contentious hybrid metropolis. Faber describes the vital individuals who played a role in New Orleans history: from the wealthy creole planters who dreaded the influx of revolutionary ideas, to the American arrivistes who combined idealistic visions of a new republican society with selfish dreams of quick plantation fortunes, to Thomas Jefferson himself, whose powerful democratic vision for Louisiana eventually conflicted with his equally strong sense of realpolitik and desire to strengthen the American union.

Revealing how New Orleans was formed by America’s greatest impulses and ambitions, Building the Land of Dreams is an inspired exploration of one of the world’s most iconic cities.

"Multicultural New Orleans maintains a mystique that stems from its unique development under governments of France, Spain, and Thomas Jefferson's U.S., argues musician-turned-history teacher Faber in this remarkable and thorough history."—Publishers Weekly

"This well-researched snapshot of a brief period of the city's lengthy history richly details personalities and events, offering a valuable perspective to history students and anyone who has experienced the Crescent City's vibrant ways of life."—Library Journal

"Faber explains how exotic New Orleans became somewhat less exotic after the Louisiana Purchase. . . . The author also provides information about the powerful individuals who were part of the transition."—Choice

"An original and complex analysis of New Orleans during that transformative period in its history and details the political and economic integration of the city into Jeffersonian America. . . . This book effectively presents an important, and hopefully provocative, historical, geographical, and political argument: the histories and geographies of New Orleans and the early United States are inseparable. Whatever their differences, compromises and common interests generally prevailed."—Case Watkins, Journal of Historical Geography

"This book . . . joins a formidable scholarship on political re-imaginings following the Louisiana Purchase. . . . [Building the Land of Dreams] shows an intimate sensitivity to chronology, tracing the ways events communicated with each other on tight timelines. . . . Ultimately, Building the Land of Dreams highlights the ways New Orleans and the early American republic entered the antebellum period in tandem, informing one another on issues of slavery, expansionism, and national identity."—Kristin Condotta Lee, Register of the Kentucky Historical Society

"In Building the Land of Dreams: New Orleans and the Transformation of Early America, Eberhard L. Faber has significantly improved our understanding of the complexity of early national Louisiana."—Michael K. Beauchamp, H-Net Reviews

"In this brilliant book, Eberhard Faber reveals how the creole elite of colonial New Orleans adapted to American rule on their own terms. With thorough research and vivid prose, Building the Land of Dreams illuminates American expansion in exciting new ways."—Alan Taylor, author of The Internal Enemy: Slavery and War in Virginia, 1772–1832

"This outstanding book takes up a large and absorbing story: Louisiana's incorporation into the American Union as a constitutional equal with other states. Faber untangles this intricate history with admirable clarity and lots of good judgment. In his sensitive hands a cast of characters ranging from Spanish dons and creole warhorses to American newcomers comes to life. Building the Land of Dreams is a fine work of distinction."—Lawrence N. Powell, Tulane University

"Imaginatively researched and elegantly written, this book puts stubborn ideas about early nineteenth-century New Orleans to rest and alters our understanding of Jeffersonian America in a significant way. It introduces readers to intriguing personalities and stories, and undertakes a new interpretation of the incorporation of New Orleans into the economy and body politic of the United States. This is a landmark book on the history of the early American republic."—Daniel H. Usner, Vanderbilt University

"Building the Land of Dreams presents the history of New Orleans and its environs from the end of Spanish rule to after statehood in 1812, from frontier outpost to one of the United States' most populous and thriving cities. This important book is filled with considerable primary research and advances a number of significant debates."—Robert L. Paquette, Alexander Hamilton Institute