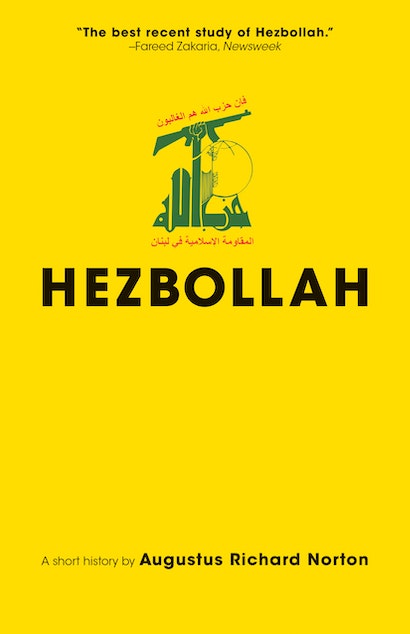 With Hezbollah’s entry into the Lebanese government in 2009 and forceful intervention in the Syrian civil war, the potent Shi‘i political and military organization continues to play an enormous role in the Middle East. A hybrid of militia, political party, and social services and public works provider, the group is the most powerful player in Lebanon. Policymakers in the United States and Israel usually denounce Hezbollah as a dangerous terrorist organization and refuse to engage with it, yet even its adversaries need to contend with its durability and resilient popular support. Augustus Richard Norton’s incisive account stands as the most lucid, informed, and balanced analysis of Hezbollah yet written—and this expanded and fully updated third edition features a new prologue and conclusion and two new chapters largely devoted to the group’s recent activities, including its involvement in Syria. Hezbollah is a work of perennial importance and remains essential reading for anyone who wants to understand the Middle East.

Augustus Richard Norton is professor of international relations and anthropology at Boston University and a fellow of the Oxford Centre for Islamic Studies. A former U.S. Army officer and West Point professor, he has conducted research in Lebanon for more than three decades.

"In this remarkably thorough, articulate portrait of Hezbollah, Norton . . . analyzes how the organization was formed, how it evolved and its current role in Lebanese politics."—Publishers Weekly

"Augustus Richard Norton's timely Hezbollah chronicles [a] dramatic evolution and its sweeping implications for the region and beyond. His lucid primer is the first serious reappraisal of the radical Shiite group since [the 2006] war shattered six years of relative calm on one of the world's most volatile frontiers."—Jonathan Finer, Washington Post Book World

"Norton, who has been studying Lebanon, and especially the Lebanese Shiites, for longer than Hezbollah has been in existence . . . offers here a brisk and balanced history . . . of Hezbollah while situating the party in the larger Lebanese and regional contexts."—L. Carl Brown, Foreign Affairs

"Augustus Richard Norton, an American academic and former U.S. army officer, has studied that Islamic fundamentalist organization since its formation. And now, in Hezbollah . . . he offers a cogent analysis of its emergence and impact on Lebanese politics."—Sheldon Kirsher, Canadian Jewish News

"This excellent short history of Hezbollah . . . demonstrates that dismissing it as a 'terrorist organization' is both glib and dishonest. . . . . Everyone who wants to understand the complexities of the Middle East, and particularly those of Lebanon and Israel, and wants to reach the truth beyond the political rhetoric, should read this book."—Bruce Elder, Sydney Morning Herald

"How do you classify and develop policy toward an organization that has committed acts of terrorism in the past, that currently provides important social services . . . that defends its country from occupation . . . that plays by the rules in official Lebanese national politics? . . . Norton elucidates these domestic and international complexities in Hezbollah: A Short History. . . With other similarly complex organizations on the rise, such as Hamas in Palestine, Norton provides a model of how we might begin to think through their multidimensional, seemingly contradictory natures."—Allen McDuffee, In These Times

"In his new book Hezbollah, Augustus Richard Norton . . . provides a succinct account of the group's rise from the chaos created by Israel's invasions and occupation of Lebanon in the late 1970s and early 1980s, which ended only in 2000. Mr. Norton also explores the origins and political orientation of the group, now led by the Shiite cleric Hasan Nasrallah, in a complex web of religious and political identities in Lebanon—with a special emphasis on the role of Shia Islam in the organization."—Richard Byrne, Chronicle of Higher Education

"The most fluent survey of Hezbollah to date. This extremely accessible yet scholarly read covers the Lebanese resistance group from its inception to the current Lebanese political crisis, aided by a collection of poignant photographs and maps."—Margeret Hall, Washington Report on Middle East Affairs

"The many complex and often changing dimensions of Hezbollah are presented in the book in a clear, concise manner that allows for a more accurate and complete understanding of what the group represents and aspires to achieve. . . . Wherever one may stand on this spectrum of views, a vital starting point—offered in this small but rich volume—is an accurate, comprehensive view of why Hizbullah has succeeded as a political party, a sectarian representational group, a social services agency, and a resistance force, and why it continues to generate so much opposition at the same time."—Rami G. Khouri, Daily Star

"In an easily read, easily comprehended book, Norton traces the origins and history of Hezbollah.... The twisting allegiances of the players, the role of Syria and other neighboring states, the emergence of discord and sectarianism as the young movement matured and began to intrude on the elected government, all take place in the pressure cooker of a land and people long torn, used by factions for their own purposes."—Suzi Brozman, Atlanta Jewish Times

"In this highly informative, jargon-free book, Norton, one of America's top experts in Lebanese politics, provides an objective account of the genesis and development of Hezbollah, explaining its central role in contemporary Lebanon."—Choice

"The book is a must read for anyone wanting to have an idea of the Lebanese puzzle and the role played in it by one of the most interesting political actors emerging in the Middle East."—International Spectator

"A good, concise survey by a perceptive student of the Lebanese Shia."—David Gardner, Financial Times

"A dedicated researcher and writer, Norton has contacts all across Lebanon who are both his friends and informants. He writes with the same fluency about Shi'a religious customs as he does about Lebanese politics. The book comes with advance praise from scholars who tell us Norton has written an accessible and balanced account of a movement poorly understood by many in the United States who too often view the Middle East through the 'terrorist' lens."—Donna Robinson Divine, Democratiya

"The book is a dynamic and multifaceted account. . . . Overall, Norton's book balances international political factors with the local and regional conditions that shaped the outlook and activities of Hezbollah. Norton deserves praise for writing an insightful and multilayered work accessible to a wide and often uninformed readership."—Rula Abisaab, Journal of Palestine Studies

"Norton's work is essential for those more concerned with an approach that rejects the rhetoric of the 'war on terror.' His historical and social analysis of Hezbollah's origin and subsequent evolution into its current manifestation is as objective an analysis as one can hope for—not to mention timely and fascinating."—Michael Teague, Al Jadid Magazine

"Few scholars are as qualified to situate Hezbollah in local, regional, and socio-religious contexts as Augustus Richard Norton."—Joel Gordon, Journal of Military History

"[T]his new edition of Norton's book is probably the best introduction to Hezbollah for a general reader, or even college students. The author cannot be accused of writing apologetically about the party because he does not shy away from dealing with Hezbollah's practice and ideology of violence. Amid the intense and ongoing propaganda surrounding Hezbollah, this short volume succeeds in rising above the passions of the debate."—As'ad AbuKhalil, Journal of Palestine Studies

"Hezbollah is a timely and landmark work. Richard Norton draws on his extensive expertise to offer a comprehensive history that will be of interest to anyone who seeks a better understanding of Hezbollah, Lebanon, or current developments in the Middle East."—Lee Hamilton, Vice Chair of the 9/11 Commission and Co-Chair of the Iraq Study Group

"One of the most remarkable developments in the Middle East in recent years is Hezbollah's meteoric rise to power. No one can better explain the broad implications of this phenomenon than Richard Norton. Drawing on his vast knowledge of Lebanon, Norton has written a timely and readable primer that lucidly explains the intricacies of Hezbollah's ideology and history and demystifies its political strategy."—Vali Nasr, author of The Shia Revival: How Conflicts within Islam Will Shape the Future

"Norton is uniquely positioned to provide an analysis of Hezbollah, one that is historical, nuanced, and informed by more than twenty-five years of experience as a researcher and policy advisor on Lebanon. He is one of the foremost American experts on Hezbollah and Shi'i politics in Lebanon. In addition, Norton's writing is always clear and accessible. This concise and accurate primer will be invaluable to general readers, reporters, and scholars."—Lara Deeb, author of An Enchanted Modern: Gender and Public Piety in Shi'i Lebanon

"I recommend this book with greatest enthusiasm. Norton is one of the premier—if not the premier—American authorities on Shi'i politics in Lebanon. Add to this the fact that he is a talented writer who can communicate complex ideas in a fluent, engaging, and accessible fashion. Telling quotes and anecdotes enliven the book and ground it. Norton is the rare academic whose expertise doesn't prevent him from communicating well with a general reader."—Eva Bellin, Hunter College, City University of New York

"This excellent short history of Hezbollah . . . demonstrates that dismissing it as a ‘terrorist organization' is both glib and dishonest. . . . . Everyone who wants to understand the complexities of the Middle East, and particularly those of Lebanon and Israel, and wants to reach the truth beyond the political rhetoric, should read this book."—Jørgen Jensehaugen, Journal of Peace Research

"The many complex and often changing dimensions of Hezbollah are presented in the book in a clear, concise manner." —Rami G. Khouri, Daily Star