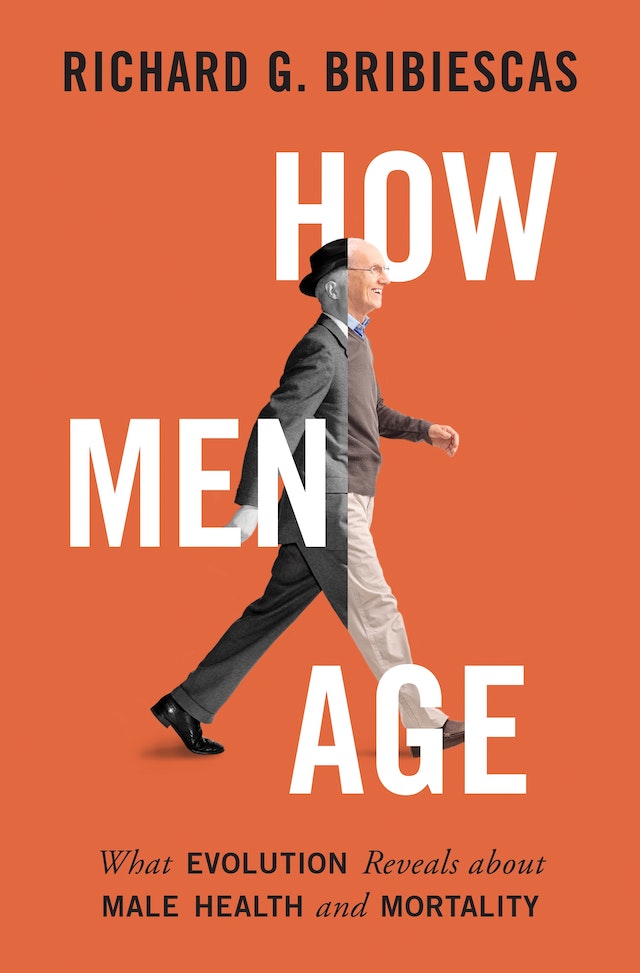 While the health of aging men has been a focus of biomedical research for years, evolutionary biology has not been part of the conversation—until now. How Men Age is the first book to explore how natural selection has shaped male aging, how evolutionary theory can inform our understanding of male health and well-being, and how older men may have contributed to the evolution of some of the very traits that make us human.

In this informative and entertaining book, renowned biological anthropologist Richard Bribiescas looks at all aspects of male aging through an evolutionary lens. He describes how the challenges males faced in their evolutionary past influenced how they age today, and shows how this unique evolutionary history helps explain common aspects of male aging such as prostate disease, loss of muscle mass, changes in testosterone levels, increases in fat, erectile dysfunction, baldness, and shorter life spans than women. Bribiescas reveals how many of the physical and behavioral changes that we negatively associate with male aging may have actually facilitated the emergence of positive traits that have helped make humans so successful as a species, including parenting, long life spans, and high fertility.

Popular science at its most compelling, How Men Age provides new perspectives on the aging process in men and how we became human, and also explores future challenges for human evolution—and the important role older men might play in them.

Richard G. Bribiescas is professor of anthropology and ecology and evolutionary biology at Yale University, where he also serves as deputy provost for faculty development and diversity.

"Bribiescas makes a wonderful case for considering evolutionary ideas in human health, and provides a great introduction for anyone wishing to join the conversation."—Emily Gregg, Lateral magazine

"Charming. . . . [A]n enjoyable and humane look at what could have been a bleak subject, spiced with just the right amounts of humour, anecdote and quirky personal perspective."—David Bainbridge, Literary Review

"[T]he lens through which Bribiescas views [male aging], evolutionary biology, offers a nuanced explanation of why, during almost every phase of human life, men die at a higher rate than women."—Brian Bethune, Maclean's

"[Richard Bribiescas] applies anthropological and evolutionary biological lenses to a sweeping, succinct review of the phenomenon [of how men age], and does so with good humor."—Harvard Magazine

"Richard Bribiescas covers some interesting uncharted territory. This is not a mere description of ageing. Instead, by considering male ageing in the light of natural selection, it aims to answer big questions. . . . Testosterone peaks in early adulthood, so that men are past their physical prime by the age of 30. It's tempting to see it as all downhill from there. But with wit and insight, Bribiescas shows convincingly that's not the case."—Kate Douglas, New Scientist

"This gracefully written, authoritative book is worth ten stay-young-forever self-help fairy tales. If you want to grasp the biological and psychological realities of male aging, this is the book for you. It will help you age better, stronger, healthier, and smarter, without losing your sense of humor."—Melvin Konner, author of Women after All: Sex, Evolution, and the End of Male Supremacy

"How Men Age is a wise, thoughtful, and provocative book that everyone should read—women and men alike. Bribiescas eloquently explains how and why men mature and die, drawing on evolutionary theory, endocrinology, anthropology, genetics, and more. His insights will change how you think about human life—including your own."—Daniel E. Lieberman, author of The Story of the Human Body: Evolution, Health, and Disease

"Bribiescas takes a potentially complicated topic—male aging—and makes reading about it enjoyable. His writing style is warm and inviting, and he uses interesting anecdotes and lighthearted analogies to great effect. The book also has lots of muscle, little fat, and overall, lots of substance."—Peter B. Gray, coauthor of Fatherhood: Evolution and Human Paternal Behavior

"A major contribution to our understanding of gender and life span. Bribiescas's narrative is fun reading, and his arguments are supported by salient examples."—Caleb E. Finch, author of The Biology of Human Longevity

"Do not buy or borrow some book on aging written by a web site, a fake MD, or some other charlatan. Read a book on aging (in men) that first appeared many times in the peer reviewed literature, written by Harvard Trained Yale Expert Richard Bribiescas. . . . You will enjoy this book, especially if you are a man of a certain age."—Greg Laden