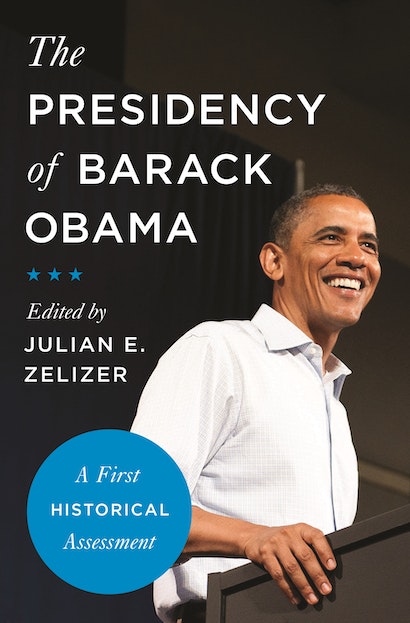 Barack Obama’s election as the first African American president seemed to usher in a new era, and he took office in 2009 with great expectations. But by his second term, Republicans controlled Congress, and, after the 2016 presidential election, Obama’s legacy and the health of the Democratic Party itself appeared in doubt. In The Presidency of Barack Obama, Julian Zelizer gathers leading American historians to put President Obama and his administration into political and historical context.

These writers offer strikingly original assessments of the big issues that shaped the Obama years, including the conservative backlash, race, the financial crisis, health care, crime, drugs, counterterrorism, Iraq and Afghanistan, the environment, immigration, education, gay rights, and urban policy. Together, these essays suggest that Obama’s central paradox is that, despite effective policymaking, he failed to receive credit for his many achievements and wasn’t a party builder. Provocatively, they ask why Obama didn’t unite Democrats and progressive activists to fight the conservative counter-tide as it grew stronger.

Engaging and deeply informed, The Presidency of Barack Obama is a must-read for anyone who wants to better understand Obama and the uncertain aftermath of his presidency.

Julian E. Zelizer is the Malcolm Stevenson Forbes, Class of 1941 Professor of History and Public Affairs at Princeton University and a CNN Political Analyst. He is the author and editor of eighteen books on American political history, has written hundreds of op-eds, and appears regularly on television as a news commentator.

"Filled with insight and analytical wisdom, the book’s appraisals sharpen understanding of current conundrums while revealing the power of well-crafted contemporary history. Readers will gain fresh perspectives about the structural conditions, political experiences, and ideological challenges that shaped the Obama presidency’s policy achievements and disappointments."—Ira Katznelson, author of Fear Itself: The New Deal and the Origins of Our Time

"A brilliant and timely examination of one of the most important presidencies in American history. Avoiding narrow-minded critique and uncritical celebration, this book masterfully analyzes the unheralded victories and unexamined contradictions of the Obama presidency."—Marc Lamont Hill, author of Nobody: Casualties of America’s War on the Vulnerable, from Ferguson to Flint and Beyond

"As the Obama presidency becomes history, historians have a unique ability to put its successes and failures in perspective. This is a rich and stimulating volume from a distinguished group of scholars."—Anne-Marie Slaughter, President & CEO, New America

"This book captures the paradox of Barack Obama’s presidency better than any so far: Conventional wisdom aside, Obama was a better policymaker than a politician. His accomplishments are more impressive and numerous than even many supporters perceived, yet he never fully understood the ferocity of the opposition he engendered and didn’t do enough to fight the forces of reaction that led to Trump’s unlikely victory. The Presidency of Barack Obama will help readers understand what Obama, sadly, did not—until it was too late."—Joan Walsh, author of What’s the Matter with White People?: Finding Our Way in the Next America

"Early versions of history can be tricky, but Julian Zelizer and his colleagues have provided a firm foundation for the many books analyzing the presidency of Barack Obama that will follow."—Norman Ornstein, The American Enterprise Institute

"The essays in this volume are among the most nuanced, thorough, and incisive perspectives we’ve yet seen regarding the complex, contradictory, and besieged tenure of the first black president. Amid the veil of partisan rancor, conspiracy theory, and recrimination that has defined its aftermath, this kind of lucid analysis is even more impressive. We will be assessing the implications of the Obama presidency for many years to come—and this book will remain a crucial part of that dialogue."—Jelani Cobb, staff writer for The New Yorker

"Julian Zelizer has assembled a superb collection of essays by the nation's finest historians of U.S. politics and policymaking. This excellent book immediately takes its place as the indispensable one-volume guide to what Barack Obama accomplished—and failed to accomplish—over the course of eight years."—Eric Patashnik, author of Reforms at Risk: What Happens after Major Policy Changes Are Enacted

"This is a smart, timely collection of essays that will serve as an important first assessment of the Obama administration. It will be useful to scholars of modern American politics, but also to journalists and policy makers, as well as many politically minded general readers."—Joseph Crespino, author of Strom Thurmond's America