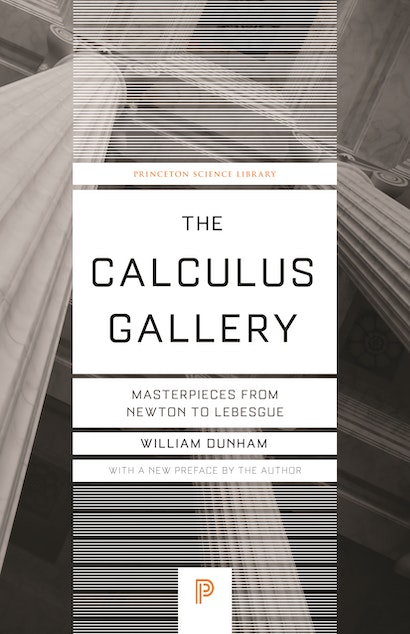 Buy This
More than three centuries after its creation, calculus remains a dazzling intellectual achievement and the gateway to higher mathematics. This book charts its growth and development by sampling from the work of some of its foremost practitioners, beginning with Isaac Newton and Gottfried Wilhelm Leibniz in the late seventeenth century and continuing to Henri Lebesgue at the dawn of the twentieth. Now with a new preface by the author, this book documents the evolution of calculus from a powerful but logically chaotic subject into one whose foundations are thorough, rigorous, and unflinching—a story of genius triumphing over some of the toughest, subtlest problems imaginable. In touring The Calculus Gallery, we can see how it all came to be.
William Dunham is a Research Associate in Mathematics at Bryn Mawr College. He is the author of Journey Through Genius: The Great Theorems of Mathematics, The Mathematical Universe, and Euler: The Master of Us All, and is a co-editor (along with Jerry Alexanderson and Don Albers) of The G.H. Hardy Reader. He received the Mathematical Association of America's George Polya, Trevor Evans, and Lester R. Ford awards, as well as its Beckenbach Prize for expository writing.

"This is a book that should be part of the personal library of any mathematician."—Mark Hunacek, Mathematical Gazette

“The Calculus Gallery is a wonderful book. The style is inviting; the explanations are clear and accessible…. Mathematicians, scientists, and historians alike can learn much that is interesting, much that is mathematically significant, and a good deal that is both.”—Judith V. Grabiner, Science

“If a better historical treatment of the development of the calculus is available, this reviewer has yet to see it…. Essential.”—Choice

“[A] brilliant book…. I predict that Dunham’s book will itself come to be considered a masterpiece in its field.”—Victor J. Katz, American Scientist

“A joy to read…. [The Calculus Gallery] is a lovely and engaging gallery of the ‘masters’ that belongs in the library of everyone who seriously teaches or studies the subject.”—Diane M. Spresser, Mathematics Teacher