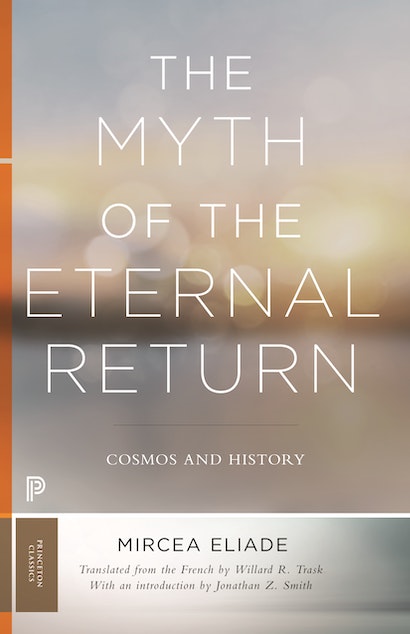 Buy This
First published in English in 1954, this founding work of the history of religions secured the North American reputation of the Romanian émigré-scholar Mircea Eliade. Making reference to an astonishing number of cultures and drawing on scholarship published in no fewer than half a dozen European languages, The Myth of the Eternal Return illuminates the religious beliefs and rituals of a wide variety of archaic religious cultures. While acknowledging that a return to their practices is impossible, Eliade passionately insists on the value of understanding their views to enrich the contemporary imagination of what it is to be human. This book includes an introduction from Jonathan Z. Smith that provides essential context and encourages readers to engage in an informed way with this classic text.
Mircea Eliade (1907–1986) was the Sewell L. Avery Distinguished Service Professor of the History of Religions at the University of Chicago. His many books include Shamanism: Archaic Techniques of Ecstasy, Images and Symbols: Studies in Religious Symbolism, and Yoga: Immortality and Freedom (all Princeton). Jonathan Z. Smith (1938–2017) was the Robert O. Anderson Distinguished Service Professor of the Humanities at the University of Chicago. He was the author of Imagining Religion: From Babylon to Jonestown and Relating Religion: Essays in the Study of Religion.

"Luminous, profound and extremely stimulating. . . . This is an essay which everyone interested in the history of religion and in the mentality of ancient man will have to read. It is difficult to speak too highly of it."—Review of Religion

"Profound and pregnant research in the psychology of time and the intuitive forms of the mind as revealed by the early cultures’ attitude toward history."—The Nation