A comprehensive history of fraud in America, from the early nineteenth century to the subprime mortgage crisis 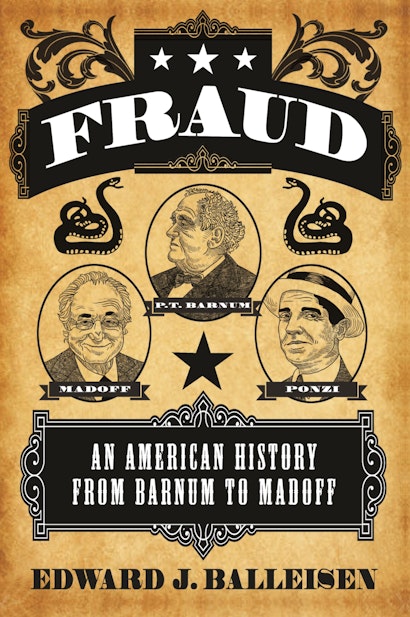 In America, fraud has always been a key feature of business, and the national worship of entrepreneurial freedom complicates the task of distinguishing salesmanship from deceit. In this sweeping narrative, Edward Balleisen traces the history of fraud in America—and the evolving efforts to combat it—from the age of P. T. Barnum through the eras of Charles Ponzi and Bernie Madoff. This unprecedented account describes the slow, piecemeal construction of modern institutions to protect consumers and investors—from the Gilded Age through the New Deal and the Great Society. It concludes with the more recent era of deregulation, which has brought with it a spate of costly frauds, including corporate accounting scandals and the mortgage-marketing debacle. By tracing how Americans have struggled to foster a vibrant economy without encouraging a corrosive level of cheating, Fraud reminds us that American capitalism rests on an uneasy foundation of social trust.

Edward J. Balleisen is professor of history and public policy and vice provost for interdisciplinary studies at Duke University.

“At this political moment, few books could be more timely than Fraud. . . . Balleisen’s book provides a far more sweeping view than its predecessors, offering a much-needed big-picture perspective. . . . [R]ollicking and engaging. . . . Its moral seems to be that Americans are fools, led to economic ruin by their own credulity, again and again and again.”—Brooke Harrington, TheAtlantic.com

“Balleisen argues that fraud has been a central figure of our freewheeling economy from the start, making it hard to tell scams from legitimate businesses and hard to tell aggressive sales tactics from outright deception.”—Carina Chocano, New York Times Magazine

“A fascinating, gripping, two-hundred-year history of fraud . . . the reaction to it and the cost to American livelihoods.”—Ralph Nader