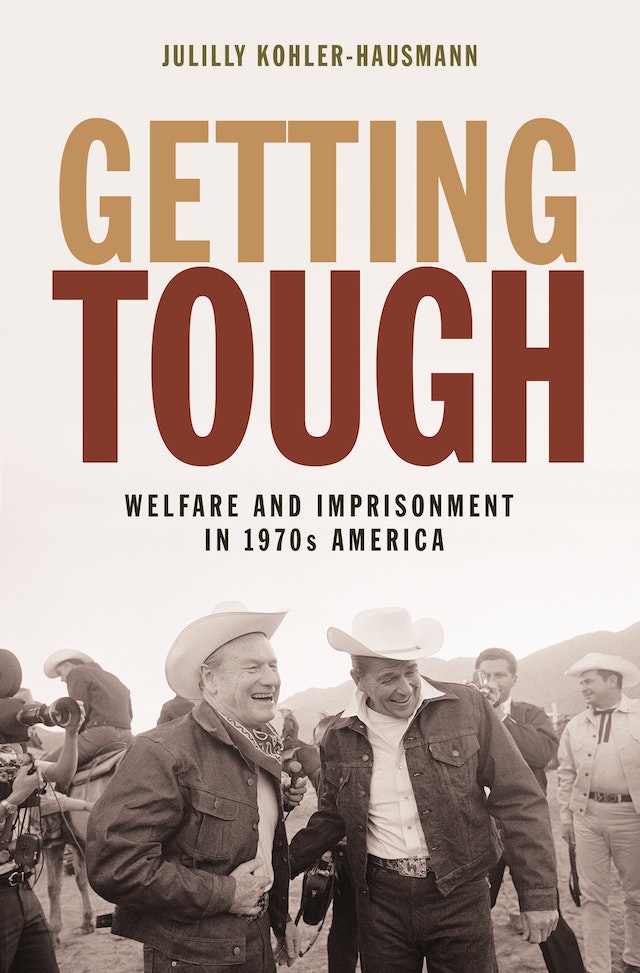 In 1970s America, politicians began “getting tough” on drugs, crime, and welfare. These campaigns helped expand the nation’s penal system, discredit welfare programs, and cast blame for the era’s social upheaval on racialized deviants that the state was not accountable to serve or represent. Getting Tough sheds light on how this unprecedented growth of the penal system and the evisceration of the nation’s welfare programs developed hand in hand. Julilly Kohler-Hausmann shows that these historical events were animated by struggles over how to interpret and respond to the inequality and disorder that crested during this period.

When social movements and the slowing economy destabilized the U.S. welfare state, politicians reacted by repudiating the commitment to individual rehabilitation that had governed penal and social programs for decades. In its place, they championed strategies of punishment, surveillance, and containment. The architects of these tough strategies insisted they were necessary, given the failure of liberal social programs and the supposed pathological culture within poor African American and Latino communities. Kohler-Hausmann rejects this explanation and describes how the spectacle of enacting punitive policies convinced many Americans that social investment was counterproductive and the “underclass” could be managed only through coercion and force.

Getting Tough illuminates this narrative through three legislative cases: New York’s adoption of the 1973 Rockefeller drug laws, Illinois’s and California’s attempts to reform welfare through criminalization and work mandates, and California’s passing of a 1976 sentencing law that abandoned rehabilitation as an aim of incarceration. Spanning diverse institutions and weaving together the perspectives of opponents, supporters, and targets of punitive policies, Getting Tough offers new interpretations of dramatic transformations in the modern American state.

Julilly Kohler-Hausmann is associate professor of history at Cornell University.

"A vital reminder that reactionary ideas gestate at the local level before they get nationalized. And, with enough organizing, so too might emancipatory ones."—Dan Berger, Truthout

"This extraordinary book analyzes changing state-level policies toward drugs, welfare, and incarceration in the 1970s in the US, revealing connections between welfare and imprisonment as institutions of social regulation. . . . Drawing on statements and letters from officials, activists, prisoners, welfare recipients, and concerned citizens, Kohler-Hausmann illuminates the often contradictory and always contingent dialogues through which 'tough' policies were legitimized and enacted. . . . The inclusion of so many voices leads to a lively and engaging read."—Choice

"In her groundbreaking book, Kohler-Hausmann draws important new connections between penal and social welfare policy and debunks common assumptions about poverty, crime, and drug use in the process. Getting Tough transforms the way we view the late twentieth-century United States and speaks to the problems at the center of American democracy today."—Elizabeth Hinton, author of From the War on Poverty to the War on Crime: The Making of Mass Incarceration in America

"Getting Tough is an extraordinary gift to all of us who have long tried to make sense of how the United States came to build one of the world's most punitive carceral states, so closely on the heels of having constructed a redistributive welfare state. Examining the complex histories and sensibilities of political elites, grassroots activists, and voters, while illuminating the lived experiences of drug sellers, welfare recipients, and prisoners, Kohler-Hausmann profoundly upends how we understand the political, cultural, and social transformations of the late twentieth and early twenty-first centuries. This book is nothing short of pathbreaking."—Heather Ann Thompson, author of Blood in the Water: The Attica Prison Uprising of 1971 and Its Legacy

"Compelling and deeply illuminating, Getting Tough chronicles the contingent historical processes that gave rise to mass incarceration and welfare-state retrenchment. Kohler-Hausmann deftly juxtaposes the political battles over welfare, drug, and sentencing policies that played out across American states during the 1970s, revealing how and why state policymakers advanced increasingly punitive and coercive approaches to managing marginalized populations. Skillfully integrating top-down and bottom-up perspectives, Kohler-Hausmann reveals that get-tough policies were not simply a response to a conservative shift in public opinion, they also helped produce it. This excellent book is a must-read."—Cybelle Fox, author of Three Worlds of Relief: Race, Immigration, and the American Welfare State from the Progressive Era to the New Deal

"This is an original, sweeping look at the political history of policies within the criminal justice and welfare domain, and the political choices that transformed the nation's approach to the poor. Most books either deal with the history of public assistance or the history of penal and sentencing reforms. Getting Tough goes further than any other book to document the interplay of dominant state approaches in both arenas."—Vesla M. Weaver, Yale University

"Getting Tough makes important, creative interventions in major debates regarding political history, social policy formation, the origins of mass incarceration, and the links between the carceral and welfare states. The insights of the book's three case studies are powerful and sophisticated and provide the foundation for a pioneering reassessment of the prevailing narratives regarding law-and-order politics and criminalization during the 1960s and 70s."—Matthew Lassiter, University of Michigan

"U.S. history is experiencing a wave of new work on the political and social history of incarceration. The right book at the right time, Getting Tough stands out among its peers for its examination of drug policy and sentencing alongside the transformation of the welfare state. In addition to being a critical history of mass incarceration, this book offers a significant reinterpretation of the 1970s, the decade when the wars on drugs and welfare overlapped in a larger war on the poor."—Robert O. Self, author of All in the Family: The Realignment of American Democracy Since the 1960s