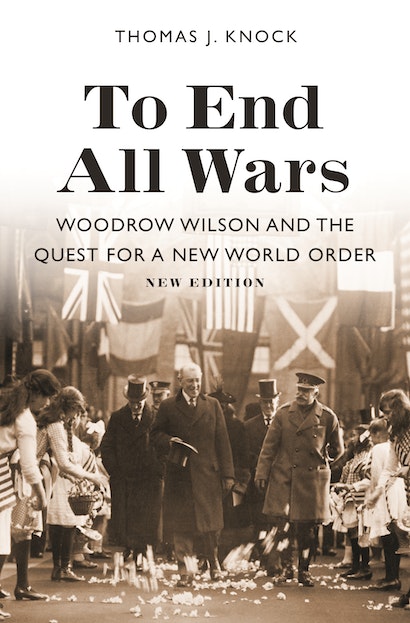 In the widely acclaimed To End All Wars, Thomas Knock provides an intriguing, often provocative narrative of Woodrow Wilson’s epic quest for a new world order. This book follows Wilson’s thought and diplomacy from his policy toward revolutionary Mexico, through his dramatic call for “Peace without Victory” in World War I, to the Senate’s rejection of the League of Nations. Throughout, Knock reinterprets the origins of internationalism in American politics, sweeping away the view that isolationism was the cause of Wilson’s failure and revealing the role of competing visions of internationalism—conservative and progressive.

Thomas J. Knock is Altshuler Distinguished Teaching Professor at Southern Methodist University. He is the author of The Rise of a Prairie Statesman and coauthor of The Crisis of American Foreign Policy (both Princeton).

"Indeed, embers of interest in Wilson and his relevance have been glowing since the Cold War’s end, and none more brightly than Thomas J. Knock’s To End All Wars: Woodrow Wilson and the Quest for a New World Order, recently reissued with a new author’s preface by Princeton University Press. . . . Thirty-odd years after its original conception and writing, To End All Wars has reemerged in historiographical and political landscapes that remain, in significant and disappointing ways, largely unchanged since the early 1990s."—Trygve Throntveit, H-Diplo

"Thomas Knock brings Woodrow Wilson, America's most misunderstood president, into the light and shows why he remains one of our greatest. Wilson was the first president to foresee a path to peace and no leader after him has yet found a better way."—Elizabeth Cobbs, author of American Umpire

"A landmark when it was first published, To End All Wars remains one of the most important books in the field. There is no better time to reissue this classic than during the age of Trump, when the Wilsonian vision of progressive internationalism faces its most dire threat."—Andrew Preston, author of Sword of the Spirit, Shield of Faith: Religion in American War and Diplomacy

"An enlightening and valuable introduction to the birth of [a] noble vision."—Arthur Schlesinger Jr., Times Literary Supplement

"To End All Wars is the wisest and most provocative study of Woodrow Wilson to be published in the hellish century its subject was trying to save. This book's reissue in our own volatile century is not just welcome, but imperative."—Trygve Throntveit, author of Power without Victory: Woodrow Wilson and the American Internationalist Experiment

"Fresh analysis of Wilson, his times, and the evolution of his international position. . . . Sharp, succinct, and expert."—Kirkus Reviews