The close links between forgery and criticism throughout history 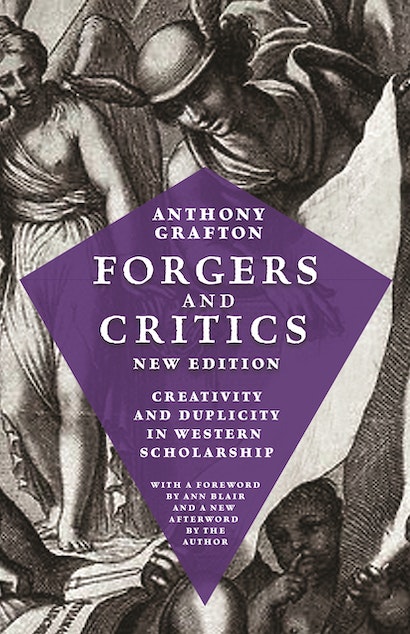 In Forgers and Critics, Anthony Grafton provides a wide-ranging exploration of the links between forgery and scholarship. Labeling forgery the “criminal sibling” of criticism, Grafton describes a panorama of remarkable individuals—forgers from classical Greece through the recent past—who produced a variety of splendid triumphs of learning and style, as well as the scholarly detectives who honed the tools of scholarship in attempts to unmask these skillful fakers. In the process, Grafton discloses the extent, the coherence, and the historical interest of two significant and tightly intertwined strands in the Western intellectual tradition.

Anthony Grafton is the Henry Putnam University Professor of History at Princeton University. His many books include What was History? and Bring Out Your Dead.

“Grafton makes clear that the master forger must also be . . . a scholar . . . as knowledgeable as those whom he is trying to fool. . . . This elegant monograph ranges from Porphyry through Isaac Casaubon . . . on to Scaliger, Chatterton and others, though its focus remains the transmission of classical texts. Or, rather, pseudo-classical texts.”—Washington Post

“Forgery is the pornography of erudition; and—combining scandal, deception, and betrayal with tales of virtuoso detective work—it has long exercised romantic attraction for historians, providing illicit pleasures (when it has not provoked scholarly outrage). To this fascinating and controversial aspect of the history of scholarship Grafton’s book is a learned, insightful, and most entertaining introduction.”—Donald R. Kelley, Renaissance Quarterly

“A good read. . . . Grafton’s principal theme is the symbiotic relationship between forgers and critics, and the spur provided by the efforts of each to the development of new skills and techniques by the other. . . . Grafton’s notes, as always, are superb . . . providing lesser mortals with plenty of new and essential material for study.”—Julia Haig Gaisser, Bryn Mawr Classical Review