A wide-ranging reevaluation of utopian literature and philosophy, from Plato to Chang-Rae Lee 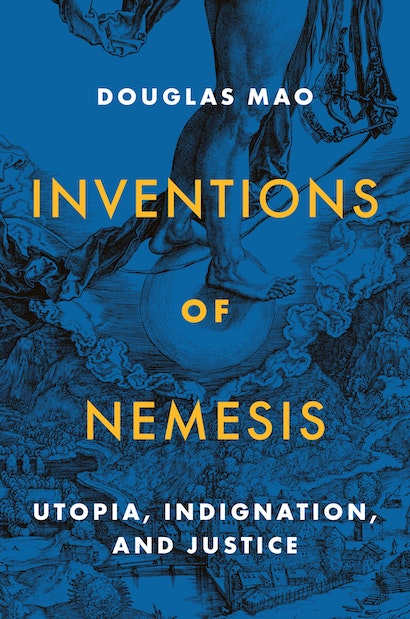 Examining literary and philosophical writing about ideal societies from Greek antiquity to the present, Inventions of Nemesis offers a striking new take on utopia’s fundamental project.

Noting that utopian imagining has often been propelled by an angry conviction that society is badly arranged, Douglas Mao argues that utopia’s essential aim has not been to secure happiness, order, or material goods, but rather to establish a condition of justice in which all have what they ought to have. He also makes the case that hostility to utopias has frequently been associated with a fear that they will transform humanity beyond recognition, doing away with the very subjects who should receive justice in a transformed world. Further, he shows how utopian writing speaks to contemporary debates about immigration, labor, and other global justice issues. Along the way, Inventions of Nemesis connects utopia to the Greek concept of nemesis, or indignation at a wrong ordering of things, and advances fresh readings of dozens of writers and thinkers—from Plato, Thomas More, Nathaniel Hawthorne, Edward Bellamy, Charlotte Perkins Gilman, and H. G. Wells to John Rawls, Robert Nozick, Fredric Jameson, Ursula Le Guin, Octavia Butler, and Chang-Rae Lee.

Ambitious and timely, Inventions of Nemesis offers a vital reconsideration of what it really means to imagine an ideal society.

Douglas Mao is Russ Family Professor in the Humanities at Johns Hopkins University. He is the author of Fateful Beauty: Aesthetic Environments, Juvenile Development, and Literature, 1860–1960 and Solid Objects: Modernism and the Test of Production (both Princeton).

"Inventions of Nemesis is undoubtedly an extremely interesting book."—Seamus Flaherty, Marx and Philosophy Review of Books

"Readers of all stripes will appreciate Mao's consistent attention to context and to the parallels among old favorites and more recent works. This is a valuable addition to the conversation on Utopias."—Choice Reviews

"A brilliant, erudite, and transformative interpretation of utopia as an exercise in justice. . . . Its arguments will influence scholars working in utopian studies, early modern and modern literatures, global justice theories, and migration studies."—Greg Forter, Modernism/modernity

"Douglas Mao’s erudite, keen-eyed, and deeply rewarding volume mounts a subtle polemic against how the discipline understands itself, and it does so by adding to its options for understanding what ethics is."—Bruce Robbins, Novel

“In these timely ruminations, Douglas Mao reminds us of something crucially important: utopia is born from a profound dissatisfaction with the state of the world—and necessary for imagining true social change. This is an important book for us today.”—Martin Puchner, Harvard University

"Ambitious and far-reaching, Inventions of Nemesis offers a considerable reorientation of utopian studies. This compelling reinterpretation of utopia as being primarily motivated by the search for justice rather than happiness deserves to be widely debated."—Patrick Parrinder, author of Utopian Literature and Science

“Inventions of Nemesis is a hugely important book. It will be required reading for literary and philosophical scholars and is destined to become an essential point of reference in utopian studies.”—Nathan Waddell, author of Modernist Nowheres