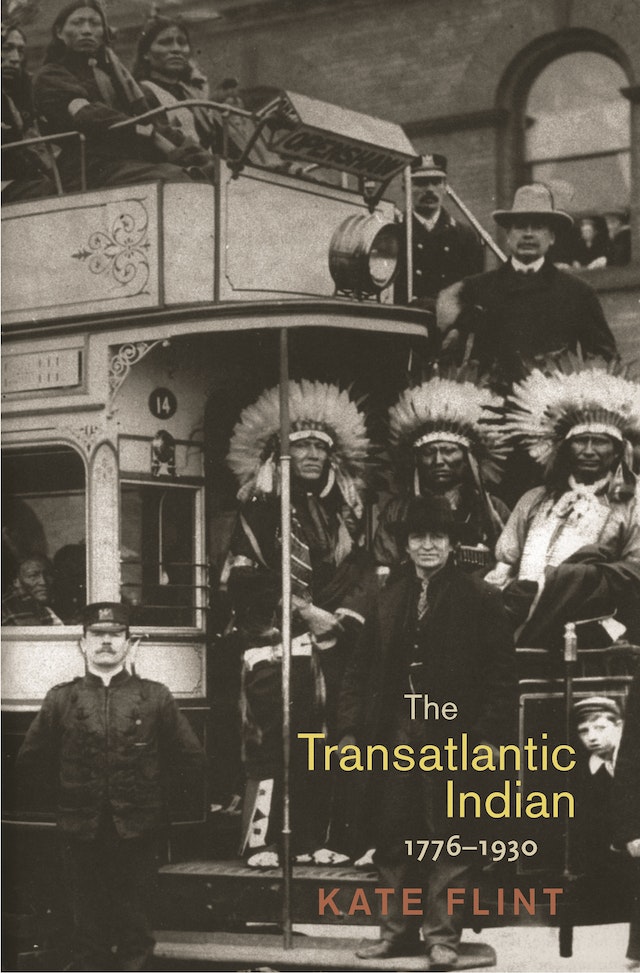 This book takes a fascinating look at the iconic figure of the Native American in the British cultural imagination from the Revolutionary War to the early twentieth century, and examining how Native Americans regarded the British, as well as how they challenged their own cultural image in Britain during this period. Kate Flint shows how the image of the Indian was used in English literature and culture for a host of ideological purposes, and she reveals its crucial role as symbol, cultural myth, and stereotype that helped to define British identity and its attitude toward the colonial world.

Through close readings of writers such as Charles Dickens, Elizabeth Gaskell, and D. H. Lawrence, Flint traces how the figure of the Indian was received, represented, and transformed in British fiction and poetry, travelogues, sketches, and journalism, as well as theater, paintings, and cinema. She describes the experiences of the Ojibwa and Ioway who toured Britain with George Catlin in the 1840s; the testimonies of the Indians in Buffalo Bill’s Wild West Show; and the performances and polemics of the Iroquois poet Pauline Johnson in London. Flint explores transatlantic conceptions of race, the role of gender in writings by and about Indians, and the complex political and economic relationships between Britain and America.

The Transatlantic Indian, 1776-1930 argues that native perspectives are essential to our understanding of transatlantic relations in this period and the development of transnational modernity.

Kate Flint is professor of English at Rutgers University. She is the author of The Victorians and the Visual Imagination and The Woman Reader, 1837-1914.

"It is in any case no surprise to report that Flint's readings of her sources are always searching and nuanced. The book is also very light on jargon; it is too intellectually confident for that. This will be a major text in the burgeoning field of transantlantic studies. It offers a distinctive portrait of Victorian culture that we have not seen before."—Rohan McWilliam, 19: Interdisciplinary Studies in the Long Nineteenth Century

"Kate Flint's scholarly work is a fascinating and ground-breaking study of the Indian as both imagined in literature and visible in transatlantic encounters and exchanges. . . . Her extensive knowledge of both Victorian society and culture and tribal histories and cultures is evident throughout the work. . . . Flint's work establishes fruitful links with recent scholarship and debates which have successfully placed the Indian in a transatlantic perspective."—Mandy Cooper, Journal of Transatlantic Studies

"The Transatlantic Indian succeeds admirably in surveying the transatlantic exchanges between Native Americans and British readers and writers during the long nineteenth century."—Siohban Carroll, English Literature in Transition

"This beautifully researched project contributes a sweeping synthesis, but its virtues go much farther. . . . Flint pulls off the tricky combination of a tight argument with an exploratory format. Delicate readings of slippery texts will impress literary scholars, while historians will appreciate the book's temporal and cultural scope and its broad range of prosaic and canonical sources. . . . [T]his is a book to relish, ruminate over, and revisit."—Rebecca R. Noel, Literature and History

"The claims of The Transatlantic Indian are superbly documented by extensive notes and bibliographical data; it is nicely illustrated by materials Flint actually analyses; and the book, as an artifact, is presented with the high production values characteristic of Princeton University Press."—Mick Gidley, Review of English Studies

"[I]ts pages, sentences, and images demands fullest attention, appealing at once to our senses, emotions and minds."—Cyana Leahy-Dios, European Legacy

"The historical scholarship on white attitudes toward Native Americans is prolific, but with The Transatlantic Indian, Kate Flint refreshes this familiar genre with a transnational approach to Anglo-Indian relations."—David A. Gerber, Journal of American Ethnic History

"This is a very informed volume that uses an impressive range of literary texts in order to chart a history of representation and interaction. The crucial intervention of Flint's project is in how it implicates Britain in narratives and discourses regarding Native Americans, in a move that demonstrates the long and intimate links that become forged between an empire and its colony."—Hum, Ethnicity and Race in a Changing World

"[A]s is characteristic of the best scholarly surveys, Flint's book marks out the territory that future scholars will need to subject to ever finer scrutiny."—Joshua David Bellin, Modern Philology

"This is an important work of scholarship. By examining British responses to the presence of Indians in the Americas, and especially in North America, Flint offers a genuinely original perspective on both the history of representation of the figure of the Indian and the history of Indian-white relations. Her readings are smart and always judicious."—Lucy Maddox, Georgetown University

"Truly brilliant. Flint does what very few writers have done before, which is to acknowledge the role Native Americans—and the often contradictory representations of them—played in the British imagination. She brings her keen literary sensibility and her wonderful ability to read the visual culture of the Victorian era to this book in ways that do considerable justice to the complexity and importance of this topic."—Joseph W. Childers, University of California, Riverside

"An impressively comprehensive, ambitious, and informed book. Flint analyzes the cultural myths, stereotypes, and ideological constructions that shaped the understanding of Native Americans in a variety of British contexts and media, and also turns her lens upon Native American understandings of British culture. This is a very important book."—Amanda Anderson, Johns Hopkins University