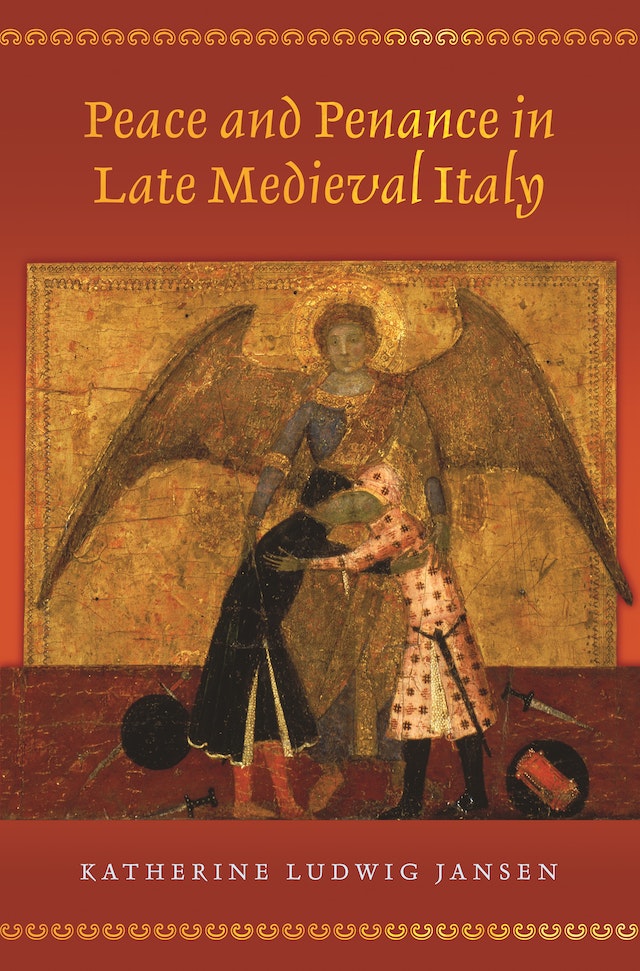 Medieval Italian communes are known for their violence, feuds, and vendettas, yet beneath this tumult was a society preoccupied with peace. Peace and Penance in Late Medieval Italy is the first book to examine how civic peacemaking in the age of Dante was forged in the crucible of penitential religious practice.

Focusing on Florence in the thirteenth and fourteenth centuries, an era known for violence and civil discord, Katherine Ludwig Jansen brilliantly illuminates how religious and political leaders used peace agreements for everything from bringing an end to neighborhood quarrels to restoring full citizenship to judicial exiles. She brings to light a treasure trove of unpublished evidence from notarial archives and supports it with sermons, hagiography, political treatises, and chronicle accounts. She paints a vivid picture of life in an Italian commune, a socially and politically unstable world that strove to achieve peace. Jansen also assembles a wealth of visual material from the period, illustrating for the first time how the kiss of peace—a ritual gesture borrowed from the Catholic Mass—was incorporated into the settlement of secular disputes.

Breaking new ground in the study of peacemaking in the Middle Ages, Peace and Penance in Late Medieval Italy adds an entirely new dimension to our understanding of Italian culture in this turbulent age by showing how peace was conceived, memorialized, and occasionally achieved.

Katherine Ludwig Jansen is professor of history at the Catholic University of America. Her books include the award-winning The Making of the Magdalen: Preaching and Popular Devotion in the Later Middle Ages (Princeton).

"This volume illustrates the simultaneous, vigorous, engaging peacemaking activity that provided an antidote to war. The well-chosen illustrations integrate the plastic arts into this textual study."—D.A. Brown, Choice

"In this eloquently written book, Katherine Ludwig Jansen explores sermons, treatises, notarial records, and wall paintings to demonstrate the centrality of penitence in the quest for peace in the fractious society of thirteenth- and fourteenth-century Florence. She shows how true peace—that is, the proper ordering of society—was widely understood to arise only when individual compunction led to mutual consent to transform individuals and their relationships. This book will be read with interest not only by historians of medieval Italy but by anyone who needs to understand the interpenetration of religious norms, physical rituals, and legal systems in human society."—Patrick J. Geary, author of The Myth of Nations: The Medieval Origins of Europe

Too often, we associate medieval Europe with interpersonal violence. This important book reminds us that medieval conflict was balanced by beliefs and customs that induced former enemies to make peace. "Exploring the late medieval theology of peace through religious, penitential, and artistic sources, Jansen deftly brings religious perspectives to bear on the period’s abundant legal and administrative documentation. Peace and Penance in Late Medieval Italy convincingly demonstrates Christianity’s powerful contribution to the late medieval culture of peacemaking."—Daniel Lord Smail, author of The Consumption of Justice: Emotions, Publicity, and Legal Culture in Marseille, 1264-1423

"Redressing the imbalance in the history of Italy’s communal era that favors civil strife over peace, Katherine Ludwig Jansen weaves theology, liturgy, jurisprudence, and iconography into an erudite and elegant account of the entwined roles of peace and penance in those lively cities."—Lester K. Little, Smith College

"Beautifully written, and carefully considered, Peace and Penance in Late Medieval Italy is a landmark in our understanding of how religion informed civic life in the Middle Ages. With scholarly aplomb, Katherine Ludwig Jansen shows how Florentines—men and women, families and factions—repeatedly attempted to make peace out of violence, competition, and feud. Prompted to make penance by the preaching of friars in churches and piazzas, and assisted by notaries, they signed peace documents, and sealed them with a kiss. A magisterial and salutary lesson about the possibilities of healing after strife."—Miri Rubin, Queen Mary University of London

"Ambitious, interdisciplinary, and beautifully researched. Jansen makes a compelling case for the centrality of penance and peace in late medieval Italian culture."—Carol Lansing, author of Passion and Order: Restraint of Grief in the Medieval Italian Communes