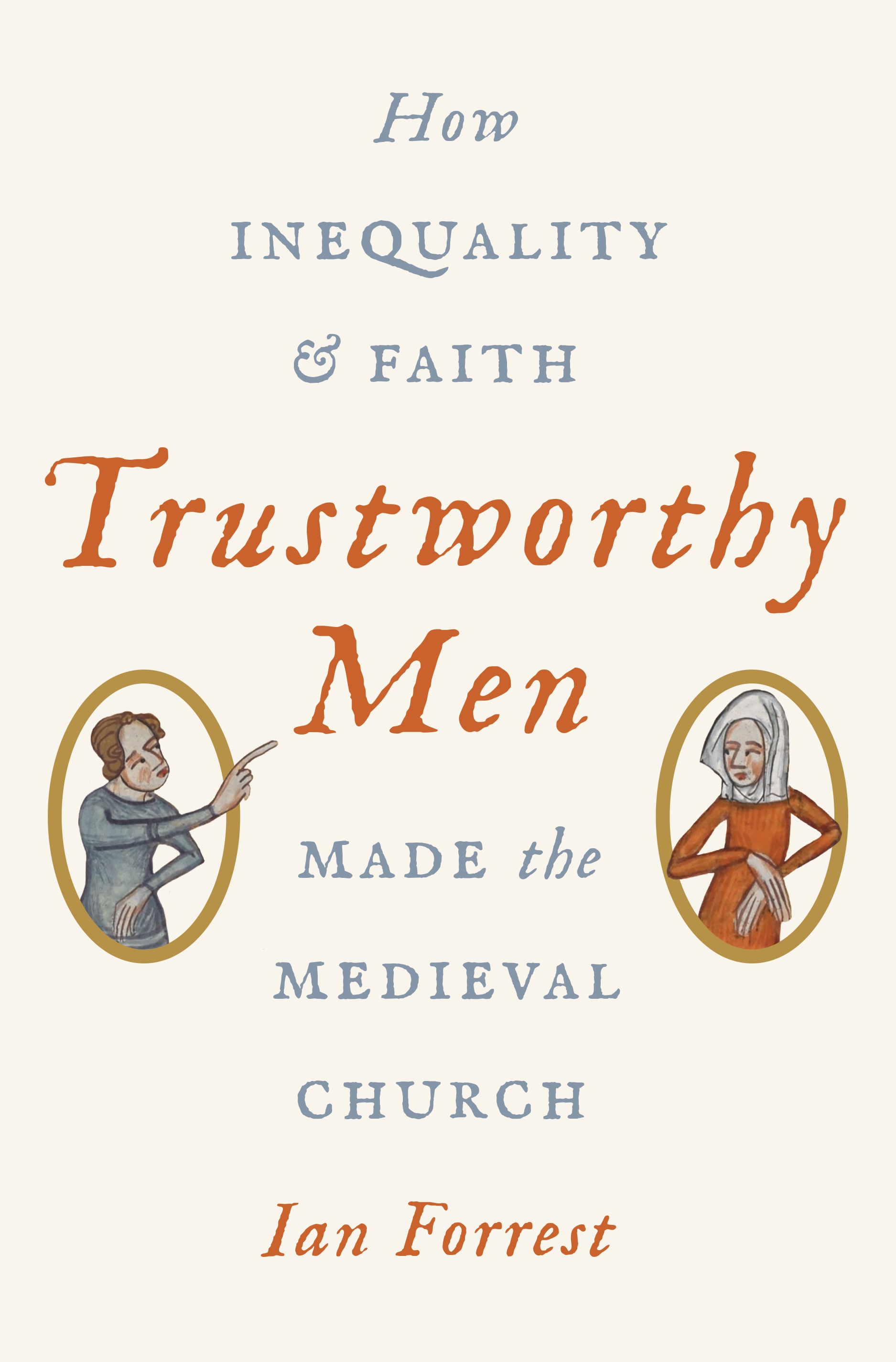 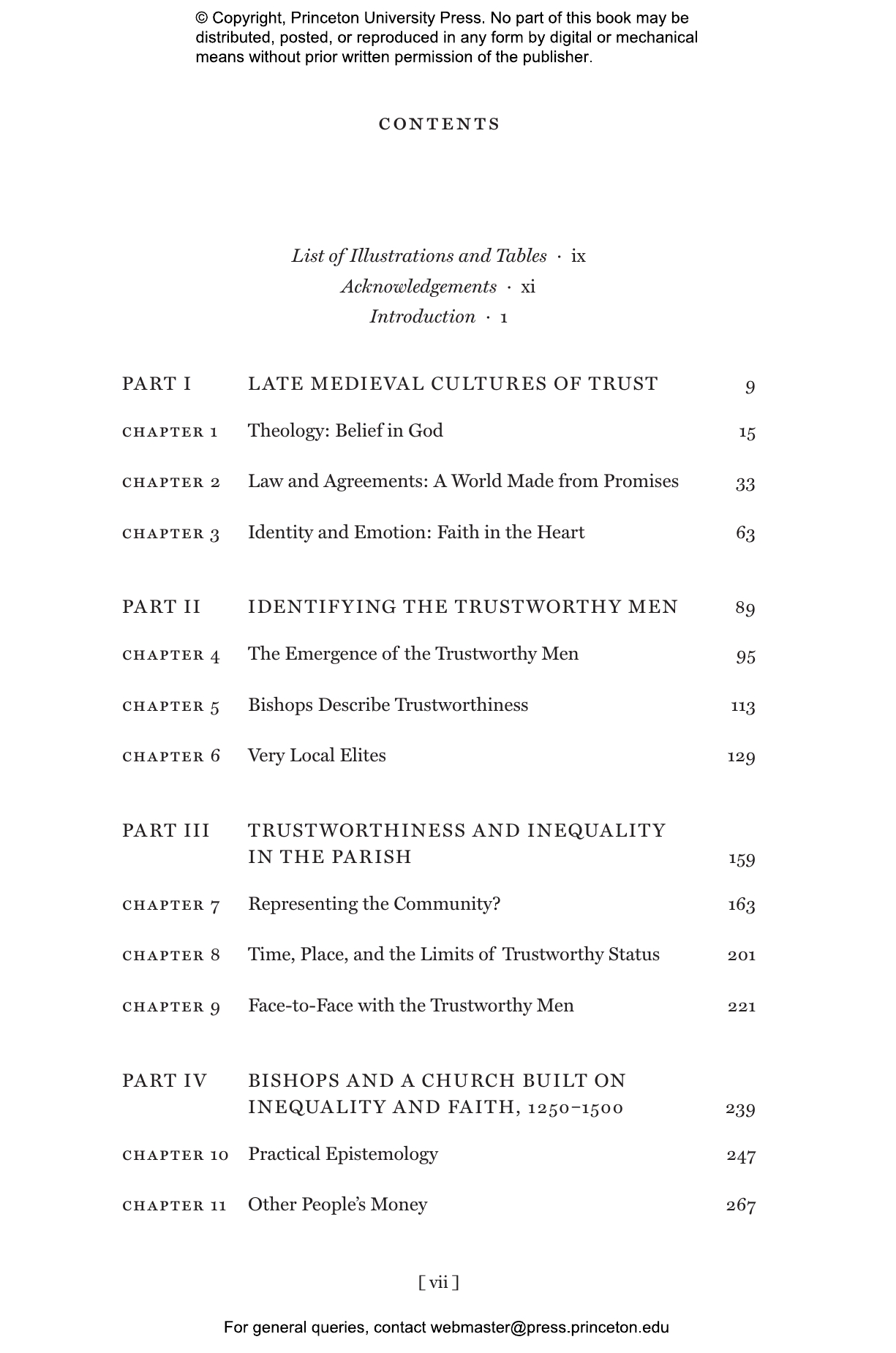 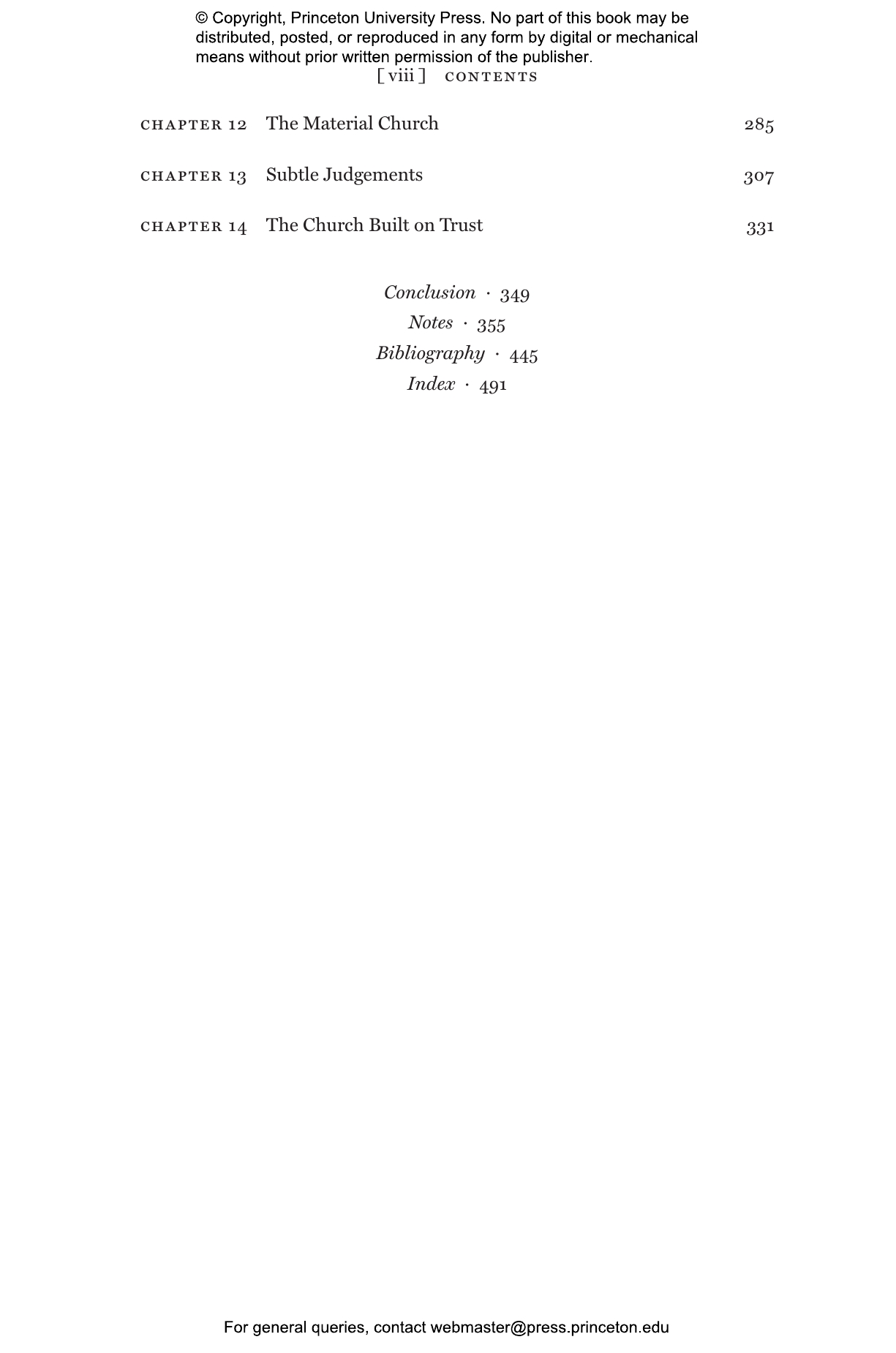 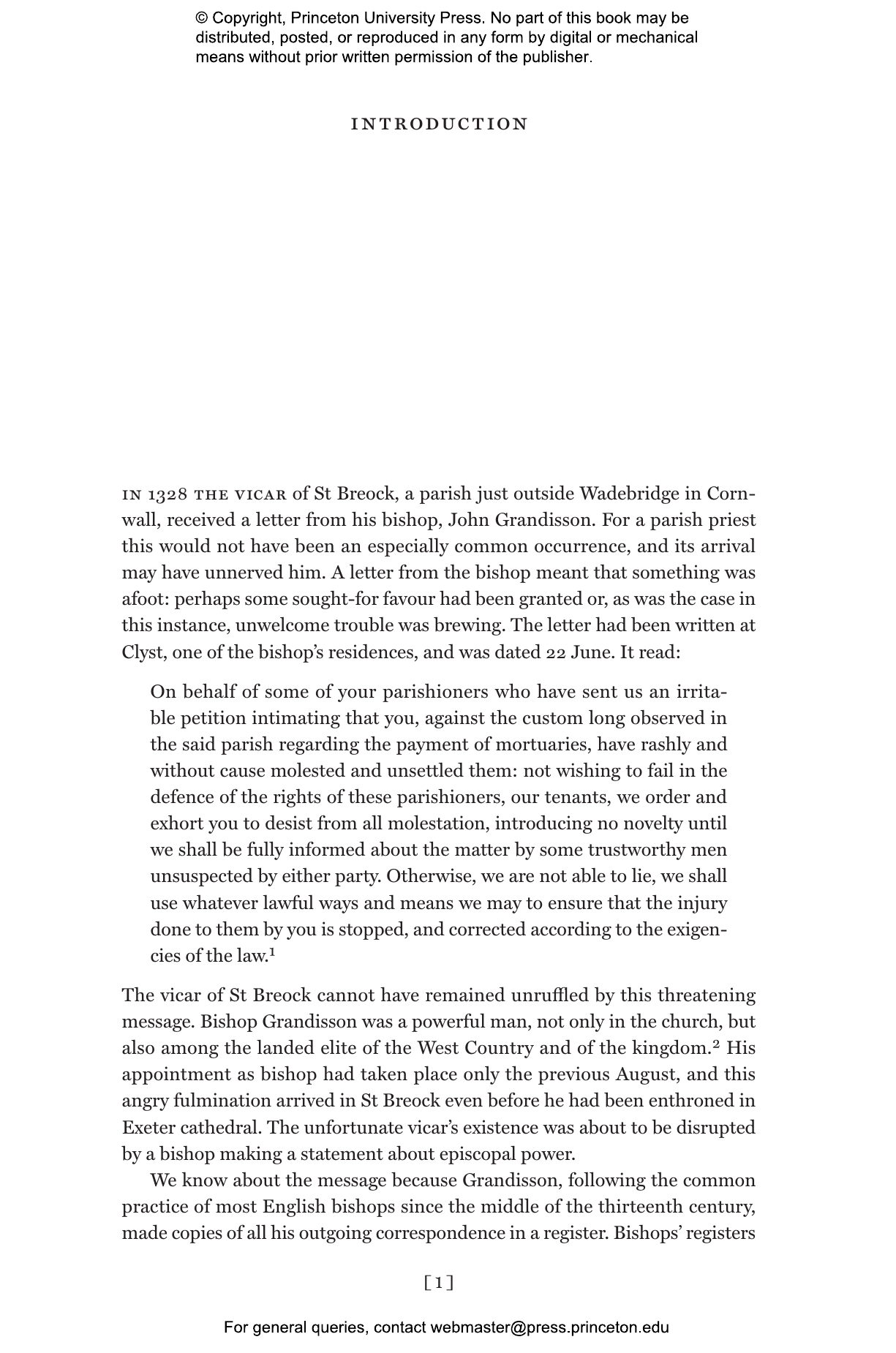 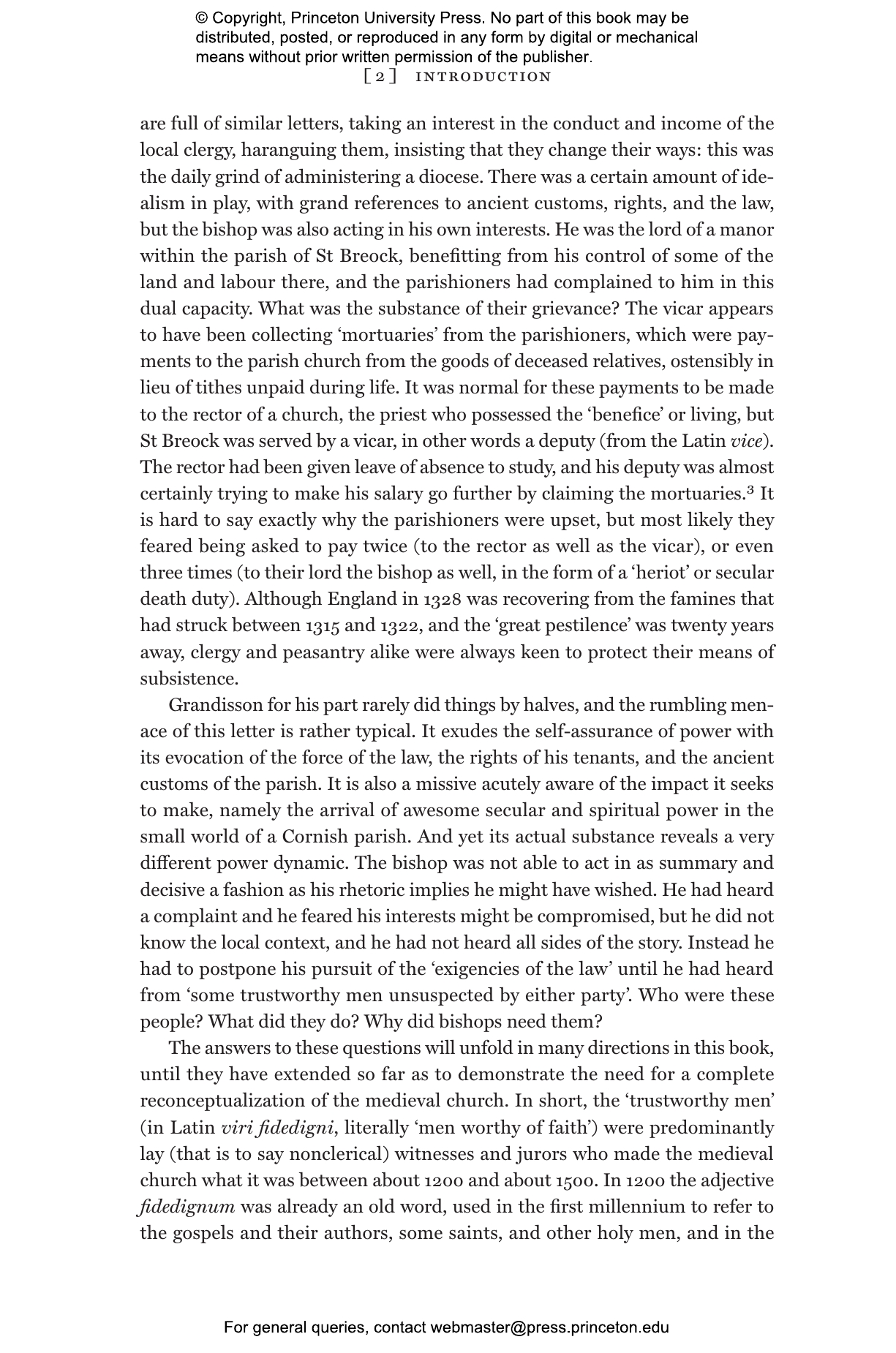 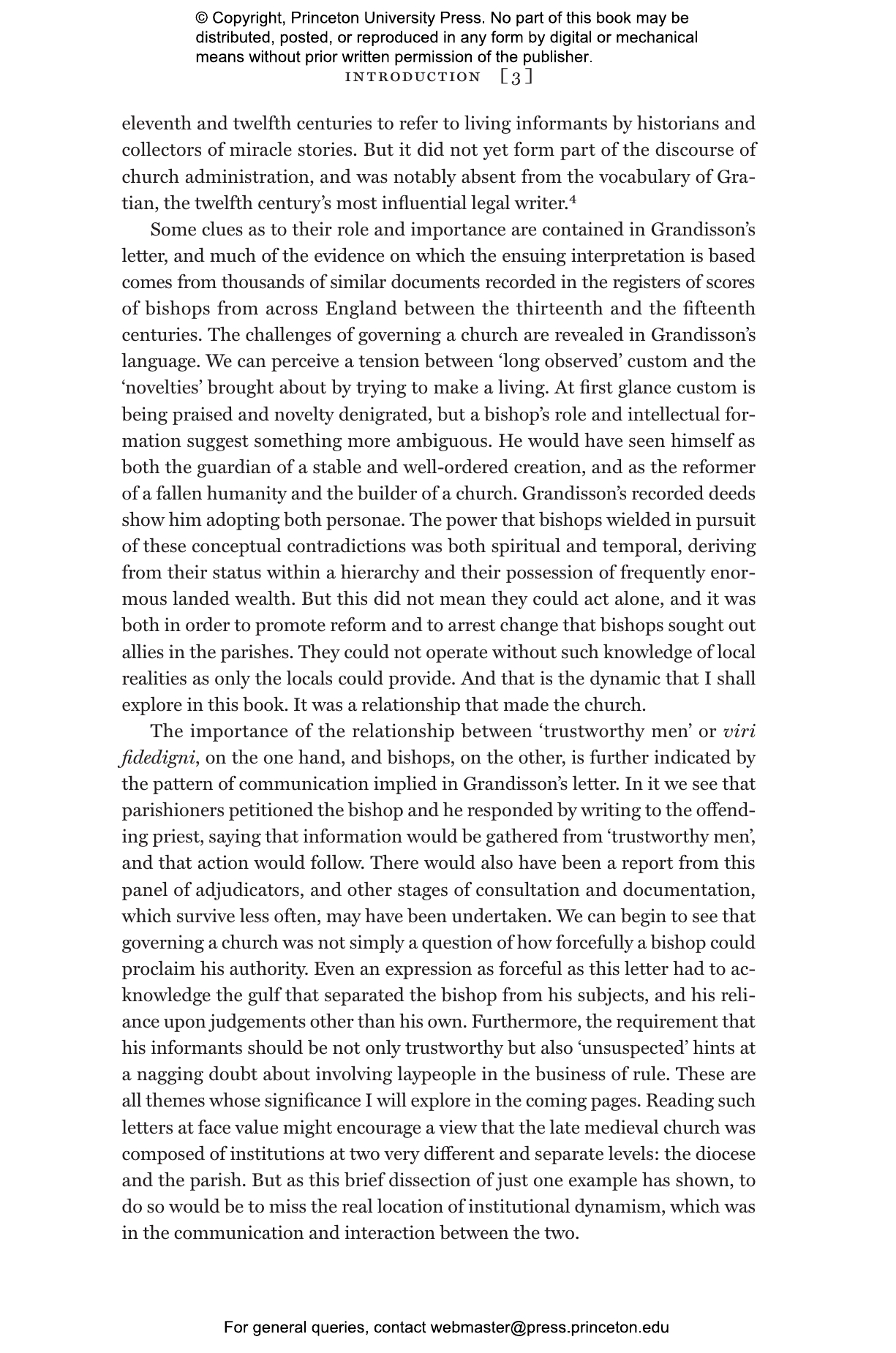 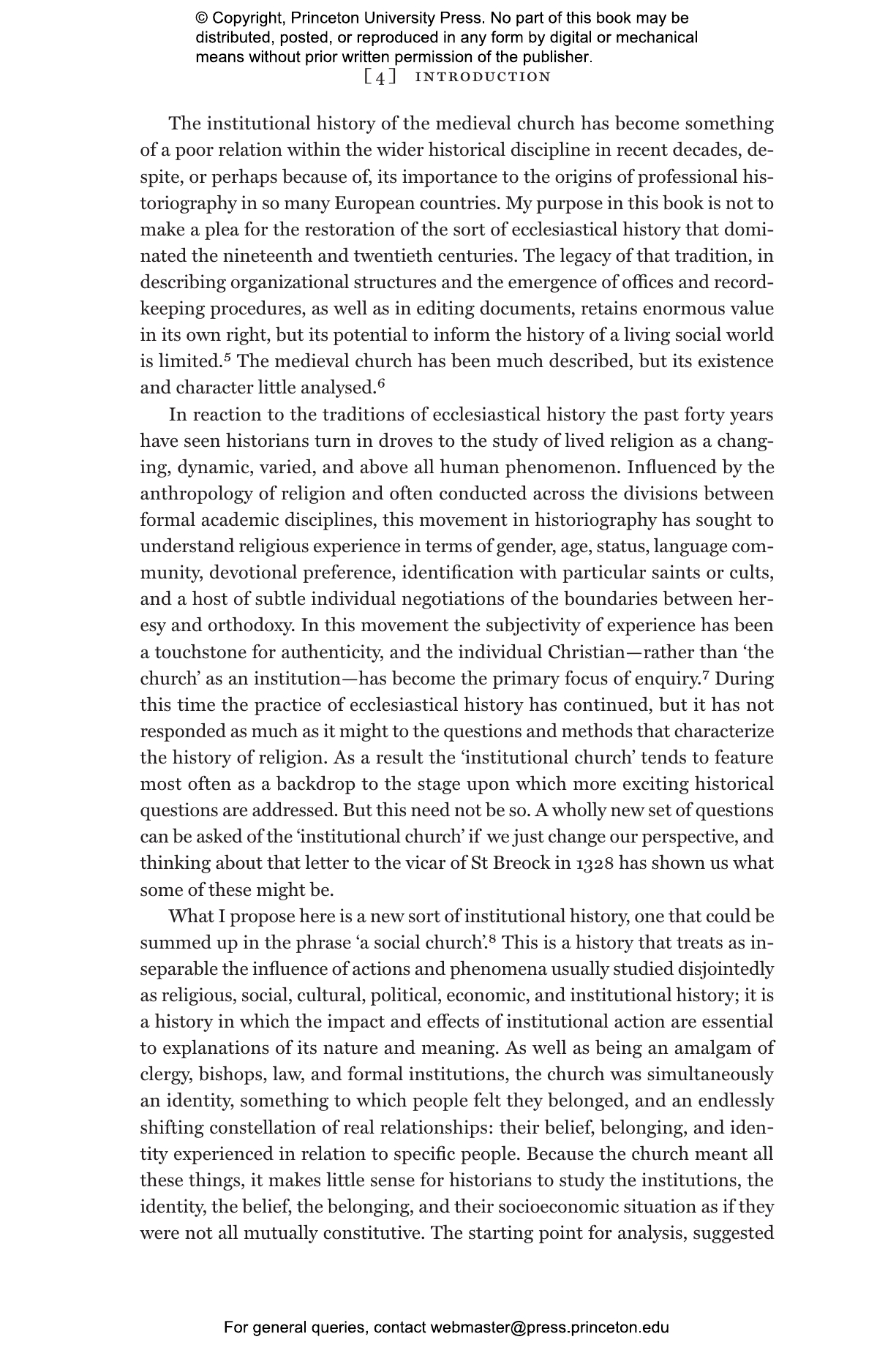 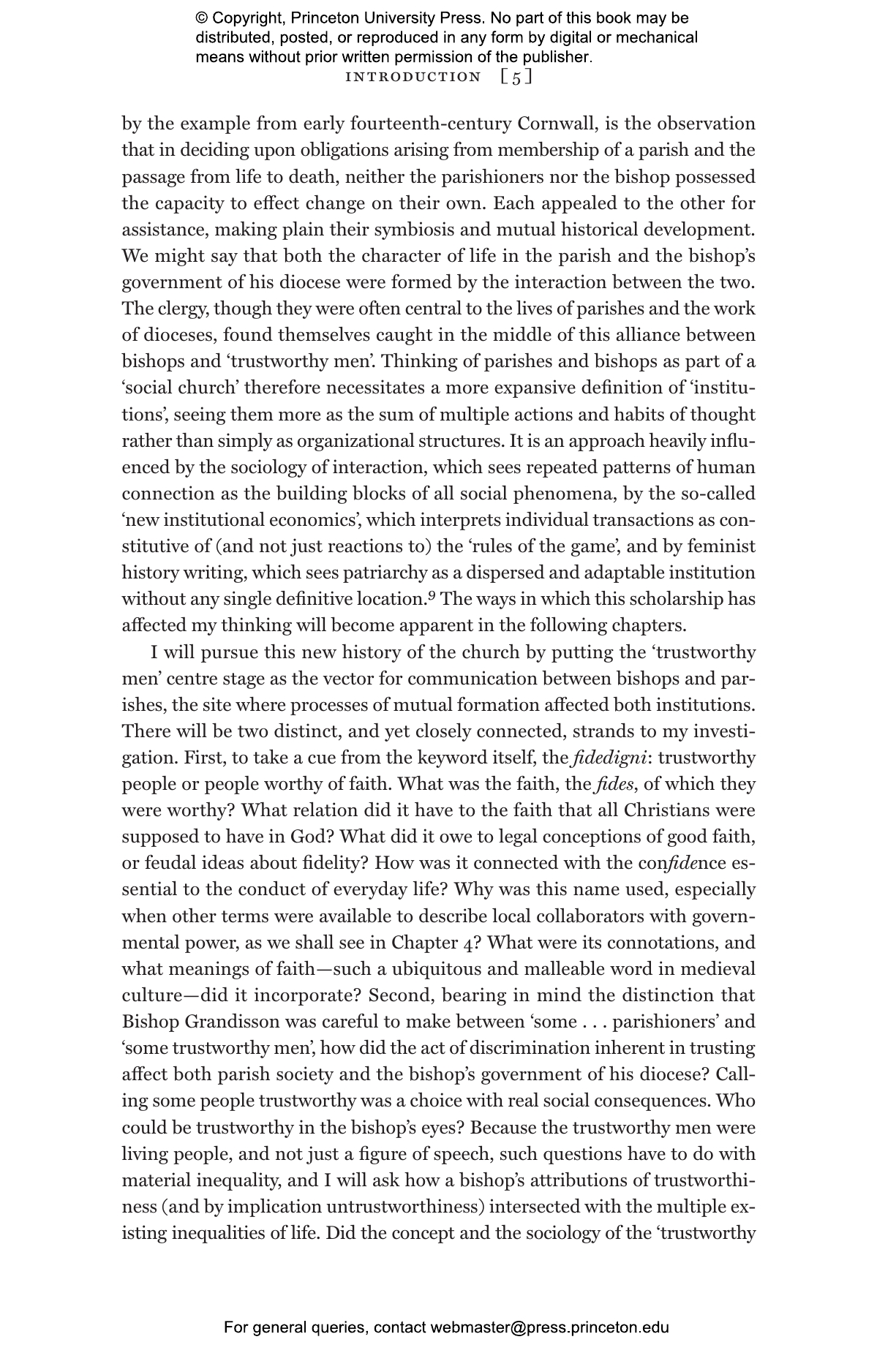 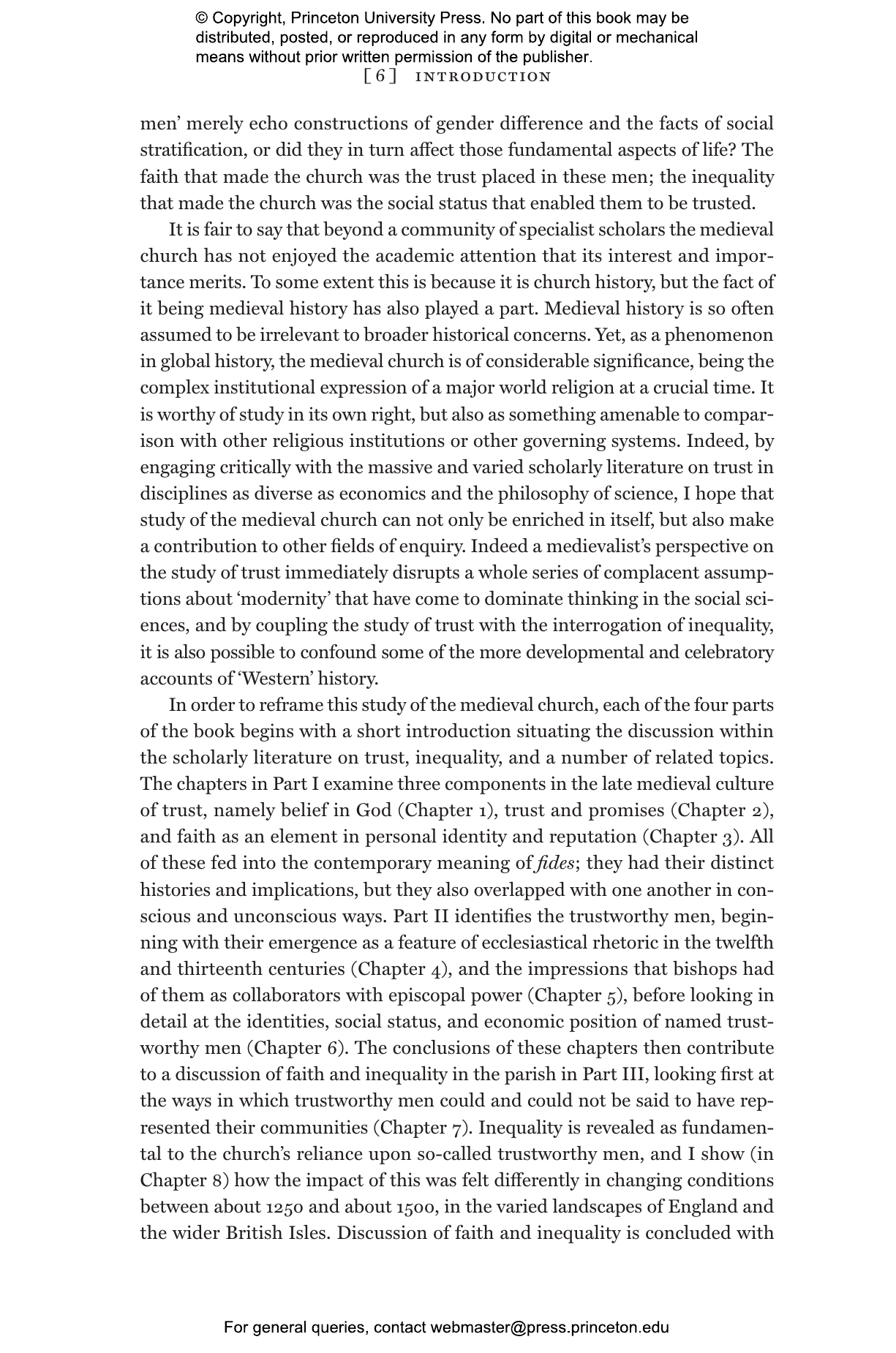 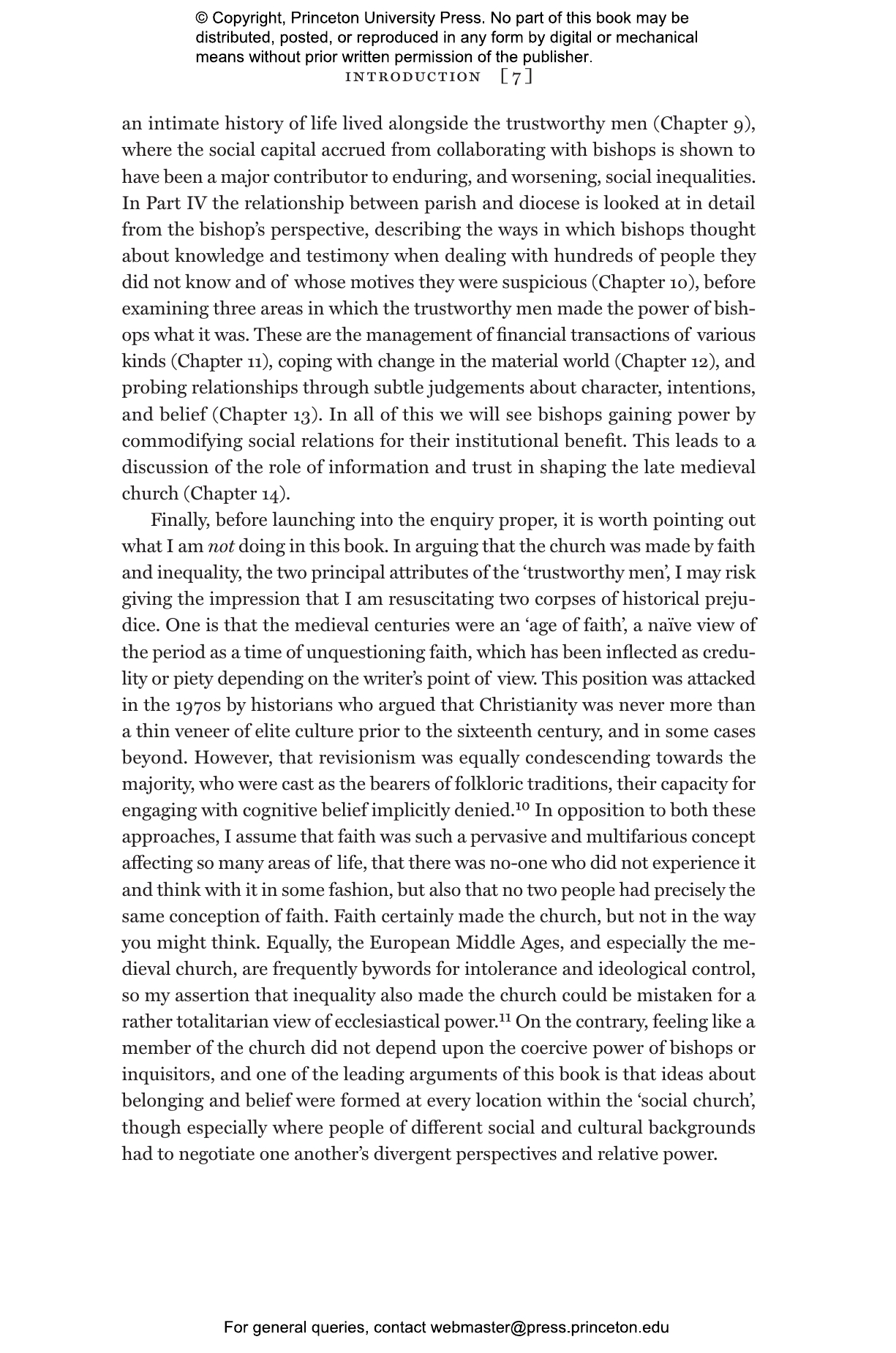 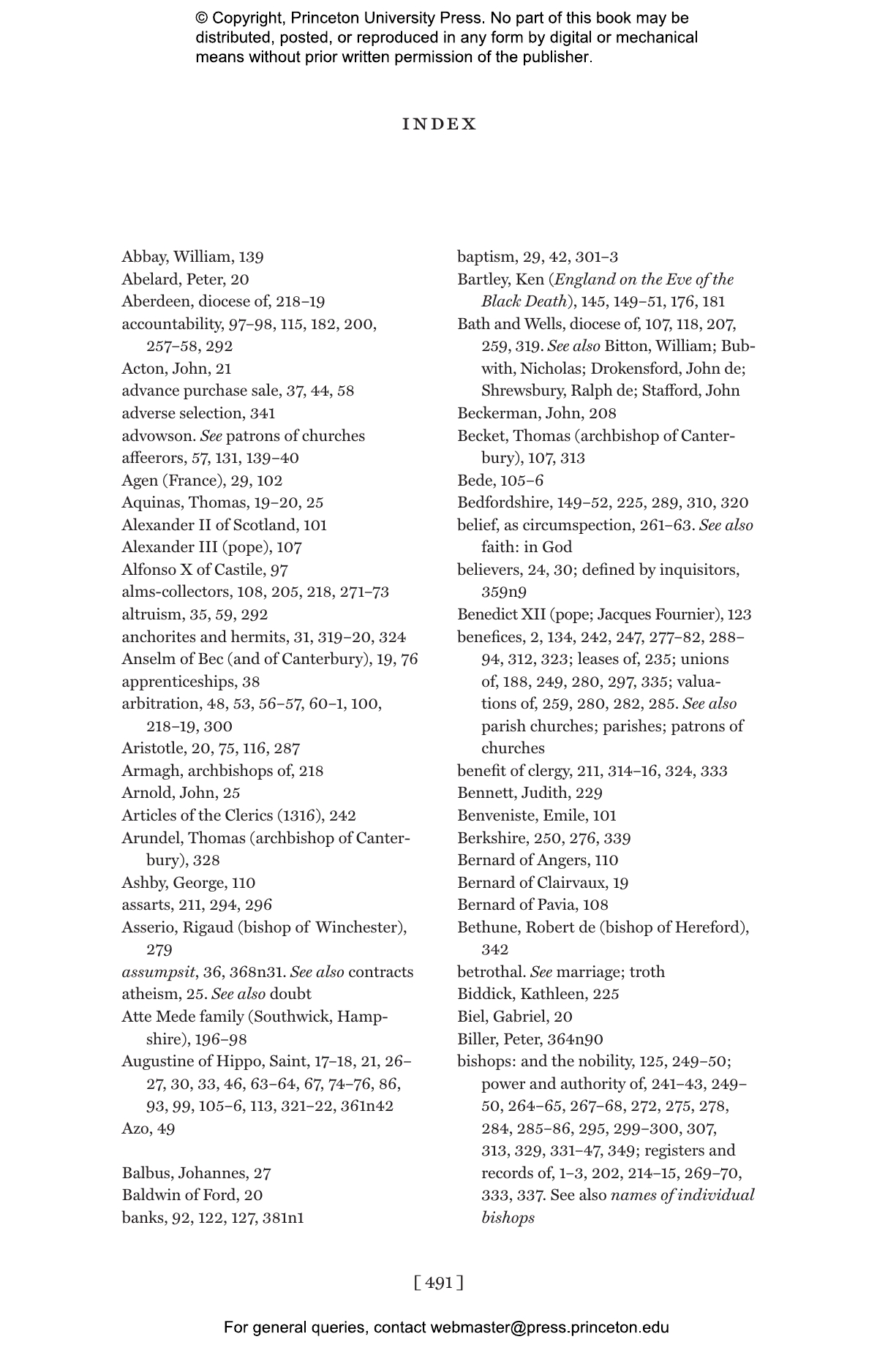 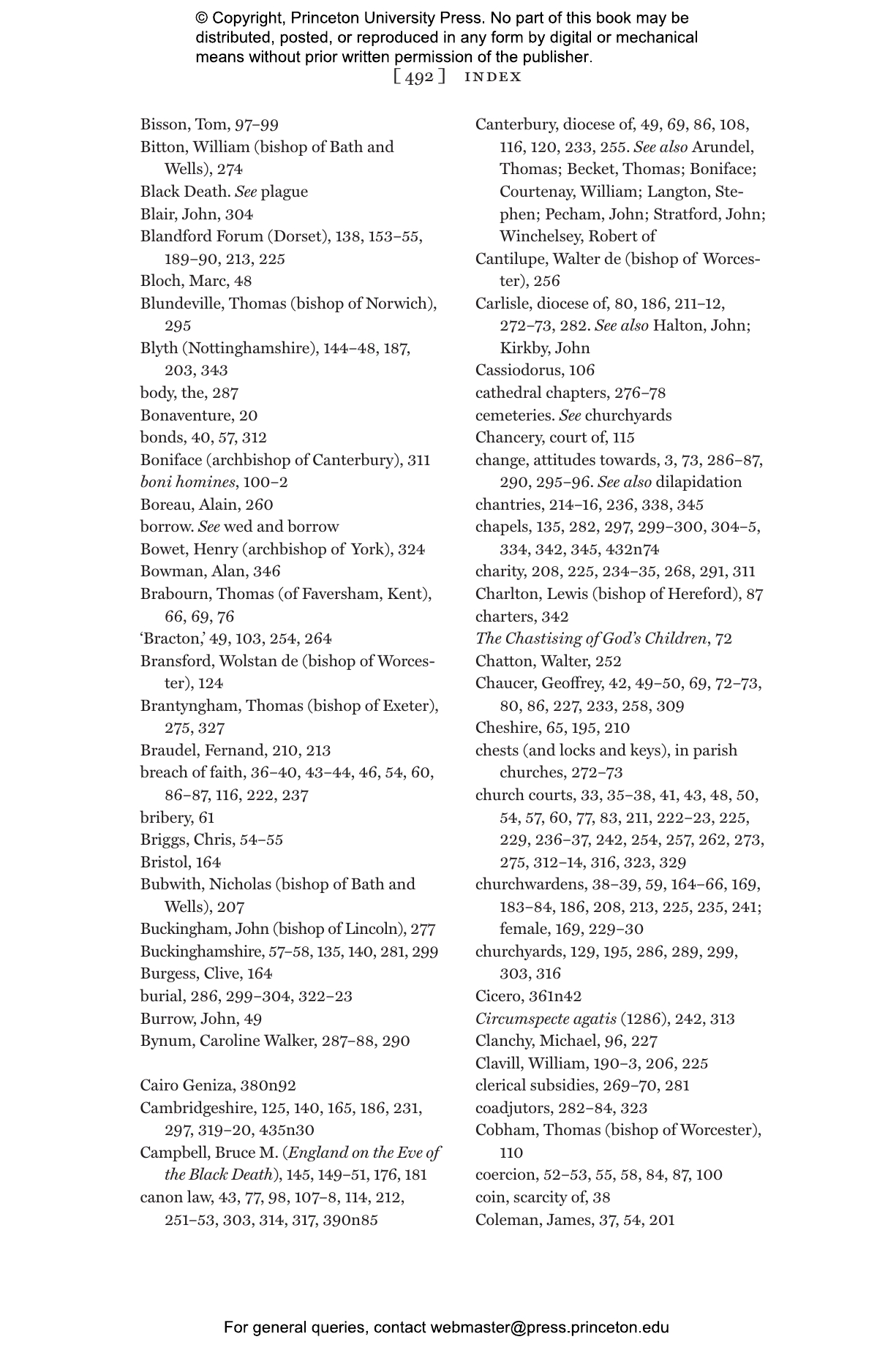 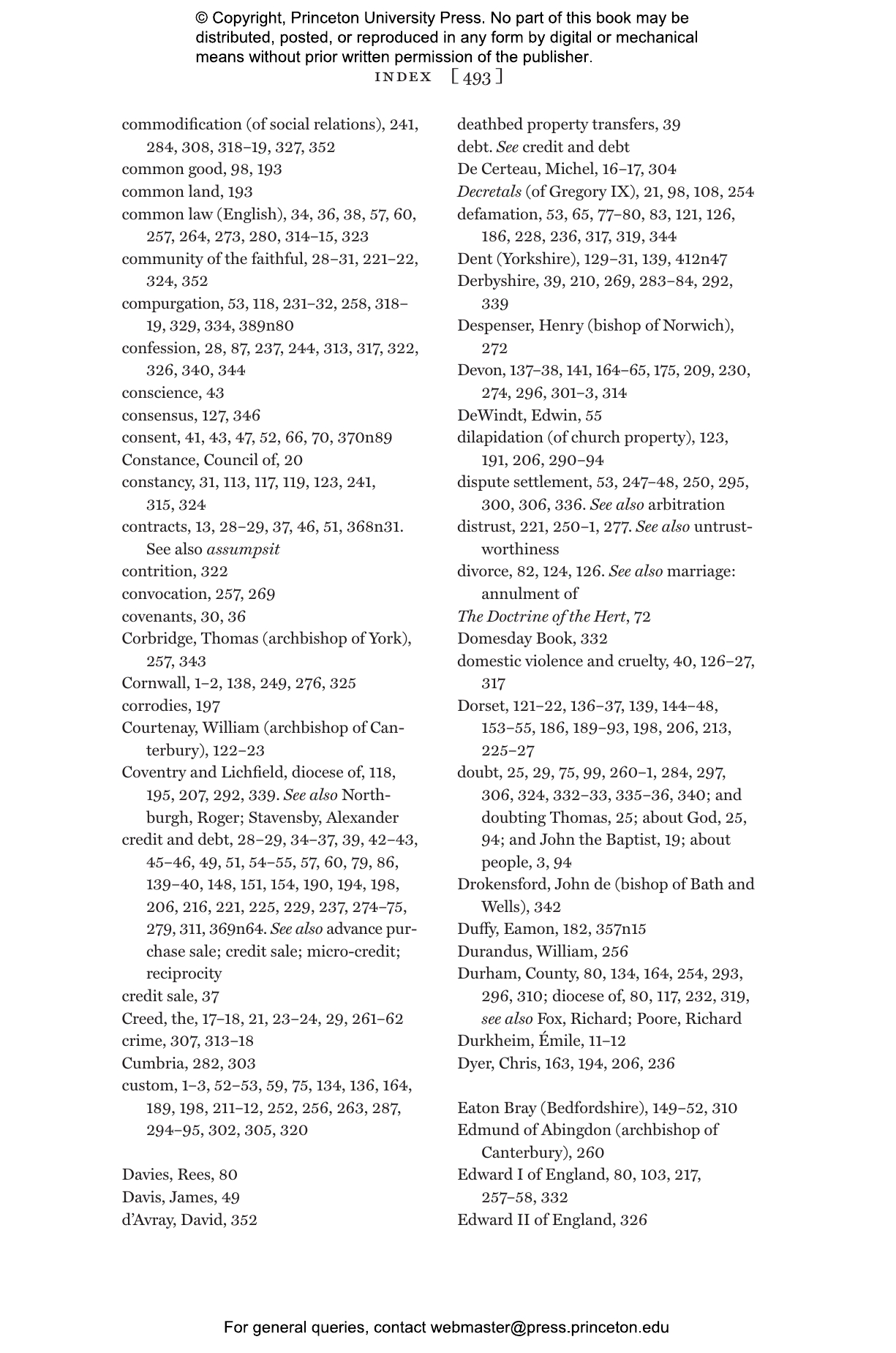 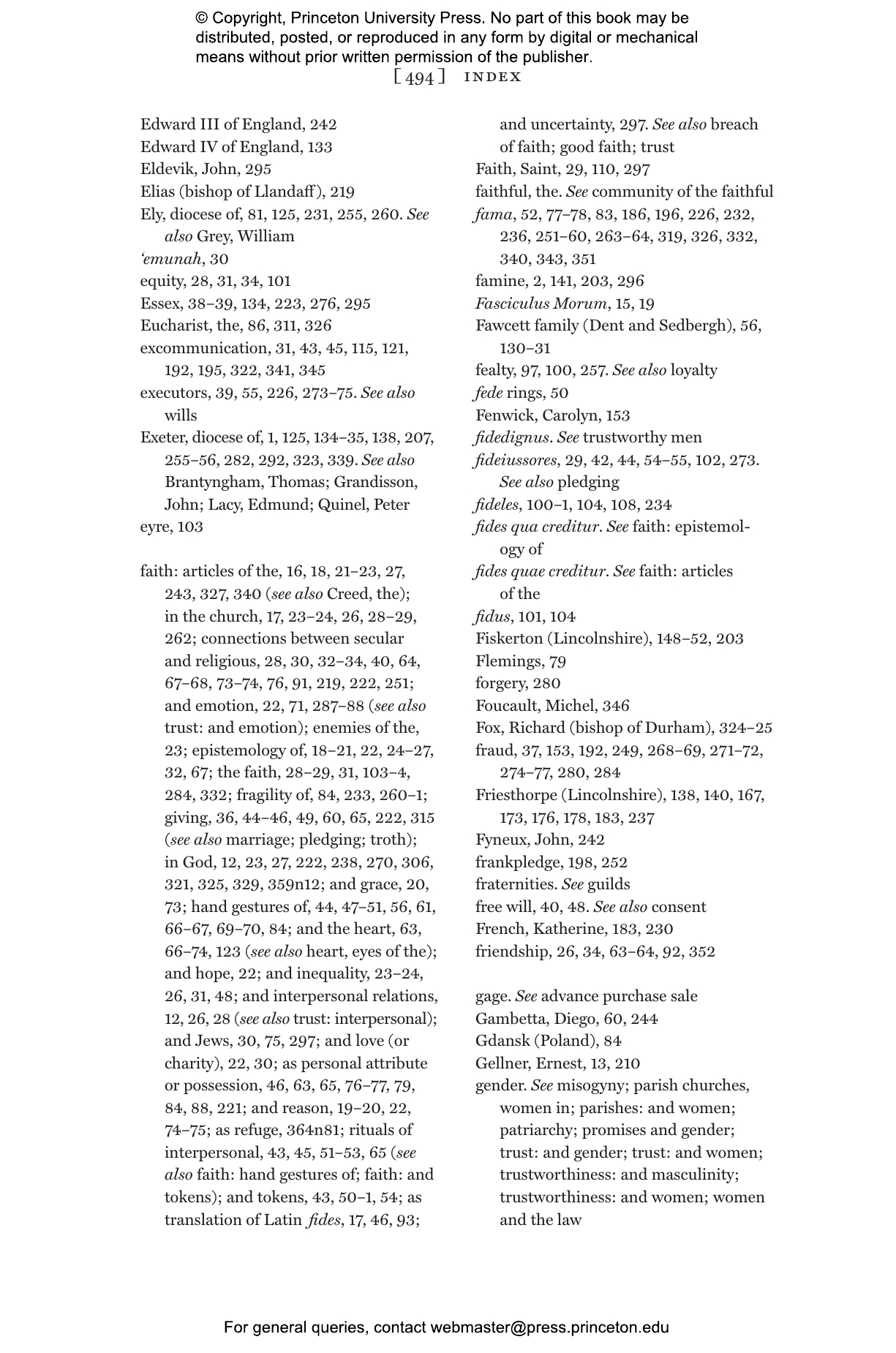 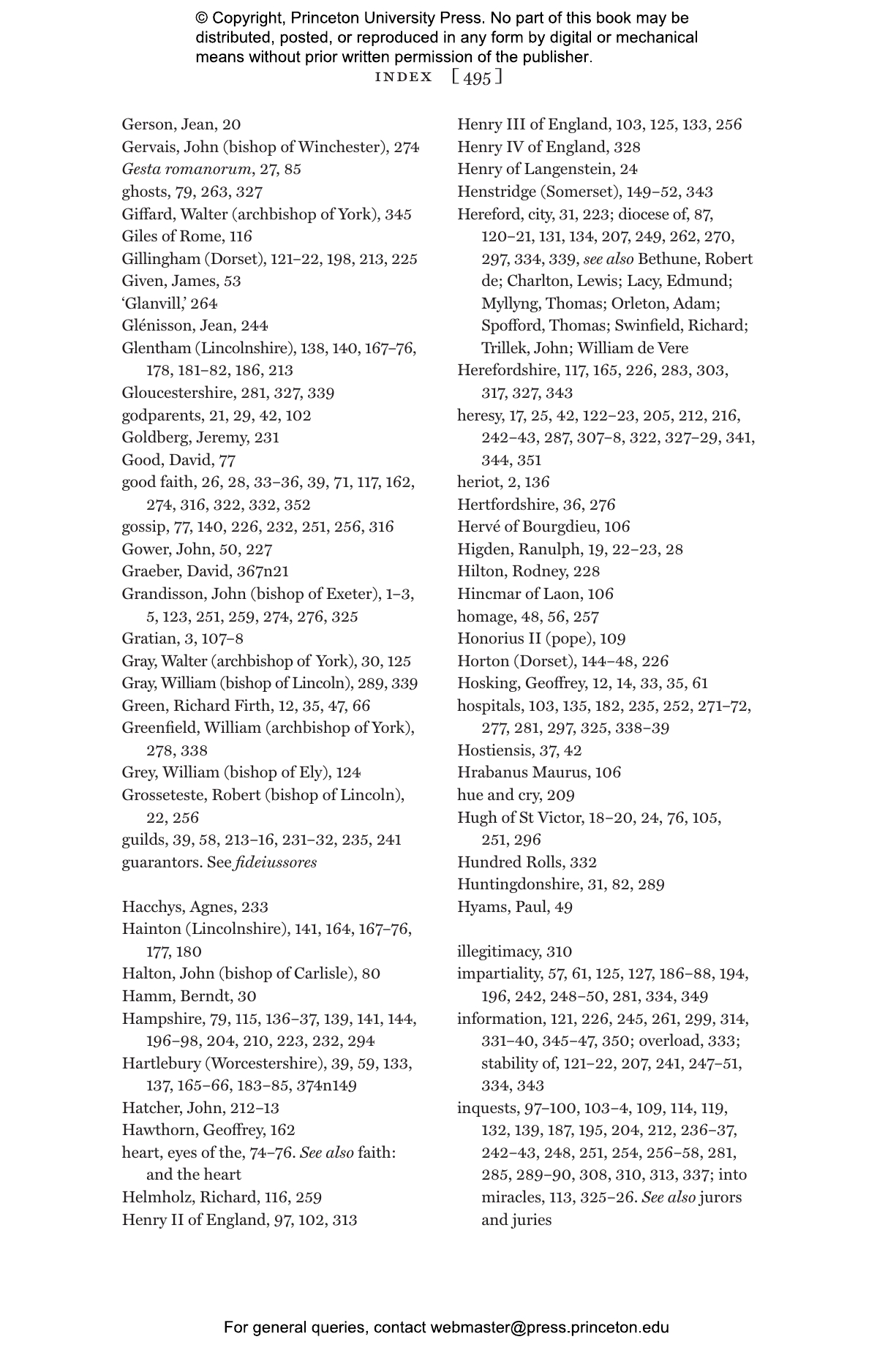 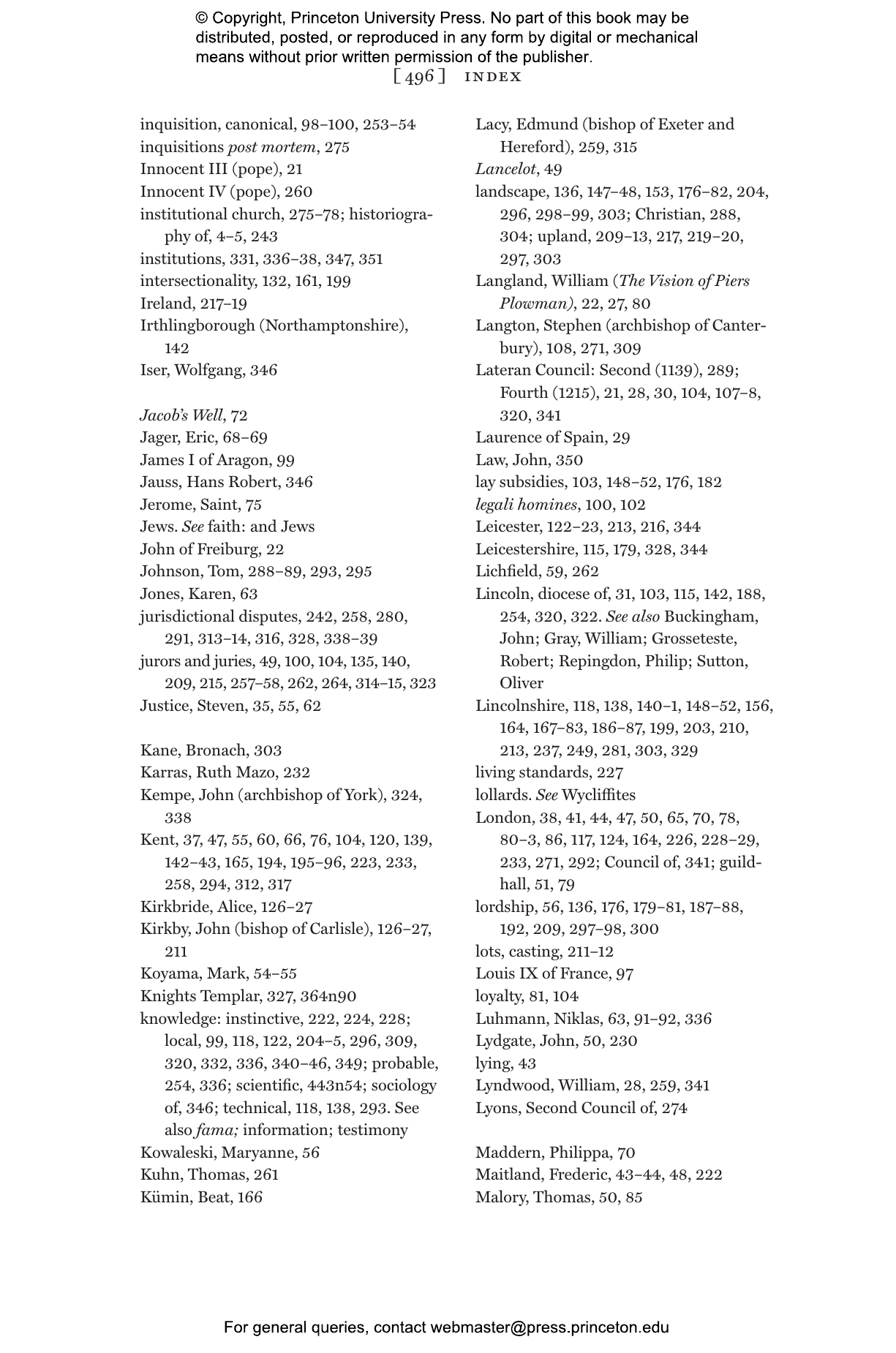 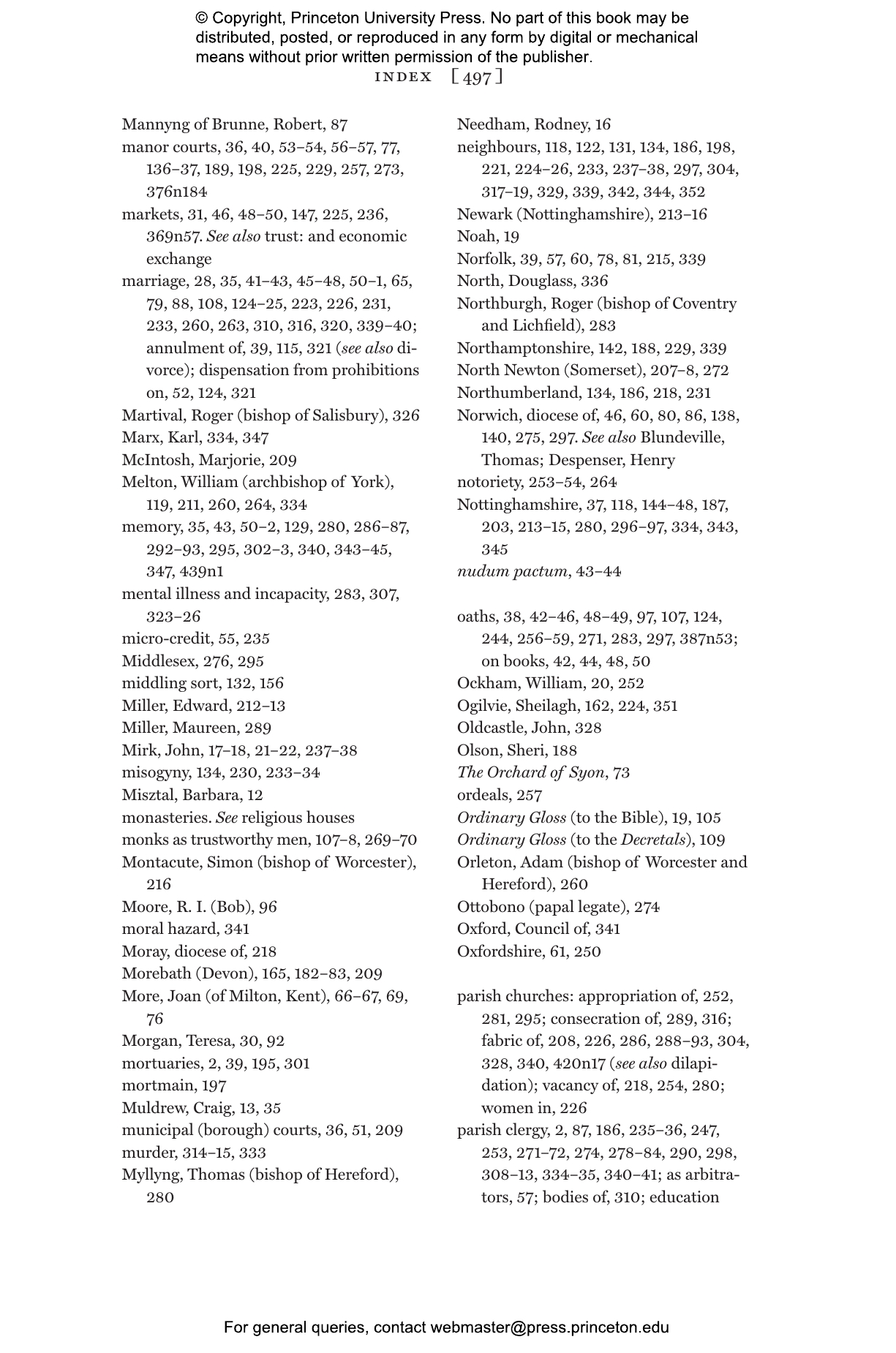 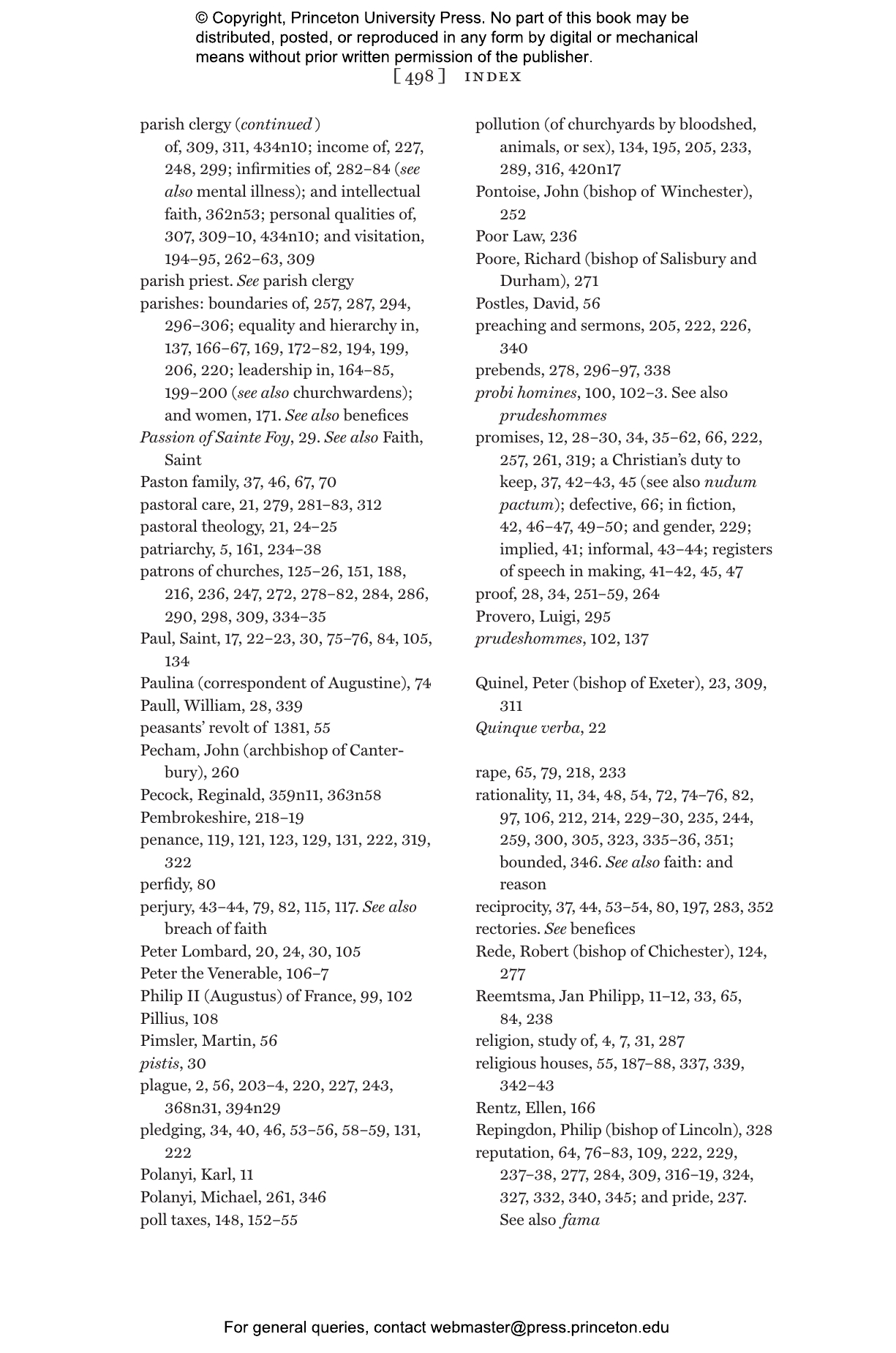 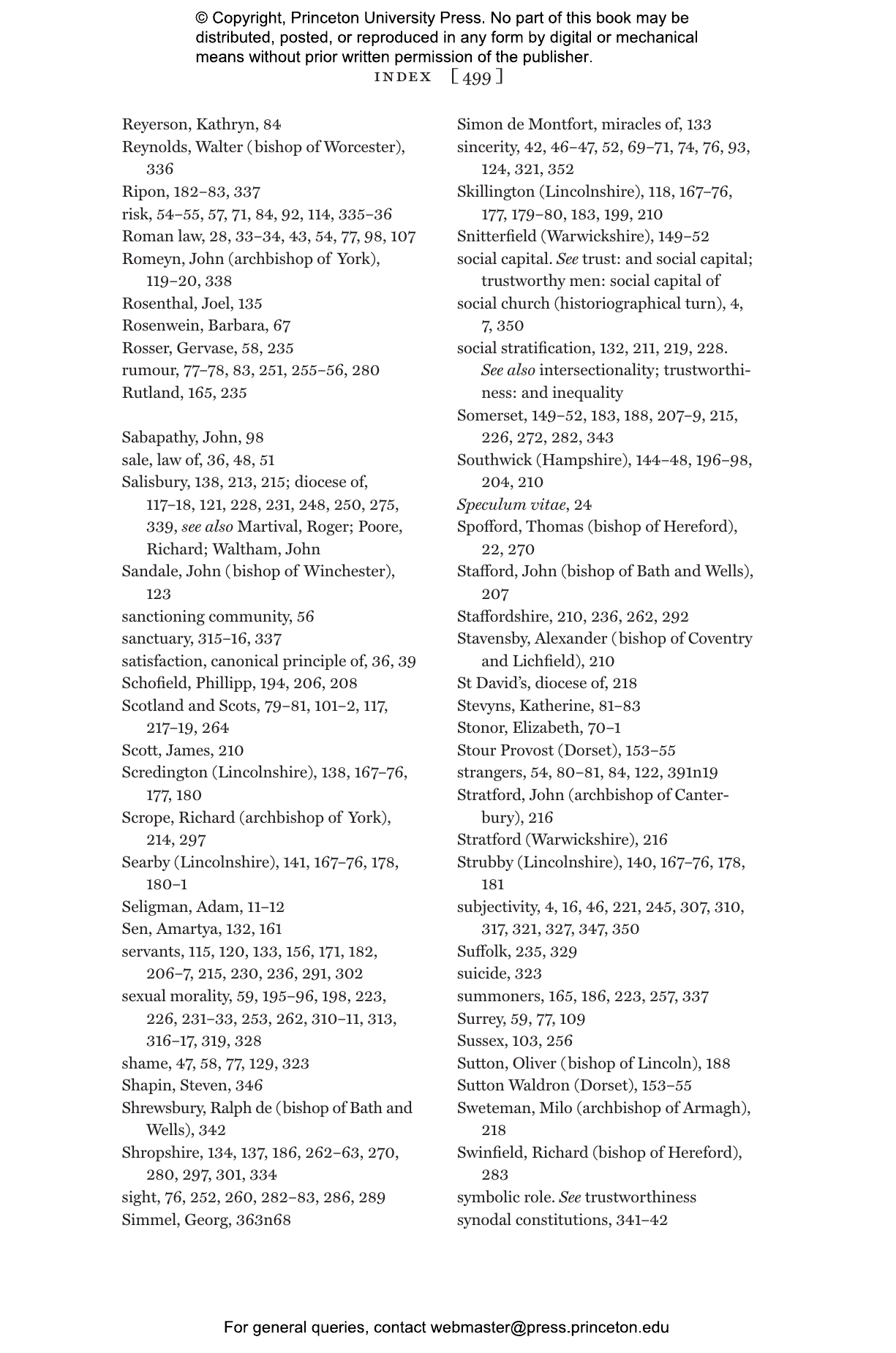 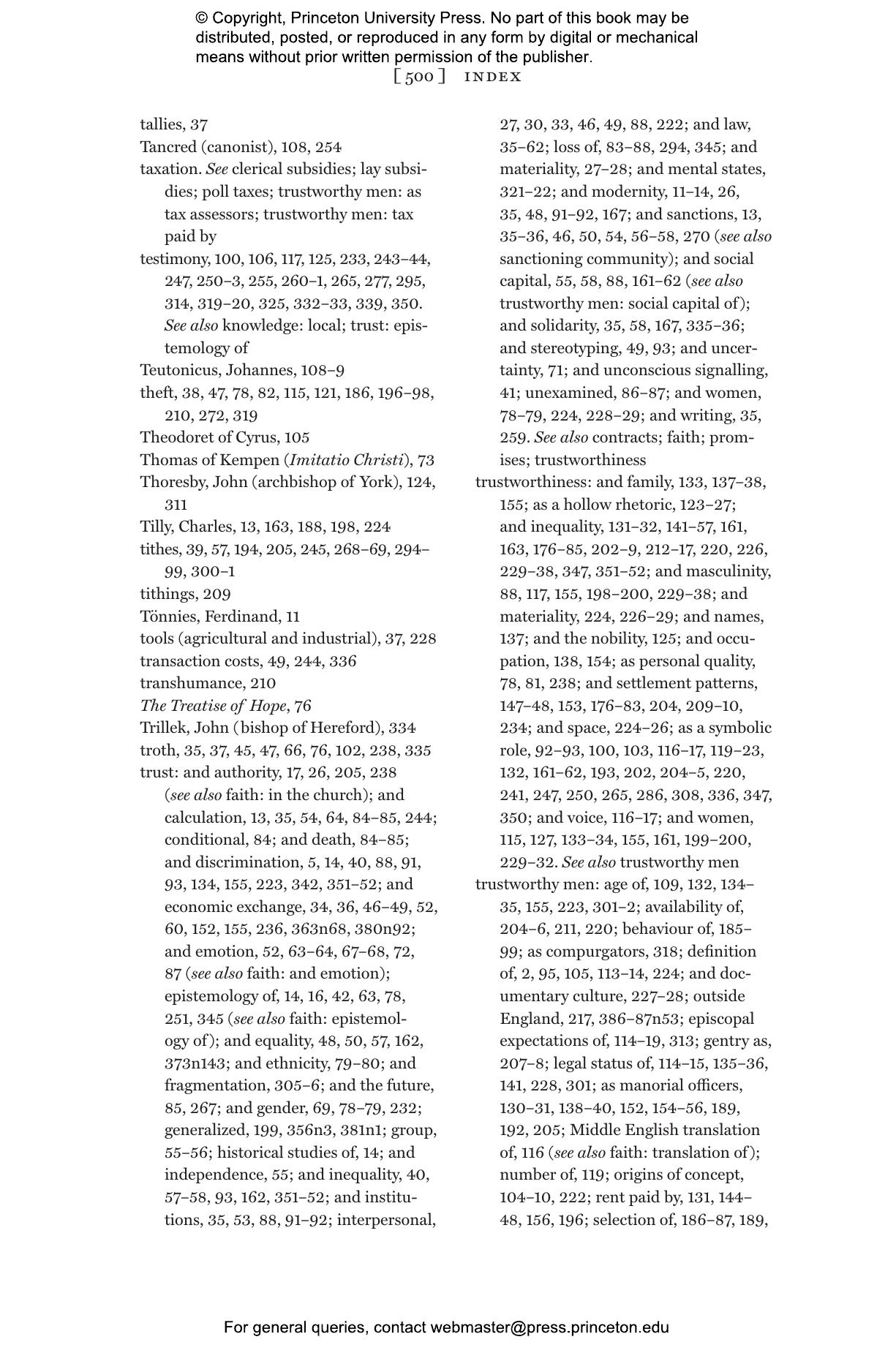 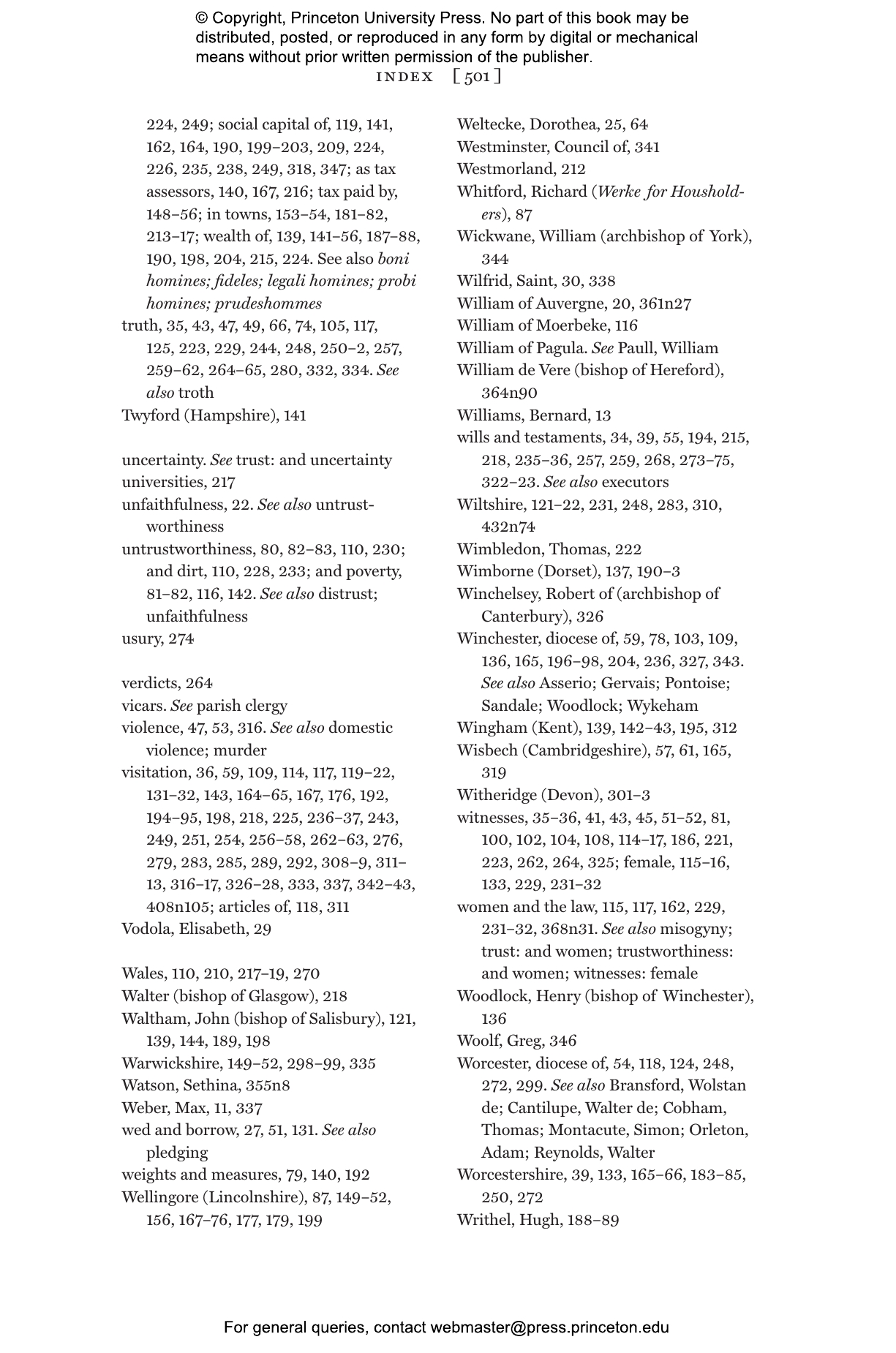 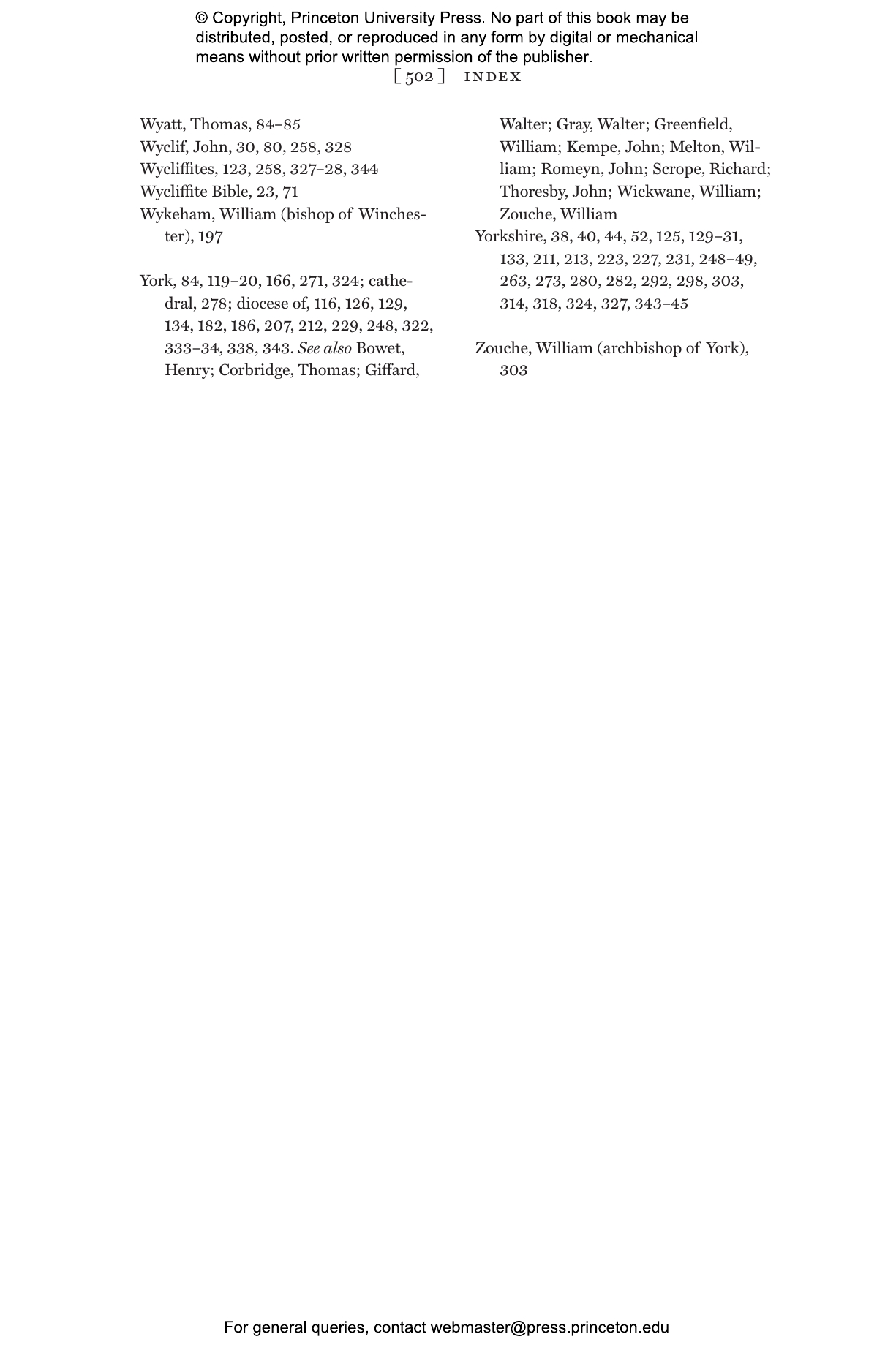 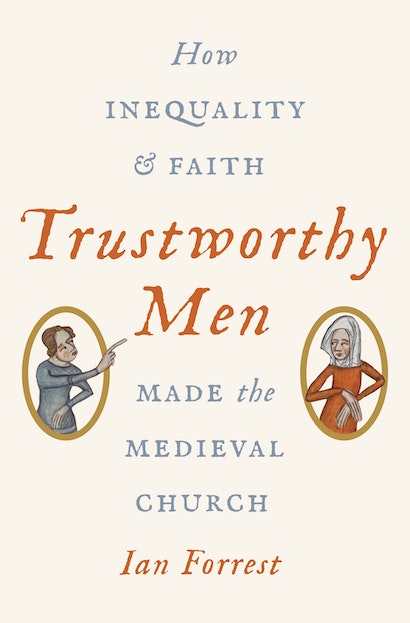 The medieval church was founded on and governed by concepts of faith and trust — but not in the way that is popularly assumed. Offering a radical new interpretation of the institutional church and its social consequences in England, Ian Forrest argues that between 1200 and 1500 the ability of bishops to govern depended on the cooperation of local people known as trustworthy men and shows how the combination of inequality and faith helped make the medieval church.

Trustworthy men (in Latin, viri fidedigni) were jurors, informants, and witnesses who represented their parishes when bishops needed local knowledge or reliable collaborators. Their importance in church courts, at inquests, and during visitations grew enormously between the thirteenth and fifteenth centuries. The church had to trust these men, and this trust rested on the complex and deep-rooted cultures of faith that underpinned promises and obligations, personal reputation and identity, and belief in God. But trust also had a dark side. For the church to discriminate between the trustworthy and untrustworthy was not to identify the most honest Christians but to find people whose status ensured their word would not be contradicted. This meant men rather than women, and—usually—the wealthier tenants and property holders in each parish.

Trustworthy Men illustrates the ways in which the English church relied on and deepened inequalities within late medieval society, and how trust and faith were manipulated for political ends.

Ian Forrest is fellow and tutor in history at Oriel College, University of Oxford. He is the author of The Detection of Heresy in Late Medieval England.

"[A] riveting social history full of vivid characters in everyday wrangles and powerful reflections on trust and faith."—Teresa Morgan, The Tablet

"Trustworthy Men presents a captivating portrait. . . . [It] opens a window onto a fascinating aspect of medieval life, and the study is a model for scholarship across specializations."—G.E. Myers, Choice

“In Trustworthy Men, we have a new, radical, and utterly compelling understanding of the Middle Ages. Ian Forrest explores the church as a ‘social church’ whose institutional workings made medieval communities enduringly unequal. As bishops reached ever more deeply into the fields and households of English parishioners after ca.1200, they came to depend on local enforcers of their interests—the eponymous trustworthy men—whose power, knowledge, and wealth coerced lesser men and women to the will and interest of prelates who were at once shepherds and landlords.”—Miri Rubin, author of The Middle Ages: A Very Short Introduction

"Straddling social and ecclesiastical history, and the history of ideas, this elegant book investigates Episcopal bishops' use of lay ‘trustworthy men' as witnesses and informants for various actions within the diocese. The themes explored are of profound importance, with very wide implications not only for those who work on the medieval church, but also for anyone interested in medieval society and governance."—John H. Arnold, University of Cambridge

"A new history of the late medieval church in England, this brilliant book is a rare beast, grounded in extensive theoretical and empirical research. A masterpiece of historical thinking, it will be widely influential."—Frances Andrews, University of St Andrews

“Ian Forrest’s richly detailed history provides not just a magisterial narrative of an institution, but also shows how that institution reinforced social trust between individuals in the wider society. Even more originally, Forrest demonstrates how its ability to play that role depended on relations of trust between the institution and the individuals who functioned within it. This book is an important contribution to our understanding of the way in which institutional trust laid the foundations of the modern world.”—Paul Seabright, author of The Company of Strangers