A survey of ancient Egyptian mathematics across three thousand years 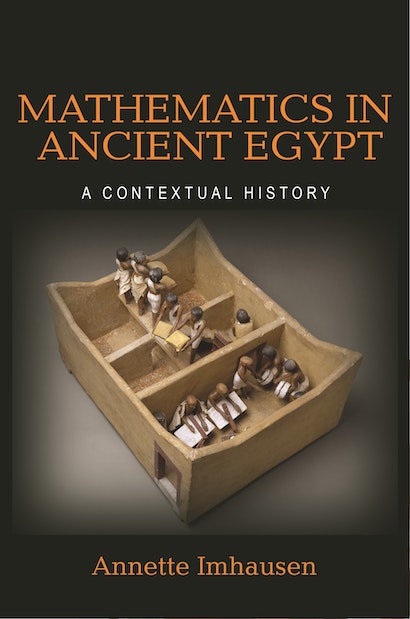 Mathematics in Ancient Egypt traces the development of Egyptian mathematics, from the end of the fourth millennium BC—and the earliest hints of writing and number notation—to the end of the pharaonic period in Greco-Roman times. Drawing from mathematical texts, architectural drawings, administrative documents, and other sources, Annette Imhausen surveys three thousand years of Egyptian history to present an integrated picture of theoretical mathematics in relation to the daily practices of Egyptian life and social structures.

Imhausen shows that from the earliest beginnings, pharaonic civilization used numerical techniques to efficiently control and use their material resources and labor. Even during the Old Kingdom, a variety of metrological systems had already been devised. By the Middle Kingdom, procedures had been established to teach mathematical techniques to scribes in order to make them proficient administrators for their king. Imhausen looks at counterparts to the notation of zero, suggests an explanation for the evolution of unit fractions, and analyzes concepts of arithmetic techniques. She draws connections and comparisons to Mesopotamian mathematics, examines which individuals in Egyptian society held mathematical knowledge, and considers which scribes were trained in mathematical ideas and why.

Of interest to historians of mathematics, mathematicians, Egyptologists, and all those curious about Egyptian culture, Mathematics in Ancient Egypt sheds new light on a civilization’s unique mathematical evolution.

Annette Imhausen is professor of the history of science at Goethe University, Frankfurt. She is the author of Egyptian Algorithms.

"Imhausen's book is a superb introduction into the field of mathematics in ancient Egypt. She has an incredible mastery of the source material and writes it in an objective way. . . . A fascinating introduction to Egyptian mathematics . . . and I would recommend it to anyone interested in the history of mathematics, egyptology, or Egyptian culture."—Alex Criddle, Ancient History Encyclopedia

"The book is well written and informative, with copious references to direct readers in further study of this fascinating area of mathematics history."—Choice

"Annette Imhausen has written a well-researched introduction to Egyptian mathematics in antiquity by tracing its development over more than the last 3000 years, from the foundation of the dynasties to the rise of Alexandria as a global hub of ideas during Greek and Roman times."—Christopher Cumo, Canadian Journal of History

"Imhausen is one of the leading contemporary researchers in the mathematics of ancient Egypt and her book, which spans the whole of Egyptian mathematics from the early dynastic periods to the Greco-Roman era, will be the quintessential scholarly work in the field."—Amy Shell-Gellasch, Montgomery College

"A modern, up-to-date, unbiased discussion on ancient Egyptian mathematics, this book is an important contribution to the field. It represents the most recent and best-documented presentation of the subject."—Corinna Rossi, author of Architecture and Mathematics in Ancient Egypt

"Imhausen's book is a superb introduction to the fascinating field of Egyptian mathematics. The work displays an impressive mastery of source material that straddles a range of languages and an enormous timespan, and is filled with impeccable scholarship that is superbly readable. It will become the standard reference for this topic."—Duncan J. Melville, St. Lawrence University