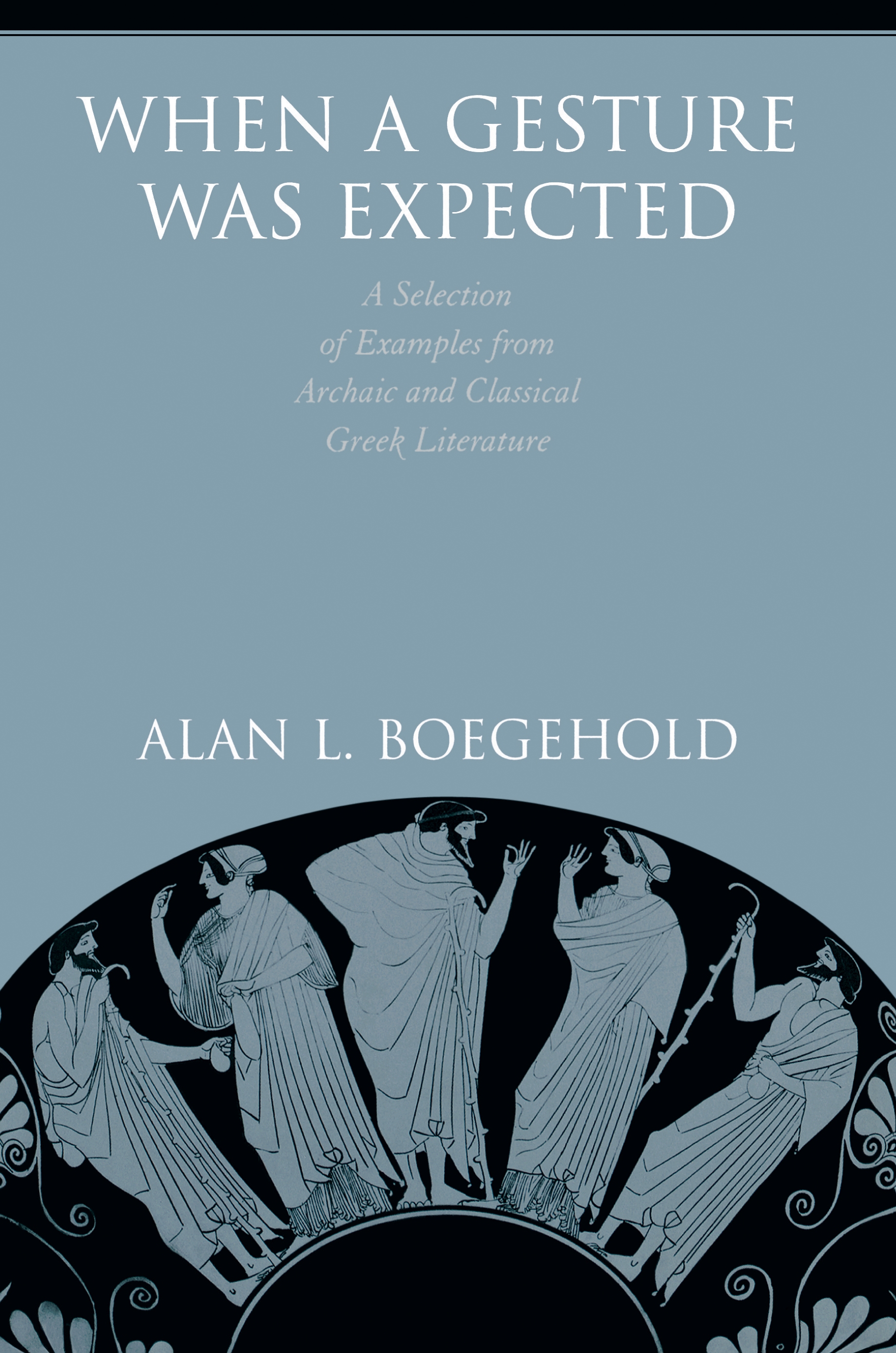 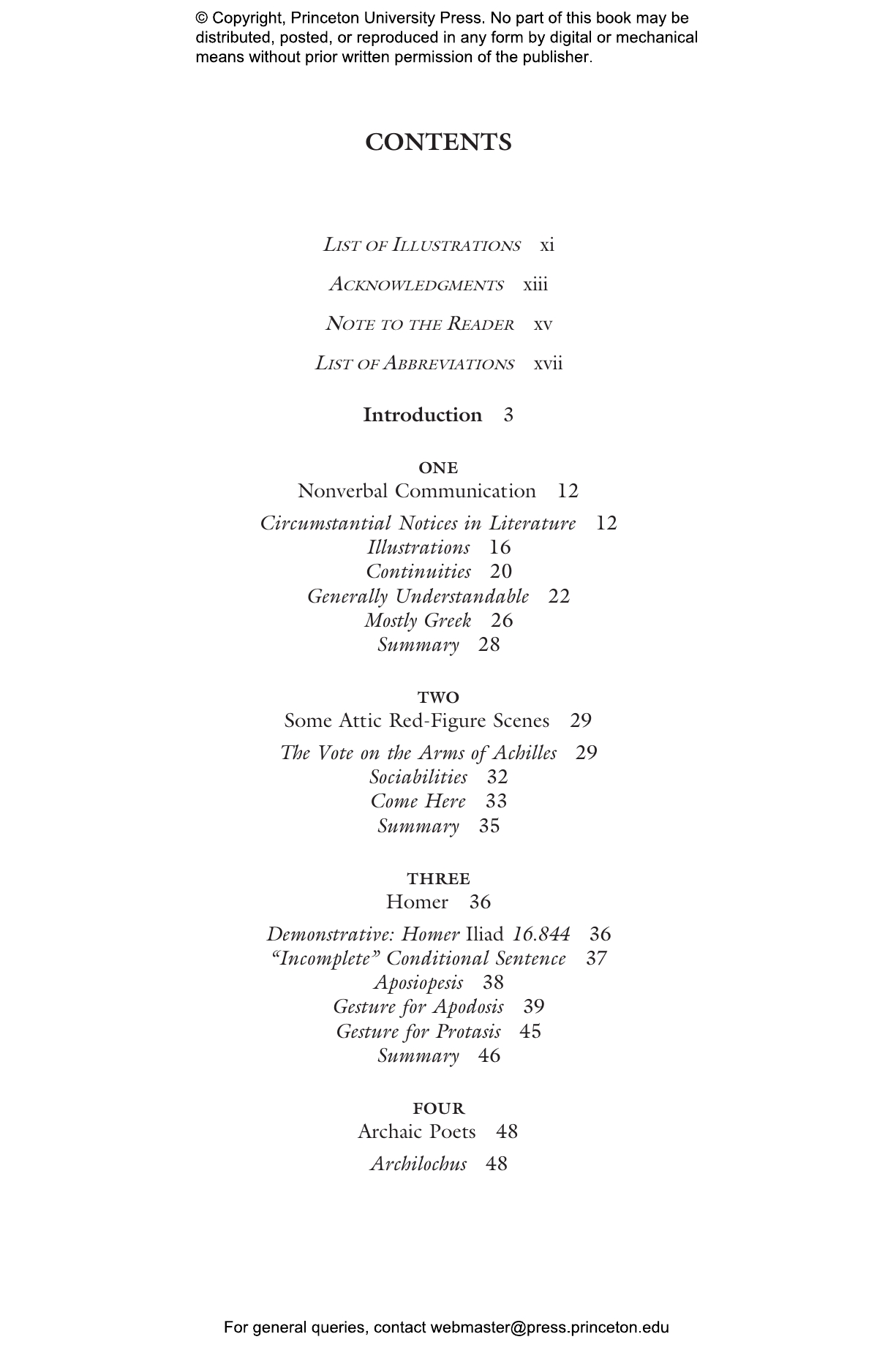 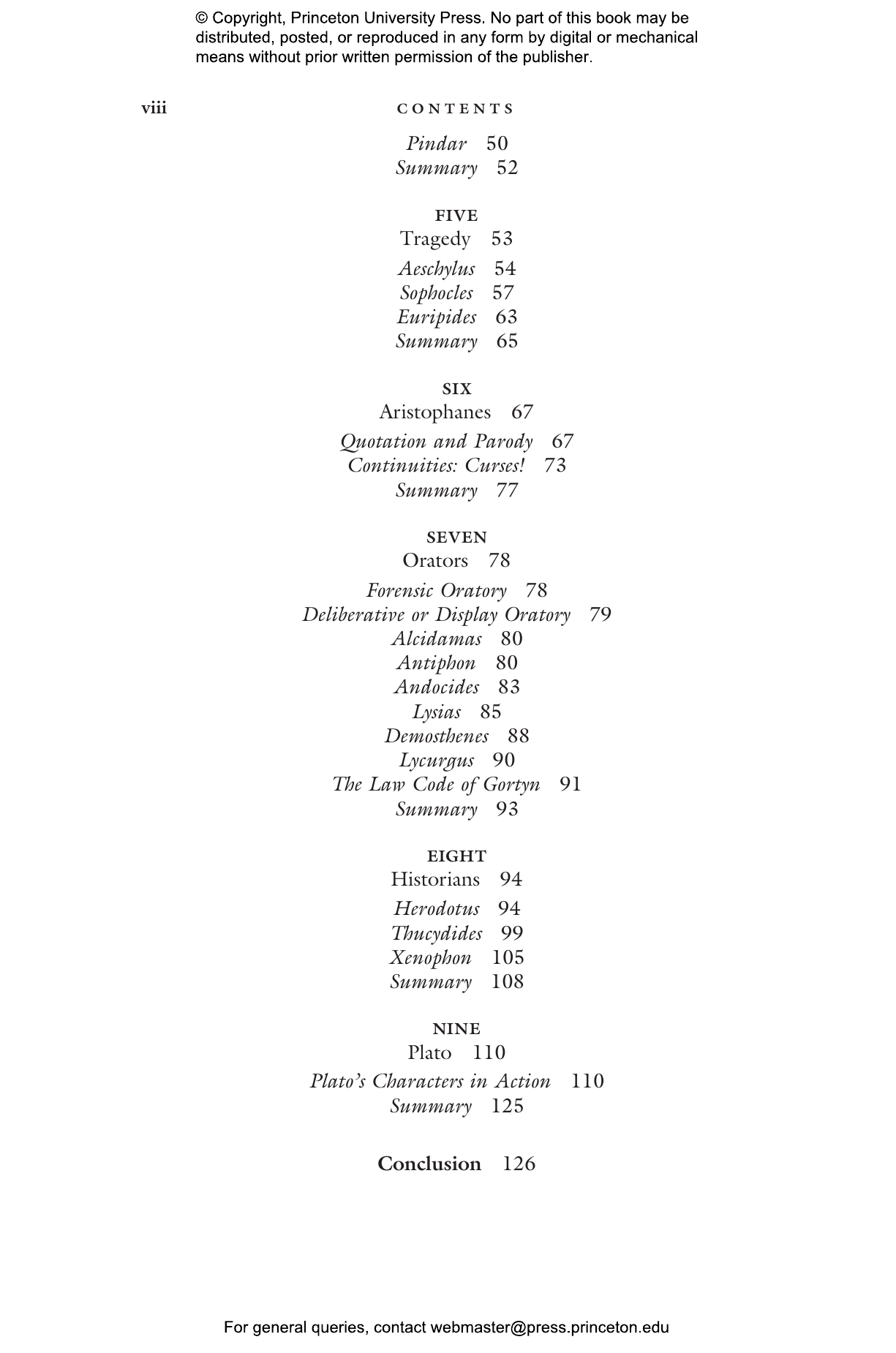 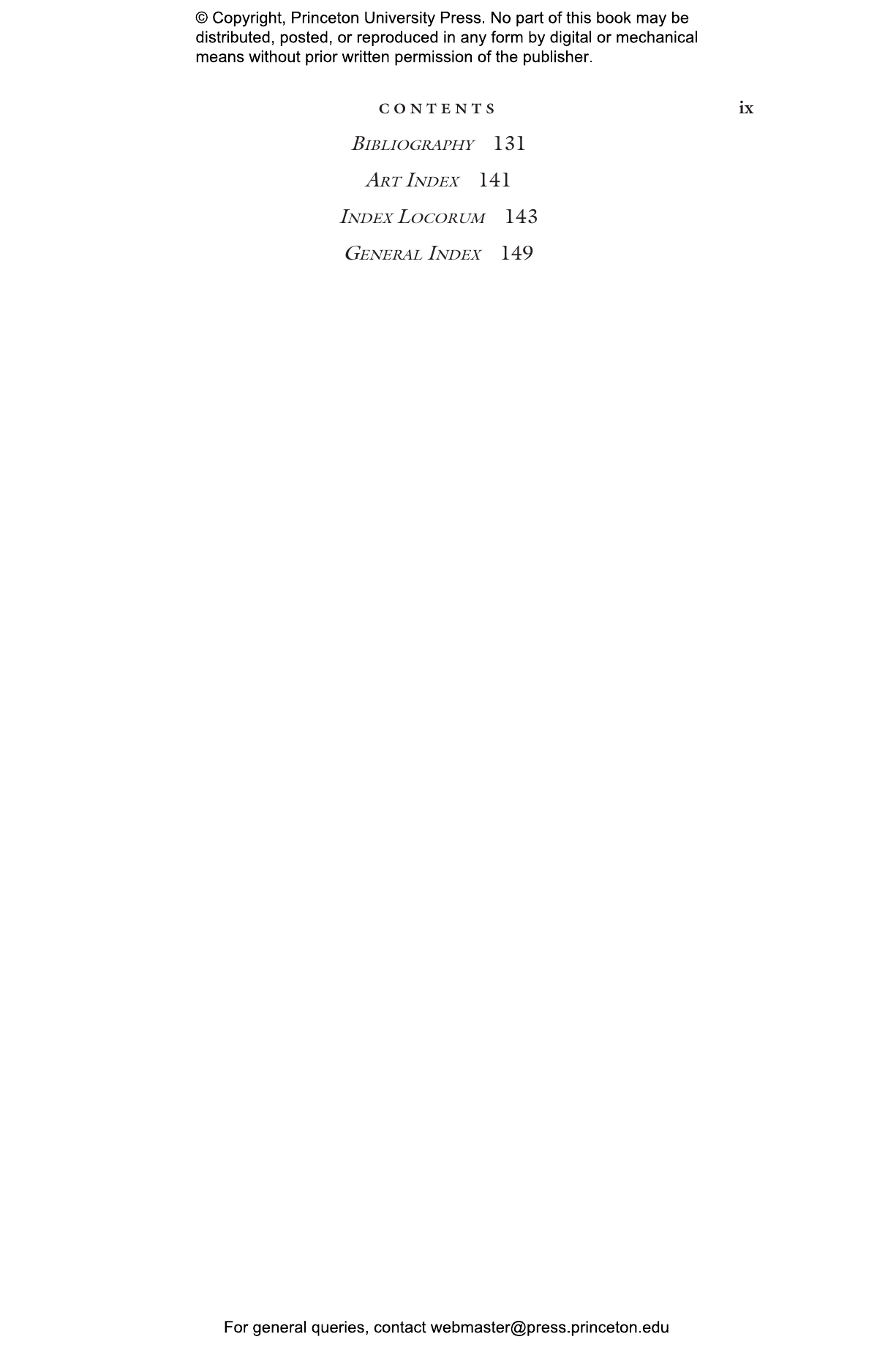 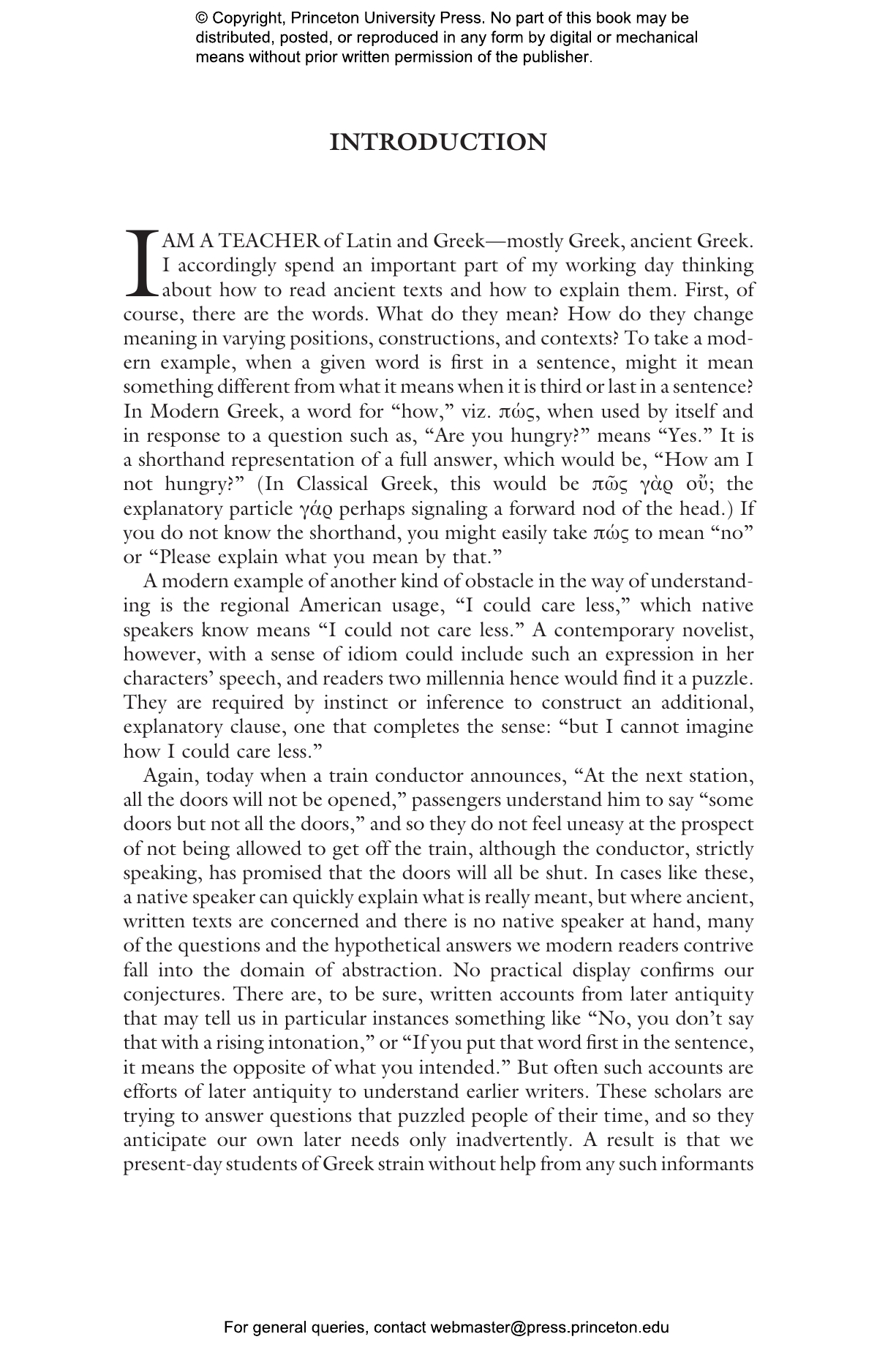 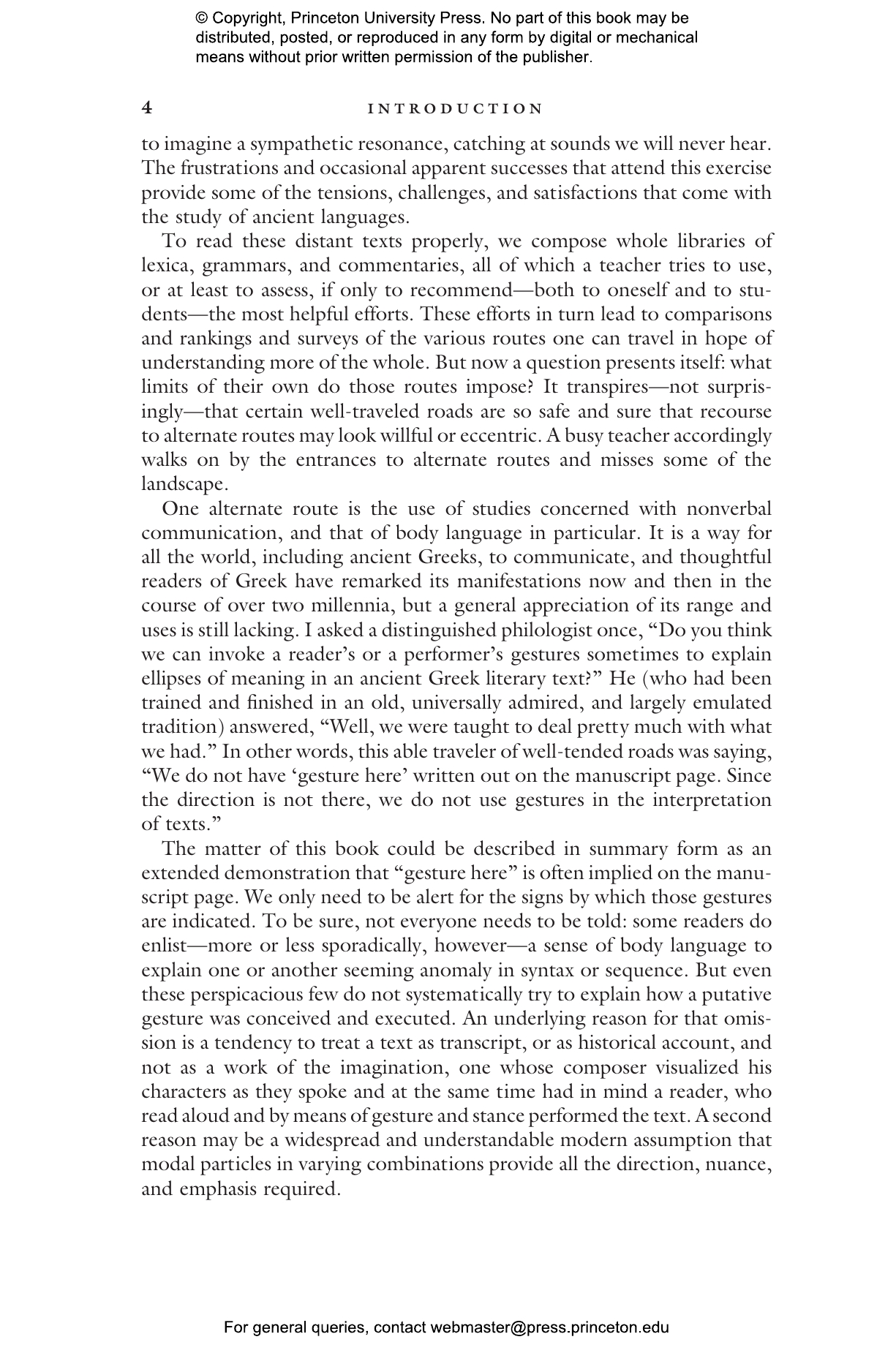 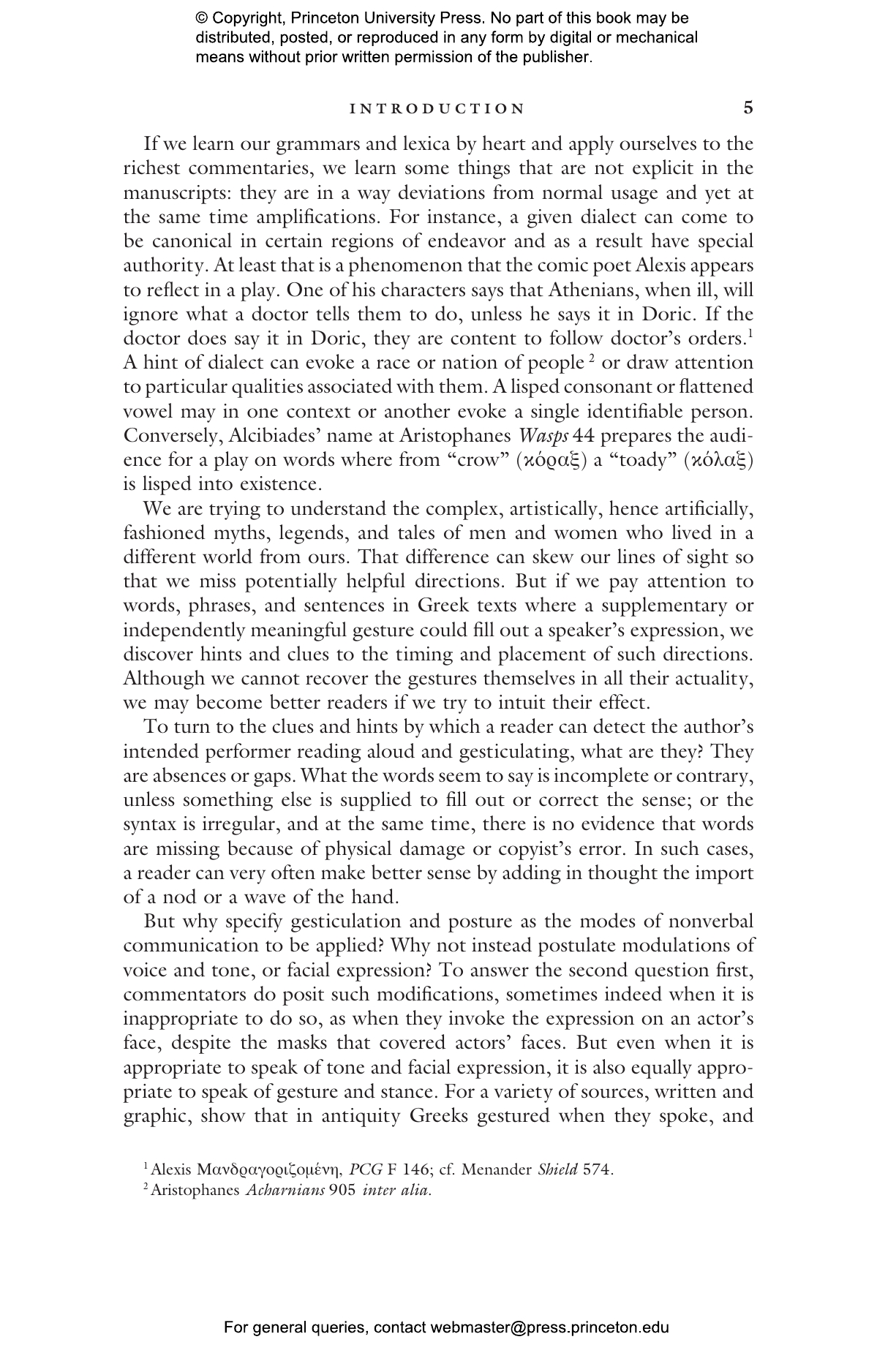 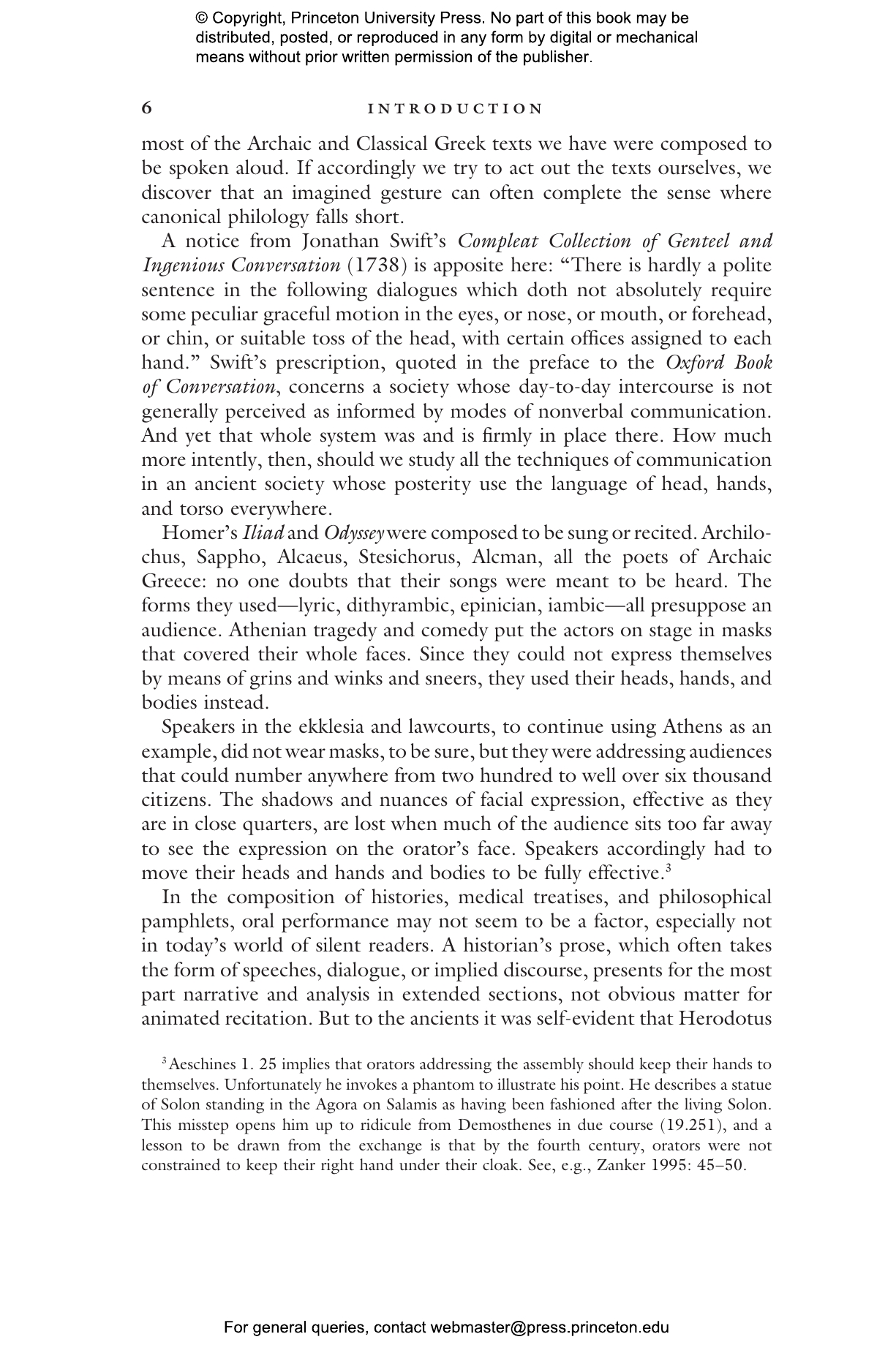 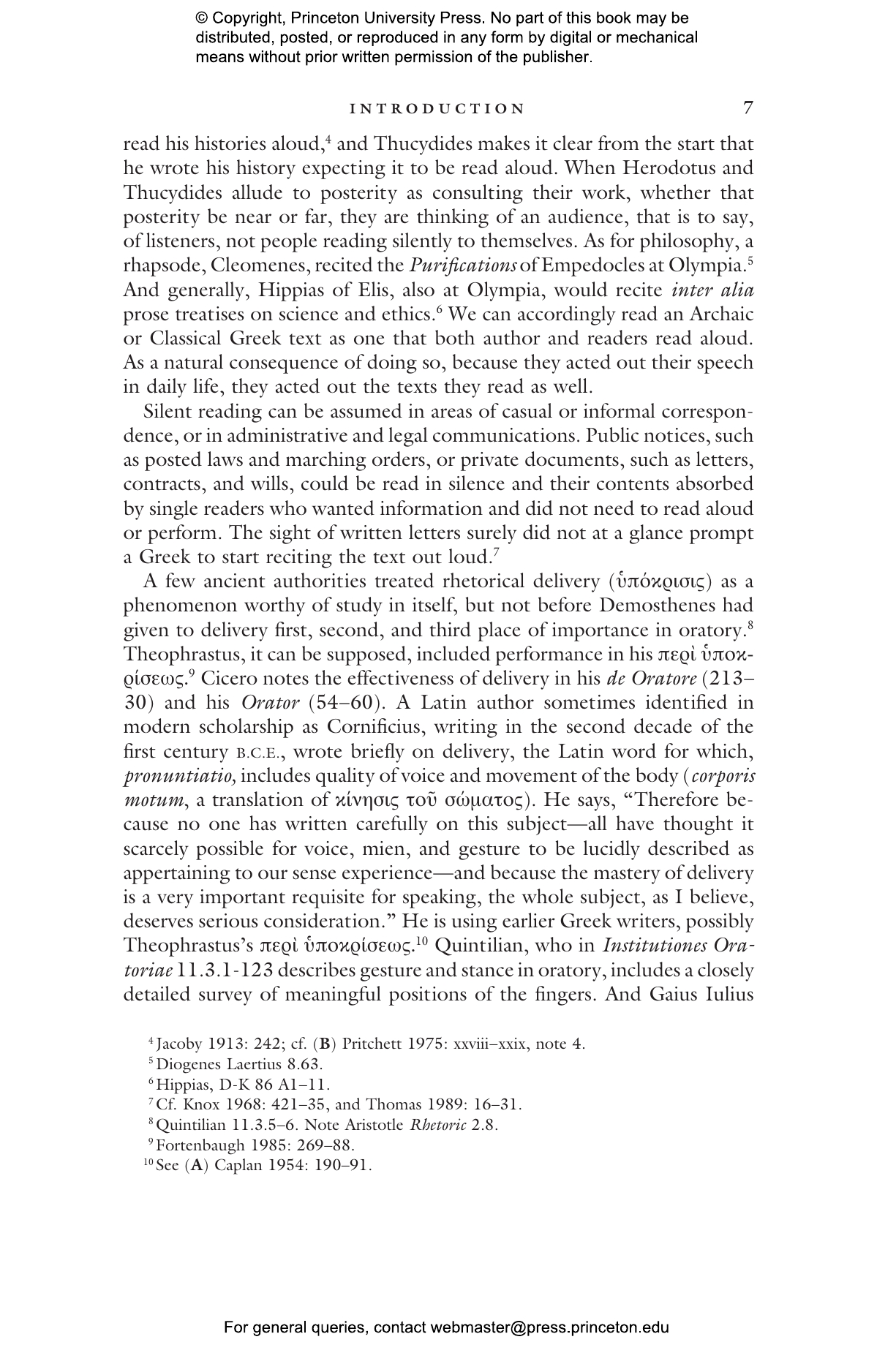 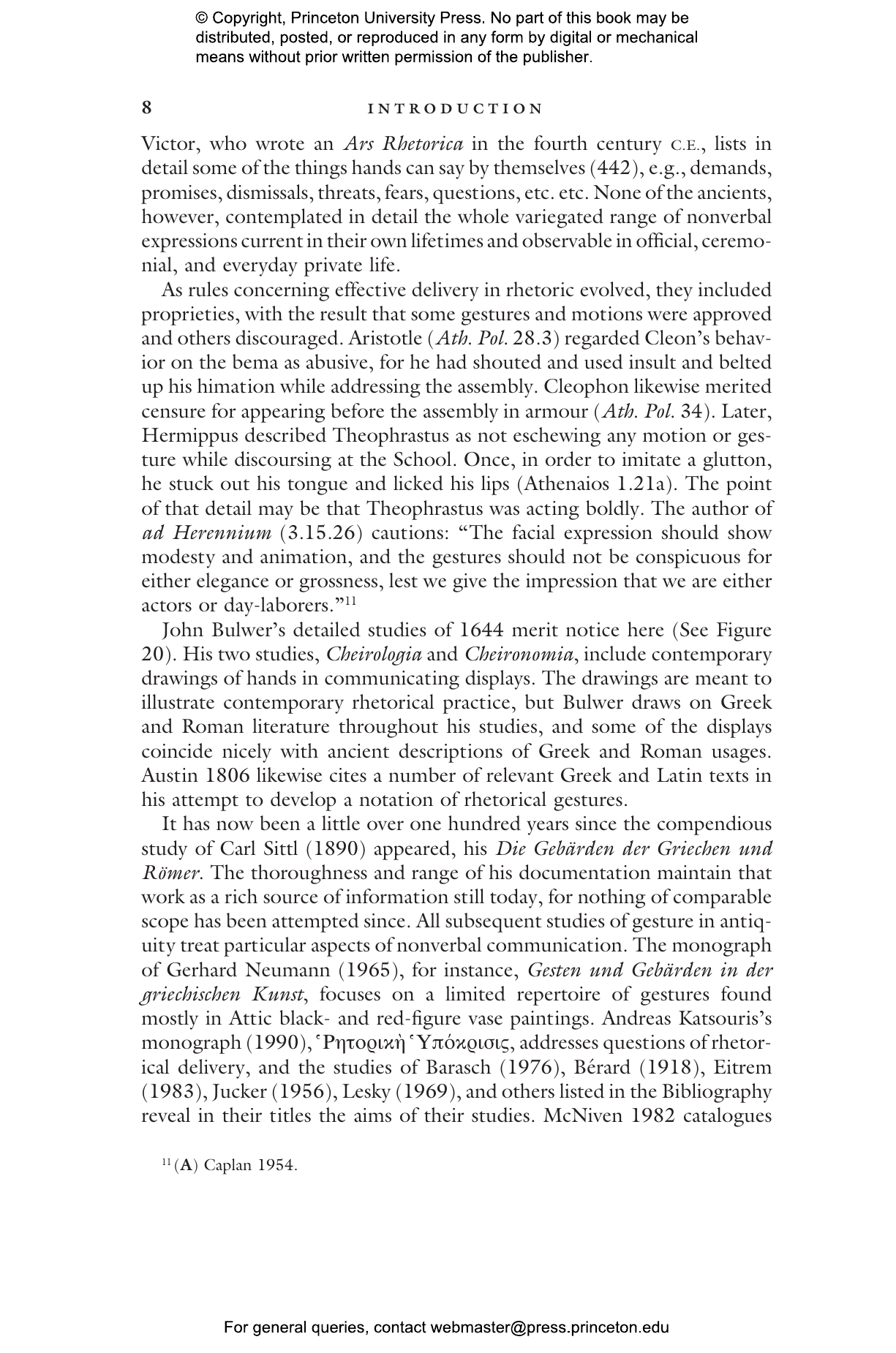 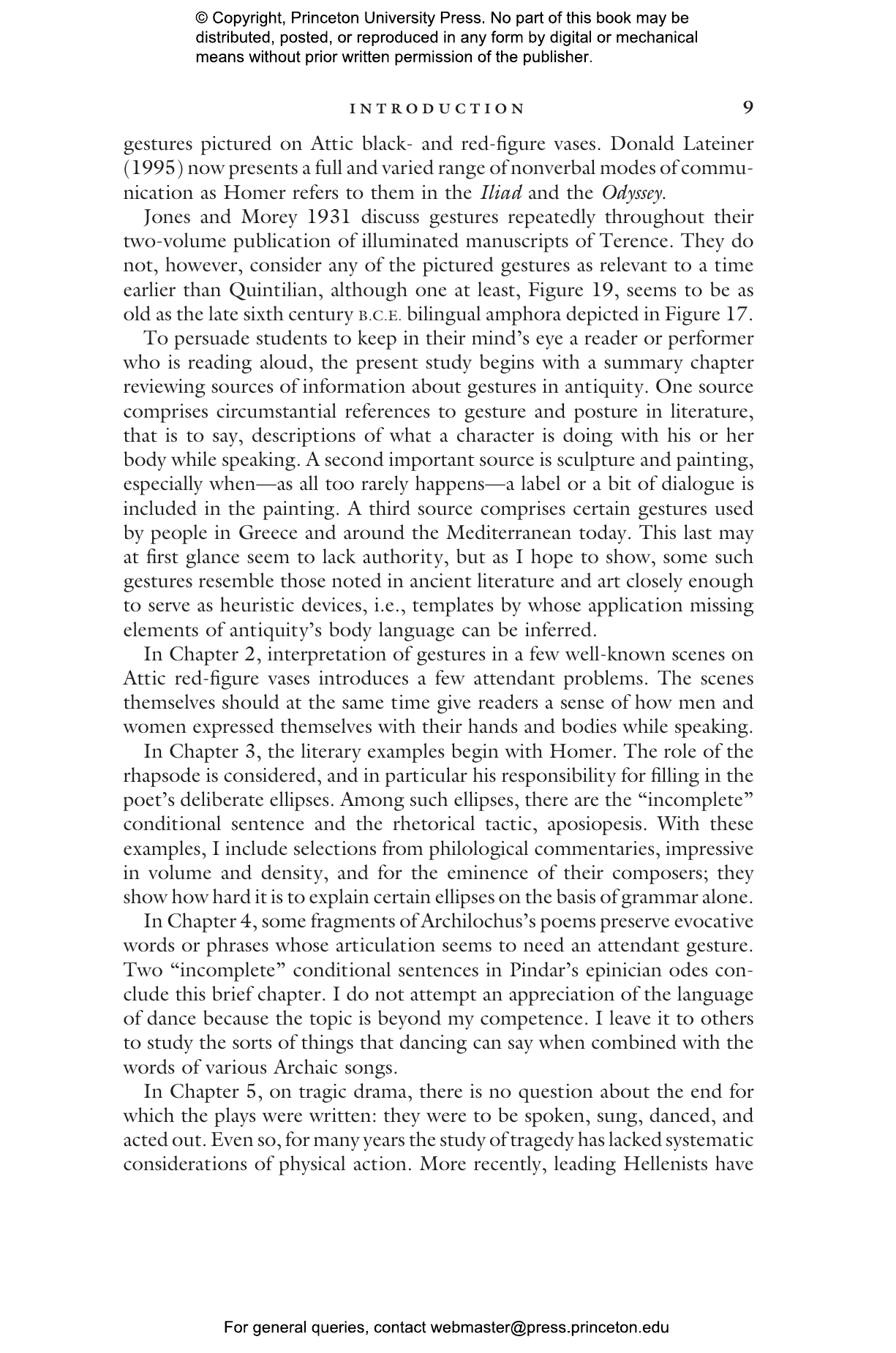 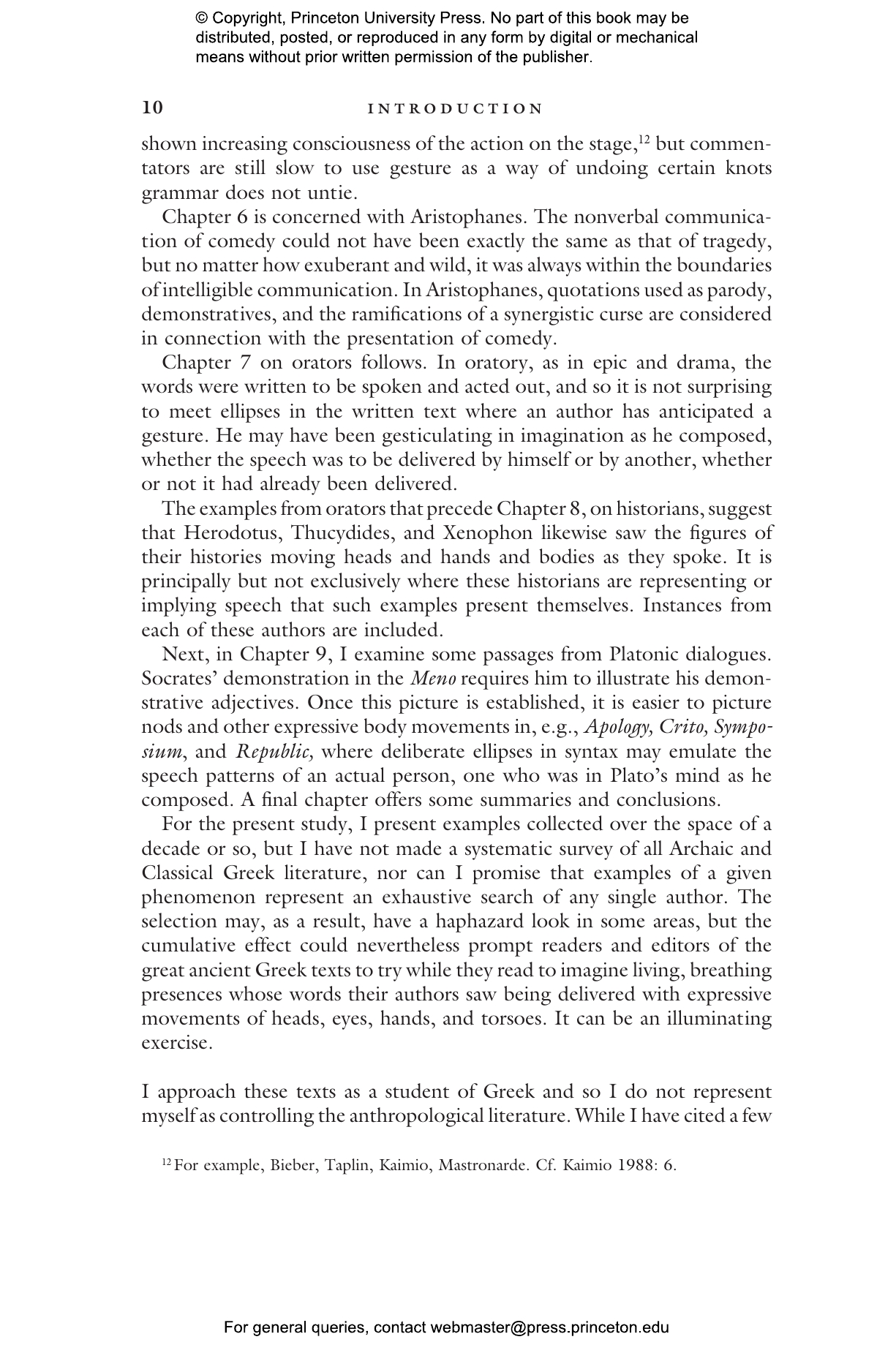 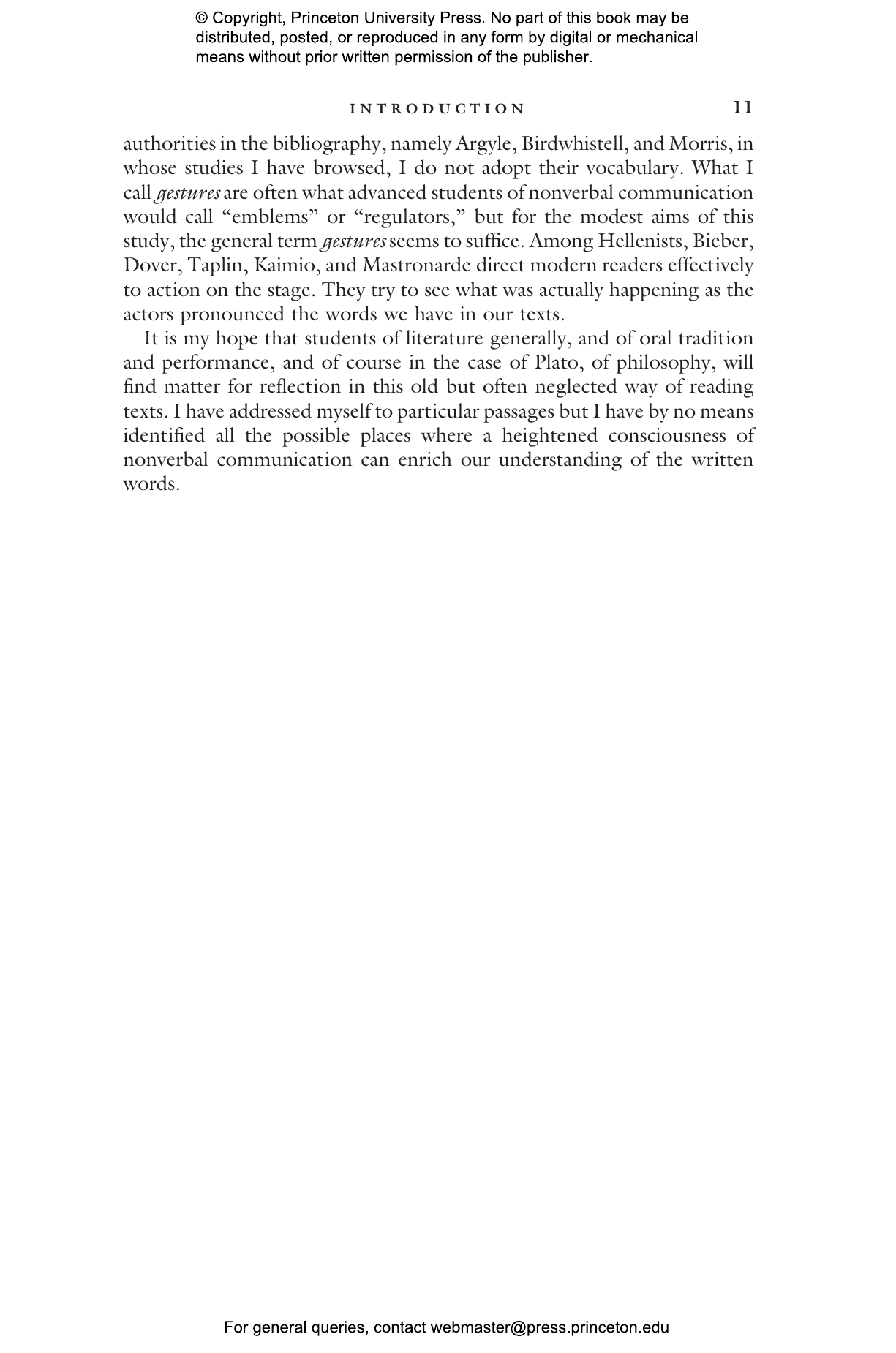 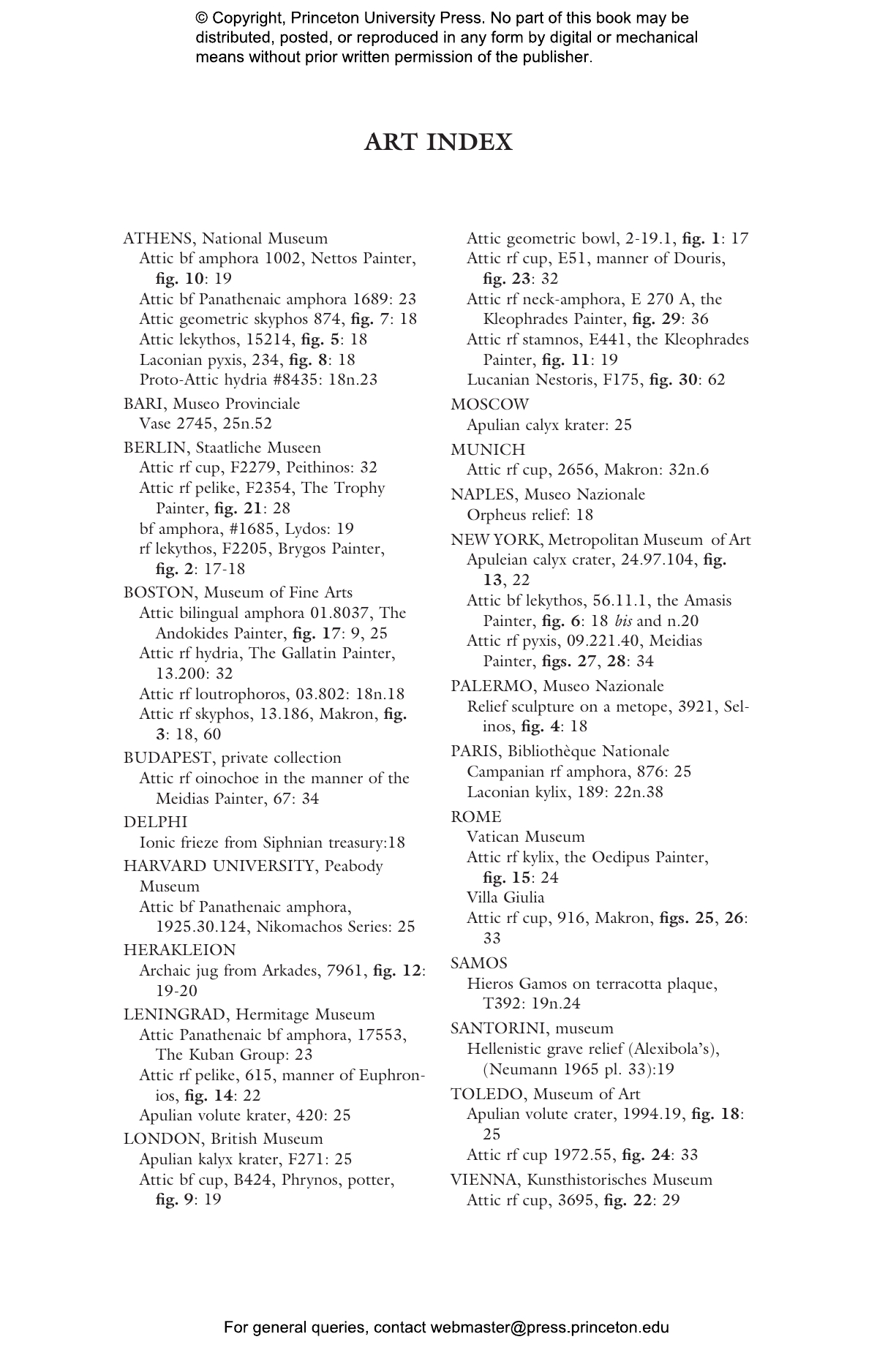 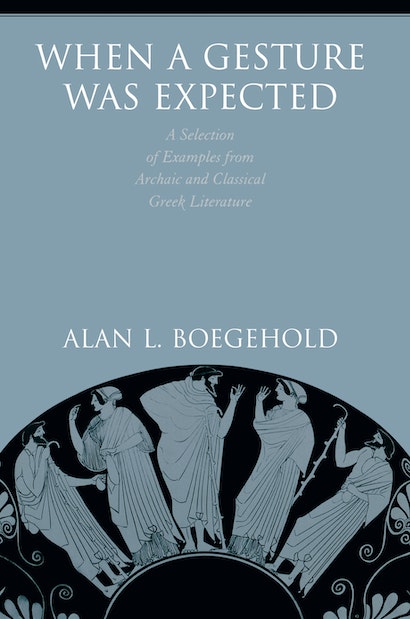 When a Gesture Was Expected encourages a deeper appreciation of ancient Greek poetry and prose by showing where a nod of the head or a wave of the hand can complete meaning in epic poetry and in tragedy, comedy, oratory, and in works of history and philosophy. All these works anticipated performing readers, and, as a result, they included prompts, places where a gesture could complete a sentence or amplify or comment on the written words. In this radical and highly accessible book, Alan Boegehold urges all readers to supplement the traditional avenues of classical philology with an awareness of the uses of nonverbal communication in Hellenic antiquity. This additional resource helps to explain some persistently confusing syntaxes and to make translations more accurate. It also imparts a living breath to these immortal texts.

Where part of a work appears to be missing, or the syntax is irregular, or the words seem contradictory or perverse—without evidence of copyists’ errors or physical damage—an ancient author may have been assuming that a performing reader would make the necessary clarifying gesture. Boegehold offers analyses of many such instances in selected passages ranging from Homer to Aeschylus to Plato. He also presents a review of sources of information about such gestures in antiquity as well as thirty illustrations, some documenting millennia-long continuities in nonverbal communication.

Alan L. Boegehold, Professor of Classics, teaches Latin and Greek at Brown University. Within recent years he has published Agora 28. The Lawcourts at Athens; Athenian Identity and Civic Ideology, with Adele Scafuro; and In Simple Clothes, translations into English of eleven poems by Constantine Cavafy.

"In this nearly organized, well written, and lucid study on non-verbal communication in Archaic and Classical Greek Literature, Professor Alan Boegehold offers interesting and helpful insights into the understanding of passages in both poetry and prose . . . ."—James J. Clauss, Bryn Mawr Classical Review

"There is much to praise in this book. It has an original and creative thesis that provides new insight into some old problems . . . Boegehold makes many perceptive and significant observations. . . . This study is an excellent model of how to tease out new meaning from familiar texts."—Gregory S. Aldrete, Classical World

"By focusing on gestures, facial expressions, and other nonverbal means of communication implied in Greek literature, Alan Boegehold gives the reader new tools with which to read long-famous works. He knows Greece, the Greek people, and Greek customs and popular culture, and draws on this data bank not only to reveal new meanings but also to show that some 'corrections' made by editors and commentators in the texts are unnecessary—sometimes even wrong. There is no other book like this in the field."—Mortimer Chambers, University of California, Los Angeles

"When a Gesture Was Expected conveys a huge amount of learning and fascinating material. Its central thesis, that the Greeks have always accompanied their speech with a wide range of gestures and that the ancients saw these gestures as an integral part of the speech act itself, is certainly correct and needs saying."—Carolyn Dewald, University of Southern California