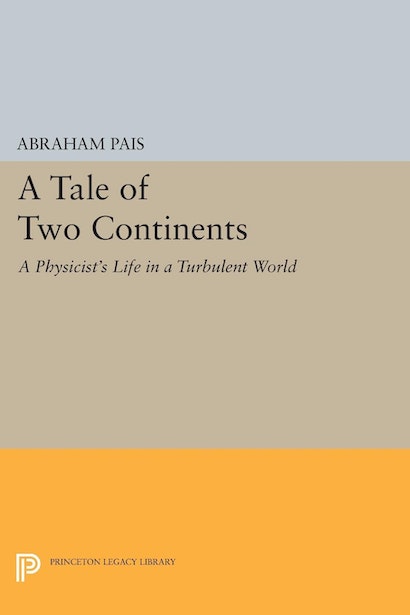 “People like myself, who truly feel at home in several countries, are not strictly at home anywhere,” writes Abraham Pais, one of the world’s leading theoretical physicists, near the beginning of this engrossing chronicle of his life on two continents. The author of an immensely popular biography of Einstein, Subtle Is the Lord, Pais writes engagingly for a general audience. His “tale” describes his period of hiding in Nazi-occupied Holland (he ended the war in a Gestapo prison) and his life in America, particularly at the newly organized Institute for Advanced Study in Princeton, then directed by the brilliant and controversial physicist Robert Oppenheimer. Pais tells fascinating stories about Oppenheimer, Einstein, Bohr, Sakharov, Dirac, Heisenberg, and von Neumann, as well as about nonscientists like Chaim Weizmann, George Kennan, Erwin Panofsky, and Pablo Casals. His enthusiasm about science and life in general pervades a book that is partly a memoir, partly a travel commentary, and partly a history of science.

Pais’s charming recollections of his years as a university student become somber with the German invasion of the Netherlands in 1940. He was presented with an unusual deadline for his graduate work: a German decree that July 14, 1941, would be the final date on which Dutch Jews could be granted a doctoral degree. Pais received the degree, only to be forced into hiding from the Nazis in 1943, practically next door to Anne Frank. After the war, he went to the Institute of Theoretical Physics in Copenhagen to work with Niels Bohr. 1946 began his years at the Institute for Advanced Study, where he worked first as a Fellow and then as a Professor until his move to Rockefeller University in 1963. Combining his understanding of disparate social and political worlds, Pais comments just as insightfully on Oppenheimer’s ordeals during the McCarthy era as he does on his own and his European colleagues’ struggles during World War II.

"The author of a highly regarded biography of Albert Einstein sums up his own life. . . chronicle[s] his passage through momentous times, describing his experiences as a privileged onlooker. . . . Authoritative and valuable historically."—Kirkus Review

"Mr. Pais was not just an internationally acclaimed physicist; he was also a Jewish survivor of the Nazi occupation of the Netherlands. . . . [He] includes some lively and evocative sketches of the famous people he knew over the decades. . . . [H]is book has many gripping, informative and charming passages, . . . a valuable addition to our store of 20th-century lives."—Richard Bernstein, The New York Times

"Abraham Pais is the Samuel Pepys of 20th-century physics. . . . Until now, Pais concentrated on other scientists' work. In A Tale of Two Continents, however, he tells us about his own extraordinary life in the charming, rather formal style that has become his hallmark. Autobiography is an unrivaled way of telling the truth about other people and Pais takes full advantage of this, drawing well-observed portraits of some of his most illustrious acquaintances, including 50 Nobel laureates (yes, he has counted). . . . Pais seems to have met just about everyone important in shaping modern physics. He draws finely observed vignettes of a host of superstars. . . ."—Graham Farmelo, New Scientist

"Written in a straightforward, unpretentious, literate manner, A Tale of Two Continents is an engrossing and gripping document."—Silvan S. Schweber, Physics Today

"Pais renders observation and judgment from the world-view of a person of deeply engaged passion, and of one outwardly removed in critical reflection. Ranging between warmly playful and acerbic, exceptional events of this century appear in fascinating, multi-faceted substance. I love it!"—Mitchell J. Feigenbaum, professor, Rockefeller University