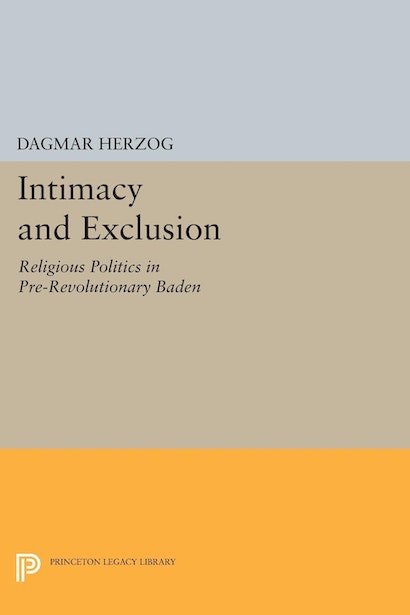 During the years leading up to the revolutions of 1848, liberal and conservative Germans engaged in a contest over the terms of the Enlightenment legacy and the meaning of Christianity — a contest that grew most intense in the Grand Duchy of Baden, where liberalism first became an influential political movement. Bringing insights drawn from Jewish and women’s studies into German history, Dagmar Herzog demonstrates how centrally Christianity’s problematic relationships to Judaism and to sexuality shaped liberal, conservative, and radical thought in the pre-revolutionary years. In particular, she reveals how often conflicts over the “politics of the personal,” especially over sex and marriage, determined “larger” political matters, among them the relationship between church and state and the terms on which Jews were granted civic rights.

Herzog documents the rise of a politically sophisticated conservative Catholicism, and explores liberals’ ensuing eagerness to advance a humanist version of Christianity. Yet she also examines the limitations at the heart of the liberal project, especially liberals’ unwillingness to grant equality to those deemed “different” from the Christian male norm. Finally, the author analyzes the difficulties encountered by philosemitic and feminist radicals in reconceptualizing both classical liberalism and Christianity in order to make room for the claims of Jews and women.

"Dagmar Herzog has written a fascinating first book that provides an excellent example of successful use by a historian of methods of textual analysis developed by literary scholars."—American Historical Review