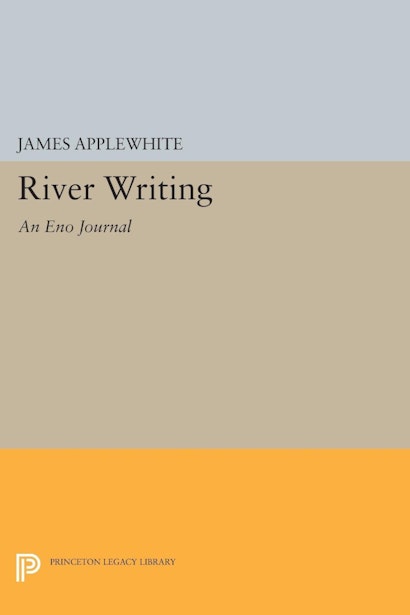 “These poems are the waves emanating from the gravitational fall of my runs by the Eno river,” writes James Applewhite, “and other travels, into a self I could not otherwise know. They are my repetitive song of belief in the possibility of presence in language.”

From “Observing the Sun”:

On a bank overlooking the Eno,
I feel us as lightly aligned
As heads of the Queen Anne’s lace,
Their congregation of angles.
Red sun, dilated, has us all
In its sights.
Against its horizon,
I spread my arms like a road sign
To mark earth where we are.

"River Writing is an extraordinary journal of a poet's intimate encounter with a landscape in which the self can temporarily abandon itself. In this setting, nature becomes a text, a language of past, present and future. Applewhite reads that text for us with enormous empathy and by ideal light."—Lisel Mueller

"James Applewhite's River Writing: An Eno Journal seems to me one of the few authentic and strong American poetic sequences of his generation. Applewhite has found his true subject as a poet, and has developed a stance and style wholly adequate to the philosophical and spiritual reach of his poignant concerns."—Harold Bloom