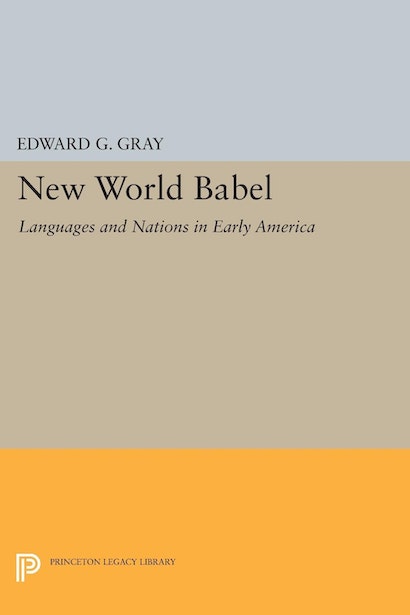 New World Babel is an innovative cultural and intellectual history of the languages spoken by the native peoples of North America from the earliest era of European conquest through the beginning of the nineteenth century. By focusing on different aspects of the Euro-American response to indigenous speech, Edward Gray illuminates the ways in which Europeans’ changing understanding of “language” shaped their relations with Native Americans. The work also brings to light something no other historian has treated in any sustained fashion: early America was a place of enormous linguistic diversity, with acute social and cultural problems associated with multilingualism.

Beginning with the sixteenth and seventeenth centuries, and using rarely seen first-hand accounts of colonial missionaries and administrators, the author shows that European explorers and colonists generally regarded American-Indian languages, like all languages, as a divine endowment that bore only a superficial relationship to the distinct cultures of speakers. By relating these accounts to thinkers like Locke, Adam Smith, Jefferson, and others who sought to incorporate their findings into a broader picture of human development, he demonstrates how, during the eighteenth century, this perception gave way to the notion that language was a human innovation, and, as such, reflected the apparent social and intellectual differences of the world’s peoples.

The book is divided into six chronological chapters, each focusing on different aspects of the Euro-American response to indigenous languages. New World Babel will fascinate historians, anthropologists, and linguists — anyone interested in the history of literacy, print culture, and early ethnological thought.

"Gray [covers] a vast range of very diverse material, much of it unknown and unread by modern scholars."—Anthony Pagden, The Johns Hopkins University

"A substantial contribution to American intellectual history and to our understanding of how white presumptions shaped the attitudes toward Indian language and culture."—Kenneth Cmiel, University of Iowa