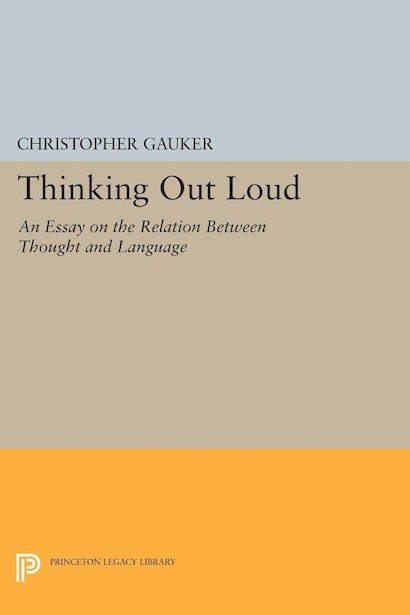 Most contemporary philosophers, psychologists, and linguists think of language as basically a means by which speakers reveal their thoughts to others. Christopher Gauker calls this “the Lockean theory of language,” since Locke was one of its early exponents, and he contends that it is fundamentally mistaken. The Lockean theory, he argues, cannot adequately explain the nature of the general concepts that words are supposed to express. In developing this theme, Gauker investigates a wide range of topics, including Locke’s own views, contemporary theories of conceptual development, the nature of reference and logical validity, the nature of psychological explanation, and the division of epistemic labor in society.

The Lockean theory contrasts with the conception of language as the medium of a distinctive kind of thinking. Gauker explains how language, so conceived, is possible as a means of cooperative interaction. He articulates the possibility and objectivity of a kind of non-conceptual thinking about similarities and causal relations, which allows him to explain how a simple language might be learned. He then takes on the problem of logical structure and gives a formally precise account of logical validity formulated in terms of “assertibility in a context” rather than in terms of truth. Finally, he describes the role that attributions of belief and meaning play in facilitating cooperative interaction. With lucid and persuasive arguments, his book challenges philosophers, psychologists, linguists, and logicians to rethink their fundamental assumptions about the nature of language.

"Christopher Gauker's aim in this ambitious and challenging book is ... to discredit the pervasive 'Lockean theory of communication'... [and] to defend his own view according to which 'spoken languages are the very medium of our most sophisticated thinking'.... [M]uch ... in this valuable book... deserves comment and praise."—Philosophical Quarterly

"Anyone interested in what is called 'cognitive science' should read this book. [It] is an original, ambitious, and comprehensive work."—Lynne Rudder Baker, University of Massachusetts at Amherst