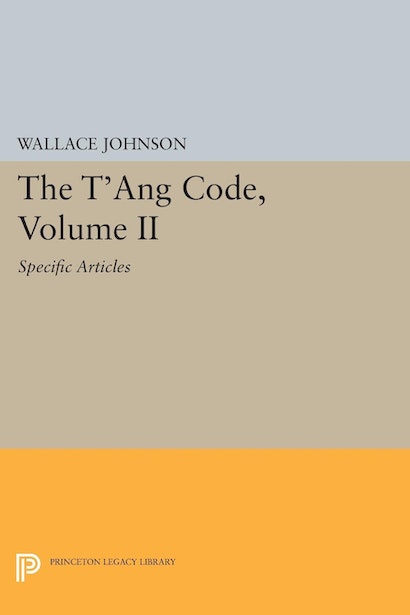 This is the second and final volume of the annotated translation of a seminal Chinese legal text. The T’ang Code, written in 653 A.D., is the most important legal text in East Asian history. Not only is it China’s earliest law code to survive in its entirety, influencing all subsequent Chinese law, but it has also served as a model for codes of law in other East Asian countries, including Japan, Korea, and Vietnam. This is the only translation of the T’ang code into a Western language.

The first volume of the Code, published in translation in 1979, specifies the basic principles of T’ang law and explains the structural standards for applying these principles. Volume II describes acts that are punishable by law and enumerates their punishments. For contemporary readers, the T’ang Code is more than simply a legal document. Studying the 445 “specific articles” sheds considerable light on Chinese culture. The portrait that emerges has surprising resonances in present-day Chinese society — its emphasis on the preservation of the family and the interrelatedness of authority and responsibility, for example. As Western relations with the countries of East Asia continue to expand today, it is increasingly important that we understand the complexities of a legal system that has evolved over more than fifteen centuries. The availability of the complete T’ang Code in English is a significant contribution to this understanding.

"The translation is remarkably faithful and the translator demonstrates a high degree of familiarity with Western legal terminology. In addition, he has made the applaudable effort to provide copious annotation and crossreferences. . . . Johnson's definitive translation will benefit students of Chinese culture for years to come."—Early Medieval China

"[The T'ang Code, the earliest Chinese code to survive in complete form, has been compared, as a source of legal norms for a whole civilization, with the Institutes of Justinian in the West. T'ang codified law became the model for the legal systems of Japan, Korea, and Vietnam, as well as for all later Chinese law codes: Some of its provisions remained embedded in the Ch'ing legal code still in use at the beginning of the twentieth century. It represented a major stage both in the standardization and rationalization of legal thought and legal vocabulary, and also in the definition and refinement of the broad principles of law.] Wallace Johnson's magisterial integral translation makes this fundamental legal source available to western readers for the first time, in a meticulously accurate and consistent translation."—Denis Twitchett, Princeton University

"[The T'ang dynasty juridical code of A.D. 653 is China's earliest law code to survive intact. It is also the most influential legal corpus ever to have been promulgated in East Asia. Chronologically, it has profoundly influence all subsequent law codes in imperial China. Indeed, its influence is still felt today in certain institutions and social attitudes present in the People's Republic of China. Geographically, it has also strongly affected the laws and mores of neighboring Korea, Japan, and Vietnam.] The monumental task of meticulously translating all of the articles of the T'ang Code into English has now reached a happy conclusion with the present volume. The result should be of compelling interest not only to China specialists but also to cross-culturalists in such fields as jurisprudence, philosophy, sociology, anthropology, and political science."—Derk Bodde, University of Pennsylvania