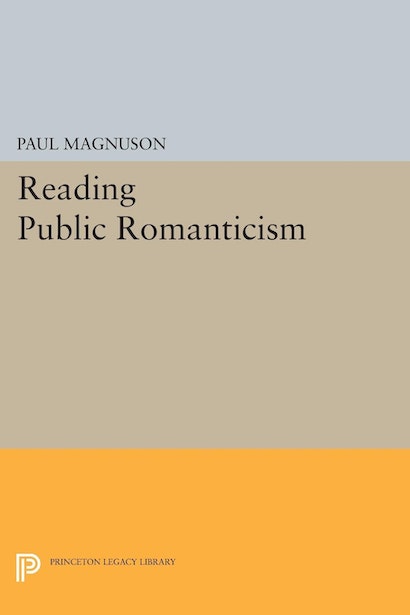 Reading Public Romanticism is a significant new example of the linking of esthetics and historical criticism. Here Paul Magnuson locates Romantic poetry within a public discourse that combines politics and esthetics, nationalism and domesticity, sexuality and morality, law and legitimacy. Building on his well-regarded previous work, Magnuson practices a methodology of close historical reading by identifying precise versions of poems, reading their rhetoric of allusion and quotation in the contexts of their original publication, and describing their public genres, such as the letter. He studies the author’s public signature or motto, the forms and significance of address used in poems, and the resonances of poetic language and tropes in the public debates.

According to Magnuson, “reading locations” means reading the writing that surrounds a poem, the “paratext” or “frame” of the esthetic boundary. In their particular locations in the public discourse, romantic poems are illocutionary speech acts that take a stand on public issues and legitimate their authors both as public characters and as writers. He traces the public significance of canonical poems commonly considered as lyrics with little explicit social or political commentary, including Wordsworth’s “Immortality Ode”; Coleridge’s “This Lime-Tree Bower My Prison,” “Frost at Midnight,” and “The Ancient Mariner”; and Keats’s “On a Grecian Urn.” He also positions Byron’s Dedication to Don Juan in the debates over Southey’s laureateship and claims for poetic authority and legitimacy. Reading Public Romanticism is a thoughtful and revealing work.