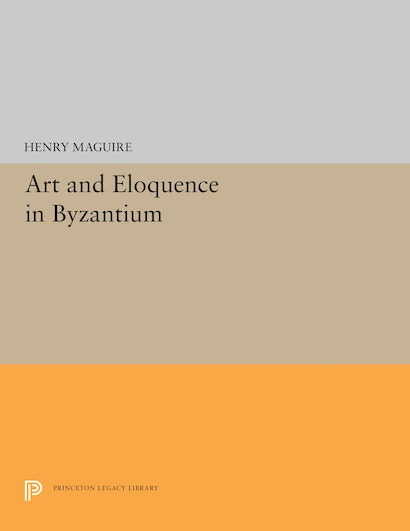 In this interdisciplinary study, Henry Maguire examines the influence of several literary genres and rhetorical techniques on the art of narration in Byzantium. He reveals the important and wide-reaching influence of literature on the visual arts. In particular, he shows that the literary embellishments of the sermons and hymns of the church nourished the imaginations of artists, and fundamentally affected the iconography, style, and arrangement of their work. Using provocative material previously unfamiliar to art historians, he concentrates on religious art from A.D. 843 to 1453.
Professor Maguire first considers the Byzantine view of the link between oratory and painting, and then the nature of rhetoric and its relationship to Christian literature. He demonstrates how four rhetorical genres and devices—description, antithesis, hyperbole, and lament—had a special affinity with the visual arts and influenced several scenes in the Byzantine art, including the Annunciation, the Nativity, the Massacre of the Innocents, the Presentation, Christ’s Passion, and the Dormition of the Virgin.
Through the literature of the church, Professor Maguire concludes, the methods of rhetoric indirectly helped Byzantine artists add vividness to their narratives, structure their compositions, and enrich their work with languages. Once translated into visual language, the artifices of rhetoric could be appreciated by many.
Henry Maguire is Assistant Professor of Art History at the University of Illinois at Urbana-Champaign.