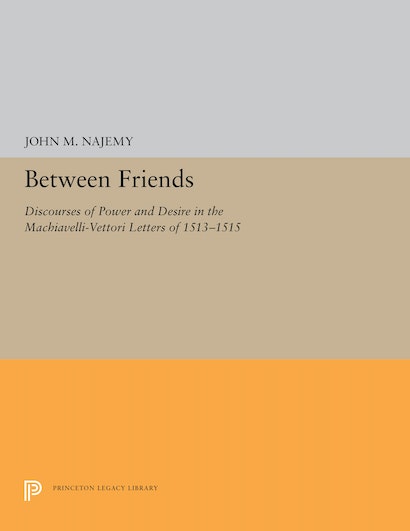 Between Friends offers the first extended close reading of the most famous epistolary dialogue of the Renaissance, the letters exchanged from 1513 to 1515 by Niccolo Machiavelli and Francesco Vettori. John Najemy reveals the literary richness and theoretical tensions of the correspondence, the crucial importance of the dialogue with Vettori in Machiavelli’s emergence as a writer and political theorist, and the close but complex relationship between the letters and Machiavelli’s major works on politics. Unlike previous and mostly fragmentary treatments of the correspondence, this book reads the letters as a continuously developing, collaborative text in which problems of language and interpretation gradually emerge as the critical issues.
Najemy argues that Vettori’s skeptical reaction to Machiavelli’s first letters on politics and provoked Machiavelli into a defense of language’s power to represent the world, a notion that soon become the underlying assumption of The Prince. Later, and largely through an apparently whimsical exchange of letters on love and the foibles of eros, Vettori led Machiavelli to confront the power of desire in language, which opened the way for a different, essentially poetic, approach to writing about politics that surfaces for the first time in the pages of the Discourses on Livy.
John M. Najemy is Professor of History at Cornell University. He is the author of Corporatism and Consensus in Florentine Electoral Politics, 1280-1400 (North Carolina).