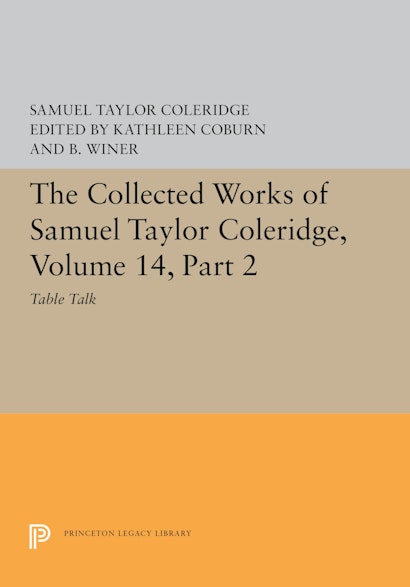 Volume 2 of 2. Coleridge’s nephew, son-in-law, and first editor, Henry Nelson Coleridge, began at the end of 1822 a record of Coleridge’s remarks as a way of preparing an anthology of the interests and thought of the great poet and critic. His manuscripts, gathered to form the major text of his new edition, include passages on relatives, friends, and various censorable topics omitted from the Table Talk of 1835 and unpublished until now. These two volumes also contain talk recorded by other listeners from 1798 until Coleridge’s death in 1834. Some of these records have not been previously published; some are published from manuscripts that differ from versions previously known. Also included are previously unpublished remarks by Wordsworth. Along with a bibliography of earlier editions of Table Talk and other useful appendixes, Carl Woodring’s edition reprints the second edition (1836), which differs from the manuscripts more extensively than the edition of 1835.
THis is the first fully annotated edition of a work that long remained more popular in the United Kingdom than any of the works in prose published by Coleridge himself. The two volumes make a convenient encyclopedia of his ideas and interests.
Carl Woodring is George Edward Woodberry Professor of Literature Emeritus at Columbia University.