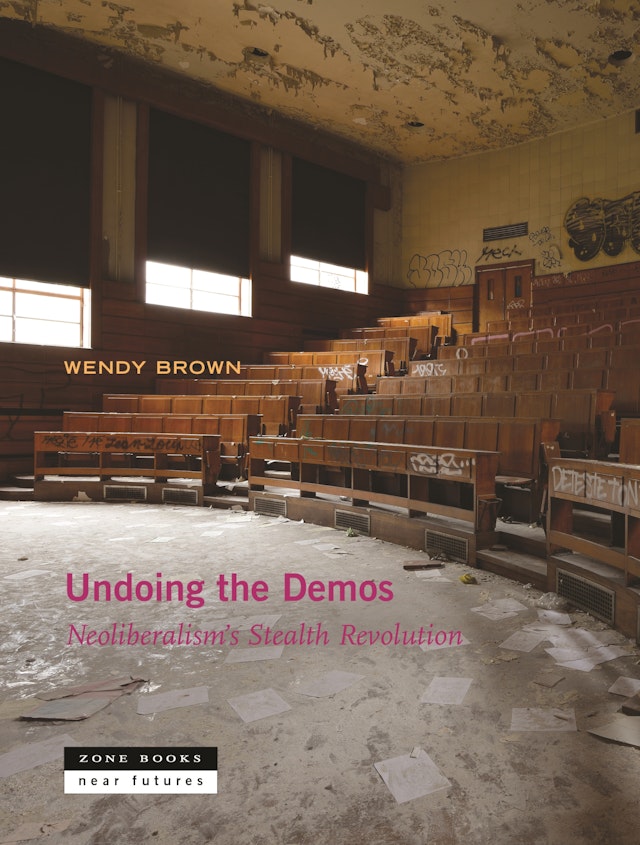 Neoliberal rationality — ubiquitous today in statecraft and the workplace, in jurisprudence, education, and culture — remakes everything and everyone in the image of homo oeconomicus. What happens when this rationality transposes the constituent elements of democracy into an economic register? In vivid detail, Wendy Brown explains how democracy itself is imperiled.

The demos disintegrates into bits of human capital; concerns with justice cede to the mandates of growth rates, credit ratings, and investment climates; liberty submits to the imperative of human capital appreciation; equality dissolves into market competition; and popular sovereignty grows incoherent. Liberal democratic practices may not survive these transformations. Radical democratic dreams may not either.

In an original and compelling theoretical argument, Brown explains how and why neoliberal reason undoes the political form and political imaginary it falsely promises to secure and reinvigorate. Through meticulous analyses of neoliberalized law, political practices, governance, and education, she charts the new common sense.

Undoing the Demos makes clear that, far from being the lodestar of the twenty-first century, a future for democracy depends upon it becoming an object of struggle and rethinking.

“A trenchant critique of the piecemeal neoliberal destruction of democratic politics by one of the most powerful political theorists of our time. Undoing the Demos is a much-needed, passionate defense of political autonomy.” — Rainer Forst, Frankfurt University

“With this passionately incisive critique of neoliberal (ir)rationality, Wendy Brown delineates the political stakes of the present. Tracing its antipolitical and antidemocratic impulses, she challenges us to defend and extend the possibilities of a popular politics that makes the promises of democracy come true.” — John Clarke, Professor Emeritus of Social Policy, The Open University

“This is a book for the age of resistance, for the occupiers of the squares, for the generation of Occupy Wall Street. The premier radical political philosopher of our time offers a devastating critique of the way neoliberalism has hollowed out democracy. After reading Brown, only bad faith can justify the toleration of neoliberalism.” — Costas Douzinas, Director of the Birkbeck Institute for the Humanities and author of Philosophy and Resistance in the Crisis

“Wendy Brown vividly lays bare neoliberalism’s perverse rationality, the ‘economization of everything,’ documenting its corrosive consequences for public institutions, for solidaristic values, and for democracy itself. Essential but unsettling reading, Undoing the Demos is analytically acute and deeply disturbing.” — Jamie Peck, author of Constructions of Neoliberal Reason

“A major contribution, presenting its arguments with power and clarity, this book helps us understand the world we have increasingly been forced to live in, and to begin the process of thinking about what might be done to revitalize our political imagination and practices.” — Raymond Geuss, author of Reality and Its Dreams