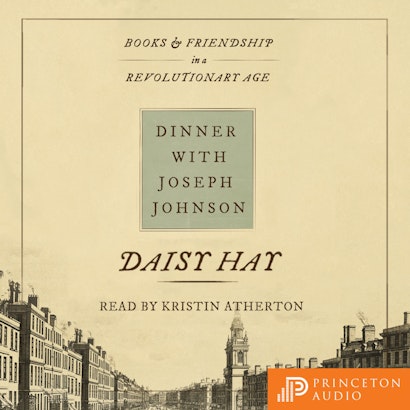 Once a week, in late eighteenth-century London, writers of contrasting politics and personalities gathered around a dining table. The veal and boiled vegetables may have been unappetising but the company was convivial and the conversation brilliant and unpredictable. The host was Joseph Johnson, publisher and bookseller: a man at the heart of literary life. In this book, Daisy Hay paints a remarkable portrait of a revolutionary age through the connected stories of the men and women who wrote it into being, and whose ideas still influence us today.

Johnson’s years as a publisher, 1760 to 1809, witnessed profound political, social, cultural and religious changes—from the American and French revolutions to birth of the Romantic age—and many of his dinner guests and authors were at the center of events. The shifting constellation of extraordinary people at Johnson’s table included William Blake, William Wordsworth, Samuel Taylor Coleridge, Benjamin Franklin, the scientist Joseph Priestly and the Swiss artist Henry Fuseli, as well as a group of extraordinary women—Mary Wollstonecraft, the novelist Maria Edgeworth, and the poet Anna Barbauld. These figures pioneered revolutions in science and medicine, proclaimed the rights of women and children and charted the evolution of Britain’s relationship with America and Europe. As external forces conspired to silence their voices, Johnson made them heard by continuing to publish them, just as his table gave them refuge.

A rich work of biography and cultural history, Dinner with Joseph Johnson is an entertaining and enlightening story of a group of people who left an indelible mark on the modern age.

Daisy Hay is an award-winning biographer whose previous books include Young Romantics: The Shelleys, Byron and Other Tangled Lives and Mr. and Mrs. Disraeli: A Strange Romance. She is associate professor of English literature and life writing at the University of Exeter.

"[An] illuminating account. . . . Hay’s is a fascinating take on the intellectual and political development of the time. Fans of literary history will relish this opportunity to pull up a seat at Johnson’s table."—Publishers Weekly

"Dinner with Joseph Johnson evokes the noise and excitement of an age characterized by the unceasing hum of literary debate. . . . A fitting reflection of the period that Hay describes: a time when the written word could make someone’s name—or cost them their liberty."—Francesca Peacock, Financial Times

"Hay's meticulously researched biography, rich in period and personal detail, sheds light on both Johnson the man and the vibrant cultural world he inhabited."—Hannah Beckerman, The Guardian

"Hay makes the most of a vivid period in English and especially London history. Her carefully poised study puts Johnson, today an obscure figure, back at the center of his circle."—Rosemary Hill, London Review of Books

"Dinner with Joseph Johnson is a portrait of literary ferment. . . . [It] reminds us of the excitement of a period in which inherited orthodoxies were forensically scrutinised and found lacking. And it offers us pause for thought."—Matthew Dennison, The Telegraph

"As a bookseller, Johnson’s lists ranged widely, covering topics such as cookery, gardening, education and theology alongside the bread-and-butter of politics and poetry. Hay’s book follows Johnson’s lead. The result is equal parts panoramic and kaleidoscopic, marching along some of the less-trod paths of the Romantic era."—Joseph Hone, History Today

"Dinner with Joseph Johnson is a beautifully packaged, skillfully written and detailed book that finally gives this gentle revolutionary the recognition he deserves."—Jacqueline Riding, Country Life

“We usually think of the Romantic revolution in terms of its writers, from Blake, Wordsworth and Coleridge in poetry to Mary Wollstonecraft and William Godwin in politics. But writers need publishers and booksellers. In this regard, Joseph Johnson was the man who made the revolution possible. Daisy Hay has had the inspired idea of reading Romanticism through the prism of the ‘three o’clock dinners’ where he brought the literary world together. The result is truly a biography of the spirit of the age.”—Jonathan Bate, author of Radical Wordsworth