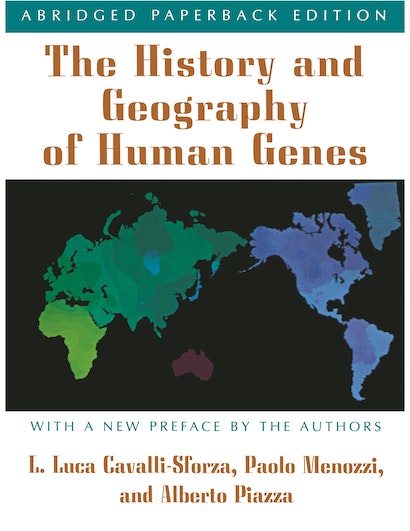 Hailed as a breakthrough in the understanding of human evolution, The History and Geography of Human Genes offers the first full-scale reconstruction of where human populations originated and the paths by which they spread throughout the world. By mapping the worldwide geographic distribution of genes for over 110 traits in over 1800 primarily aboriginal populations, the authors charted migrations and devised a clock by which to date evolutionary history. This monumental work is now available in a more affordable paperback edition without the myriad illustrations and maps, but containing the full text and partial appendices of the authors’ pathbreaking endeavor.

"This is the most comprehensive treatment of human genetic variations available.... It will likely play an important role in future research in anthropological genetics.... An impressive display of synthesis and analysis."—Science

"This is the most comprehensive treatment of human genetic variations available. . . . An impressive display of synthesis and analysis."—Science

"This long-awaited magnum opus is a major contribution to our knowledge of human genetic variation and its distribution on a global scale."—American Scientist

"A landmark in biology. There is nothing of its kind. . . . It represents an essential historical source for all human biologists, guaranteeing its importance in evolutionary biology."—American Journal of Human Genetics

"A magisterial survey of what is known about the distribution of human genes. . . . This book is a milestone in the pursuit of human evolutionary history."—New Scientist

"A landmark in the study of human evolution."—Trends in Genetics

"A crowning achievement, a compendium of a career's work, and a sourcebook for years to come. . . . a landmark publication, a standard by which work in this field must be judged in the future."—American Journal of Human Biology