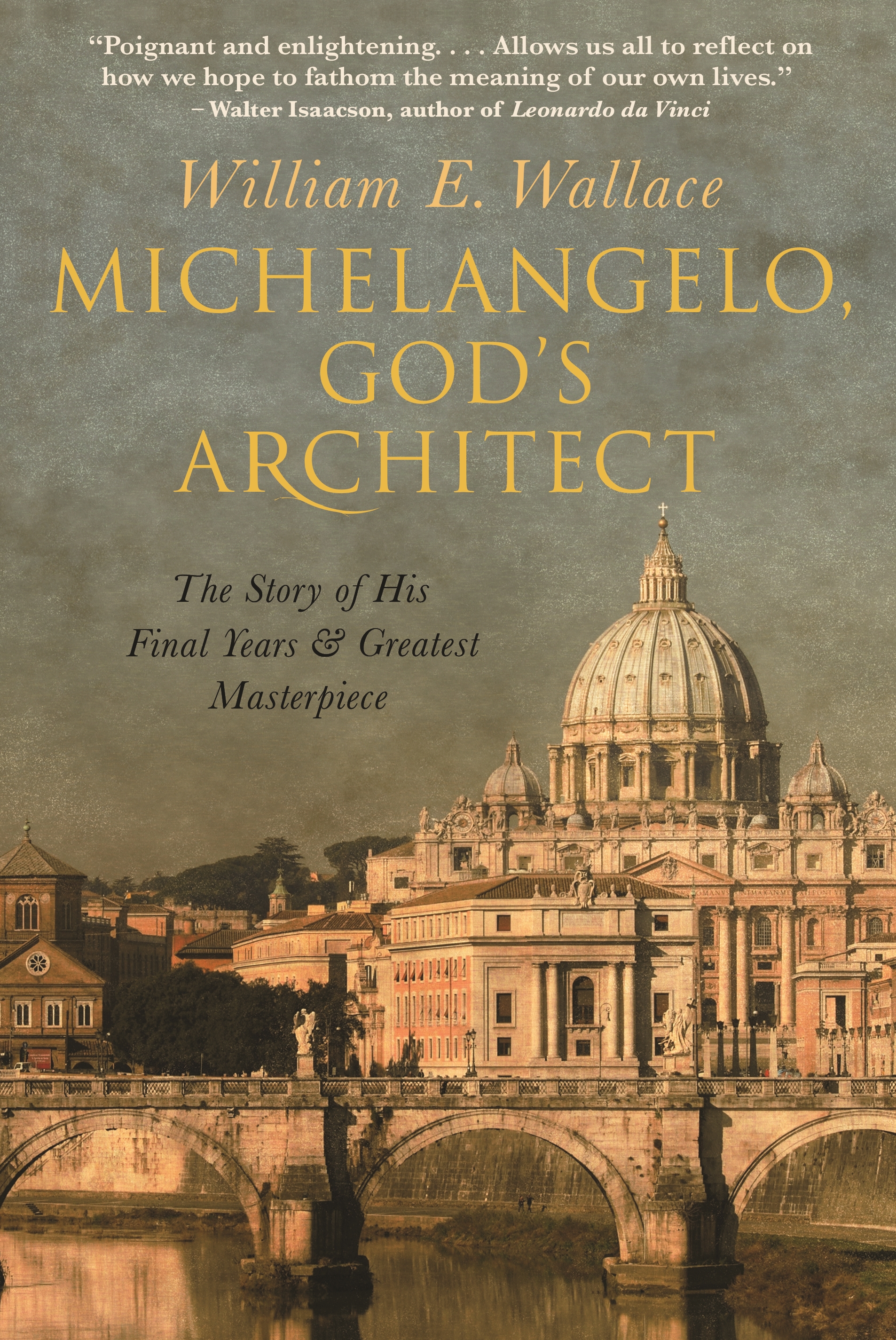 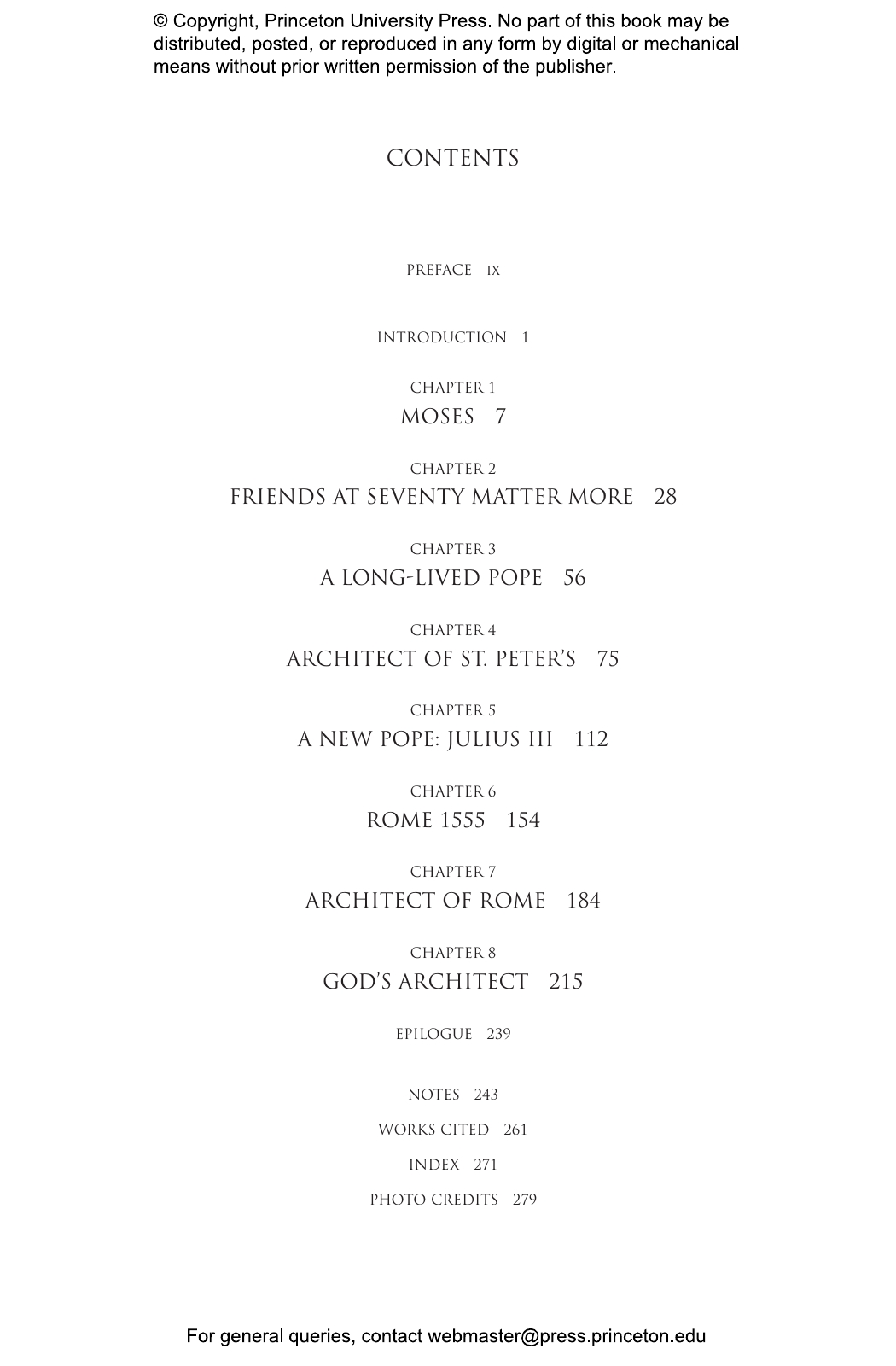 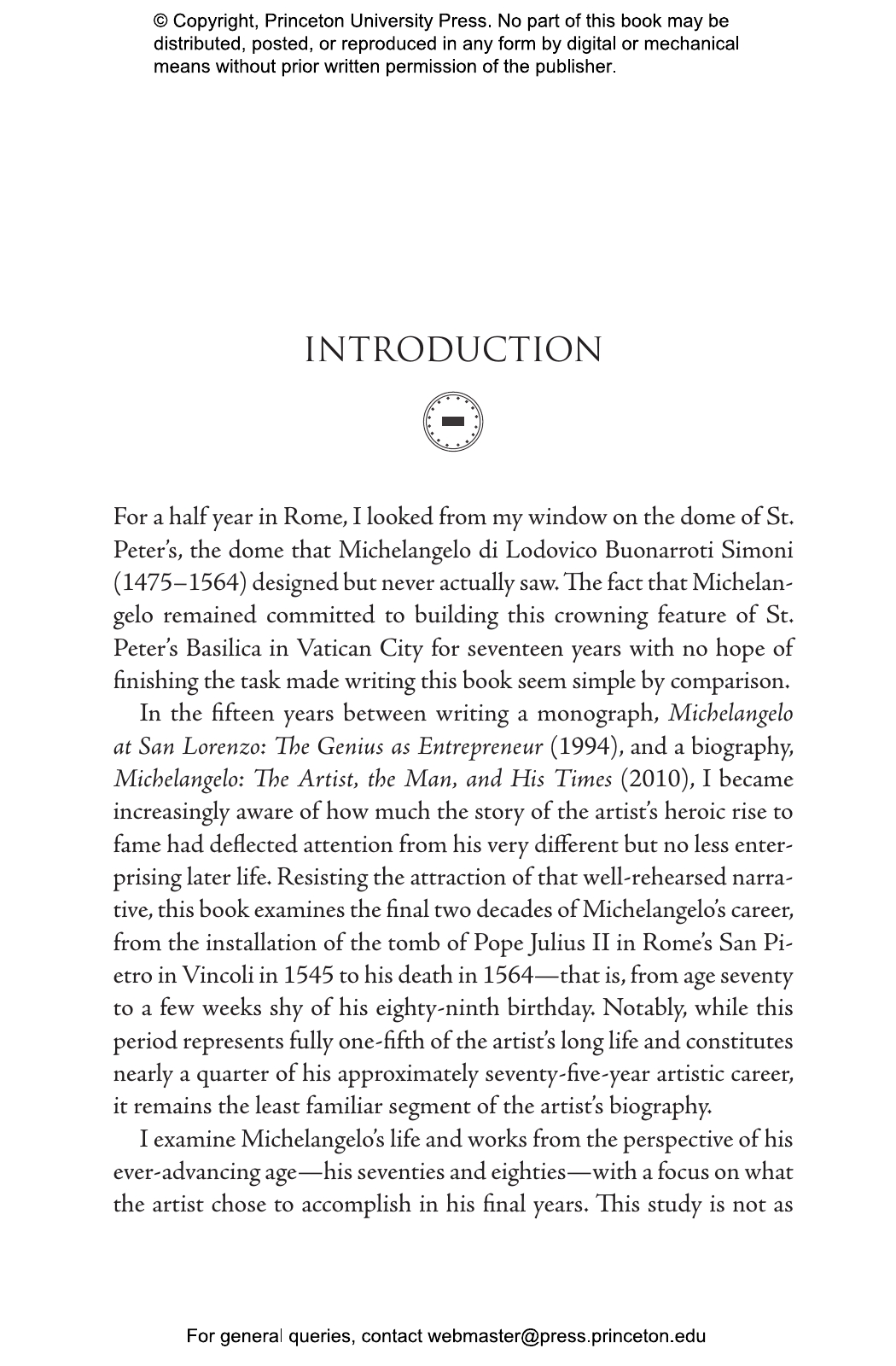 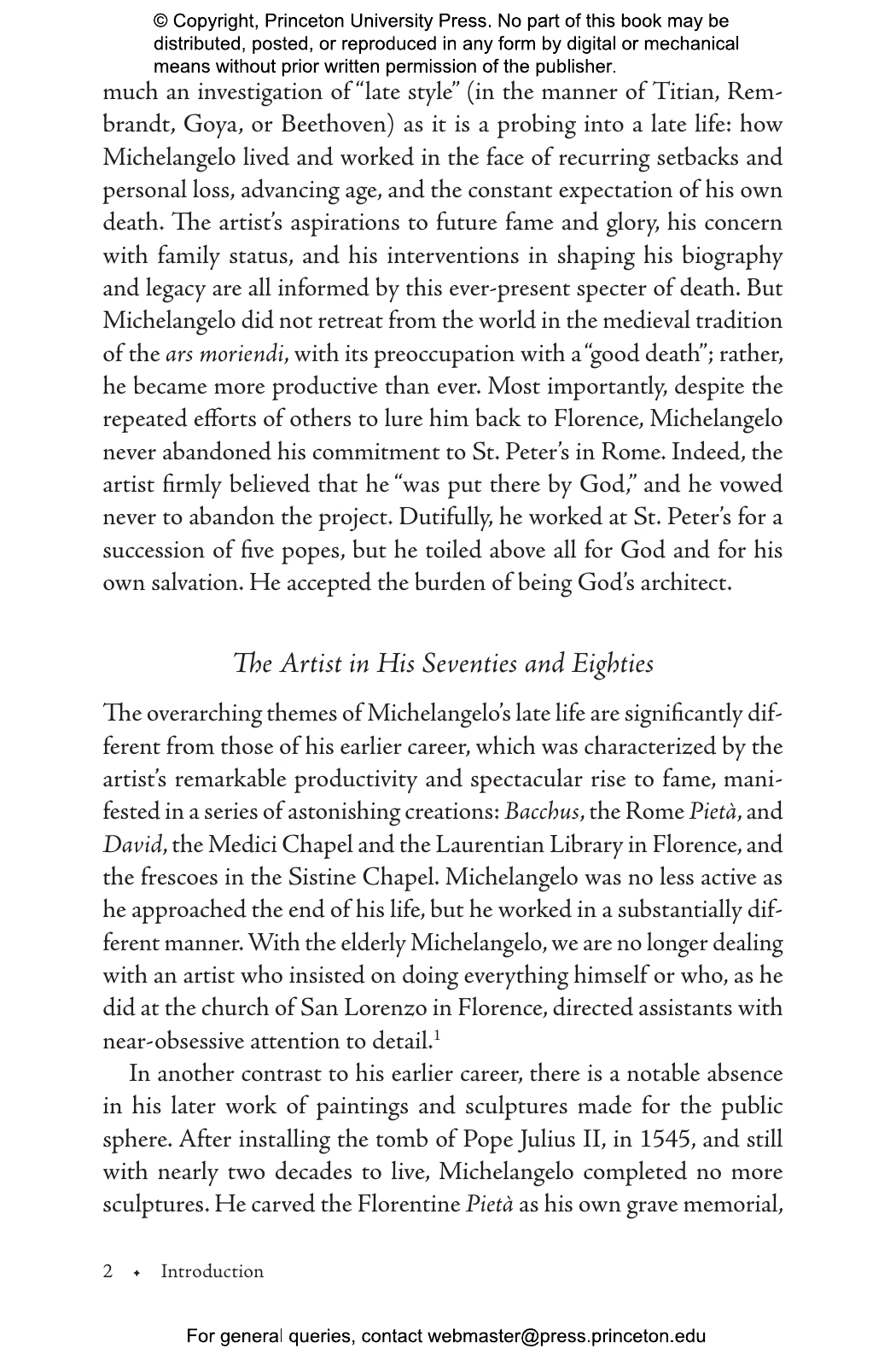 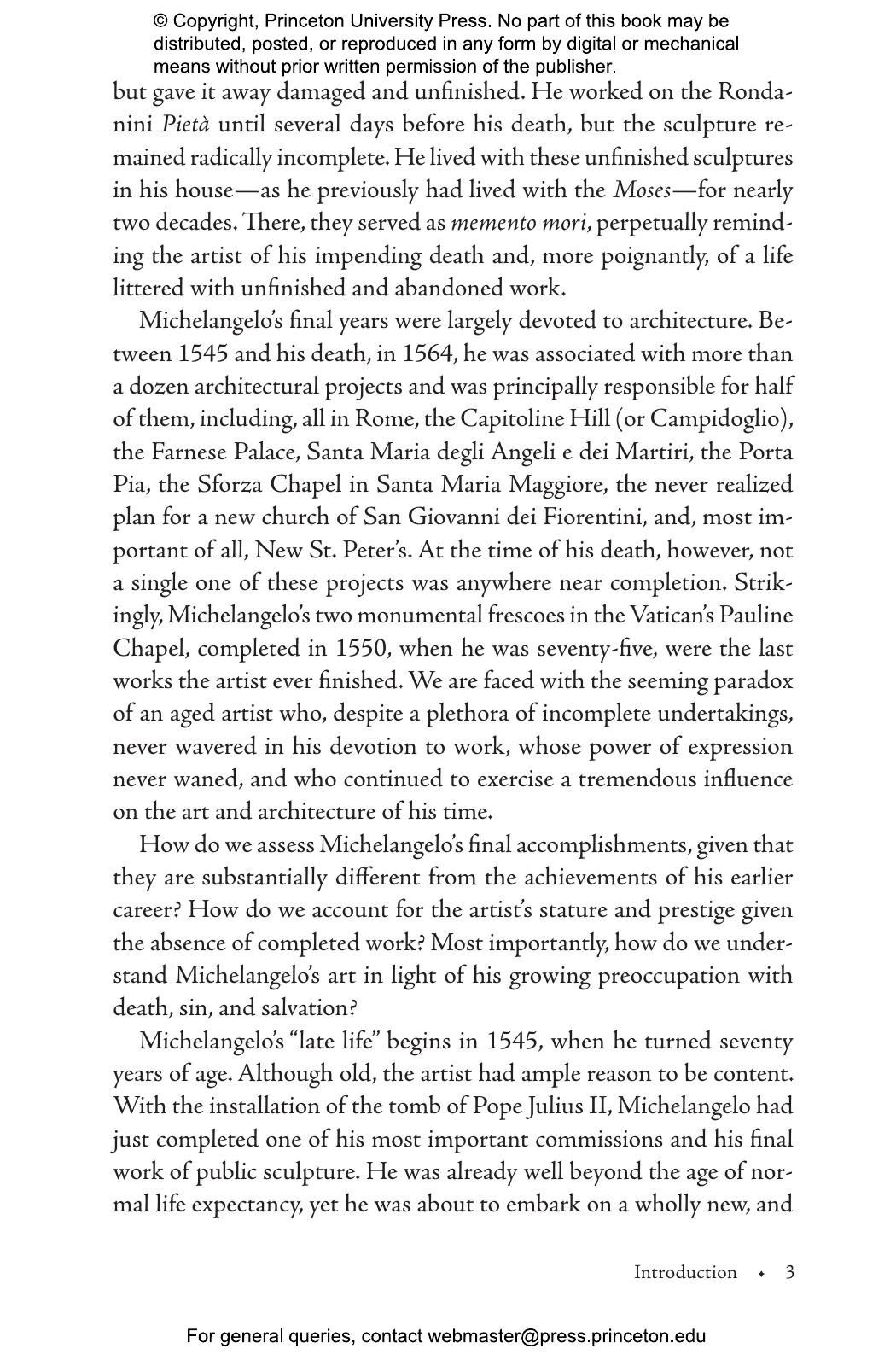 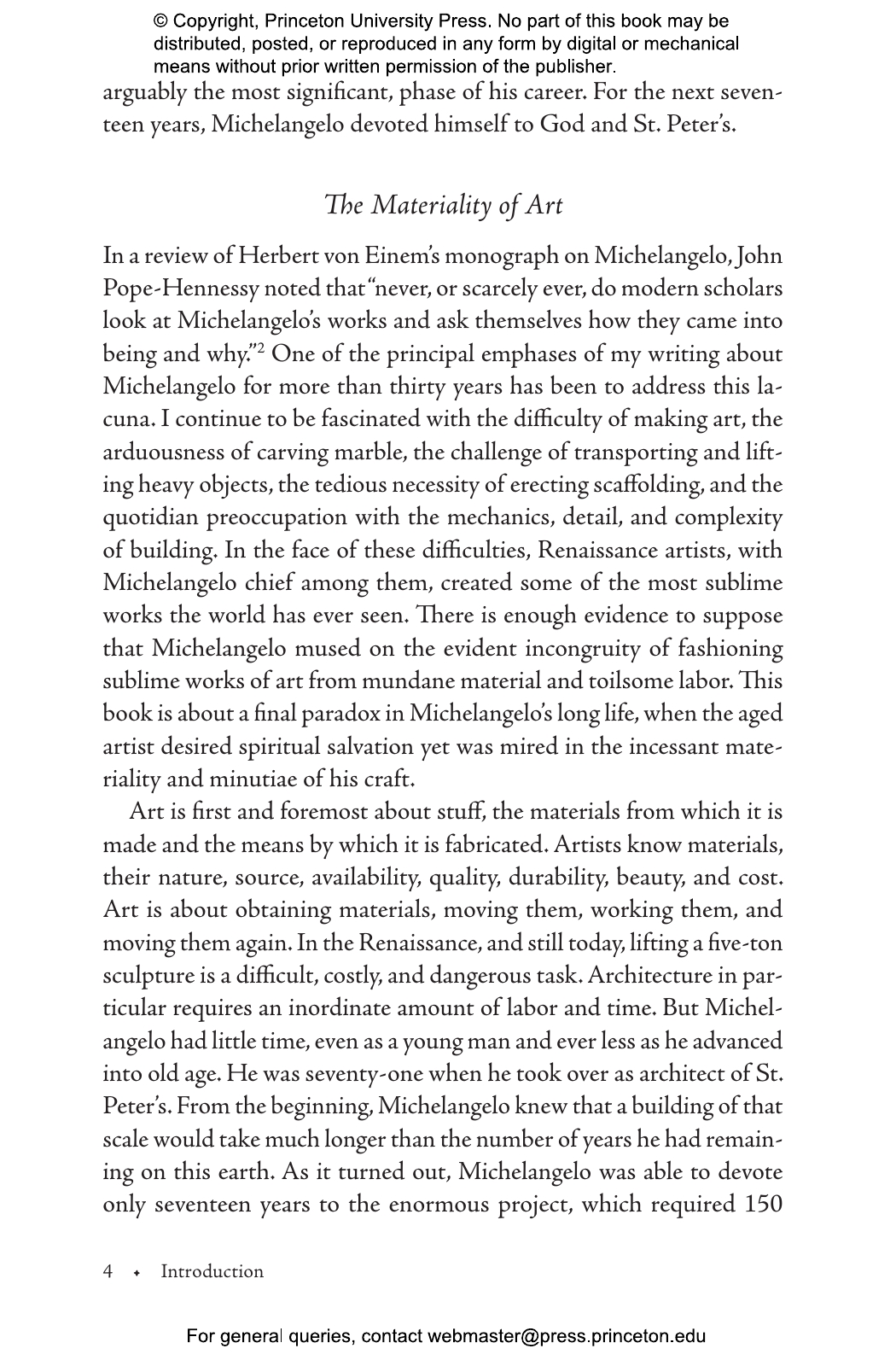 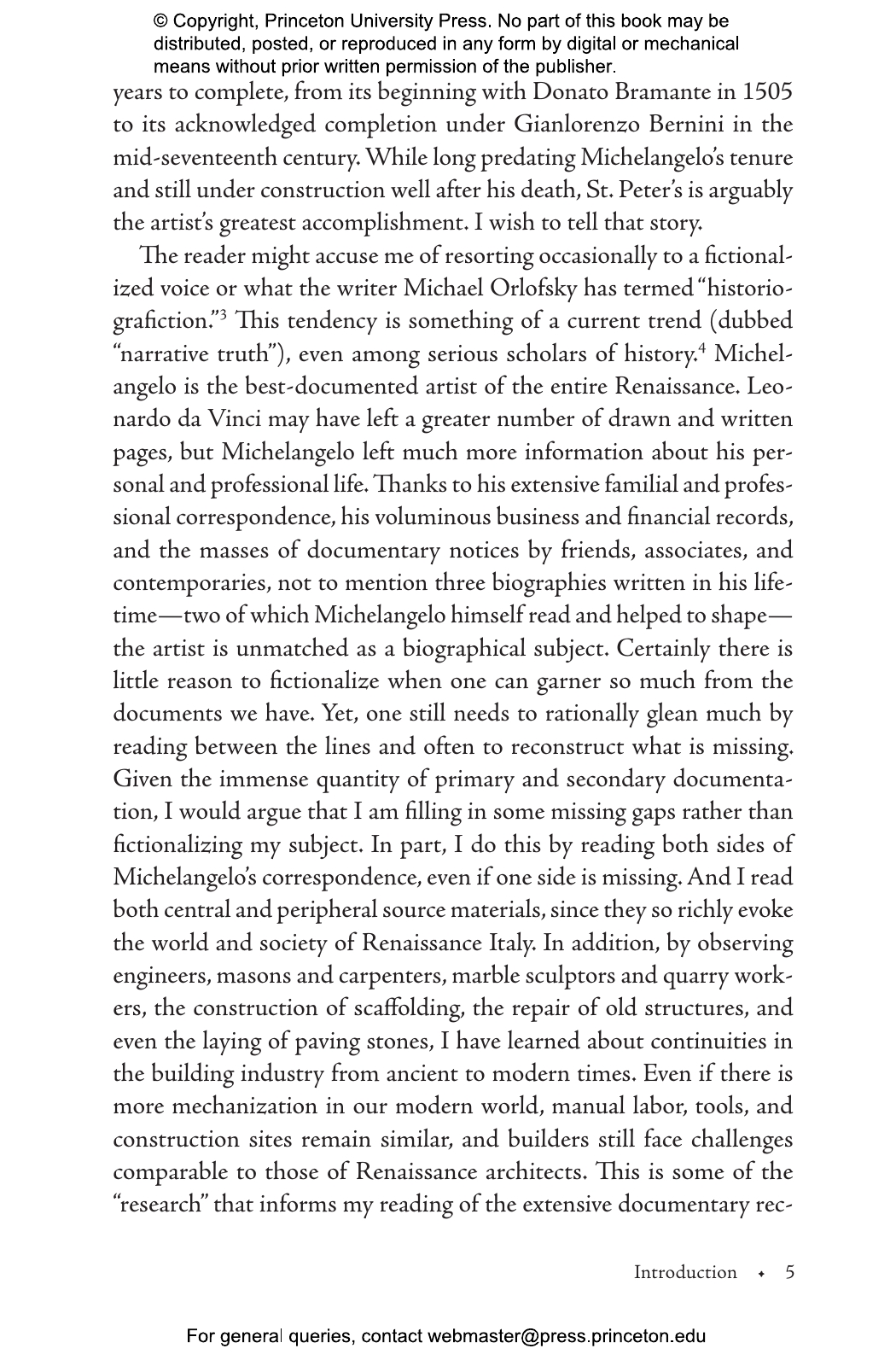 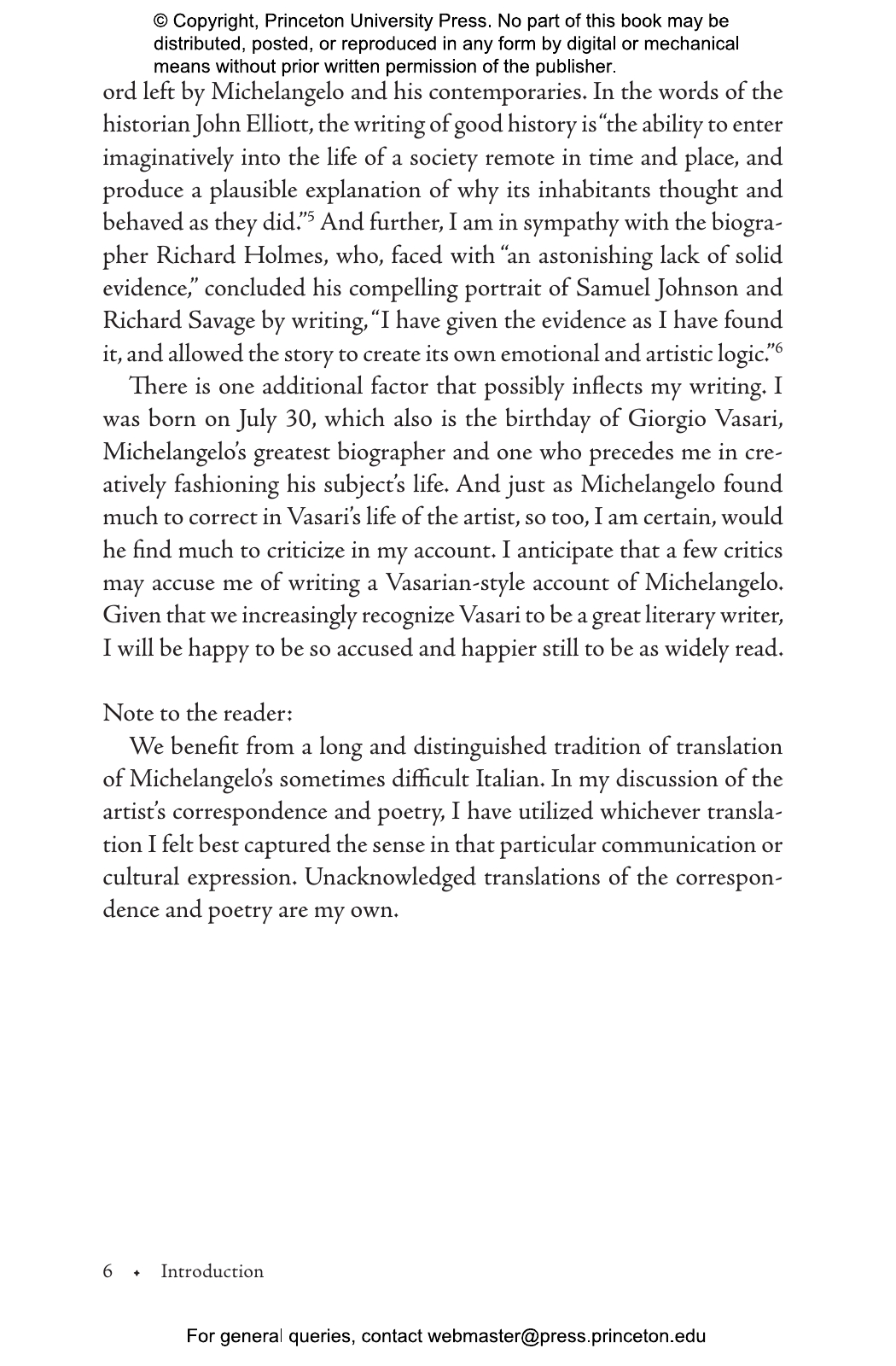 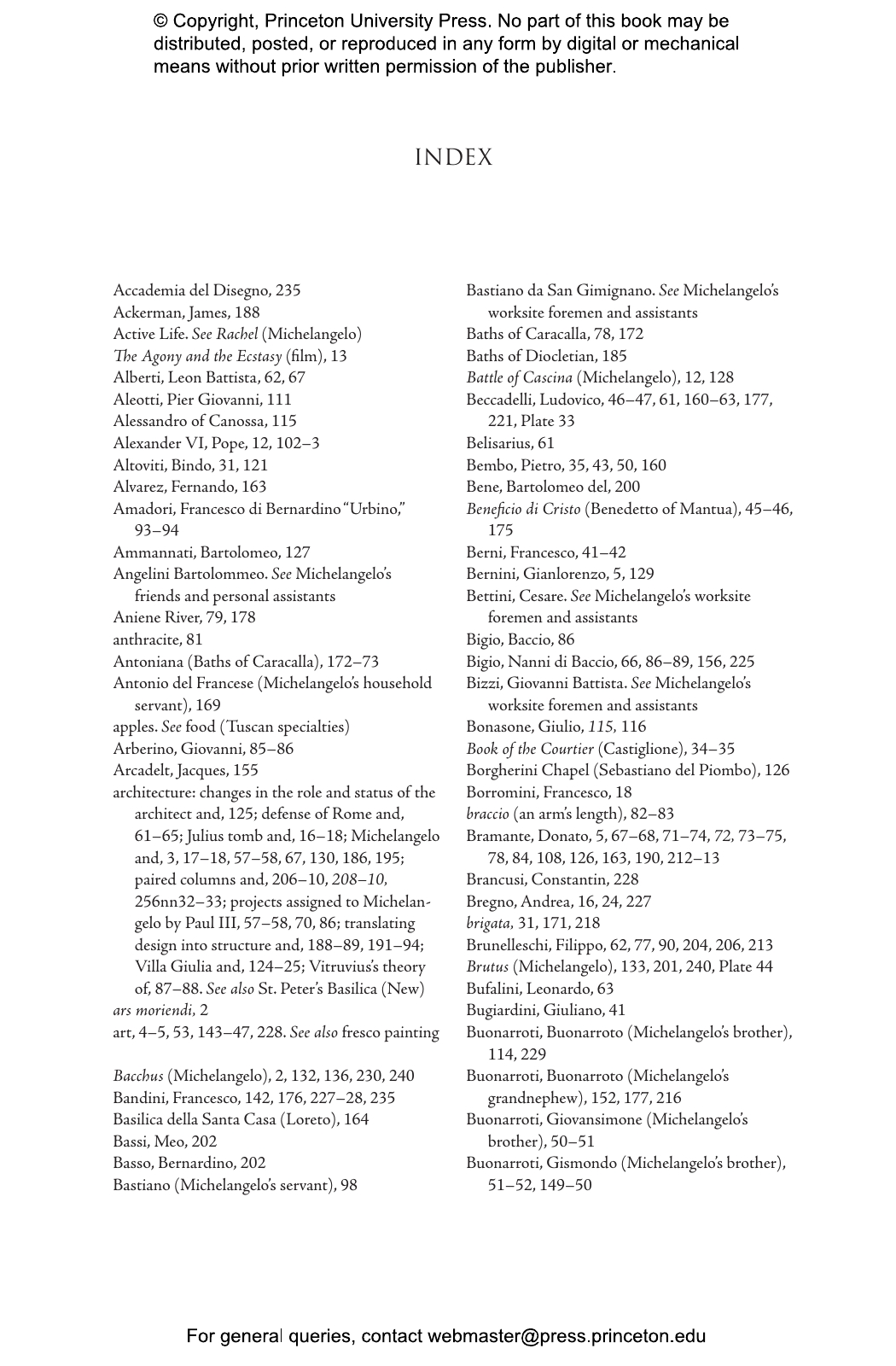 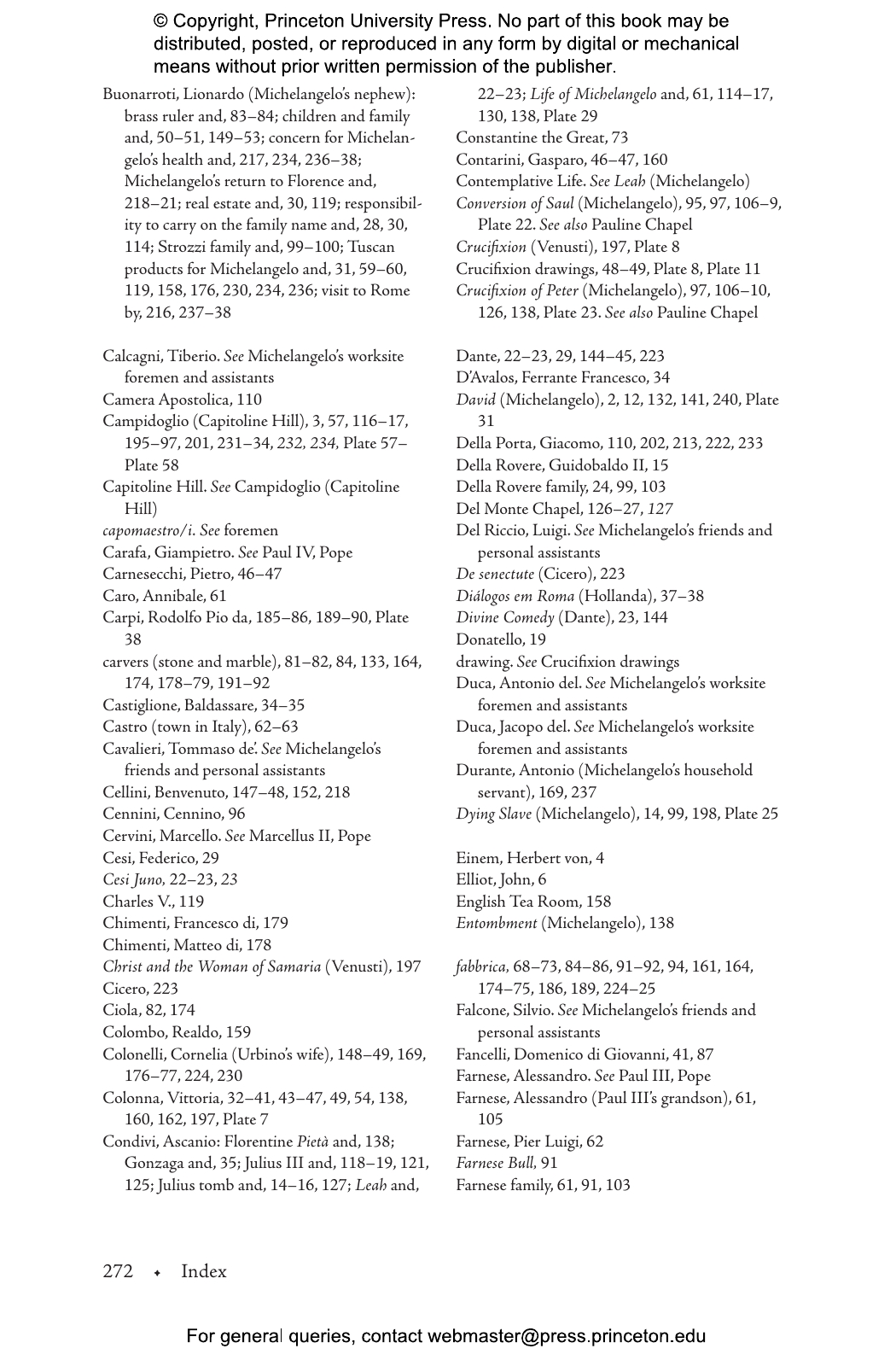 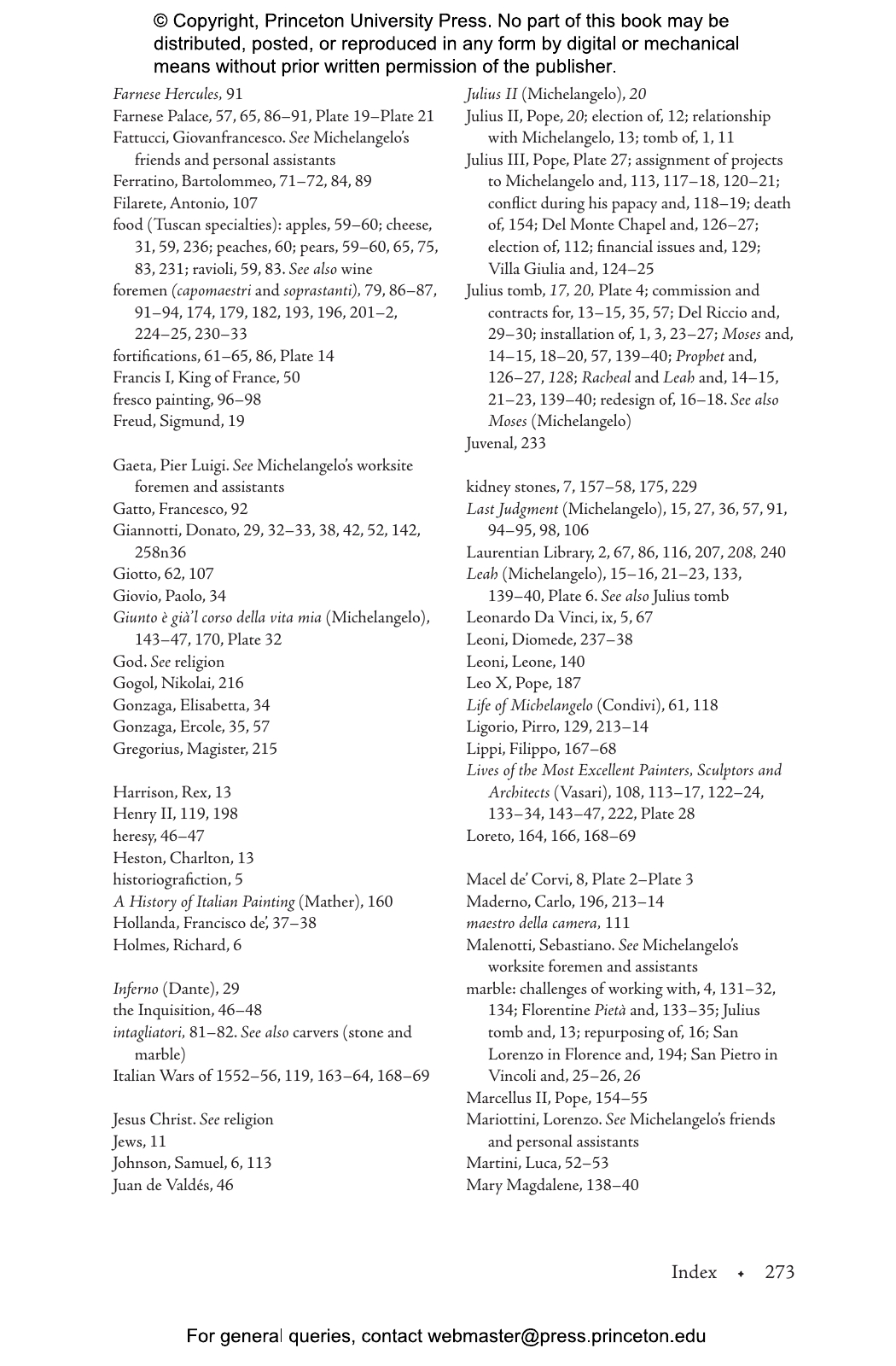 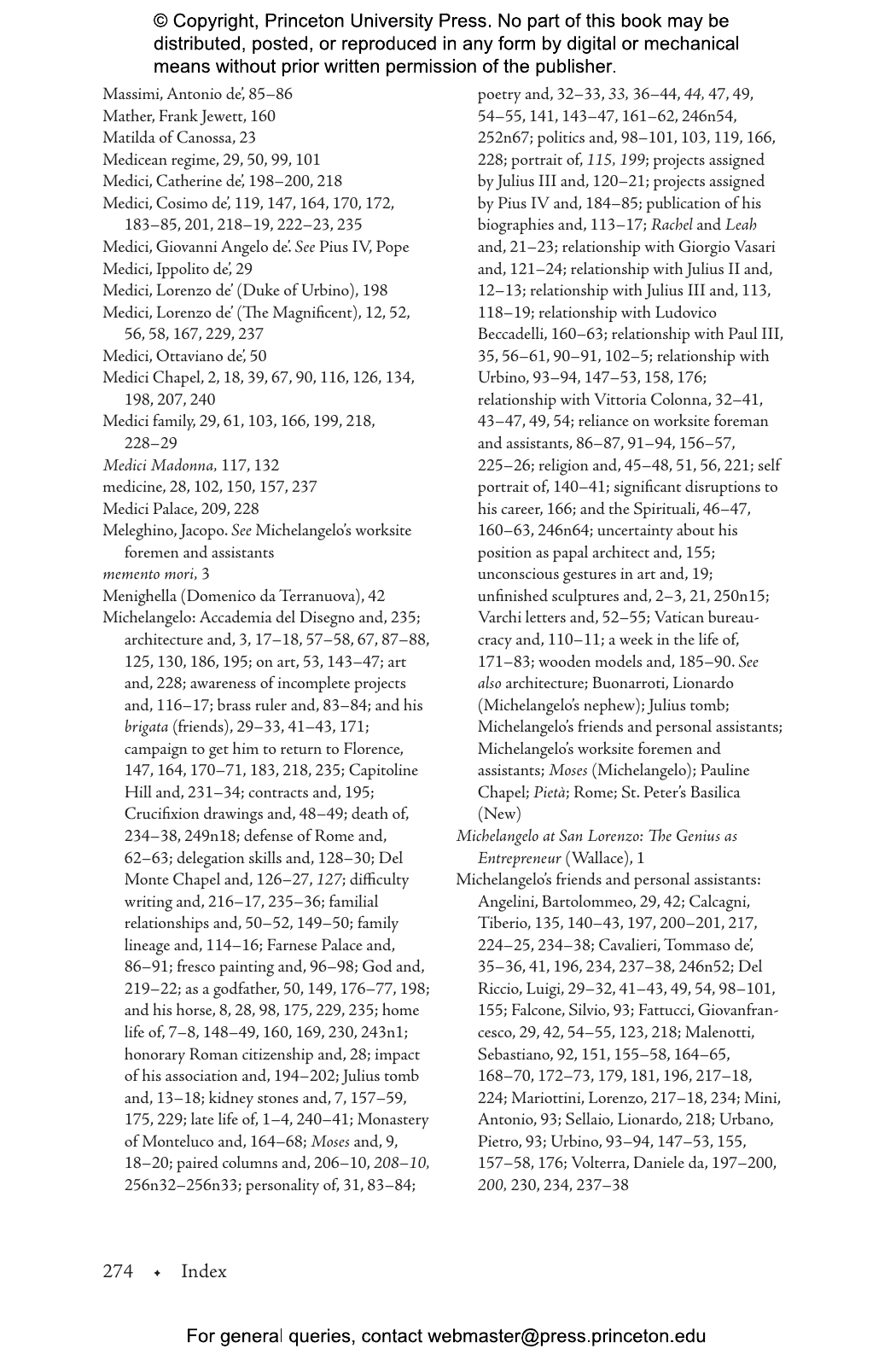 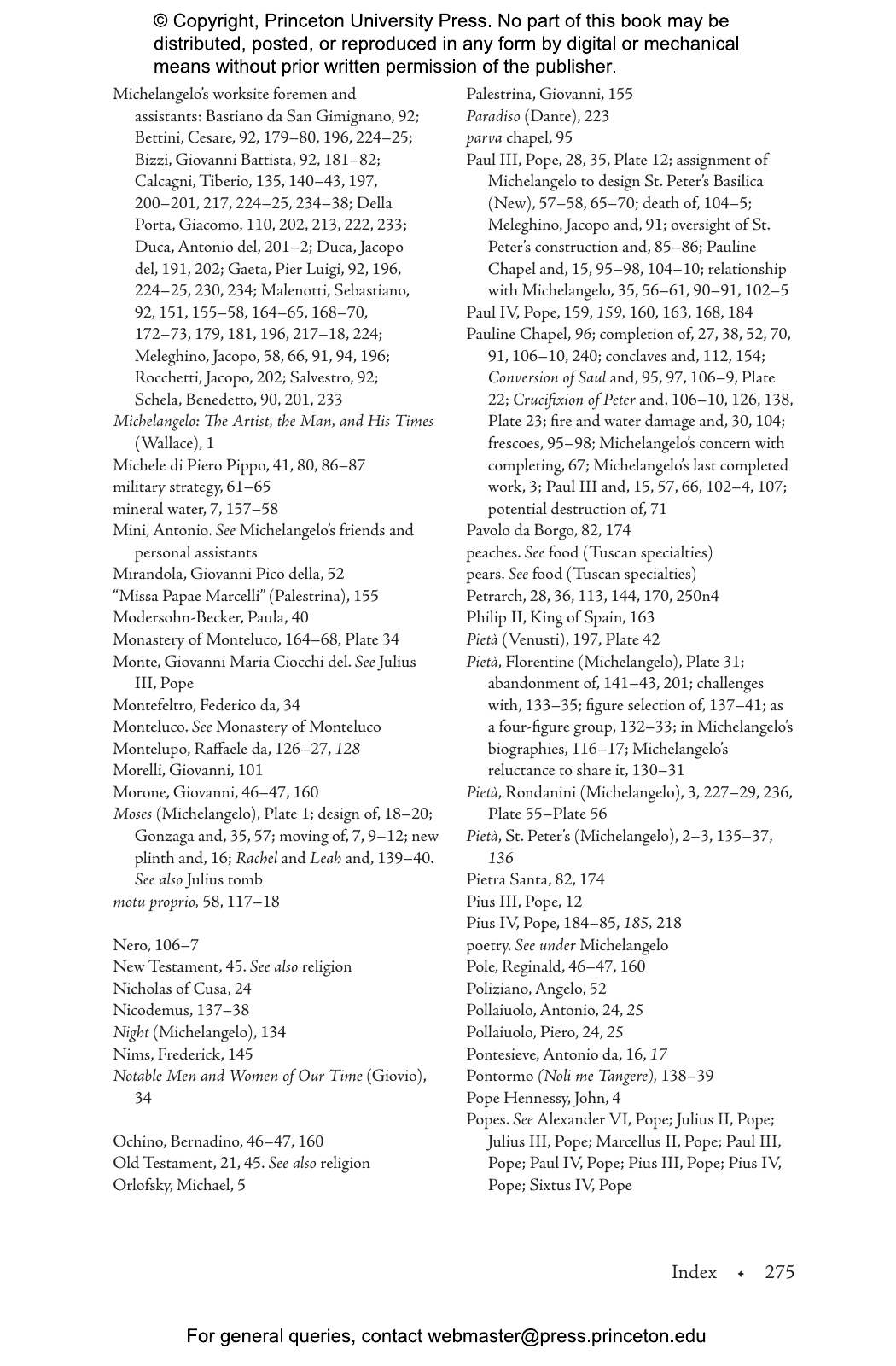 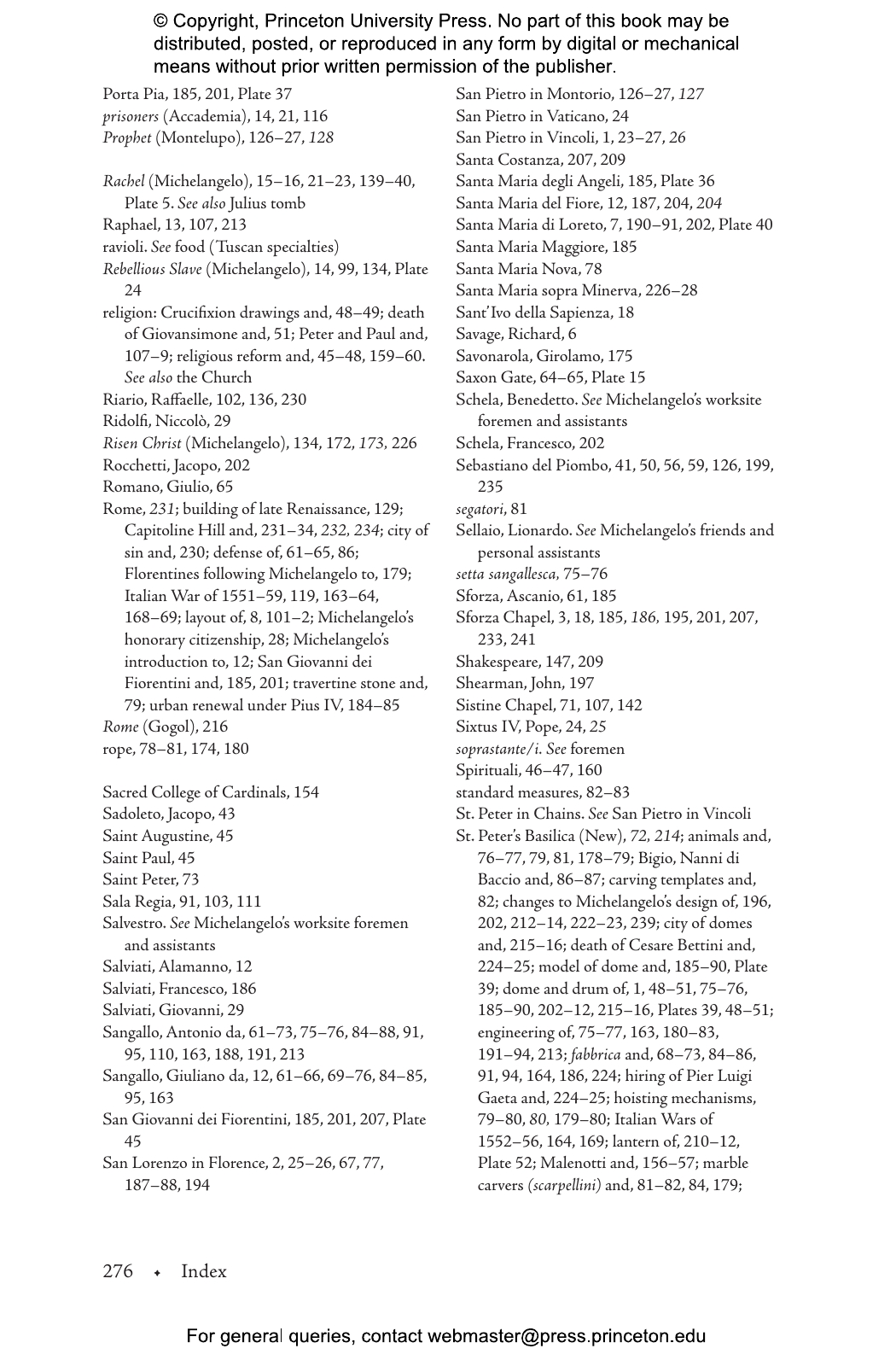 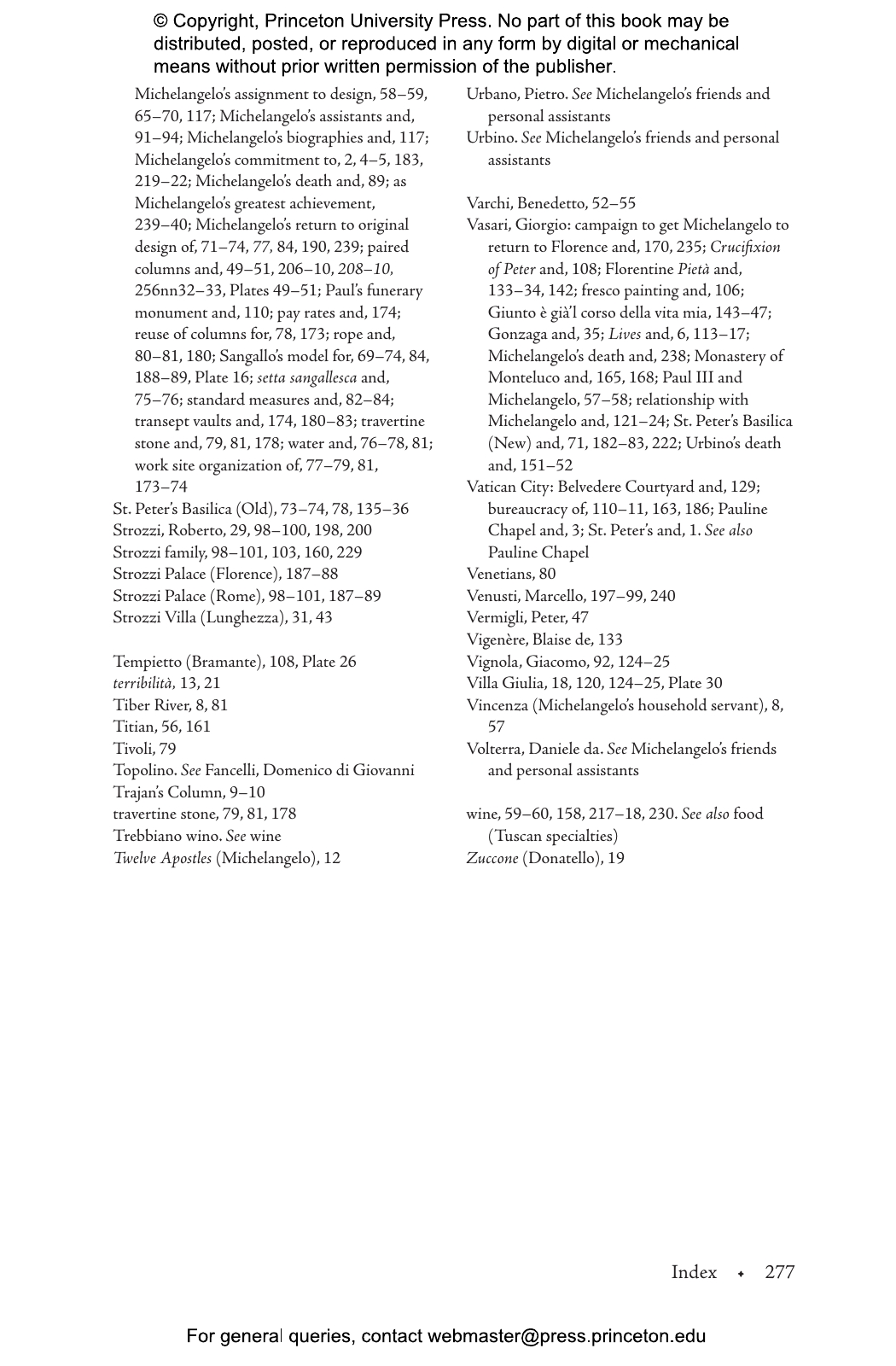 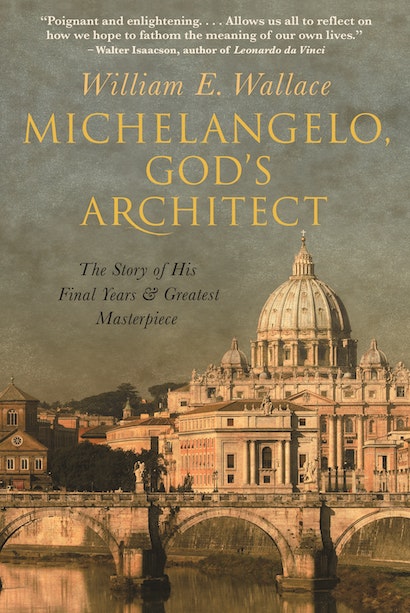 In this richly illustrated book, leading Michelangelo expert William Wallace sheds new light on this least familiar part of Michelangelo’s biography, revealing a creative genius who was also a skilled engineer and enterprising businessman. The challenge of building St. Peter’s deepened Michelangelo’s faith, Wallace shows. Fighting the intrigues of Church politics and his own declining health, Michelangelo became convinced that he was destined to build the largest and most magnificent church ever conceived. And he was determined to live long enough that no other architect could alter his design.

"[An] immaculately researched book. . . . A riveting experience for lovers of any art form. . . . [Wallace] reveals here his masterly skills as a biographer."—Peter Marks, Washington Post

"To this aged Michelangelo, with his frailties, his frustrations, and his insoluble contradictions, William Wallace has devoted the latest and most poignant of his books on the artist. . . . When Michelangelo turned seventy, as he does at the beginning of Michelangelo, God’s Architect, he had nineteen more years to live, every one of them spent at work. As dear friends died and his body weakened, he took on a remarkable series of huge, daunting projects, fully aware, as Wallace emphasizes, that he would never live to see them completed. In his deeply spiritual vision of the world, his own limits hardly mattered; God had called him, and he had answered. . . . Wallace, in turn, relies on his own experience to take bold risks as a writer, pushing the haphazard evidence that survives from sixteenth-century Rome to bring the city and its people to life."—Ingrid D. Rowland, New York Review of Books

"Wallace brilliantly evokes the day-to-day life of the project as Michelangelo struggled to resolve its many difficulties, which included dealing with the mechanics of the building operation, the calculations of the amount of travertine required, the quarrymen at Tivoli and the practicalities of transport."—Catherine Fletcher, Literary Review

"In Michelangelo, God’s Architect Wallace presents the artist’s last two decades as the creative climax of a long career whose earlier phases Wallace has explored in previous books. . . . Wallace demonstrates in sympathetic, intimate detail what being an old, famous, phenomenally active artist entailed on a day-to-day basis in Renaissance Rome. . . . Wallace’s Michelangelo is marvellously human. In some ways he remains the same artist I learned about at school. . . . But there’s a more restless, modern consciousness breaking through – like an unfinished figure from the marble – in the way Wallace shows him confronting the fact that even the longest life is too short for completing all that you want to get done."—Michael Bird, The Telegraph

"The strength of Wallace’s work has been to place Michelangelo firmly within his milieu, not as some isolated genius living alone in squalor, but as a human being with strong feelings about friendships and family. . . . He brings the man alive."—James Stevens Curl, Times Higher Education

"[Michelangelo, God’s Architect] offers a rich, lively, fascinating, biographical examination of the last two decades of Michelangelo’s life. A period when he became the architect of St. Peter’s Basilica and other buildings even as he continued to sculpt and draw . . . [A] superb book!"—Tyler Green, Modern Art Notes

"Including ample illustrations of Michelangelo’s many works of art, this book reveals the active and inimitably creative life of the artist during his final years."—Choice

"In this well-written, informative book, William Wallace casts light on this often-overlooked period of Michelangelo’s life, revealing his mindset as a man and an artist."—Adriano Marinazzo, Architectural Histories

"William Wallace has produced a book that is poignant and enlightening. By looking at Michelangelo's life from the perspective of his later years, Wallace offers a reflection on the artist's sense of his legacy, mission, and the God’s work he was meant to do. This book not only helps us understand Michelangelo and his work on St. Peter's Basilica, it allows us all to reflect on how we hope to fathom the meaning of our own lives."—Walter Isaacson, author of Leonardo da Vinci

"A fascinating new Michelangelo emerges from this account of the last two decades of the artist's long life. William Wallace expertly guides us through Michelangelo's years as an 'old man in a hurry,' proving that his enormous late projects, especially St. Peter's, were every bit as successful, distinctive, and spectacular as anything he achieved in his youth. A remarkable feat of scholarship and storytelling that overturns many myths and misconceptions, and shows the real story to be even more astonishing."—Ross King, author of Brunelleschi’s Dome: How a Renaissance Genius Reinvented Architecture

"This terrific study of old age and genius mixes deep research and expertise with the imaginative touch of a novelist to bring alive a complex and troubled Michelangelo, already a superstar in his own time, as he struggled with his final artistic mission impossible."—Sarah Dunant, author of The Birth of Venus

"Utterly superb. This is a richly synthetic book, written in graceful, often witty, prose, from the most distinguished scholar of Michelangelo now working. Wallace provides an unsurpassed account of Michelangelo's work on St. Peter's."—Paul Barolsky, author of Michelangelo and the Finger of God

"This is a book that only a lifetime of study and a talent for expression could produce—rich in detail, historically evocative, and exquisitely attuned to the intricacies of Michelangelo's achievements in his final years."—Deborah Parker, author of Michelangelo and the Art of Letter Writing

"Authoritative, innovative, imaginative, and beautifully and passionately written, this is an important book by the major scholar of Michelangelo of the past several decades. Wallace skillfully communicates the small details of Michelangelo's life and the larger significance of his achievement."—Roger J. Crum, coeditor of Renaissance Florence: A Social History