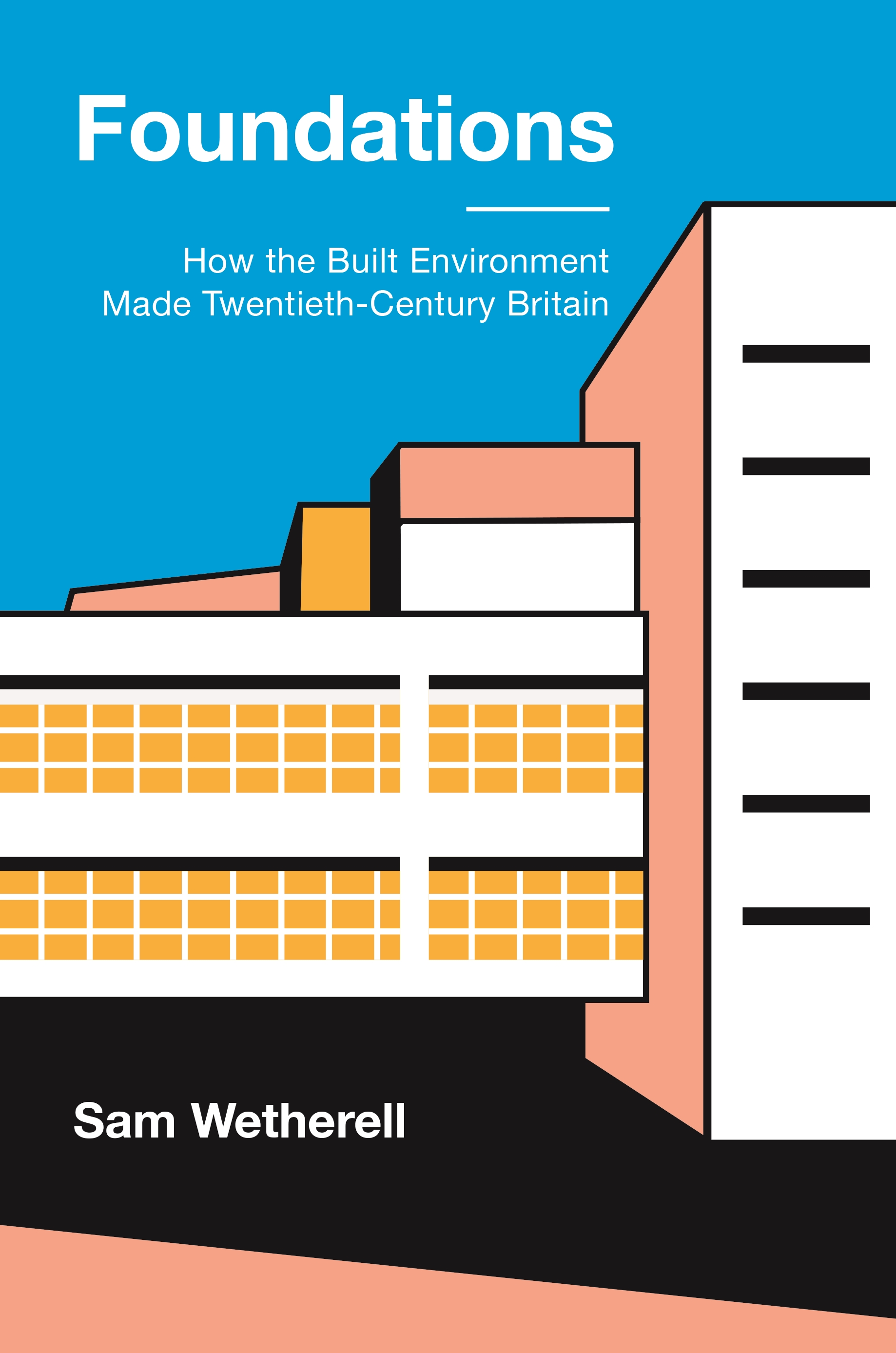 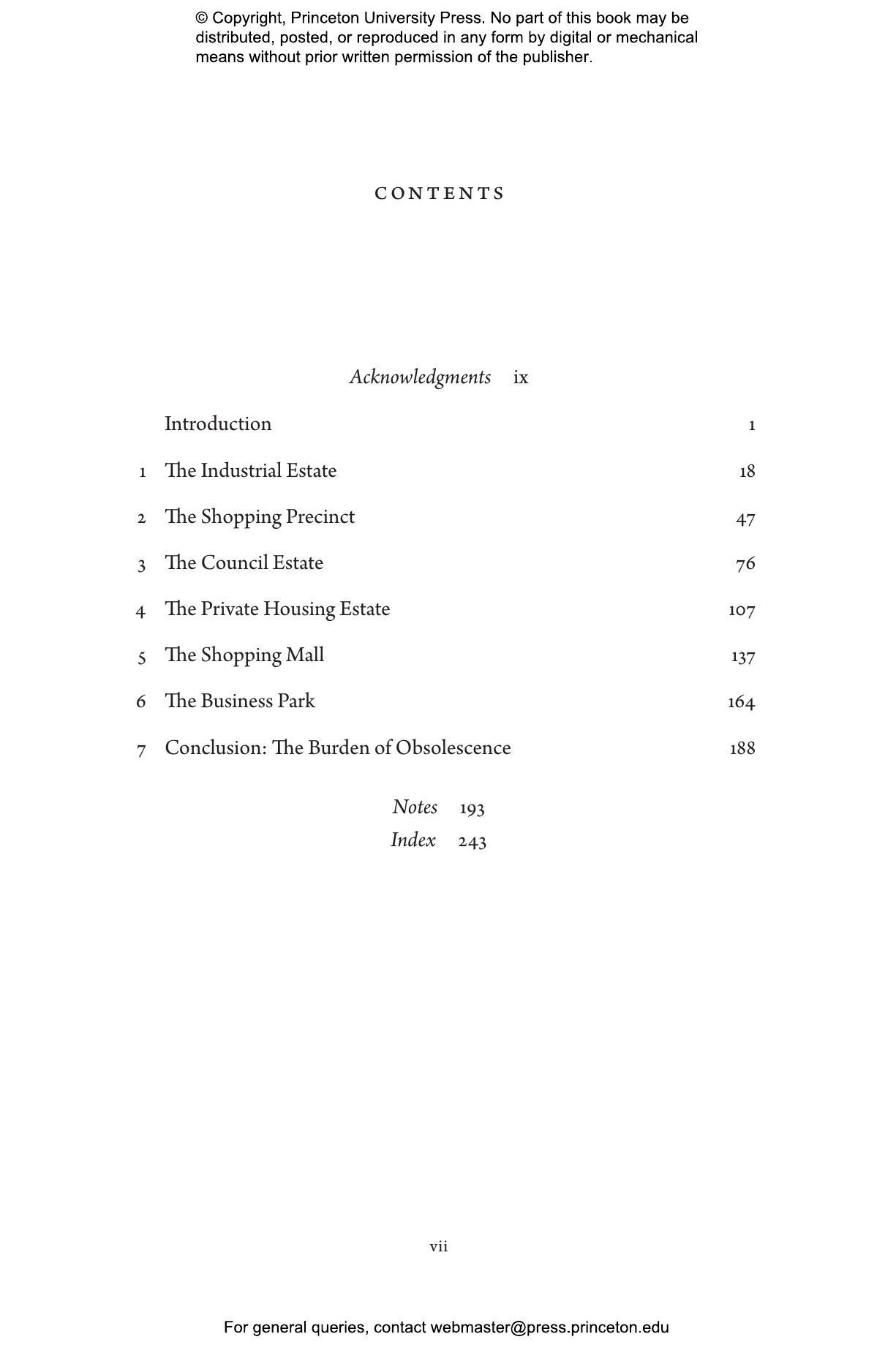 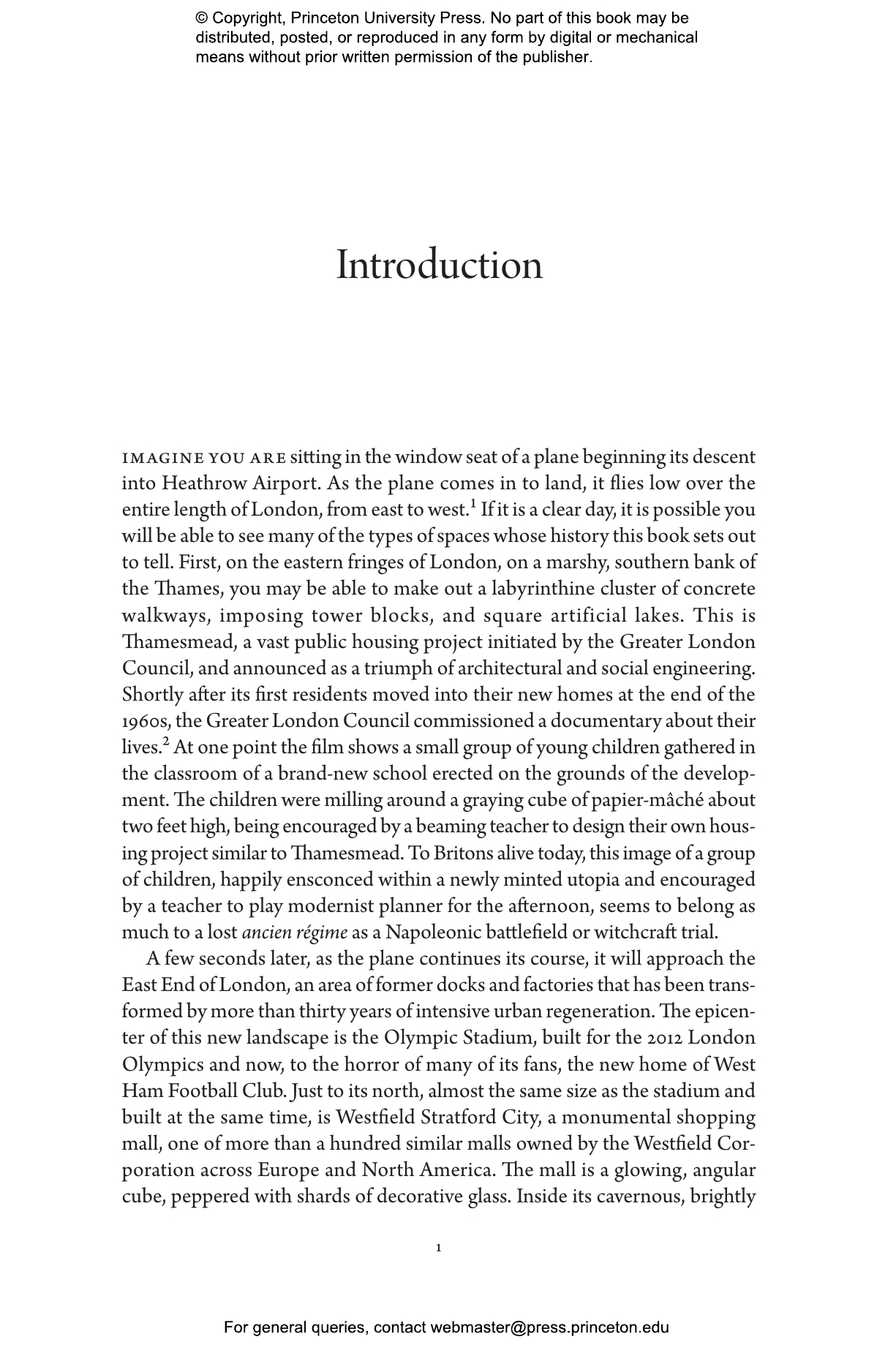 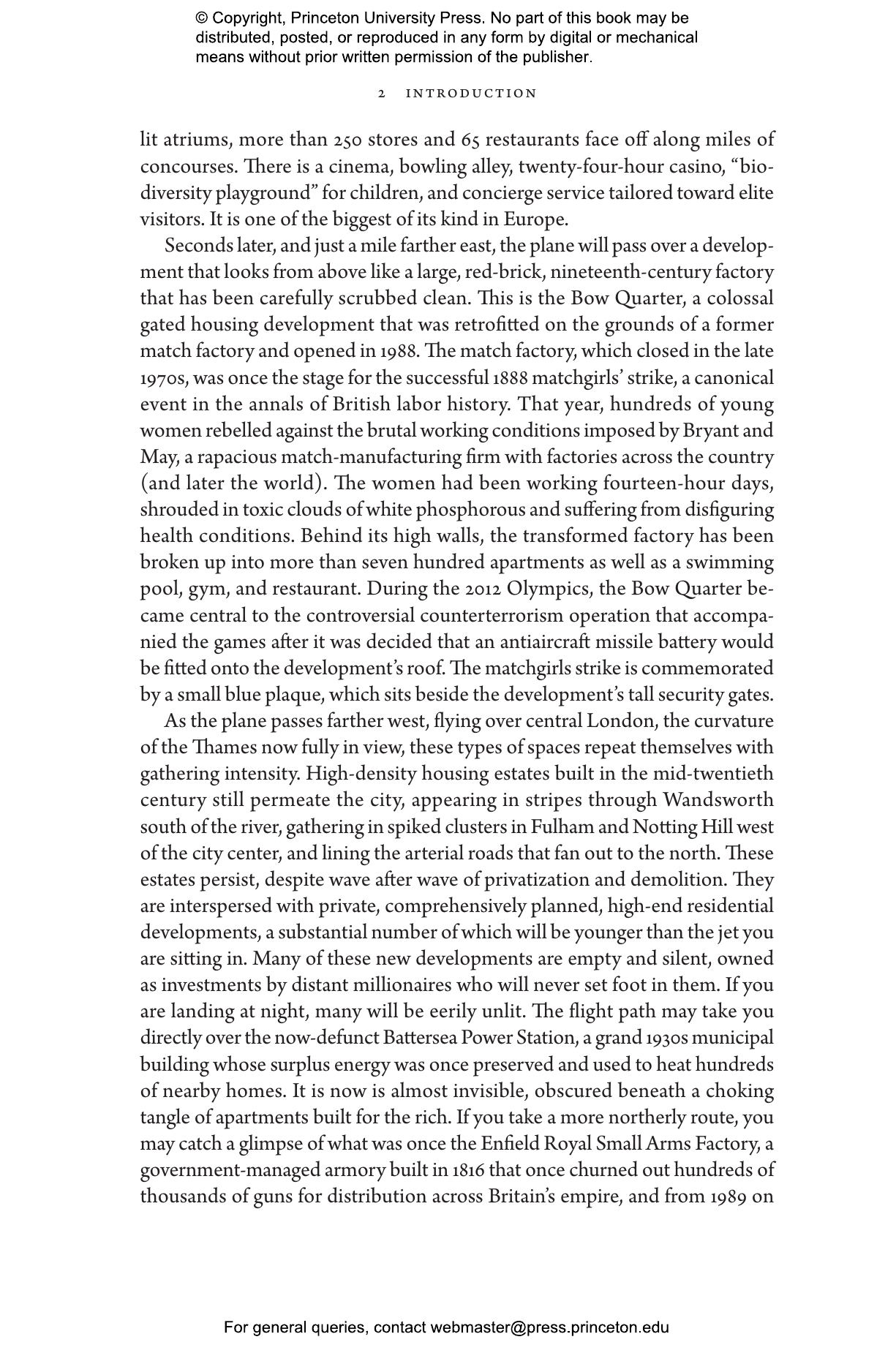 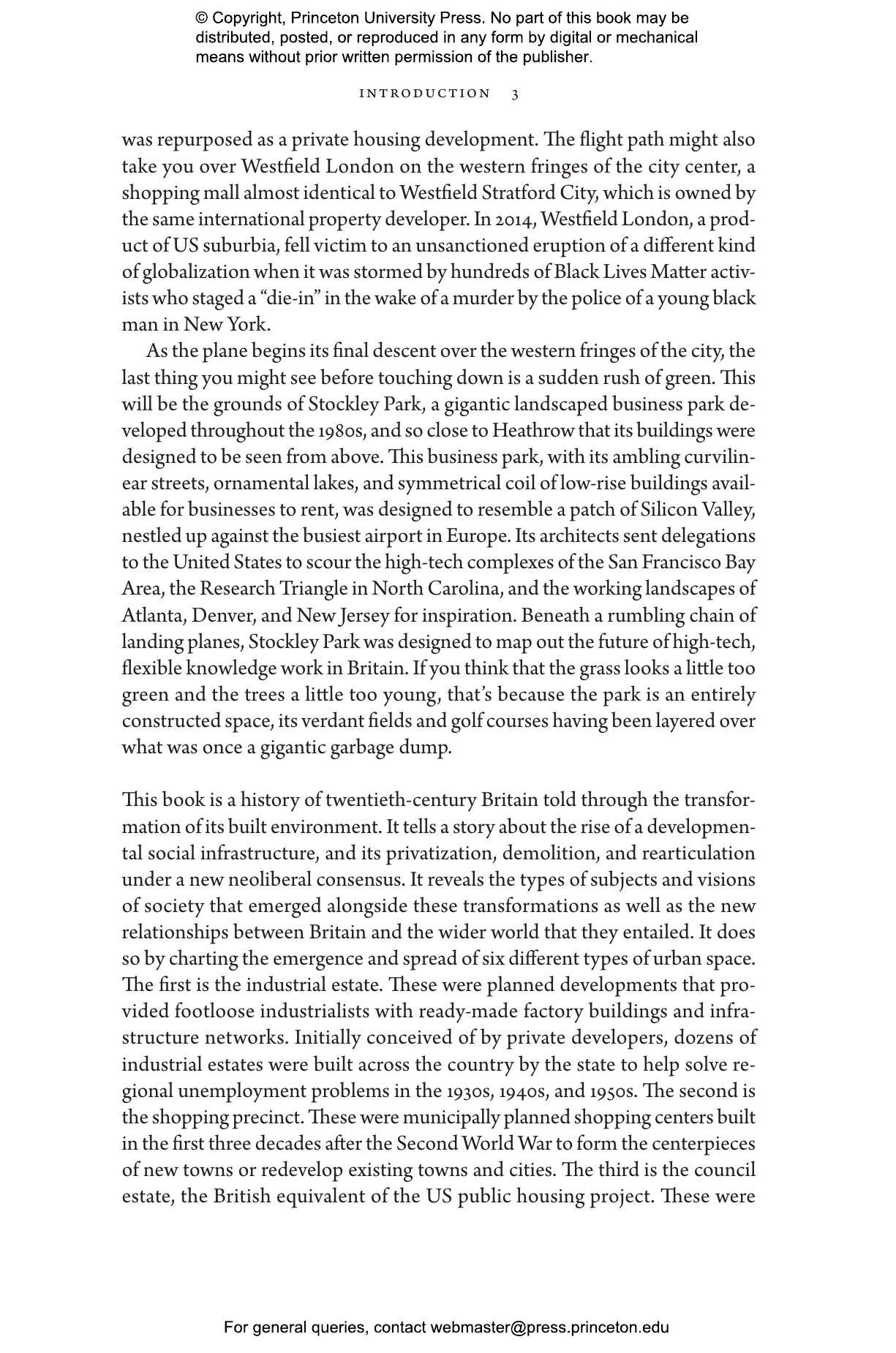 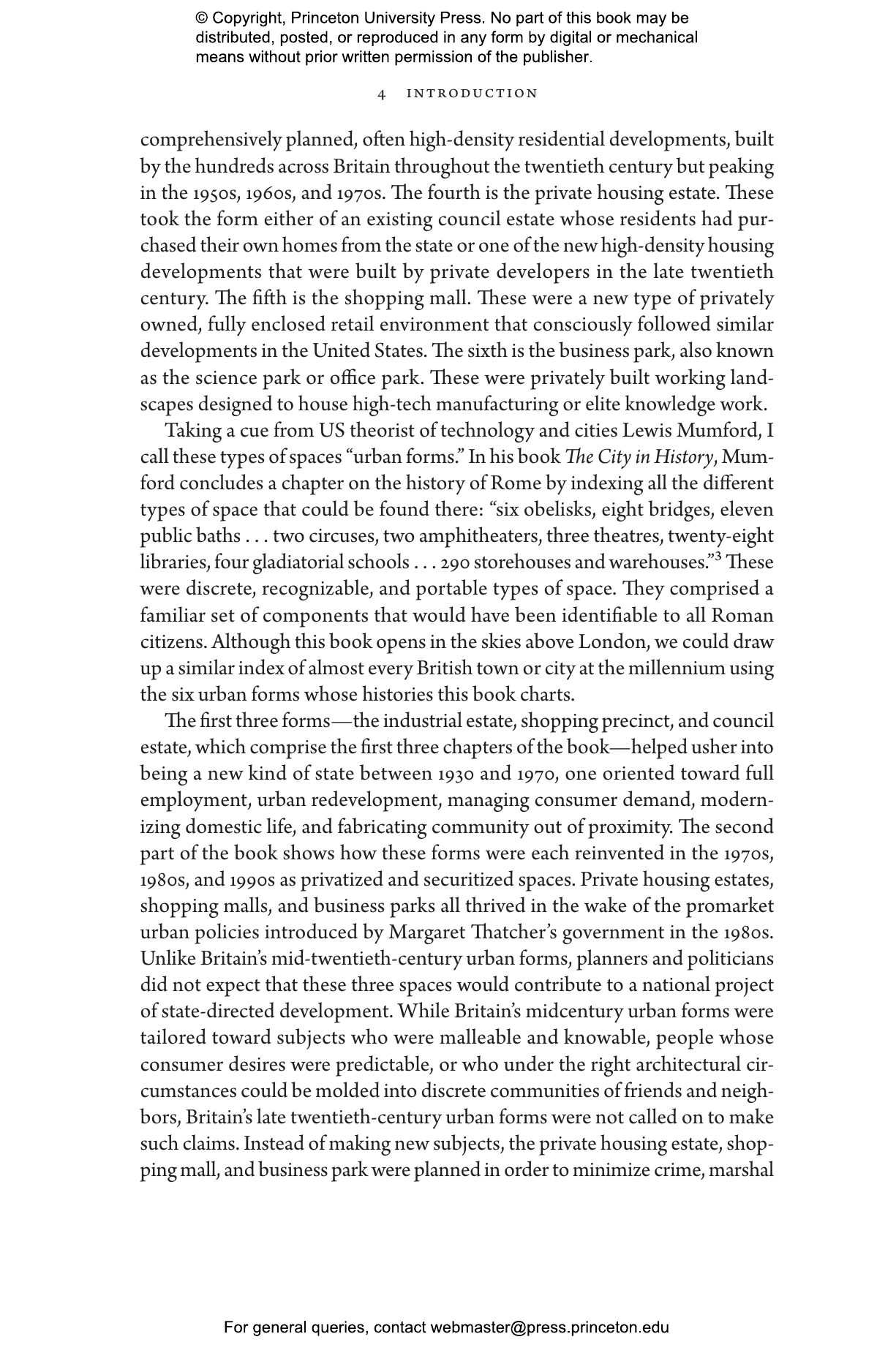 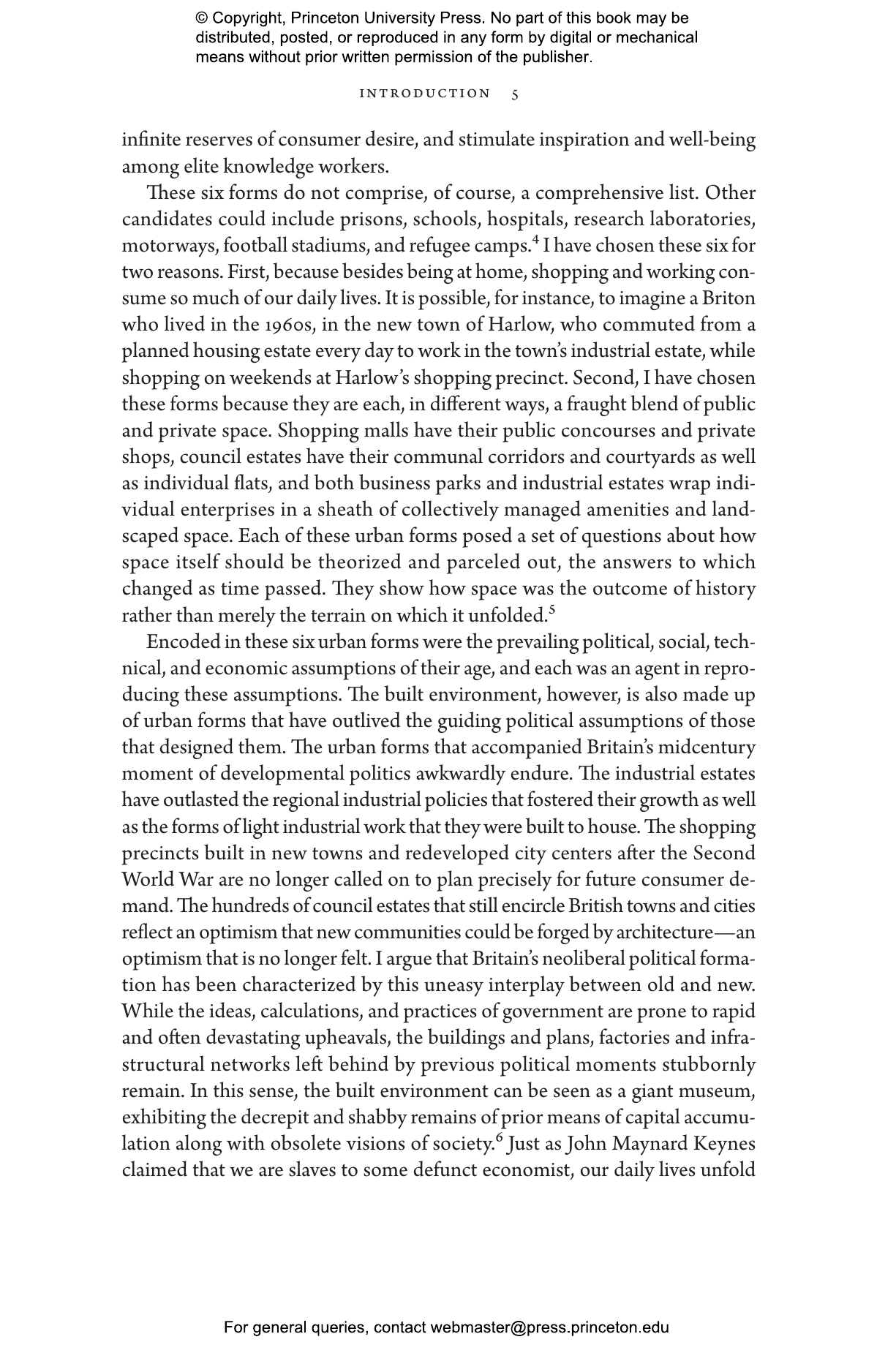 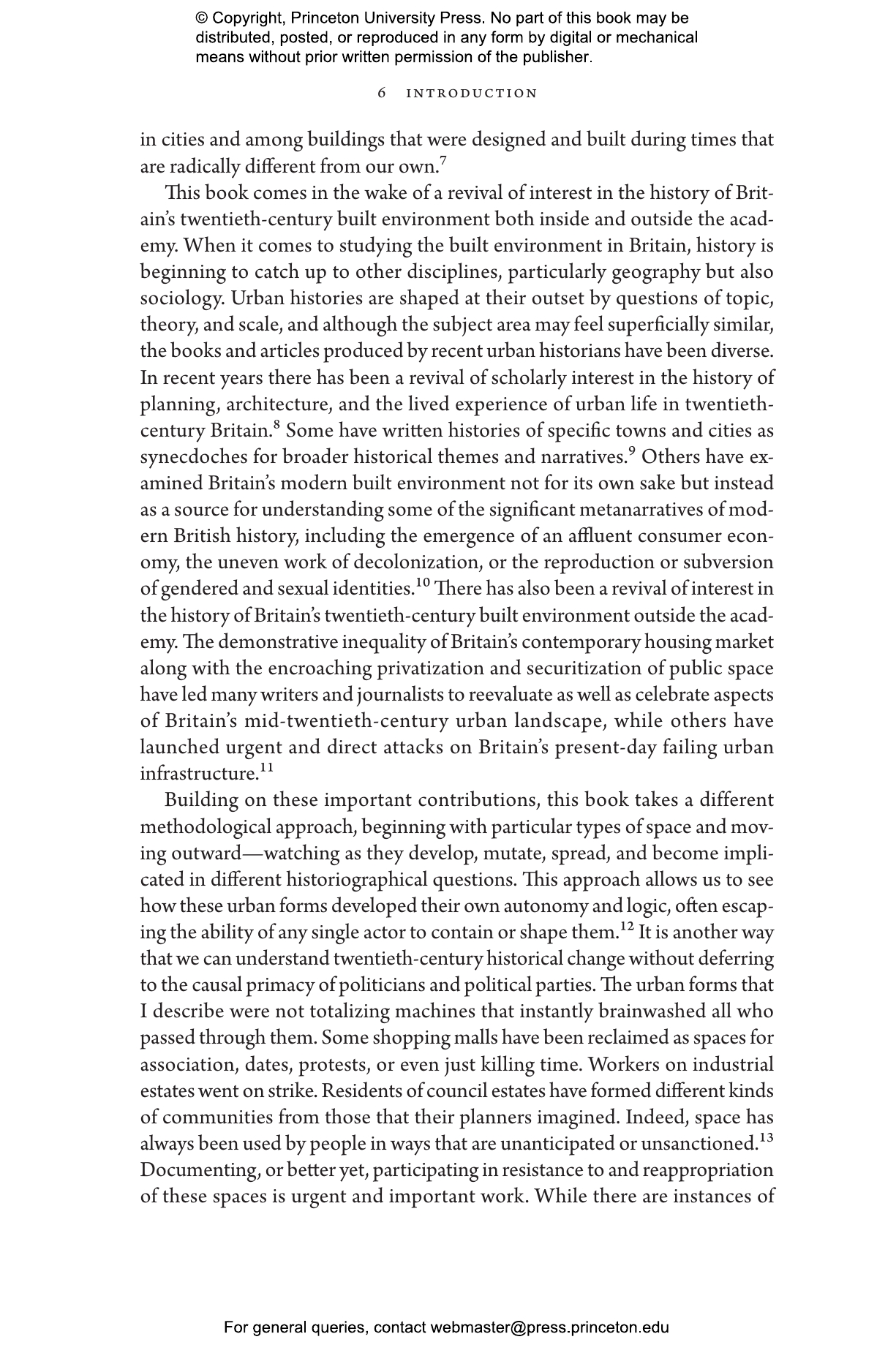 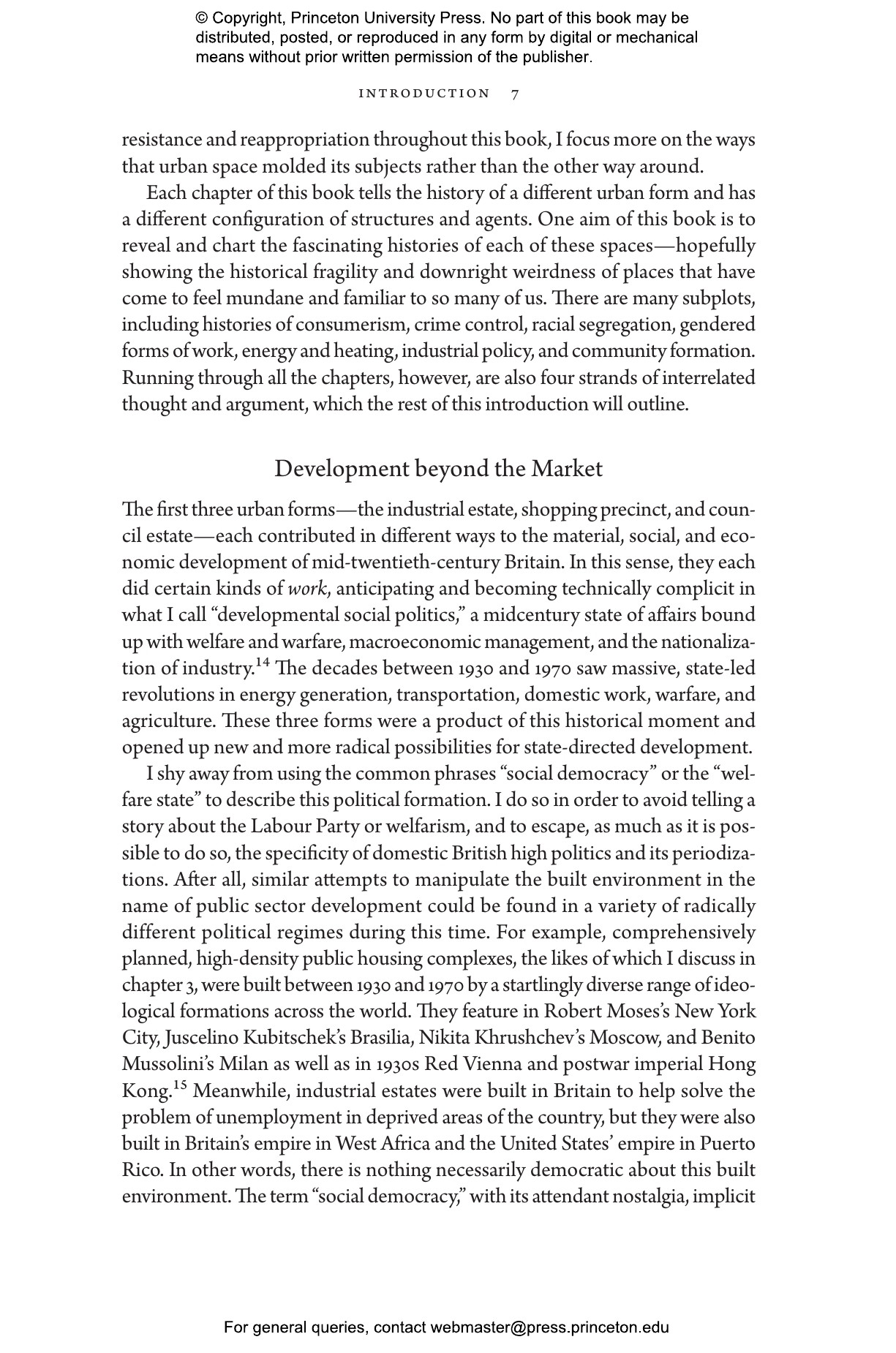 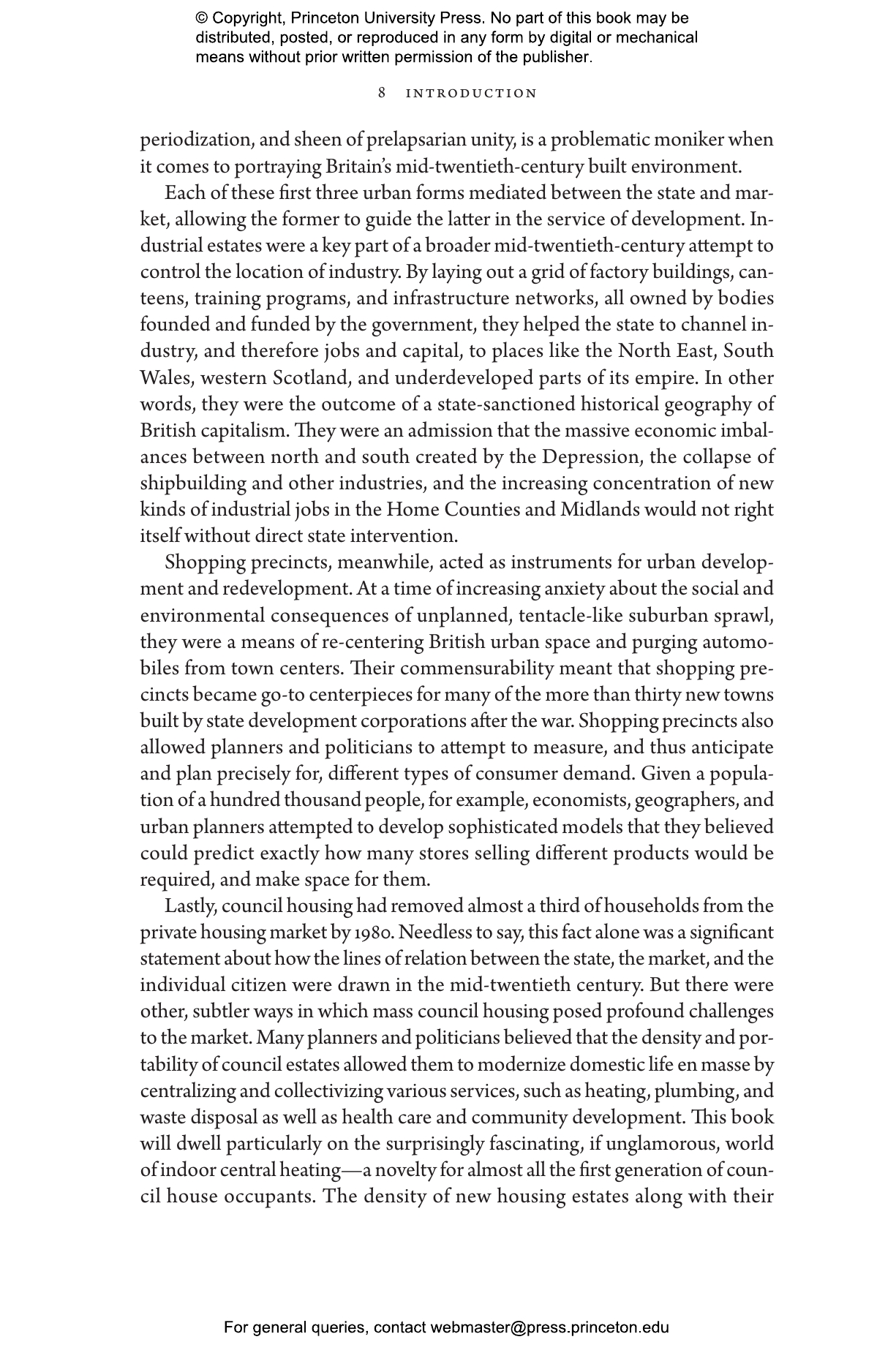 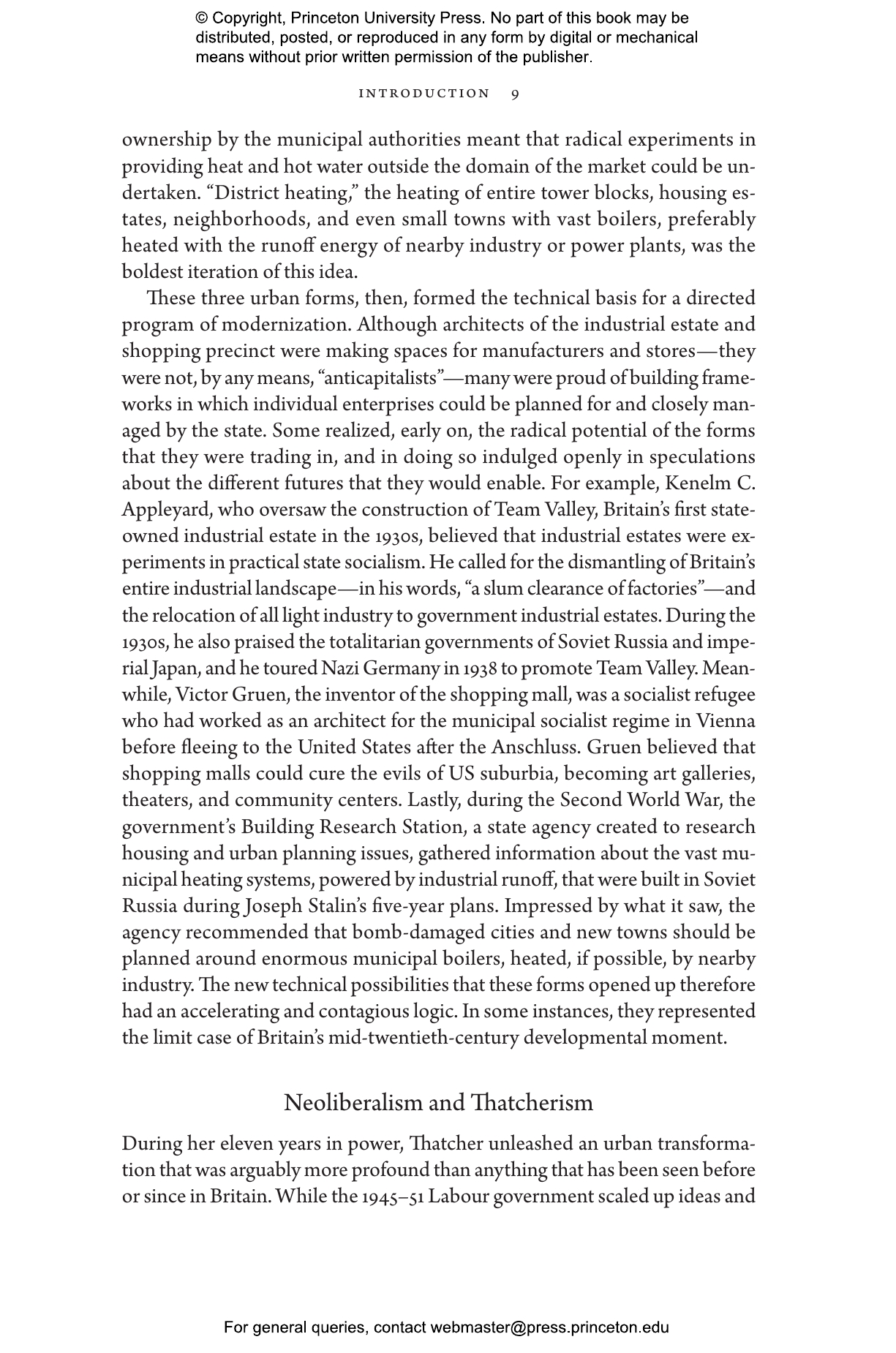 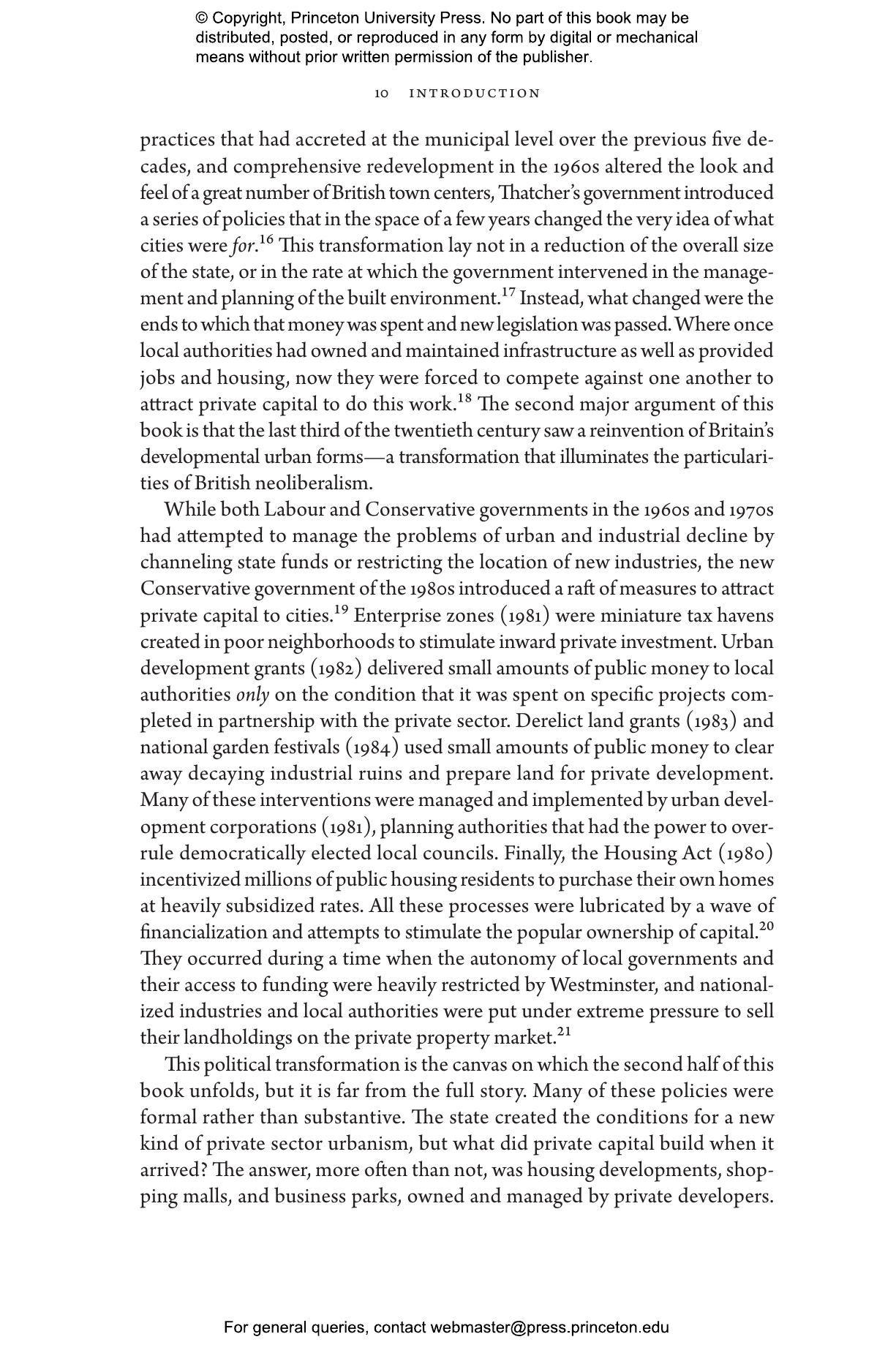 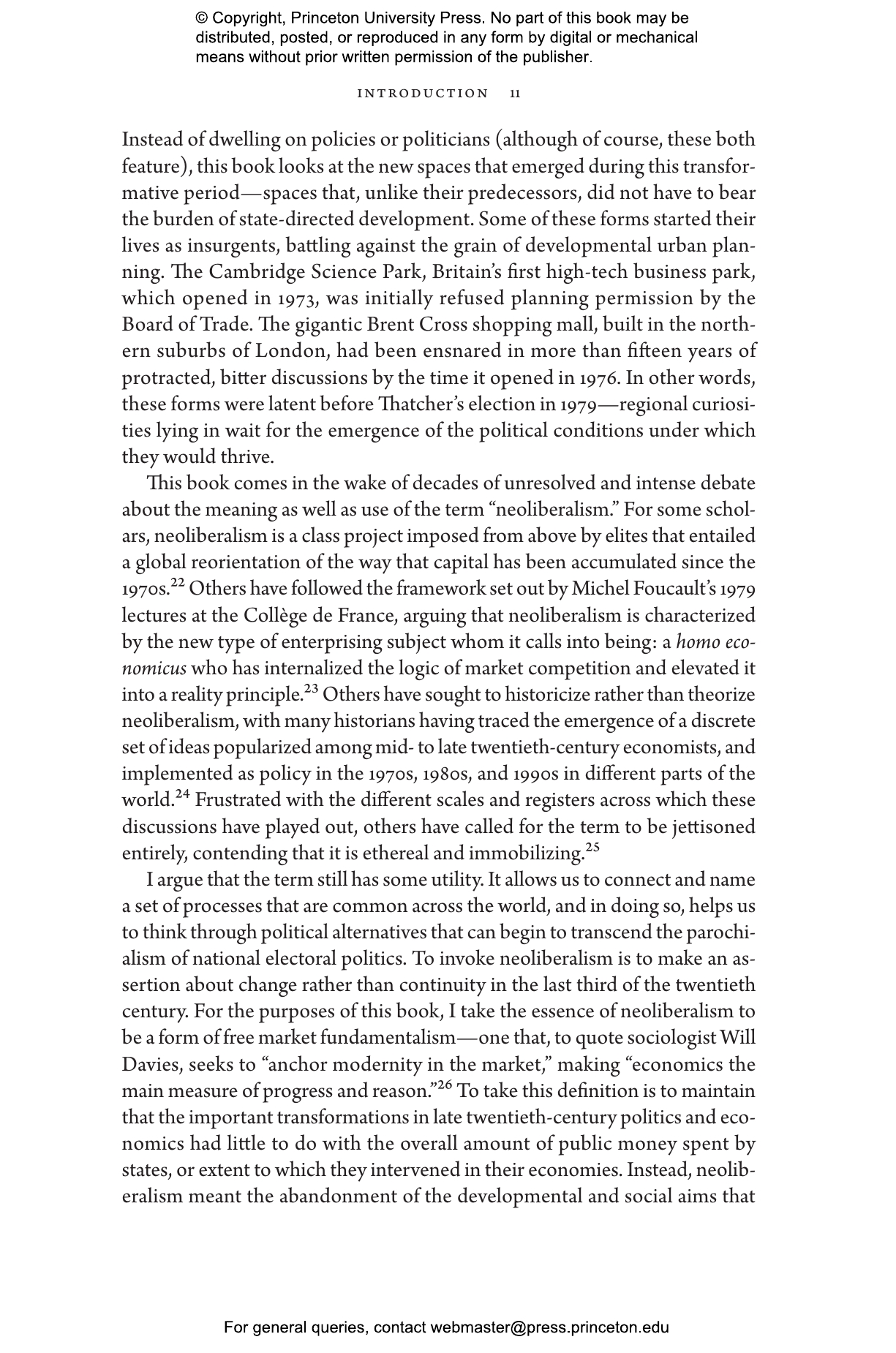 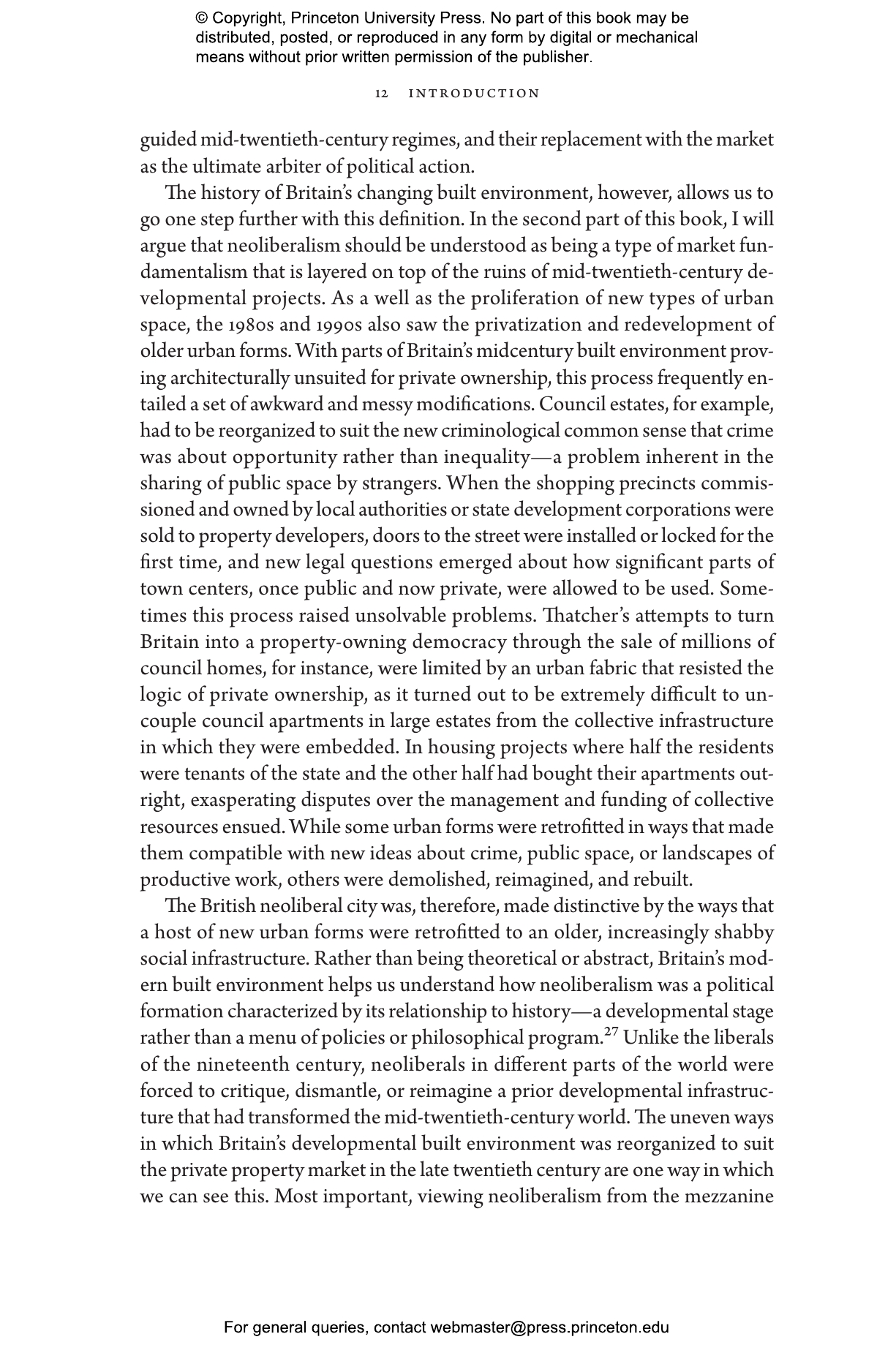 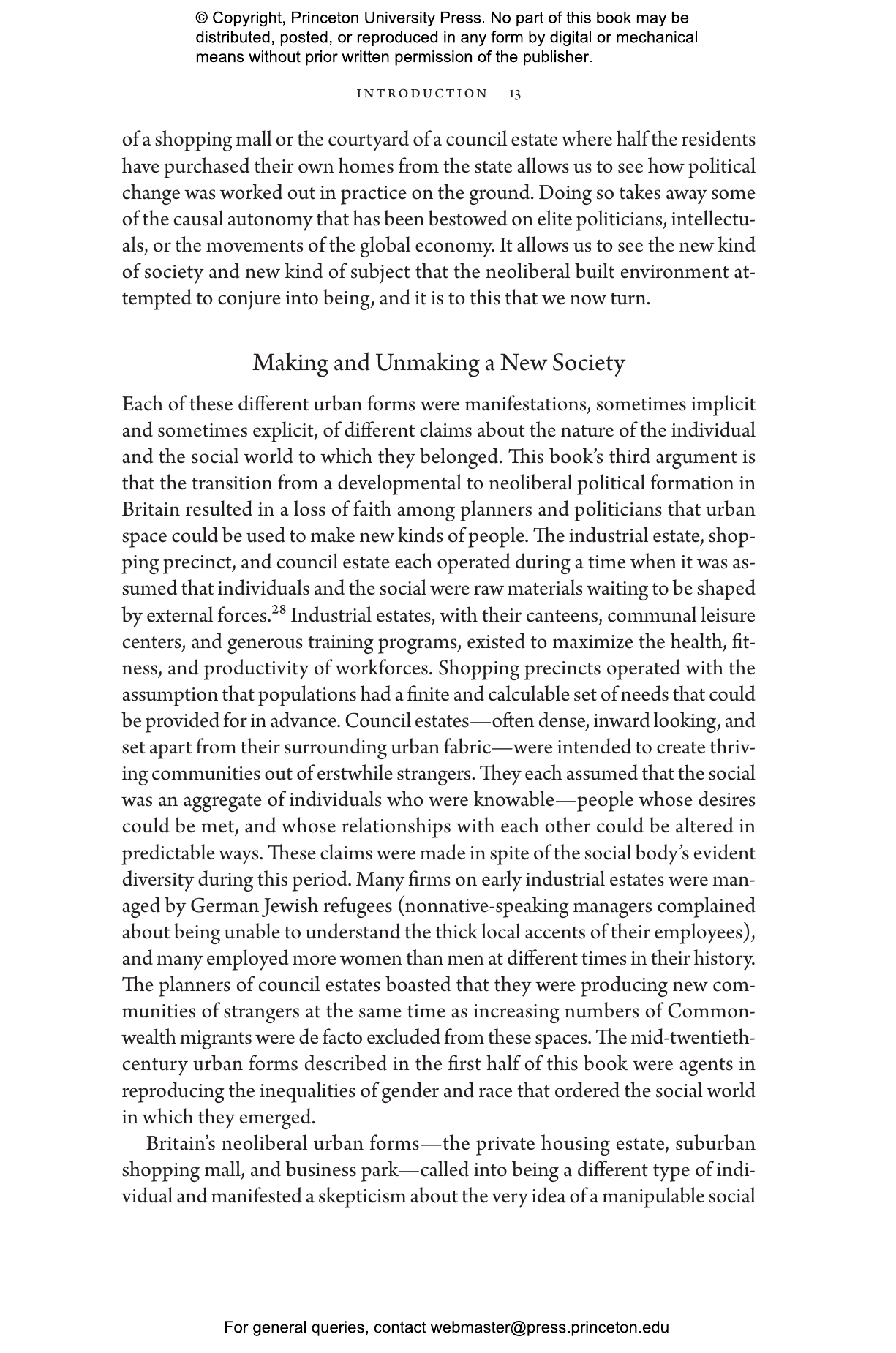 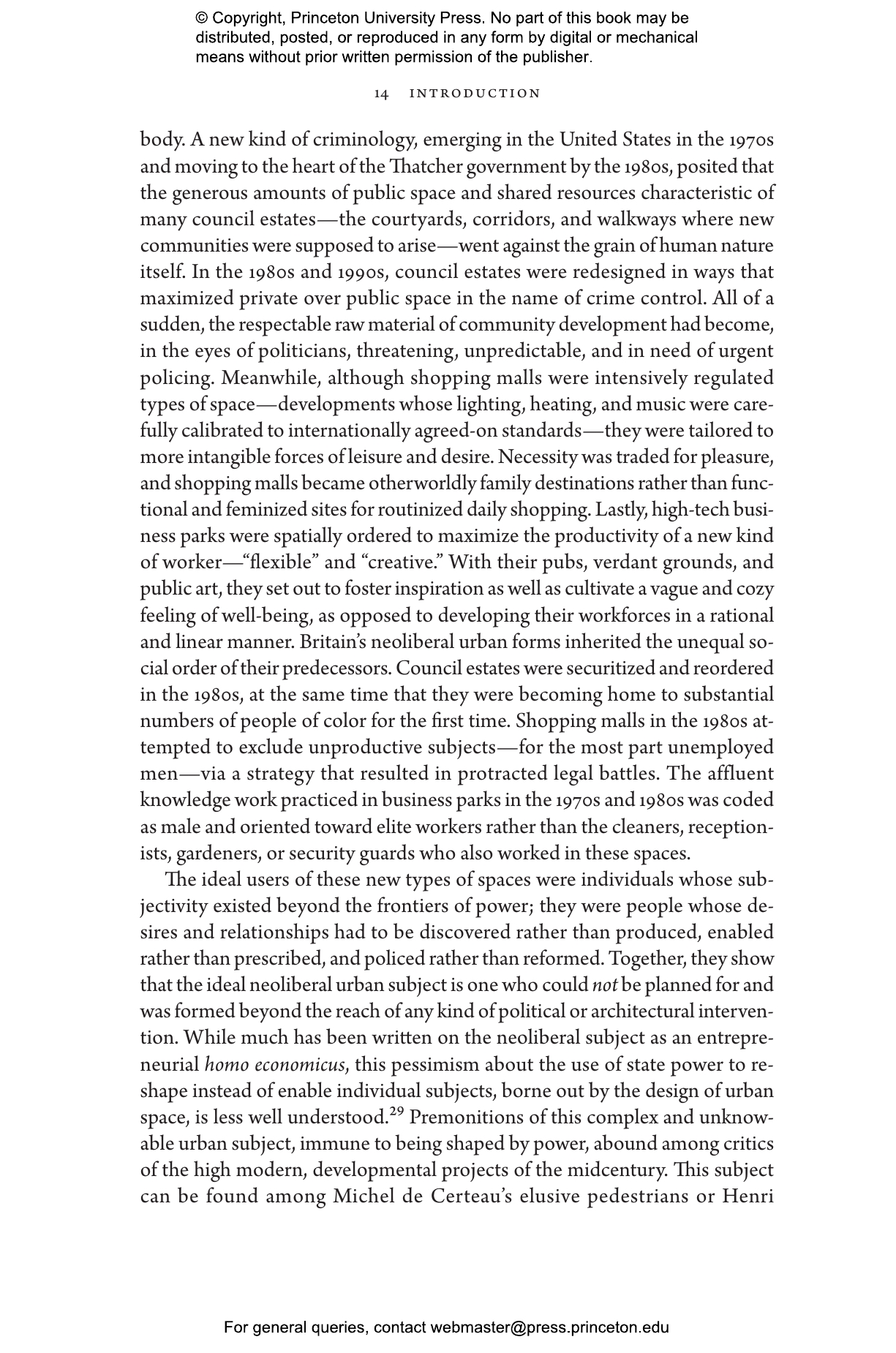 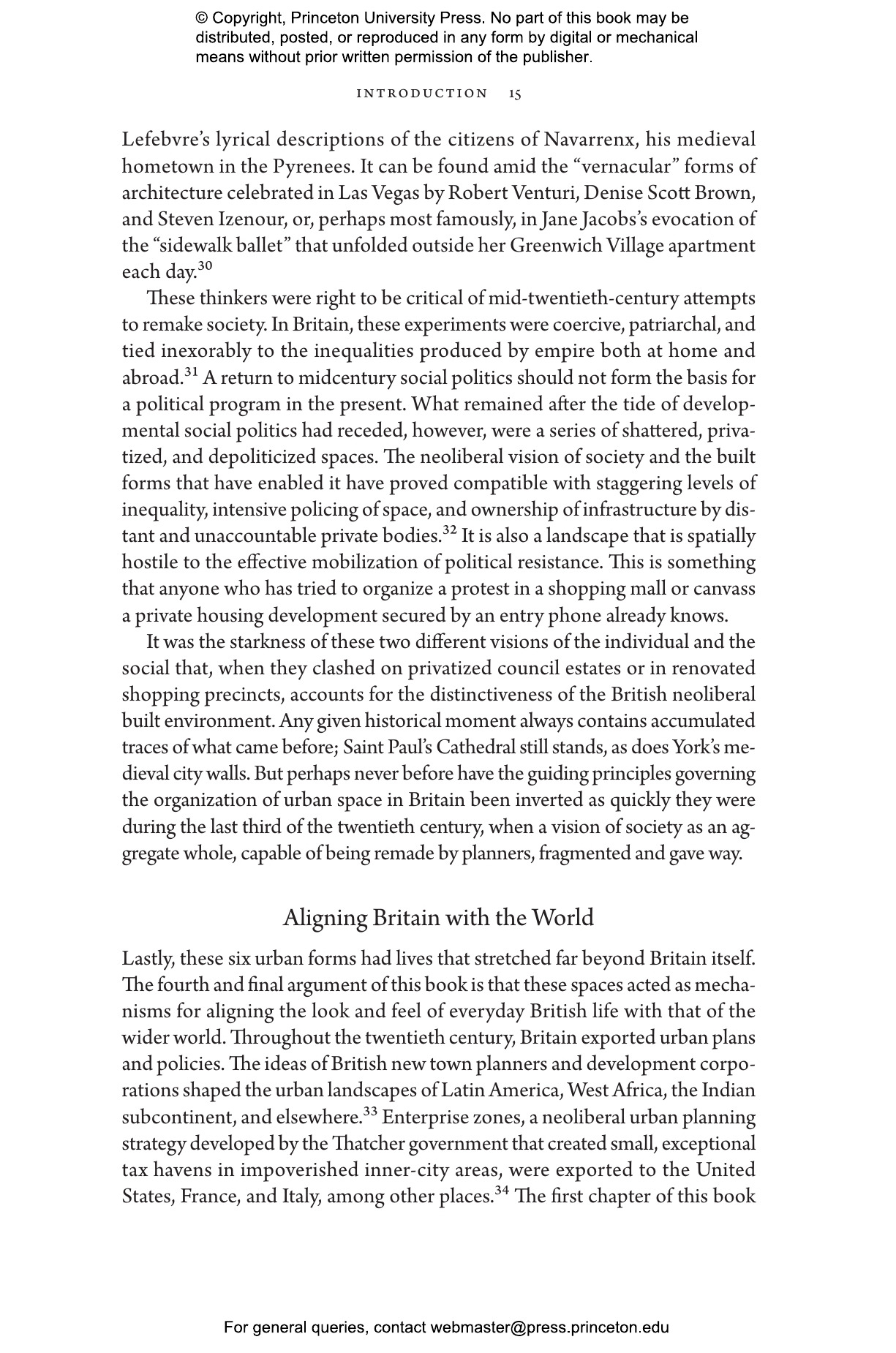 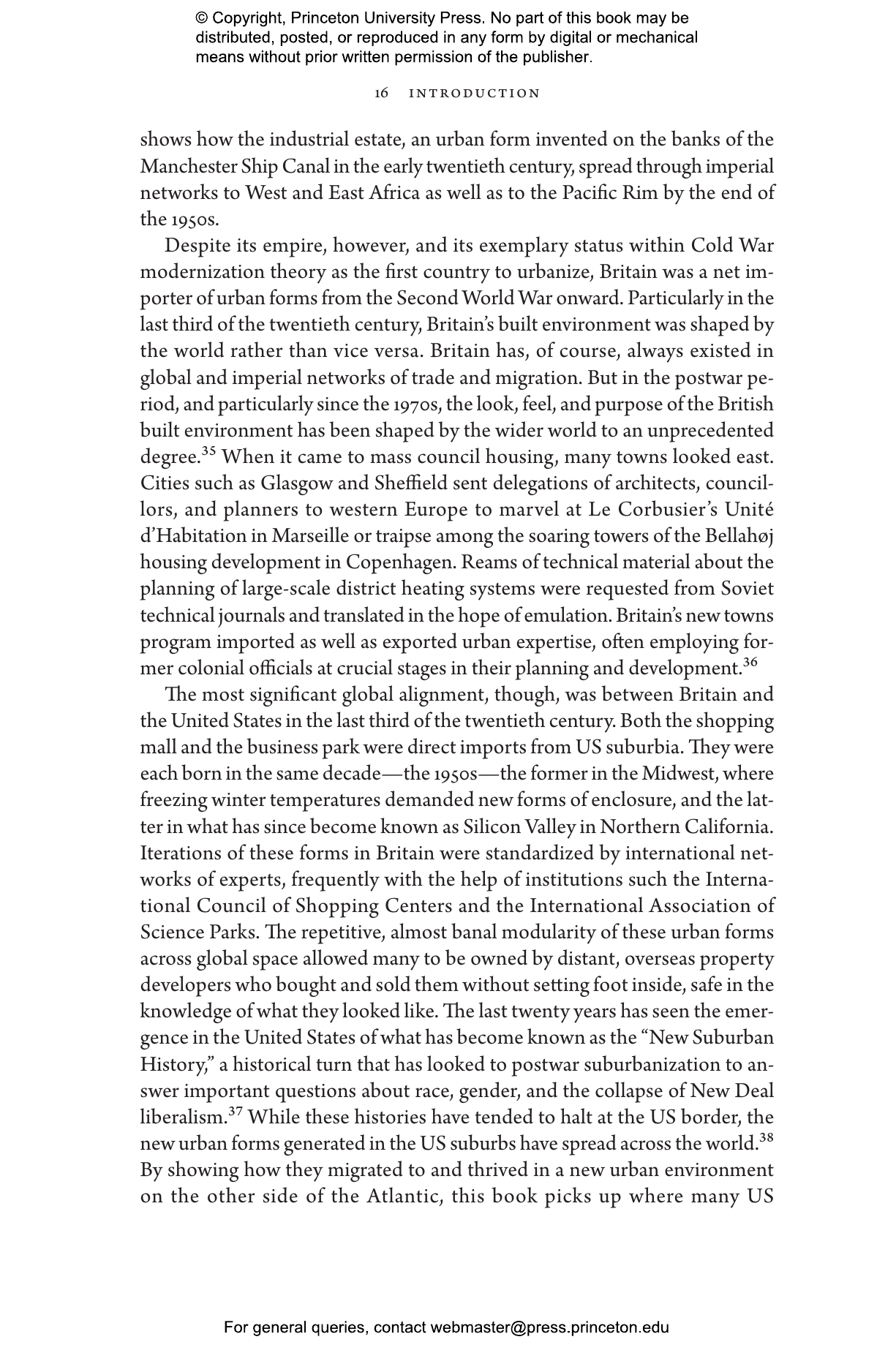 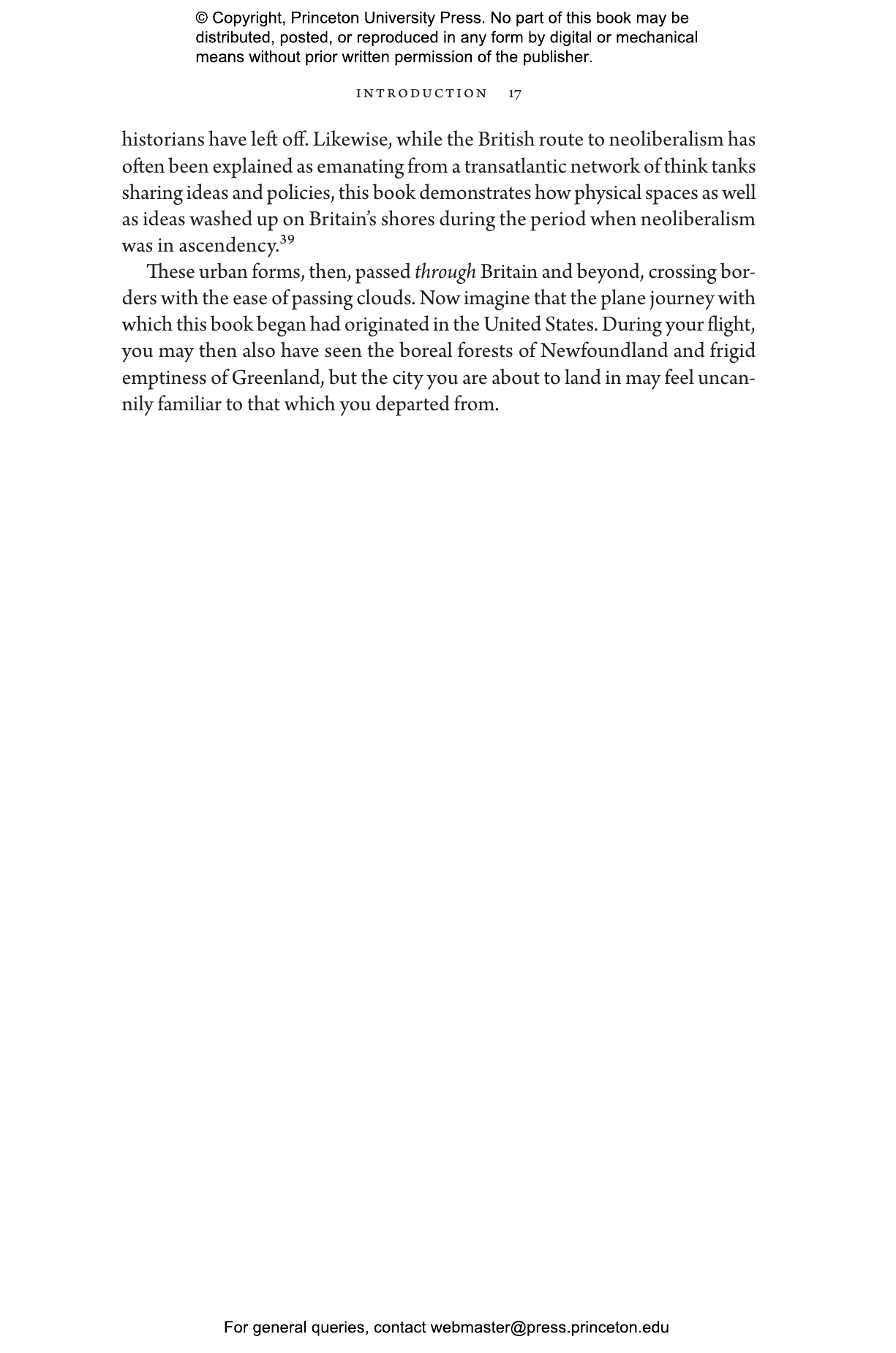 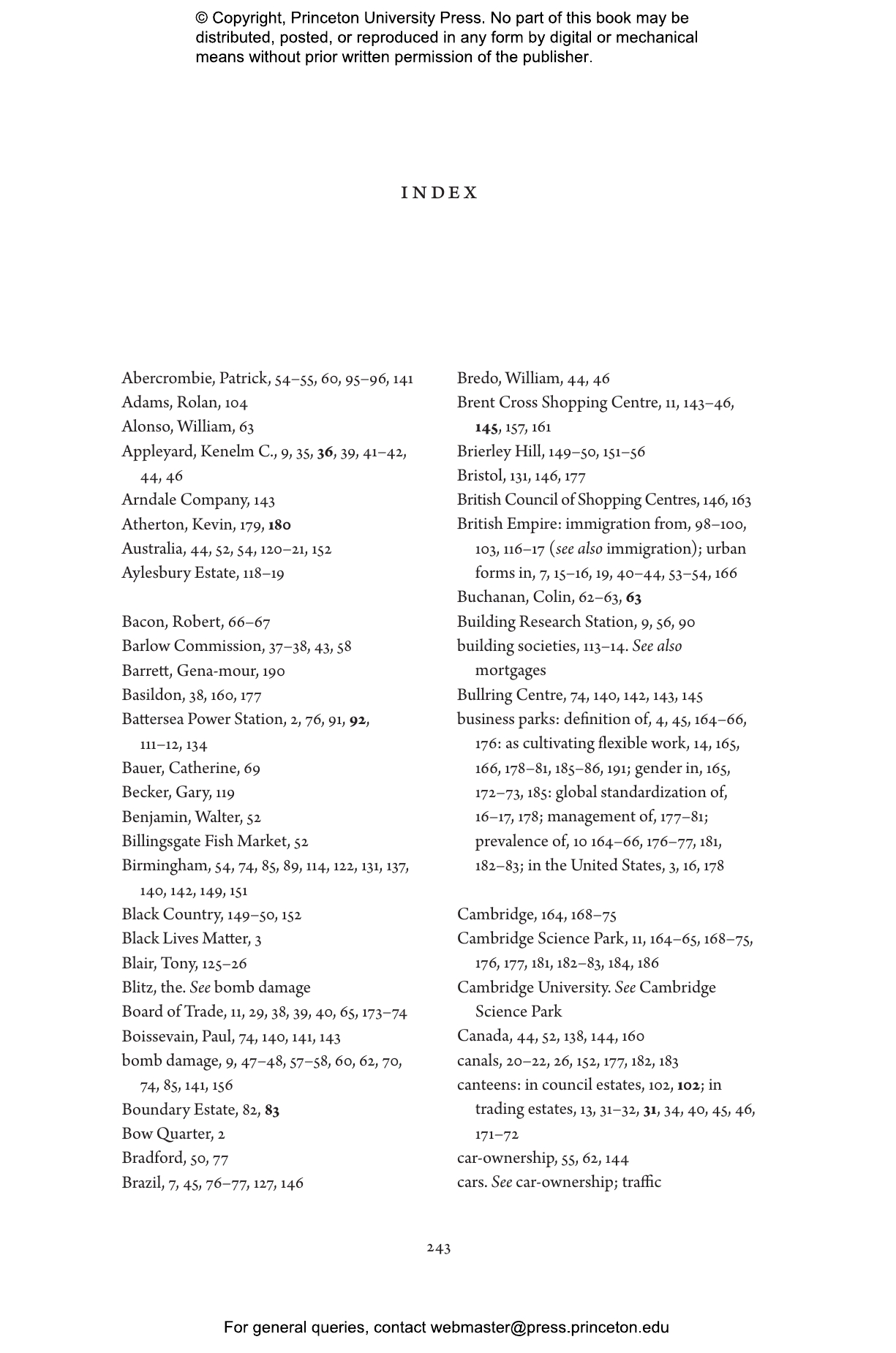 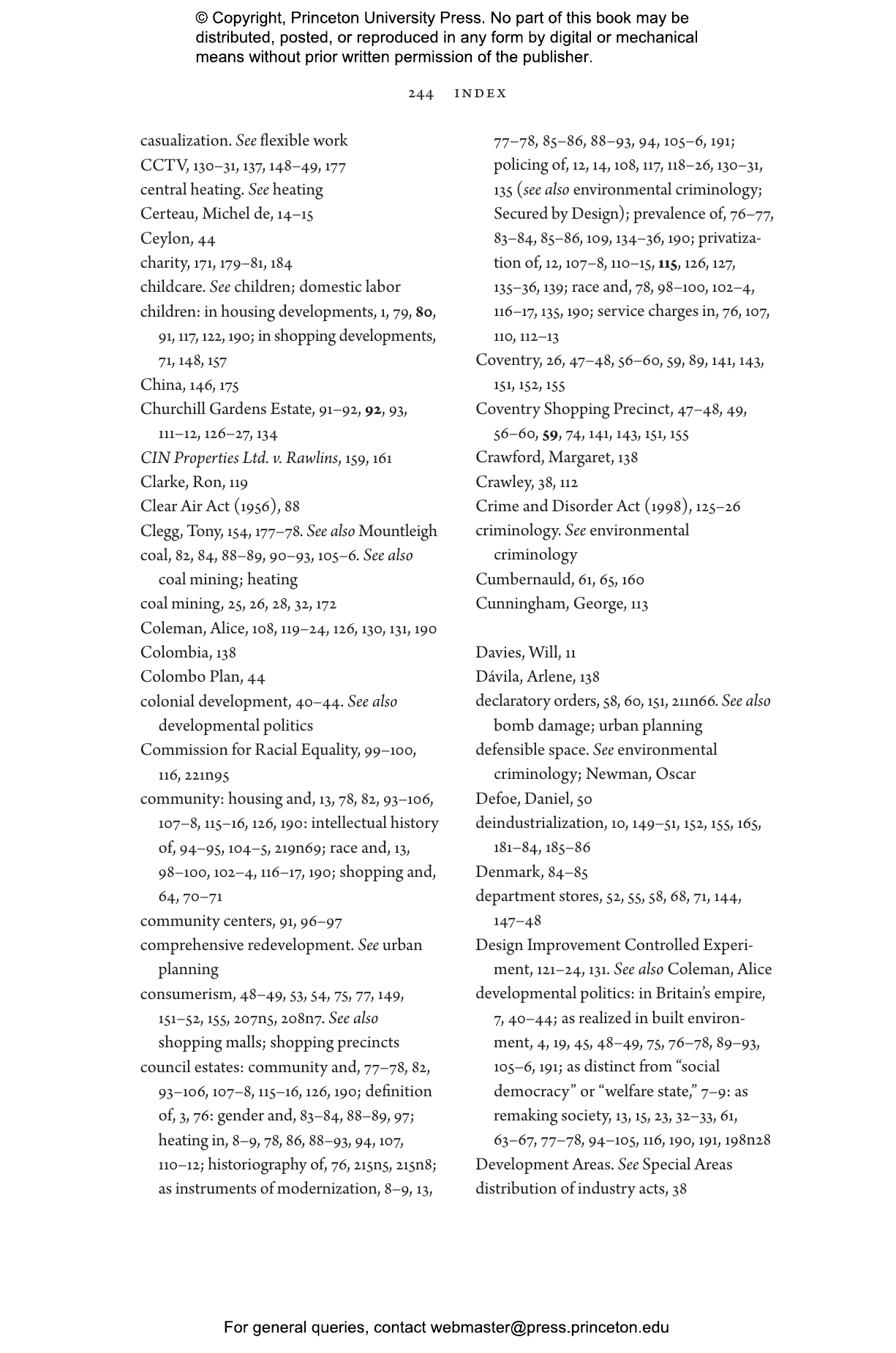 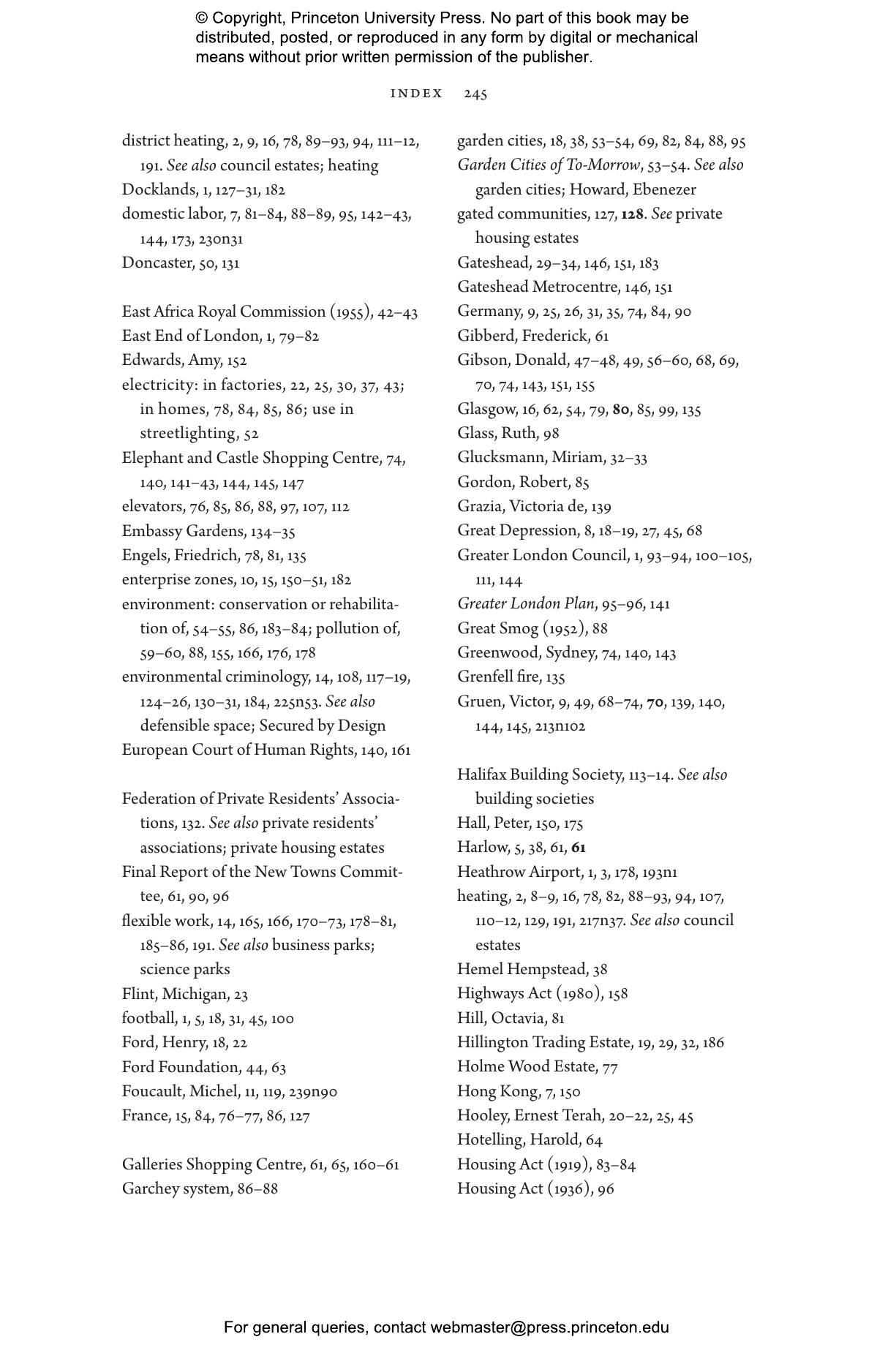 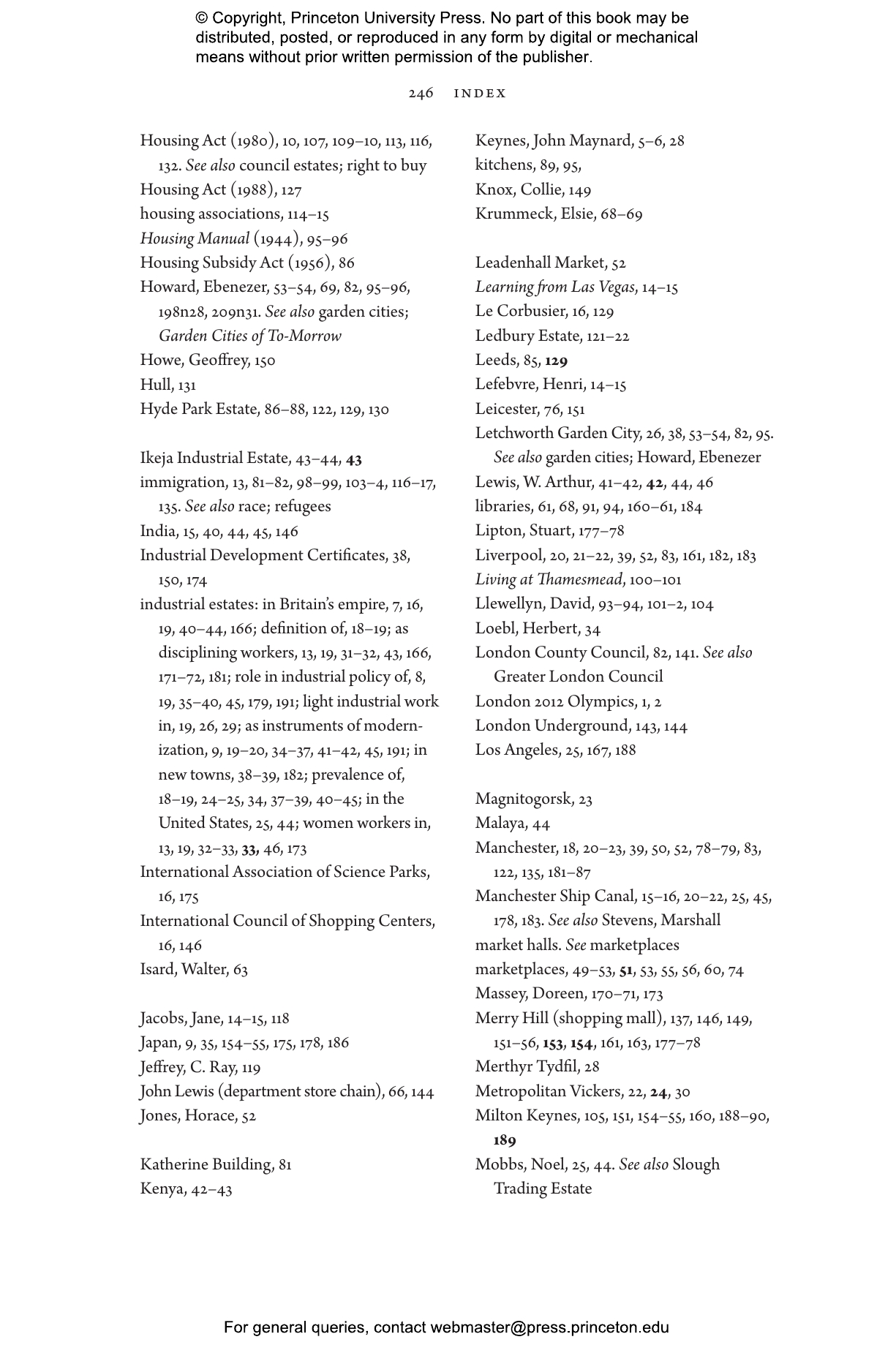 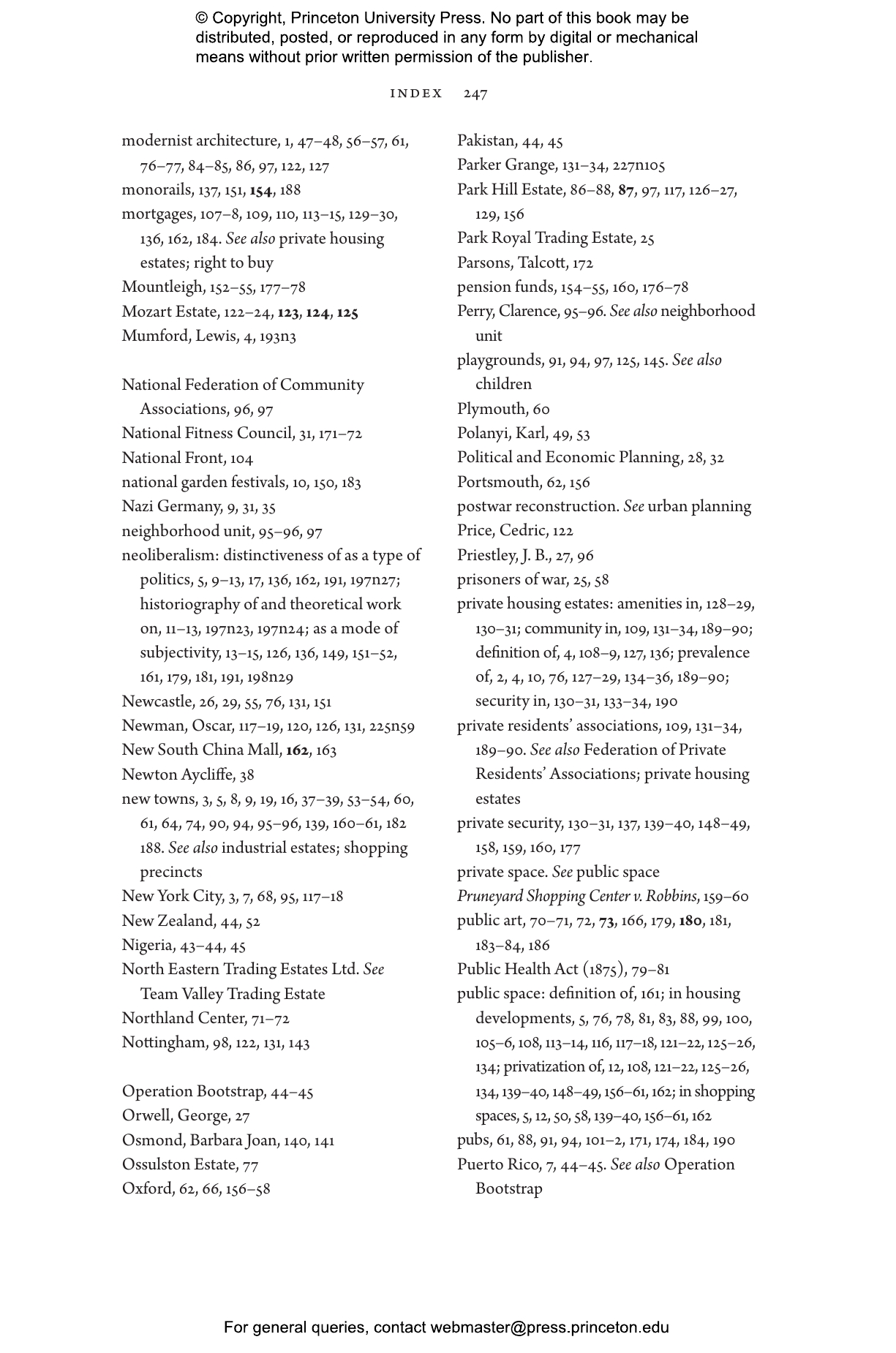 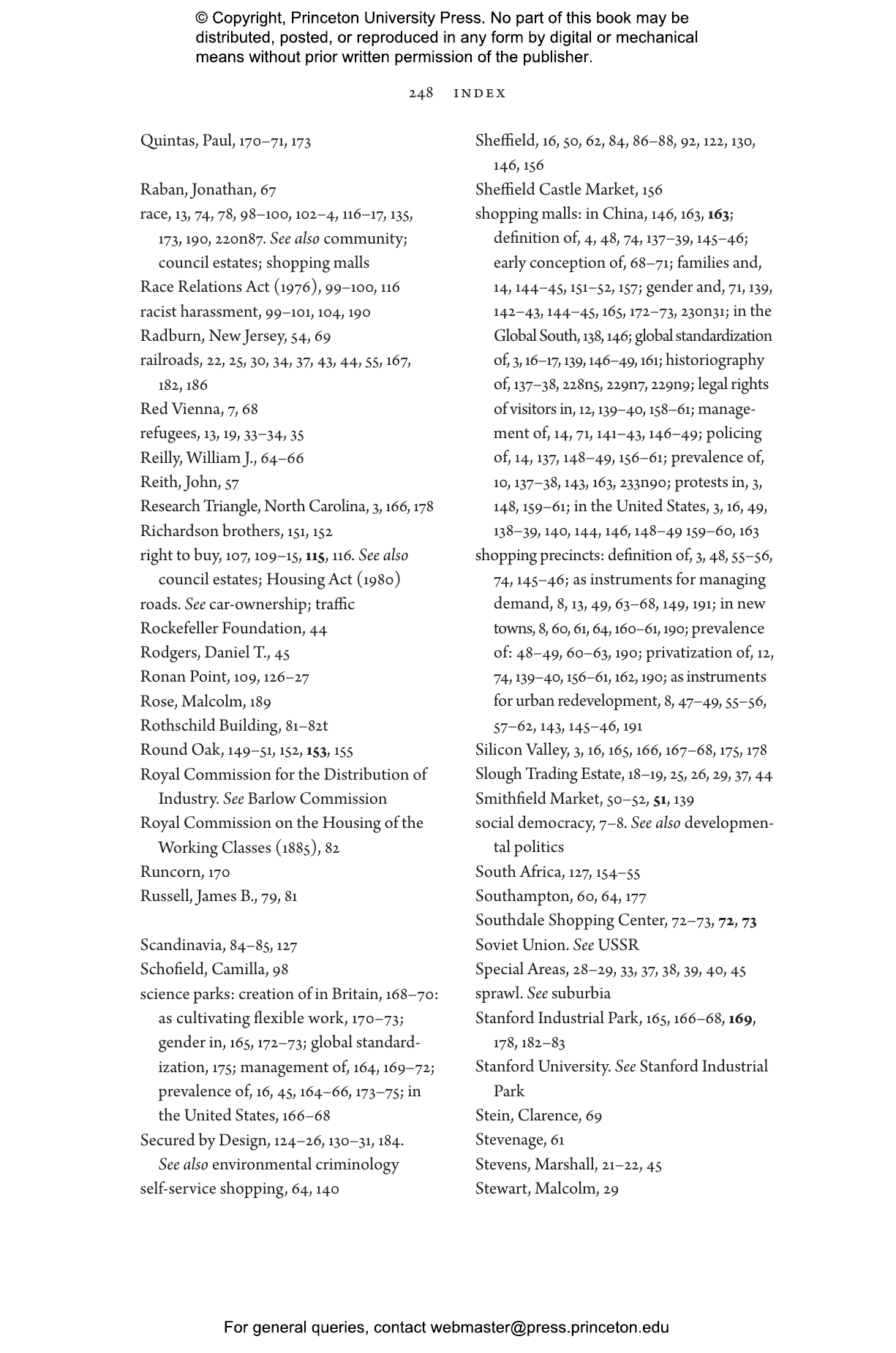 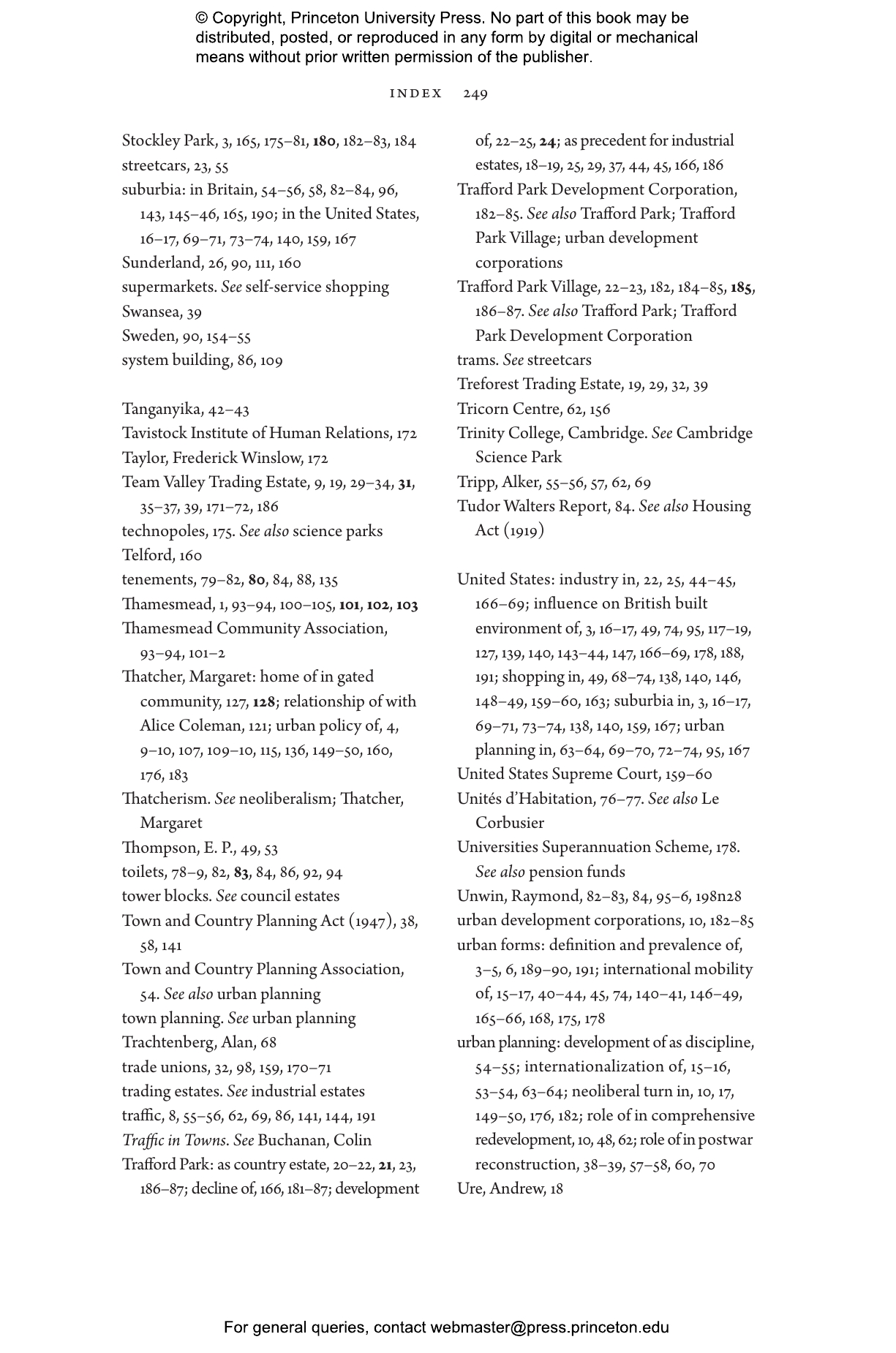 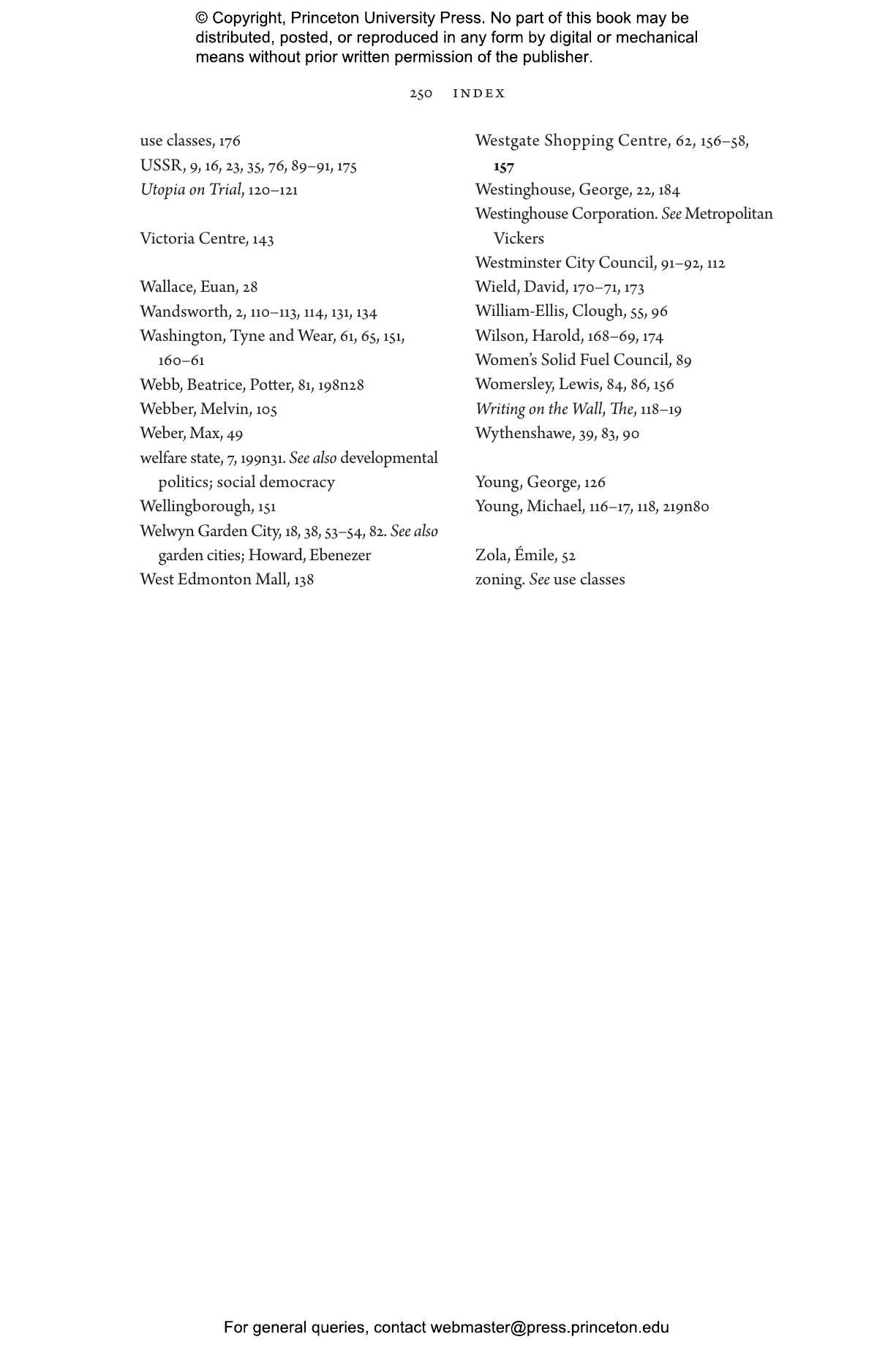 An urban history of modern Britain, and how the built environment shaped the nation’s politics 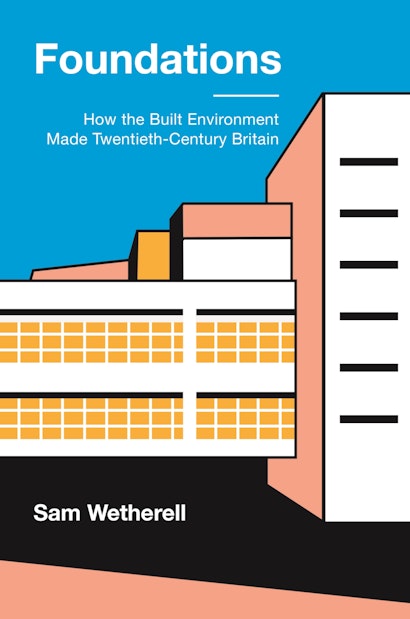 From the mid-twentieth century, spectacular new types of urban space were created in order to help remake Britain’s economy and society. Government-financed industrial estates laid down infrastructure to entice footloose capitalists to move to depressed regions of the country. Shopping precincts allowed politicians to plan precisely for postwar consumer demand. Public housing modernized domestic life and attempted to create new communities out of erstwhile strangers. In the latter part of the twentieth century many of these spaces were privatized and reimagined as their developmental aims were abandoned. Industrial estates became suburban business parks. State-owned shopping precincts became private shopping malls. The council estate was securitized and enclosed. New types of urban space were imported from American suburbia, and planners and politicians became increasingly skeptical that the built environment could remake society. With the midcentury built environment becoming obsolete, British neoliberalism emerged in tense negotiation with the awkward remains of built spaces that had to be navigated and remade.

Taking readers to almost every major British city as well as to places in the United States and Britain’s empire, Foundations highlights how some of the major transformations of twentieth-century British history were forged in the everyday spaces where people lived, worked, and shopped.

Sam Wetherell is lecturer in the history of Britain and the world at the University of York. Twitter @samwetherell

"[A] brilliant new history. . . . A highly convincing book, with the sort of clarity and panoramic scope that is too often, in books on this subject, lost in architectural and decorative minutiae."—Owen Hatherley, Tribune Magazine

"[A] scintillating and thoroughly engaging book, which rightly urges us to pay closer attention to the built environment in our understanding of how modern Britain came to be."—Phil Child, Journal of Contemporary History

"Engaging and erudite, Foundations looks at the evolution of the everyday, taken-for-granted places of modern Britain. With Sam Wetherell, we walk the corridors of shopping malls, drive past industrial parks, and explore high-rise housing developments from the ground up to a bird’s-eye view. More than just a history of architecture and planning, Foundations reflects on the public and private, the state and capital, and liberalism and neoliberalism, and in the process, links local and national histories to the global."—Thomas J. Sugrue, author of The Origins of the Urban Crisis

"British spaces for living, shopping, and working were thoroughly transformed from the 1930s to our day. In this trenchant analysis, Sam Wetherell probes how and why government-sponsored and socially inspired council estates, shopping precincts, and industrial estates turned into privatized and profit-oriented housing estates, suburban malls, and business parks. Foundations powerfully illuminates how the neoliberal revolution remade urban Britain."—Lizabeth Cohen, author of Saving America’s Cities

"With original materials and analysis, this exciting book makes a significant contribution to our understanding of the built environment in twentieth-century Britain and beyond. Foundations deserves the widest possible audience—not only among British historians, but also among all those interested in the ways that we are shaped by the sites in which we live. It will bring new readers into the orbit of British history."—Jordanna Bailkin, University of Washington

"This ambitious book is a major achievement, one that will speak widely to historians of urbanism, neoliberalism, and modern Britain. In its range and novelty, Foundations will help to define the parameters of urban history."—Guy Ortolano, New York University and author of Thatcher's Progress