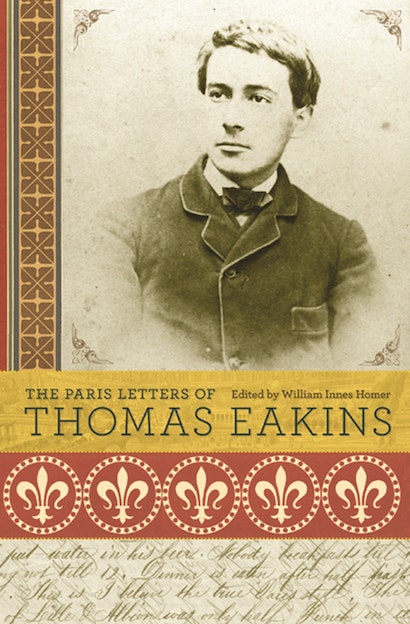 The most revealing and interesting writings of American artist Thomas Eakins are the letters he sent to family and friends while he was a student in Paris between 1866 and 1870. This book presents all these letters in their entirety for the first time; in fact, this is the first edition of Eakins’s correspondence from the period. Edited and annotated by Eakins authority William Innes Homer, this book provides a treasure trove of new information, revealing previously hidden facets of Eakins’s personality, providing a much richer picture of his artistic development, and casting fresh light on his debated psychosexual makeup. The book is illustrated with the small, gemlike drawings Eakins included in his correspondence, as well as photographs and paintings.

In these letters, Eakins speaks openly and frankly about human relationships, male companionship, marriage, and women. In vivid, charming, and sometimes comic detail, he describes his impressions of Paris — from the training he received in the studio of Jean-Léon Gérôme to the museums, concerts, and popular entertainments that captured his imagination. And he discusses with great insight contemporary aesthetic and scientific theories, as well as such unexpected subjects as language structure, musical composition, and ice-skating technique. Also published here for the first time are the letters and notebook Eakins wrote in Spain following his Paris sojourn.

This long-overdue volume provides an indispensable portrait of a great American artist as a young man.

William Innes Homer is H. Rodney Sharp Professor Emeritus of Art History at the University of Delaware. His many books include Thomas Eakins: His Life and Art (Abbeville), Stieglitz and the Photo-Secession, 1902 (Viking Studio), and Alfred Stieglitz and the American Avant-Garde (Little, Brown).

"Although there are a number of excellent biographies, critical works, and published collections of the work of seminal American artist Thomas Eakins, this is the first collection of his letters from his years as a student in Paris (1866-70). . . . Highly recommended for scholars and art history students as well as general readers and young adults."—Library Journal

"Homer has been writing and lecturing about Eakins for 40 years, and his familiarity adds much to his annotations of these letters; he captures their essence even in the briefest synopses. Homer's second volume, collecting later Eakins letters, should continue to present this lucid perspective and, more important, promises further firsthand insights."—Edith Newhall, ArtNews

"William Homer's edition of Thomas Eakins's Paris letters is a welcome contribution to the literature on (and by) one of our greatest painters. Nothing could be more impressive than the sheer imaginative and intellectual energy—also the constant good humor—with which the young Eakins meets the challenge waiting for him in Gérôme's studio as he takes the first crucial steps toward mastering the art of painting. More than ever, all admirers of Eakins's art are in Homer's debt."—Michael Fried, author of Why Photography Matters as Art as Never Before

"This invaluable book at last makes widely available the young Thomas Eakins's extensive correspondence from his years of study in Paris. Longtime Eakins biographer William Homer has edited these letters with illuminating insight and contextual information. Both the artist's own observations and the attendant commentary are likely to be indispensible for all future Eakins publications."—John Wilmerding, professor emeritus of American art, Princeton University

"Long awaited, this valuable collection of letters presents Thomas Eakins in his own words at a formative stage of his career, offering a fascinating record of triumphs and struggles as well as a lively display of the skills, interests, confident opinions, and complex personality of a great American artist."—Kathleen A. Foster, author of Thomas Eakins Rediscovered

"These letters give a fuller view of Thomas Eakins during his formative years as a student in Europe than we have ever had—his developing artistic understanding, his psychological drives, his friendships, his peculiarities and obsessions, and his views about Paris, its culture, and the works of art he saw while living there. This book makes a major contribution."—Elizabeth Johns, author of Thomas Eakins: The Heroism of Modern Life

"This invaluable book provides a useful and entertaining account of the early life and thoughts of one of nineteenth-century America's most significant artists. The hundreds of Eakins's letters gathered here contain a wealth of information about his youthful thought processes, opinions, and artistic development."—Martin A. Berger, author of Man Made: Thomas Eakins and the Construction of Gilded Age Manhood