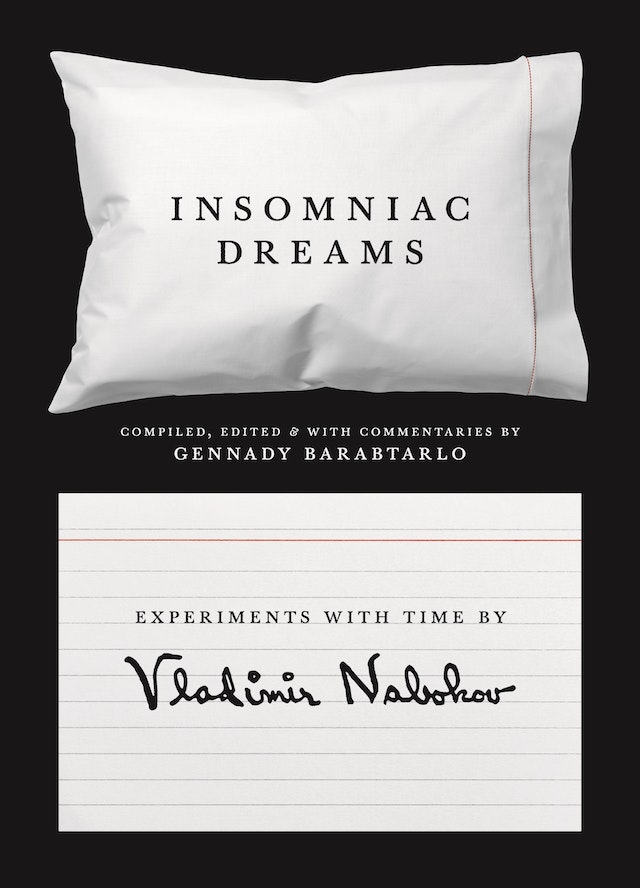 On October 14, 1964, Vladimir Nabokov, a lifelong insomniac, began a curious experiment. Over the next eighty days, immediately upon waking, he wrote down his dreams, following the instructions he found in An Experiment with Time by the British philosopher John Dunne. The purpose was to test the theory that time may go in reverse, so that, paradoxically, a later event may generate an earlier dream. The result—published here for the first time—is a fascinating diary in which Nabokov recorded sixty-four dreams (and subsequent daytime episodes) on 118 index cards, which afford a rare glimpse of the artist at his most private. More than an odd biographical footnote, the experiment grew out of Nabokov’s passionate interest in the mystery of time, which influenced many of his novels, including the late masterpiece Ada.

Insomniac Dreams, edited by leading Nabokov authority Gennady Barabtarlo, presents the text of Nabokov’s dream experiment, illustrated with a selection of his original index cards, and provides rich annotations and analysis that put them in the context of his life and writings. The book also includes previously unpublished records of Nabokov’s dreams from his letters and notebooks and shows important connections between his fiction and private writings on dreams and time.

Vladimir Nabokov was born in St. Petersburg, Russia, in 1899. After studying French and Russian literature at Trinity College, Cambridge, he launched his literary career in Berlin and Paris, writing innovative fiction, verse, and drama in his native Russian. In 1940 he moved to America, where he wrote some of his greatest works, including Lolita (1955), Pnin (1957), and Pale Fire (1962). He died in Switzerland in 1977. Gennady Barabtarlo is professor of literature at the University of Missouri and the author of a number of books on Nabokov. Barabtarlo has also translated into Russian three of Nabokov’s novels and all of his English-language short stories. He lives in Columbia, Missouri.

"A meditation on the ways our dreams unmoor us—from ourselves, from one another, from the most basic sense of duration."—Dan Piepenbring, The New Yorker

"This is a celebratory enterprise, an ideal present for readers who are already fans. . . . Barabtarlo has a masterly command of Nabokov’s life and work."—Eric Naiman, Times Literary Supplement

"[D]ream notes are at the heart of Insomniac Dreams, and are surrounded by helpful and intriguing background material."—Michael Wood, New York Review of Books

"Nabokov's actual accounts of his dreams . . . are fantastic, and show in raw form the wit, facility, and inherent discipline of language easily recognizable as Nabokov’s handiwork. The author’s fans will be fascinated by the obsessions, fears, preoccupations, and minutiae revealed without filter or guard. . . . The note cards alone . . . will fortify Nabokov scholars for years to come."—Publishers Weekly

"[T]he volume’s foray into the subconscious is a suggestive . . . addition to the canon of Nabokoviana.”"—Francisco Unger, Essays in Criticism

"For the casual reader drawn to big ideas, Insomniac Dreams can be as challenging as trying to reconstruct a dinosaur skeleton from a few simple bones. But it's a fascinating read for all the questions it raises—some of which the world's best minds have been tackling for centuries."—James Plath, PopMatters

"Insomniac Dreams voices [Nabokov’s] ongoing translation, rereading and appraisal of his past selves during his lifetime, as well as his assured awareness of the reader’s voracious desire to sift through the detritus of his words and thoughts."—Melissa Purkiss, Oxonian Review

"Nabokov's amazing records of his dreams are priceless, and their publication will create a much-deserved critical buzz. They show Nabokov at his most vulnerable, raw, and genuine, giving us rare glimpses into his past, his feelings about his parents, his relationship with his wife and son, and his anxieties and hopes. This is a very important book."—Galya Diment, University of Washington

"Nabokov's notes about his dream experiment offer a private, unguarded view into his inner life during the rich autumn of his genius. By revealing a new facet of Nabokov's fascination with the nature of time and the otherworld, they show his remarkable openness to radical ways of thinking. Gennady Barabtarlo's masterful analysis of Nabokov's notes does full justice to this important contribution to the study of one of the twentieth century's most important writers."—Dana Dragunoiu, Carleton University