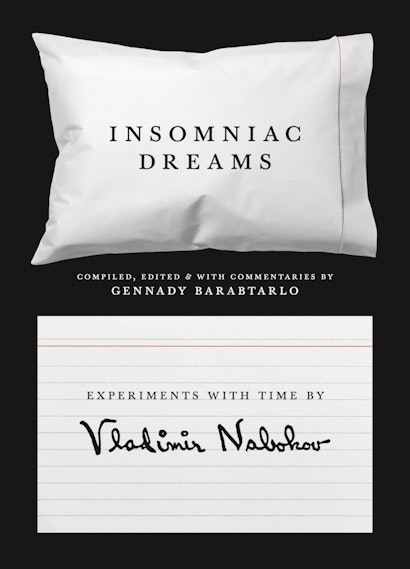 On October 14, 1964, Vladimir Nabokov, a lifelong insomniac, began a curious experiment. Over the next eighty days, immediately upon waking, he wrote down his dreams, following the instructions in An Experiment with Time by British philosopher John Dunne. The purpose was to test the theory that time may go in reverse, so that a later event may generate an earlier dream. The result—published here for the first time—is a fascinating diary in which Nabokov recorded sixty-four dreams (and subsequent daytime episodes) on 118 index cards, providing a rare glimpse of the artist at his most private. Insomniac Dreams presents the text of Nabokov’s dream experiment, illustrated with a selection of his original index cards, and provides rich annotations and analysis that put them in the context of his life and writings.

Vladimir Nabokov (1899–1977) was a Russian-American writer whose books include the novels Lolita, Pnin, Pale Fire, and Ada. Gennady Barabtarlo (1949–2019) was professor of literature at the University of Missouri and the author of a number of books on Nabokov.

"Handsomely designed . . . . [F]ull of the kind of sleep-deprived, iridescently edged complexity that likes to gather around Vladimir Nabokov's work."—Nicholson Baker, The New Republic

"Dream notes are at the heart of Insomniac Dreams, and are surrounded by helpful and intriguing background material."—Michael Wood, The New York Review of Books