A groundbreaking account of the meaning of abstract painting 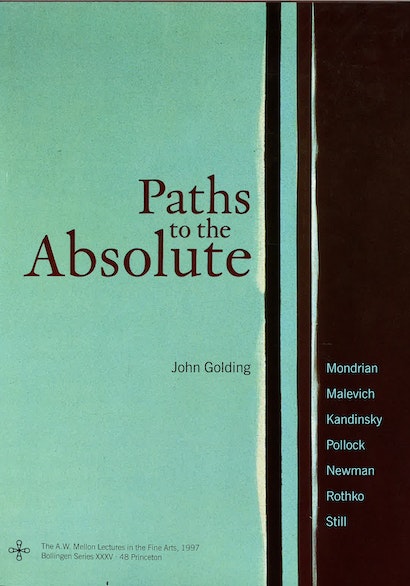 From Mondrian’s bold geometric forms to Kandinsky’s use of symbols to Pollock’s “dripped paintings,” the richly diverse movement of abstract painting challenges anyone trying to make sense of either individual works or the phenomenon as a whole. Applying his insights as an art historian and a painter, John Golding offers a unique approach to understanding the evolution of abstractionism by looking at the personal artistic development of seven of its greatest practitioners. He re-creates the journey undertaken by each painter in his move from representational art to the abstract—a journey that in most cases began with cubism but led variously to symbolism, futurism, surrealism, theosophy, anthropology, Jungian analysis, and beyond. For each artist, spiritual quest and artistic experimentation became inseparable. And despite their different techniques and philosophies, these artists shared one goal: to break a path to a new, ultimate pictorial truth.

The book first explores the works and concerns of three pioneering European abstract painters—Mondrian, Malevich, Kandinsky—and then those of their American successors—Pollock, Newman, Rothko, and Still. Golding shows how each painter sought to see the world and communicate his vision in the purest or most expressive form possible. For example, Mondrian found his way into abstraction through a spiritual response to the landscape of his native Holland, Malevich through his apprehension of the human body, Kandinsky through a blend of religious mysticism and symbolism. Line and color became the focus for many of their creative endeavors. In the 1940s and 50s, the Americans raised the level of pictorial innovation, beginning most notably with Pollock and his Jung-inspired concept of action.

Golding makes a powerful case that at its best and most profound, abstract painting is heavily imbued with meaning and content. Through a blend of biography, art analysis, and cultural history, Paths to the Absolute offers remarkable insights into how a sense of purpose is achieved in painting, and how abstractionism engaged with the intellectual currents of its time.

John Golding (1929–2012) was a distinguished art historian, art critic, curator, and painter. He was a lecturer and reader in the history of art at the Courtauld Institute; a senior tutor at the Royal College of Art, London; and Slade Professor of Fine Arts at the University of Cambridge. His history of cubism published in 1959 remains a standard work on the subject. His other books include Braque: The Late Works, Picasso: Sculptor/Painter, and Visions of the Modern.

"The restraint, subtlety, and intellectual rigor of John Golding's Paths to the Absolute . . . are especially timely."—New York Review of Books

"The skill of Golding's style is that it draws together considerations of art-historical significance, aesthetic value . . . and personal opinion into a provocative amalgam."—Matthew Reynolds, Times Literary Supplement

"[Golding] argues that the best abstract art is about something and that its meaning comes partly from the artist. The modernists he discusses were drenched in ideas, especially of better or hidden worlds."—The Economist

"John Golding beautifully handles the thorniest of subjects. . . . It is the extraordinary rightness of the perceptions running throughout Paths to the Absolute which makes it finally so memorable."—David Anfam, Apollo

"Rigorous but approachable."—Michael McNay, The Guardian

"[A] sensitive survey of seven of art's most influential abstract painters."—The Sunday

"Whether writing of Mondrian's quest for the purity of art, Pollock's search for the symbol, or Rothko's abstract sublime, the author eloquently conveys the deep spiritual impulses of such art in vivid and learned analyses."—Virginia Quarterly Review

"Seldom has an art movement been so misunderstood, yet so instrumental in shaping the direction of art in so many ways. . . . Golding's excellent work brings the reader from an artistic cloud of unknowing into expert mode with beauty and precision."—Booklist