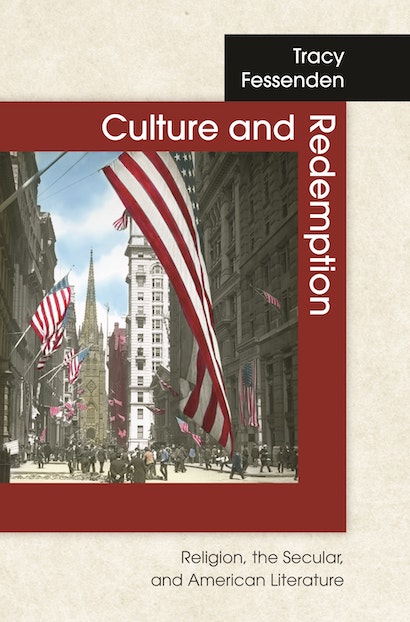 Many Americans wish to believe that the United States, founded in religious tolerance, has gradually and naturally established a secular public sphere that is equally tolerant of all religions — or none. Culture and Redemption suggests otherwise. Tracy Fessenden contends that the uneven separation of church and state in America, far from safeguarding an arena for democratic flourishing, has functioned instead to promote particular forms of religious possibility while containing, suppressing, or excluding others. At a moment when questions about the appropriate role of religion in public life have become trenchant as never before, Culture and Redemption radically challenges conventional depictions — celebratory or damning — of America’s “secular” public sphere.


Examining American legal cases, children’s books, sermons, and polemics together with popular and classic works of literature from the seventeenth to the twentieth centuries, Culture and Redemption shows how the vaunted secularization of American culture proceeds not as an inevitable by-product of modernity, but instead through concerted attempts to render dominant forms of Protestant identity continuous with democratic, civil identity. Fessenden shows this process to be thoroughly implicated, moreover, in practices of often-violent exclusion that go to the making of national culture: Indian removals, forced acculturations of religious and other minorities, internal and external colonizations, and exacting constructions of sex and gender. Her new readings of Emerson, Whitman, Melville, Stowe, Twain, Gilman, Fitzgerald, and others who address themselves to these dynamics in intricate and often unexpected ways advance a major reinterpretation of American writing.

Tracy Fessenden is Associate Professor of Religious Studies and Women's and Gender Studies at Arizona State University. She is the coeditor of The Puritan Origins of American Sex: Religion, Sexuality, and National Identity in American Literature.

"Interdisciplinary in its methods and broad in its reach, Culture and Redemption focuses on literary and non-literary texts drawn from three centuries of American history in order to follow the evolving fates of Protestantism in the national conversation."—James Emmett Ryan, Journal of American History

"Tracy Fessenden has written a provocative, learned, and timely study, one which is daring in its scope and complexity. It questions many of our most common assumptions about the relations between the secular and the religious in American life, and in so doing, helps us understand why we don't think twice when the band strikes up 'Glory, Glory, Hallelujah,' but probably should."—Tara Fitzpatrick, Journal of Law and Religion

"If by the end [of this book] you have not learned to read again (to think again) about such lofty suspects as democratization, feminization, and, yes, even that old warthog, secularization, then you have missed an opportunity to read, to read intensely, something that truly earns such reading. Fessenden's aesthetic agility offers literary enticement and intellectual transparency. . . . [The book] instructs through its readable prose and critical assimilations, allowing the reader to review the author's interpretations alongside their posited evidence. It is this textual transparence that makes Culture and Redemption not merely provocative, but also prescriptive."—Kathryn Lofton, Journal of the American Academy of Religion

"Fessenden's readings of religion challenge much critical complacency about race, gender, class, and ethnicity but at the same time never reduce religion to an epiphenomenon of these other categories. This is a book that absolutely must be read and contended with by all serious scholars of American culture."—Michael Kaufmann, American Literature

"A highly learned, intricately nuanced, and breathtakingly sweeping account of the role that religion has played in the culture of the United States from the early settlements of New England to the post-9/11 world of Guantanamo Bay and Abu Ghraib. . . . [T]o read this book closely is to find oneself shuttling back and forth between a sense of amazement at the power of its critical argument and one of astonishment at the brio of its interpretive aplomb. . . . [A]n elegant, intelligent book."—Roger Lundin, Religion and Literature

"A fascinating, wideranging study of the extent to which an ostensibly secular society in the United States is the product not of the successful separation of church and state but rather of the often troubling but pervasive imposition of a particular and often exclusionary Protestant notion of democratic identity. Fessenden maps out a cultural history in which religion does not disappear from life so much as disappear into it."—Nicolas S. Witschi, American Literary Scholarship

"Culture and Redemption offers a persuasive and much-needed explanation of how secularism has functioned and indeed continues to function in American society. Fessenden proposes that the narrative of secularism maintains such a stronghold on cultural and scholarly imaginaries that Americanists have been at a loss to explain the evangelical presence in politics or an American culture so seemingly bifurcated between religious conservatives and secular liberals.""—Sarah Rivett, Religion

"Using literature as a window into culture, Fessenden succeeds in provoking and invigorating rethinking of the never simple relationships among religion, race, secularism, and the contours of American Democracy."—Candy Gunther Brown, Church History

"A tour de force stretching from colonization to the 1920s, [this book] carefully balances overtly religious material with fictions whose theological valences are often overlooked. [It] is a comprehensive vision of just how deep the roots of US 'civil religion' go, a term coined by Robert Bellah in 1967, but here revealed as the culmination of a long-standing national binary not only between the religious and the secular but more specifically between Protestantism and anti-Protestantism."—Everett Hamner, Literature and Theology

"While the primary audience for this book is academic, Fessenden's insights have import for larger cultural discussions of religion's place in American life, a point she reinforces in her introduction, with some brief attention to the 'newly emboldened Christian right,' and in her coda in which she considers the future possibilities for religious dissent and the exportation through our foreign policy of essentially Protestant American values' that attempt 'to ensure religious freedom and eradicate conflict by confining religion to a privatized sphere.' Culture and Redemption is a book of moment, and readers will find Fessenden's treatment of secularism and American literature eye opening."—Jeffrey D. Groves, Journal of Church and State

"At a time when scholars, journalists, and the wider public are focusing their attention on the overt political and social 'intrusions' of religious groups into public and private life, Fessenden has unearthed a hidden history of powerful connections, transformations, and syntheses between the religious and the secular. In so doing, she opens a promising and suggestive agenda for American religious and literary scholarship."—W. Clark Gilpin, The Journal of Religion

"For many commentaries on American religion and politics, it is an axiom that the line that demarcates the religious from the secular is blurry. Many of these discussions presume that this normative and analytic blurriness comes with the difficulty of attaining neutrality on religious matters. Tracy Fessenden's Culture and Redemption advances a subtle and nuanced set of interpretations of secular tropes in American literature that offers a more complex take on what is at stake in the rhetoric of religious neutrality. In this collection of perceptive and insightful essays on subjects that range from the colonial period to the twentieth century, Fessenden does not propose a new way to clarify the boundaries between religion and the secular. Rather, she considers the institutional and discursive conditions under which it is useful for powerful groups to be able to identify certain beliefs, practices, and forms of identification as religiously neutral."—Finbarr Curtis, H-Net Reviews

"[A] clear and compelling overview. . . . [R]ich and provocative. . . . [F]orthrightly articulated. . . . [This is an] ambitious, eloquent, and engrossing study, one which should impel all Americanists to reconsider how they approach their field."—Farrell O'Gorman, Christianity and Literature

"[This is a book that] deserves a great deal of careful attention. . . . Since religion is again—if it ever ceased to be—one of the most difficult and important areas of cultural and political conflict, it is incumbent upon all of us to develop a politics and a cultural analysis sophisticated enough to engage this conflict anew. Fessenden's work is an important contribution to such an effort."—Peter Kerry Powers, Christian Scholar's Review

"[B]rilliant . . . the beginning of what promises to become a massive revision of those many canonical histories that have inadequately documented the twentieth-century's overwhelming debt to religion and its seemingly secular present."—Michael Lackey, Modern Fiction Studies

"Drawing on the methodologies of literary, cultural, and religious studies, while maintaining commendable sensitivity to historical context, Fessenden has written a fascinating meditation on the ways in which particular forms of Protestant thought have come to dominate, not just the religious culture of America, but also the tenor of American secularity. . . . This is an important and, in the best sense of the word, imaginative book."—Brian Ward, American Nineteenth Century History

"Culture and Redemption is a wonderfully refreshing book about anomalies of power among America's religions and cultures. Tracy Fessenden's expansive and often surprising readings demonstrate that strongly Protestant and broadly religious concerns persistently upended the seemingly natural triumph of secularism in America, with powerful effects on our literature and ethics alike. In short, a fascinating book."—Jon Butler, Yale University

"Tracy Fessenden's Culture and Redemption is an important work of scholarship. The book makes a compelling case for seeing particular forms of Protestant religion as an 'unmarked category' in American cultural analysis and urges a rethinking of some major works of American literature in relation to that category. The book is tightly argued, thoroughly researched, and consistently well written."—Lucy Maddox, Georgetown University