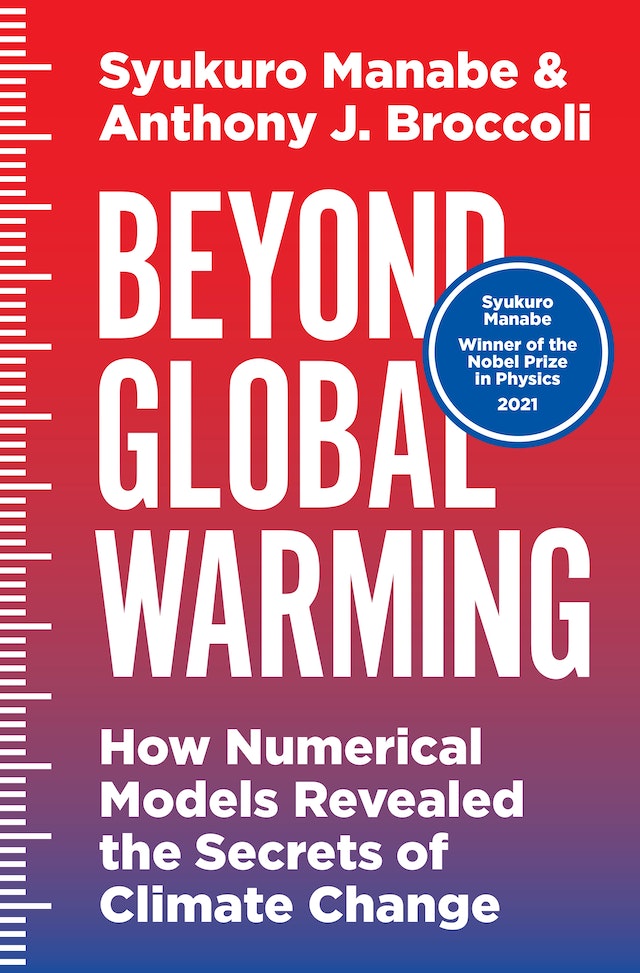 Syukuro Manabe is perhaps the leading pioneer of modern climate modeling. Beyond Global Warming is his compelling firsthand account of how the scientific community came to understand the human causes of climate change, and how numerical models using the world’s most powerful computers have been instrumental to these vital discoveries.

Joined by atmospheric scientist Anthony Broccoli, Manabe shows how climate models have been used as virtual laboratories for examining the complex planetary interactions of atmosphere, ocean, and land. Manabe and Broccoli use these studies as the basis for a broader discussion of human-induced global warming—and what the future may hold for a warming planet. They tell the stories of early trailblazers such as Svante Arrhenius, the legendary Swedish scientist who created the first climate model of Earth more than a century ago, and they provide rare insights into Manabe’s own groundbreaking work over the past five decades. Expertly walking readers through key breakthroughs, they explain why increasing atmospheric carbon dioxide has caused temperatures to rise in the troposphere yet fall in the stratosphere, why the warming of the planet’s surface differs by hemisphere, why drought is becoming more frequent in arid regions despite the global increase in precipitation, and much more.

Authoritative and illuminating, Beyond Global Warming is an invaluable insider’s look at some of today’s most cutting-edge Earth science, and a rare window into a brilliant scientific mind.

Syukuro Manabe is senior meteorologist in the Program in Atmospheric and Oceanic Sciences at Princeton University and a pioneer in the use of computers to simulate global climate change. Anthony J. Broccoli is professor of environmental sciences at Rutgers University.

"Useful and enlightening . . . . The knowledge derived from the model output is clear, detailed, and relevant to a better understanding of the climate system. The purpose of the book is to lead the reader down the path that Manabe and Broccoli have followed in their careers, showcasing the methods and motivation used in each study, and explaining and contextualising their findings. In each of these goals it succeeds admirably."—Eimear Dunne, Holocene

“Syukuro Manabe has been the driving force in almost every key development regarding our understanding of the problem of carbon dioxide and climate, from ice ages to anthropogenic global warming. Beyond Global Warming is an important book by one of the towering figures of the field.”—Raymond T. Pierrehumbert, author of Principles of Planetary Climate

“A valuable and well-written history of climate modeling.”—Dennis L. Hartmann, University of Washington

“Manabe is a god in the field of climate modeling and Broccoli is a demigod, and we are lucky to have a book on the topic by them.”—Matthew Huber, Purdue University