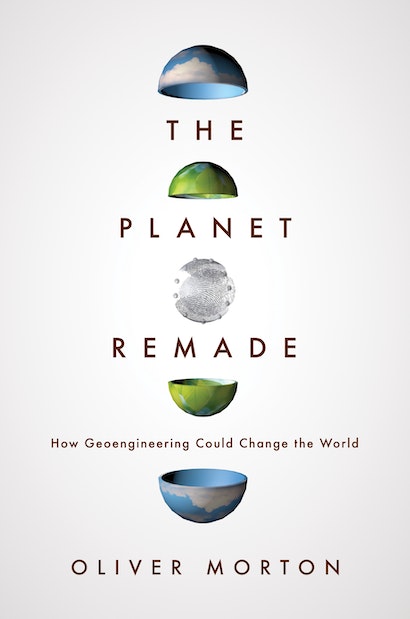 The risks of global warming are pressing and potentially vast. The difficulty of doing without fossil fuels is daunting, possibly even insurmountable. So there is an urgent need to rethink our responses to the crisis. To meet that need, a small but increasingly influential group of scientists is exploring proposals for planned human intervention in the climate system: a stratospheric veil against the sun, the cultivation of photosynthetic plankton, fleets of unmanned ships seeding the clouds. These are the technologies of geoengineering—and as Oliver Morton argues in this visionary book, it would be as irresponsible to ignore them as it would be foolish to see them as a simple solution to the problem.

The Planet Remade explores the history, politics, and cutting-edge science of geoengineering. Morton weighs both the promise and perils of these controversial strategies and puts them in the broadest possible context. The past century’s changes to the planet—to the clouds and the soils, to the winds and the seas, to the great cycles of nitrogen and carbon—have been far more profound than most of us realize. Appreciating those changes clarifies not just the scale of what needs to be done about global warming, but also our relationship to nature.

Climate change is not just one of the twenty-first century’s defining political challenges. Morton untangles the implications of our failure to meet the challenge of climate change and reintroduces the hope that we might. He addresses the deep fear that comes with seeing humans as a force of nature, and asks what it might mean—and what it might require of us—to try and use that force for good.

Oliver Morton is briefings editor at the Economist, and his writing has appeared in the New Yorker and other publications. He is the author of Eating the Sun: How Plants Power the Planet.

"Few science books are more important, timely, and beautifully written. . . . [The Planet Remade] is a book that lays out all the facts, with great clarity and at some length, draws a conclusion, but leaves you to make up your mind."—Cory Doctorow, Boing Boing

"[I]f you are going to read one book on climate engineering, it should be The Planet Remade. . . . [The book] is as much an exploration of science and engineering as it is of people and attitudes."—Jane C.S. Long, Nature

"Oliver Morton produced 2015's most important and insightful book about the environment in The Planet Remade. . . . Several people who should know better argued this year that humanity needs to adopt a more ‘religious' view of climate change. It does not. What it needs is books by Oliver Morton."—Richard Benson, The Independent

"Morton offers a calm, rational discussion of deliberate technological interventions to cool the planet's climate system. . . . An important account of cutting-edge research that will fascinate serious readers and demand the attention of policymakers."—Kirkus

"Morton accomplishes the difficult task of explaining high-level scientific concepts in pragmatic terms, with enough history, first-person reporting, anecdotes, and humor that The Planet Remade is as enjoyable to read as it is informative."—Foreword Reviews

"Through pages of rigorous scientific groundwork wrapped in elegant prose, Morton provides a guided tour of why we need geoengineering. . . . The Planet Remade is a delightful introduction to the seemingly absurd proposals that could be our fragile world's final hope."—Science News

"Morton affords us a fascinating look at the perils and promise of geoengineering on a warming planet."—Wan Lixin, Shanghai Daily

"[A] thoughtfully written and meticulously reported volume that explores the nascent and controversial field of deliberate technological interventions in the climate—interventions meant to cool the planet."—Pacific Standard

"Morton . . . critically evaluates the ethical and scientific pros and cons of using geoengineering to mitigate global climate change. He uses real and theoretical case studies to support his views of past, current, and potential geoengineering options. . . . A valuable resource for environmental science and environmental policy library collections."—Choice

"Journalist Oliver Morton has thought through the implications of [geoengineering] options, immersing himself in the detailed technical aspects of geoengineering for more than a decade. The result is The Planet Remade, the most comprehensive and readable popular account of geoengineering currently available. The content is well-informed and articulate; the prose is imaginative and poetic."—Callan Bentley, Earth Magazine

"One thing is clear: the world cannot ignore the solar geoengineering option. . . . It is time for a serious public debate. The Planet Remade is required reading for any such conversation."—Gernot Wagner, Ethics & International Affairs

"Oliver Morton displays here again the usual virtues of his writing, which include a sparkling clarity maintained even when conveying huge complex masses of information, often about topics new to all of us; and then, even more importantly, good judgment. He makes distinctions when evaluating gnarly problems, and explains the distinctions very persuasively, and with a generous dry wit. All these abilities are now devoted to perhaps the crucial question of our time, the climate, making this simply a Necessary Book, which is also a pleasure to read. Maybe that combination makes it sui generis, but in any case it's an important addition to current discourse, an excellent way to get oriented to our most pressing environmental problem, and I urge people to read it and ponder its news."—Kim Stanley Robinson, author of Red Mars and Aurora

"This is the first book to properly consider the dimensions of the new world we are living in. Morton's book is indispensable, highly readable, and incredibly timely."—Mark Lynas, author of The God Species

"A scholar and a fine literary stylist, Oliver Morton sets the geoengineering debate in a fascinating historical and social context. The Planet Remade is much the best book on the subject and deserves a wide readership."—Martin Rees, author of Our Final Century

"One of the most important and provocative books I've read in years. The Planet Remade is essential for policymakers, environmentalists, skeptics, and anyone else who prefers their views on climate change to be based on evidence rather than rhetoric."—Hari Kunzru, author of Gods without Men

"Written with the grace and clarity its subject demands, The Planet Remade offers just what the issue of climate change needs: fresh thinking about what can be done, based on deep respect for the planet, the science, and the concerns of people with differing points of view. It's an enriching addition to the literature of possible worlds."—Marek Kohn, author of A Reason for Everything and Turned Out Nice

"Deeply rooted in history and smartly optimistic about the future, this is—by far—the best book yet on geoengineering."—David Keith, Harvard University and author of A Case for Climate Engineering

"In Morton's new book, he takes on some of the most challenging issues of our age. It is a readable and thought-provoking look at humanity's dance with hubristic ideas and deeds regarding the manipulation of the environment on a planetary scale. He is clearly one of the best science writers of our day."—Steven Hamburg, Environmental Defense Fund

"Taking a sensible and low-key approach to a rather provocative subject, Morton shows why geoengineering is something that the mainstream will need to consider—it's not something just for the fringes."—Ken Caldeira, Carnegie Institution for Science

"Morton accessibly describes the potential and risks of geoengineering and puts them in the context of climate change and other large-scale interventions that humans have had on the earth system or might seek to have in the future."—Tim Kruger, University of Oxford

"Engaging, persuasive, and thought provoking. Morton discusses the potential role and consequences of geoengineering and puts forward his own carefully considered views on the subject. The Planet Remade is a tour de force of wide-ranging scholarship as well as a soundly argued polemic."—John Shepherd, University of Southampton