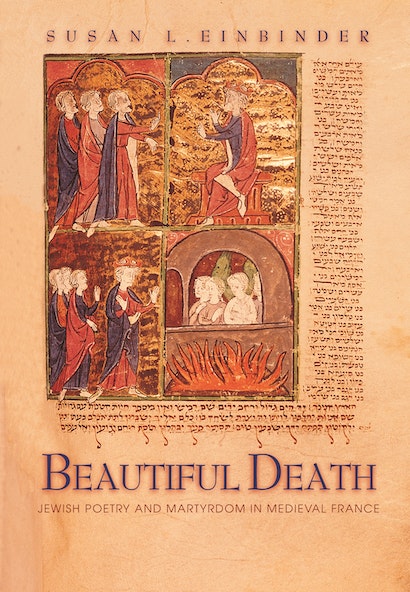 When Crusader armies on their way to the Holy Land attacked Jewish communities in the Rhine Valley, many Jews chose suicide over death at the hands of Christian mobs. With their defiant deaths, the medieval Jewish martyr was born. With the literary commemoration of the victims, Jewish martyrology followed. Beautiful Death examines the evolution of a long-neglected corpus of Hebrew poetry, the laments reflecting the specific conditions of Jewish life in northern France. The poems offer insight into everyday life and into the ways medieval French Jews responded to persecution. They also suggest that poetry was used to encourage resistance to intensifying pressures to convert.


The educated Jewish elite in northern France was highly acculturated. Their poetry — particularly that emerging from the innovative Tosafist schools — reflects their engagement with the vernacular renaissance unfolding around them, as well as conscious and unconscious absorption of Christian popular beliefs and hagiographical conventions. At the same time, their extraordinary poems signal an increasingly harsh repudiation of Christianity’s sacred symbols and beliefs. They reveal a complex relationship to Christian culture as Jews internalized elements of medieval culture even while expressing a powerful revulsion against the forms and beliefs of Christian life.


This gracefully written study crosses traditional boundaries of history and literature and of Jewish and general medieval scholarship. Focusing on specific incidents of persecution and the literary commemorations they produced, it offers unique insights into the historical conditions in which these poems were written and performed.

"An impressive examination of the character and function of the poetry of martyrdom commemorating Jews who perished at the hands of their Christian countrymen. . . . Cogent, clearly argued, and inclusive in contextualizing historic, social, cultural, and political materials.... An excellent scholarly work."—Choice

"Einbinder should be congratulated . . . for giving this material its long overdue attention and for generating further debate. No longer sidelined, Einbinder's 'patient poetry' has at last found a sympathetic interpreter."—Rebecca J.W. Jefferson, Journal of Jewish Studies

"A serious work, attentive to nuanced meanings and readings of primary sources. Students of interdisciplinary studies will find something of merit in this affecting study."—Stephen D. Benin, Religious Studies Review

"Susan Einbinder's impressively researched and movingly written book opens a window on a world that not too many medievalists are familiar with: that of the poetic commemoration of Jewish suffering in medieval France."—Renate Blumenfeld-Kosinski, Speculum

"Einbinder uses very impressive tools, and her work is on the cutting edge in Jewish studies. I know of no other book in English that takes this poetry so seriously or that is as successful in integrating the literary, historical, and religious dimensions of the poems."—Marc Saperstein, George Washington University

"Einbinder approaches her subject beautifully and is always aware of the interplay of poetry and history. This is an interdisciplinary work of the first order—one that reads poetic texts as historical texts embodying the changing and developing attitudes of a community. Its subtle analysis also illuminates the complex interaction of Christianity and Judaism."—Thomas Head, Hunter College and The Graduate School, City University of New York