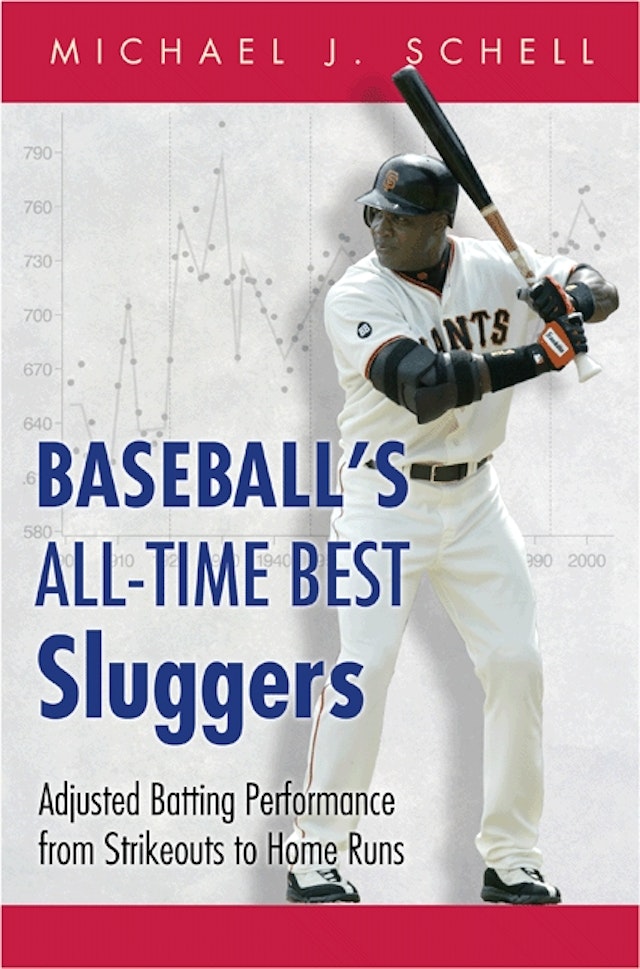 Over baseball history, which park has been the best for run scoring?1 Which player would lose the most home runs after adjustments for ballpark effect?2 Which player claims four of the top five places for best individual seasons ever played, based on all-around offensive performance.3 (See answers, below).

These are only three of the intriguing questions Michael Schell addresses in Baseball’s All-Time Best Sluggers, a lively examination of the game of baseball using the most sophisticated statistical tools available. The book provides an in-depth evaluation of every major offensive event in baseball history, and identifies the players with the 100 best seasons and most productive careers. For the first time ever, ballpark effects across baseball history are presented for doubles, triples, right- and left-handed home-run hitting, and strikeouts. The book culminates with a ranking of the game’s best all-around batters.

Using a brisk conversational style, Schell brings to the plate the two most important credentials essential to producing a book of this kind: an encyclopedic knowledge of baseball and a professional background in statistics. Building on the traditions of renowned baseball historians Pete Palmer and Bill James, he has analyzed the most important factors impacting the sport, including the relative difficulty of hitting in different ballparks, the length of hitters’ careers, the talent pool from which players are drawn, player aging, and changes in the game that have raised or lowered major-league batting averages.

Schell’s book finally levels the playing field, giving new credit to hitters who played in adverse conditions, and downgrading others who faced fewer obstacles. It also provides rankings based on players’ positions. For example, Derek Jeter ranks 295th out of 1,140 on the best batters list, but jumps to 103rd in the position-adjusted list, reflecting his offensive prowess among shortstops.

Michael J. Schell is Professor of Biostatistics at the University of North Carolina and Director of the Biostatistics Core Facility in the Lineberger Comprehensive Cancer Center. He is the author of Baseball's All-Time Best Hitters: How Statistics Can Level the Playing Field (Princeton).

"Baseball fans, ever fascinated with statistics, should enjoy rifling through this information-packed work."—Library Journal

"Michael J. Schell has produced what may be the most rigorous effort yet to compare baseball players from various eras. And in the process, he has offered a tantalizing suggestion that steroids may not have affected the game as much as many people assume."—Christopher Shea, The Boston Globe

"The way these things work, I don't suppose that Michael Schell's book will be the final word on ranking hitters. What I do know is that anybody who wants the final word will have to read this book first. And that will be the easy part."—Rob Neyer, ESPN.com

"Michael Schell has expanded on his original study of Baseball's All-Time Best Hitters to include all aspects of batting. He has written a well thought out and soundly based book, taking into account sophisticated time, age, park and positional adjustments to reach valid conclusions. There is plenty of math, but it is not necessary to understand the intricacies of the equations to appreciate the results."—Pete Palmer, co-editor of The Baseball Encyclopedia (with Gary Gillette) and co-author of The Hidden Game of Baseball (with John Thorn)

"Some say it's impossible to compare hitters from different eras. In this book, Michael Schell meets that challenge head-on, using modern statistical methods to adjust for differences in eras, ballparks, and the level of competition. It may not settle every argument about the game's best all-time hitters, but it's sure to raise the quality of those arguments."—Tom Tippett, Principal Designer, Diamond Mind Baseball

"Well-written and organized. Baseball's All-Time Best Sluggersstrikes the right balance between the statistical lingo of the professional statistician and the more familiar verbiage of baseball books."—Daniel Levitt, co-author, with Mark Armour, of Paths to Glory: How Great Baseball Teams Got That Way

"A significant contribution to the sabermetrics field. This book will be a fun read for any baseball fan."—Jim Albert, Bowling Green State University.

"Everyone knows that batting .300 in the major leagues is much harder than batting .300 in the minors. Although baseball rules and equipment change over time and parks differ, such differences in difficulty are ignored regularly by those who compare batters who played in different decades and/or in different stadiums. Michael Schell has painstakingly made the needed adjustments for eras, for park factors, for players' ages, and for variability in performances, so as to determine which batters really have been most dominant. There are many other treasures to be found here, and many methodological lessons to be learned and enjoyed by baseball enthusiasts and by those who think about player evaluations."—Carl Morris, Harvard University