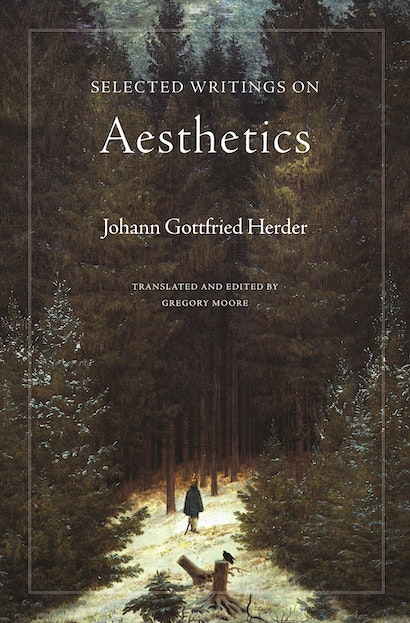 A seminal figure in the philosophy of history, culture, and language, Johann Gottfried Herder (1744-1803) also produced some of the most important and original works in the history of aesthetic theory. A student of Kant, he spent much of his life striving to reconcile the opposing poles of Enlightenment thought represented by his early mentors. His ideas influenced Hegel, Schleiermacher, Nietzsche, Dilthey, J. S. Mill, and Goethe.


This book presents most of Herder’s important writings on aesthetics, including the main sections of one of his major untranslated works, Kritische Wälder (Critical Forests). These notes, essays, and treatises, the majority of which appear here in English for the first time, show this idiosyncratic thinker both deeply rooted in the controversies of his day and pointing the way to future developments in aesthetics. Chosen to reflect the extent and diversity of Herder’s concerns, the texts cover such topics as the psychology and physiology of aesthetic perception, the classification of the arts, taste, Shakespeare, the classical tradition, and the relationship between art and morality.


Few thinkers have reflected so sensitively and productively on the cultural, historical, anthropological, ethical, and theological dimensions of art and the creative process. With this book, the importance of aesthetics to the evolution and texture of Herder’s own thought, as well as his profound contribution to that discipline, comes fully into view.

Gregory Moore is Lecturer in German at the University of St. Andrews. He is the author of Nietzsche, Biology and Metaphor, and is coeditor of Nietzsche and Science.

"Herder, a major figure in 18th-Century Germany's burgeoning studies in aesthetics, is here given ample scope on which to base critical judgment. Moore's Johann Gottfried Herder presents excerpts from some of Herder's most important writings, much of it translated into English for the first time. An important contribution to our knowledge of the history and origins of aesthetics."—Art Times

"These excellent translations make some of Herder's most original and important contributions to aesthetics available to English readers for the first time."—Choice

"To read [Herder] in this superb compilation is to encounter a vivid presence, one whose fingertips still seem fresh from the touch of truth."—Eric Ormsby, New York Sun

"I would strongly recommend scholars and librarians to acquire this important volume. It will be particularly useful in courses on eighteenth-century aesthetics for students without a command of German. Its readers will have the opportunity to discover an aesthetic thinker of the stature and originality of Lessing and Diderot."—K. F. Hilliard, Modern Language Association

"Only a small fraction of Herder's writings has been translated into English, and such translations are often archaic and/or unreliable. I know of no previous translation of the Critical Forests, for example, although the first and fourth parts, which appear in the present volume, are of major interest to students of aesthetics. With Selected Writings on Aesthetics, these and other texts by Herder are now accessible to readers of English, through the pen of a translator who exhibits clarity and elegance of style."—Hugh Barr Nisbet, University of Cambridge

"This much-needed book brings into English a philosopher severely underrepresented in this language, yet of paramount importance to any adequate understanding of the late eighteenth century in Germany and indeed of the rest of Europe."—Robert E. Norton, University of Notre Dame

"This collection provides translations of the most important aesthetic writings of Herder, a crucial, original thinker in the field of aesthetics, an important influence on later German philosophy, and a writer whose significance has also been acknowledged by such recent thinkers as Isaiah Berlin and Charles Taylor. Even advanced scholars sometimes find a translation useful for such a difficult writer, and some of the writings translated here, such as Critical Forests, are not very easily found even in German."—Michael Inwood, Trinity College, Oxford

"This is a timely translation because Herder's importance is more apparent than ever and his work is undergoing a significant revaluation."—Cyrus Hamlin, Yale University