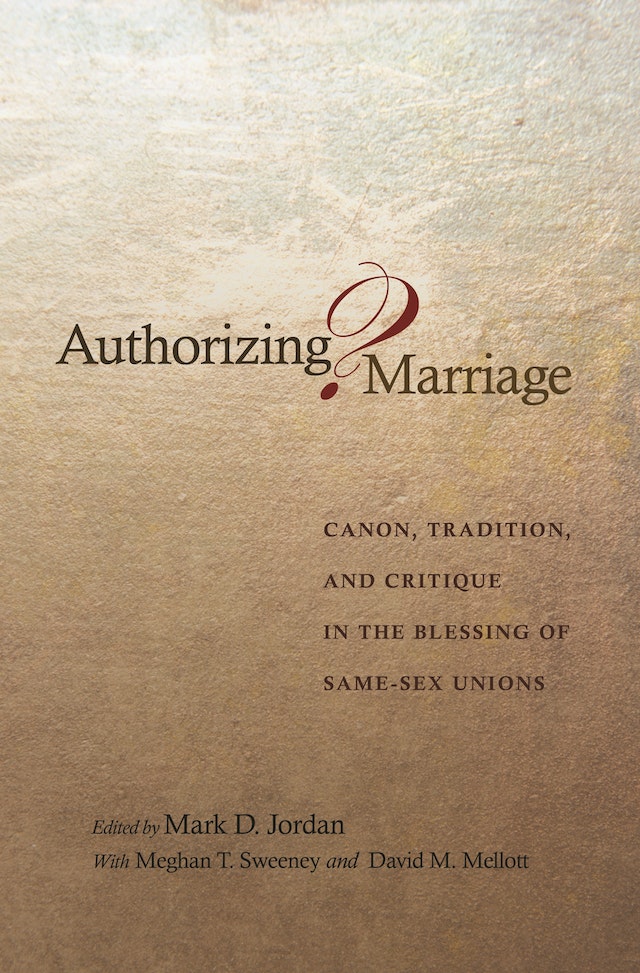 The opponents of legal recognition for same-sex marriage frequently appeal to a “Judeo-Christian” tradition. But does it make any sense to speak of that tradition as a single teaching on marriage? Are there elements in Jewish and Christian traditions that actually authorize religious and civil recognition of same-sex couples? And are contemporary heterosexual marriages well supported by those traditions?

As evidenced by the ten provocative essays assembled and edited by Mark D. Jordan, the answers are not as simple as many would believe. The scholars of Judaism and Christianity gathered here explore the issue through a wide range of biblical, historical, liturgical, and theological evidence. From David’s love for Jonathan through the singleness of Jesus and Paul to the all-male heaven of John’s Apocalypse, the collection addresses pertinent passages in the Hebrew Bible and the New Testament with scholarly precision. It reconsiders whether there are biblical precedents for blessing same-sex unions in Jewish and Christian liturgies.

The book concludes by analyzing typical religious arguments against such unions and provides a comprehensive response to claims that the Judeo-Christian tradition prohibits same-sex unions from receiving religious recognition. The essays, most of which are in print here for the first time, are by Saul M. Olyan, Mary Ann Tolbert, Daniel Boyarin, Laurence Paul Hemming, Steven Greenberg, Kathryn Tanner, Susan Frank Parsons, Eugene F. Rogers, Jr., and Mark D. Jordan.

Mark D. Jordan is Asa Griggs Candler Professor of Religion at Emory University. He is the author of Telling Truths in Church and Blessing Same-Sex Unions: The Perils of Queer Romance and the Confusions of Christian Marriage.

"A convenient sampling of views and interpretations that raises the level of discourse on this controversial public issue. A useful and thoughtful piece of work."—Rachel Adler, Hebrew Union College, Jewish Institute of Religion